I had hoped to do some pre-race posts about the route I was planning, the kit I was taking and the bike I had tricked out for racing but time caught up on me and the next thing I knew I was on a plane to Belgium. I had no real intention to create a daily diary, it just happened through a need to tell people what was happening and also a efficient way to communicate to family and friends how I was doing. I thought I’d expand a bit on my daily diaries, making edits for my often delirious post-ride ramblings while also adding some of the sights I captured along the way. 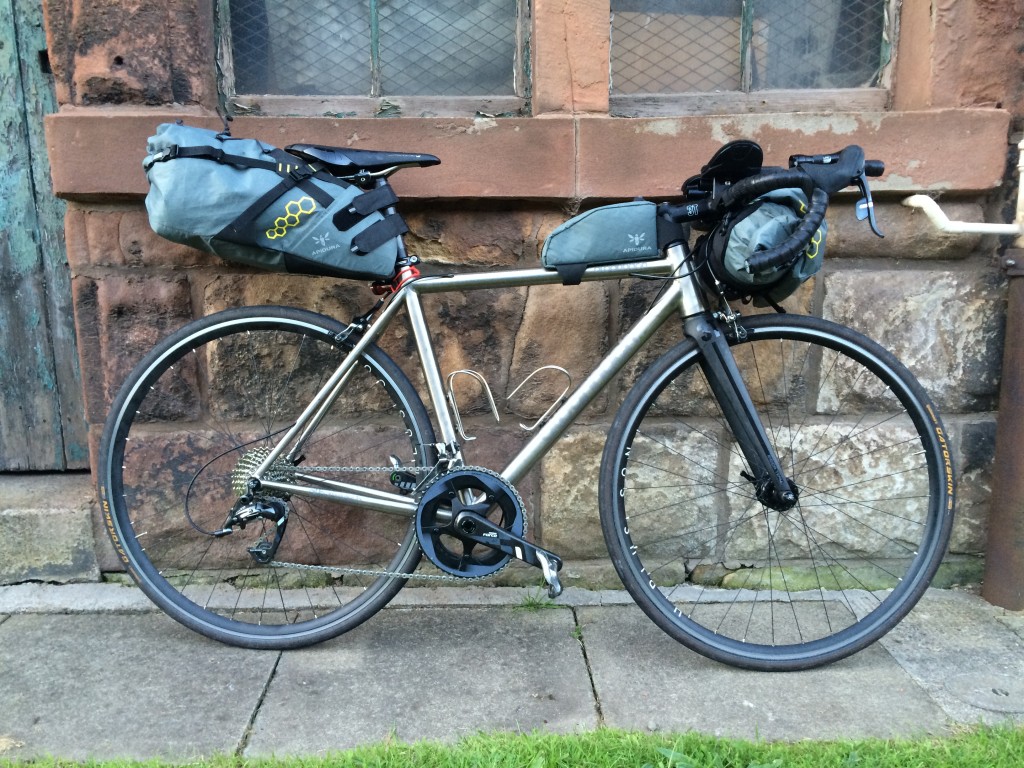 The race kicked of with a lap of the Kapelmuur in Geraardsbergen at midnight. I’d left Glasgow at 3am the same day to get to Geraardsbergen in time for the start, so come the start I was 22hrs awake save a hour lie down in the registration hall. I remember hitting the cobbles, once the race had started after the neutralised lap of Geraardsbergen, full of adrenaline and my inner ‘cross took over. I smashed it without a single care to the potential for damages. I rode off into the night very excited about what was about to happen over the next two weeks. The evening was pleasant and the roads car-quiet, cycle-busy. Everything was going well until about 50km in when my front light died.  No bother, I’ve a very fancy and expensive dynamo hub and USB port for such device charging. It wasn’t working. I tried all my devices through the dynamo + USB, nothing responded. I’d like to say it didn’t faze me at the time but I’d be lieing. I’m pretty sure I sent Tim a wobble-text “a cannae do this man, my dynamo is gubbed”,  to which he calmly responded “you’re tired, it’ll be really obvious in the morning, wait til you get some daylight, get some rest”. He was right but I was feeling surprisingly fresh so I just pulled out my iPhone and used the torch while riding with one hand. I kept riding til about 5am when the rains came so I took shelter in a knackered chicken shed, bivvy slept on a pallet for 2 luxury hours and cracked on at 7am.

I did have a crack at fixing the connections but it was pinging it down so I didn’t tinker around too much that morning. It wasn’t until I got to Reims did I have another go at fixing it, still nothing. This wasn’t the best of starts to a 14 day unsupported bike race across Europe. A few hours later my Garmin died, so I then had to rely on my phone for navigation [checks phone for battery – 30%]. So to make sure I got to my first planned destination I started turning the phone off after I memorised the roads and towns ahead to navigate to. This bought me a few more hours. Lucky for me there’s only a couple of roads to Arcis-sur-Aube (my planned destination) from Reims. I met up with my boy, Tim Pulleyn in Châlons-en-Champagne to a brotherly embrace of mates that had not seen each other for weeks (it was 16hrs) for a supermarche lunch (whole baguette + packet of ham + block of cheese). We cursed what we had got ourselves into and we decided to crack onto Troyes. My thinking was that I’d have a better chance of getting a hostel/hotel there than Arcis-sur-Aube. I needed to charge devices. We got to Troyes, smashed a calzone and found some accommodations, 326km ridden 42hrs awake. Strangely, I was enjoying it deeply.

The hotel stay hadn’t been as useful as I hoped. I got into the hotel, planning to charge my iPhone, Garmin and lights. I set alarms through the night to wake me up so that I could change devices (as I only had one adaptor). Instead I woke up at 5am with a fully charged Garmin having slept through all my alarms. At least I had some form of navigation for today and a get bit of rest. I boosted out of Troyes hoping to grab some breakfast at a boulangerie but nothing was open. I didn’t think much of it, it was 5ish in the morning. I cracked on for a few hours and still nothing open, and then I realised it was Sunday. So the second day, I’m about to set off for 300+km ride, I’ve no phone to be contacted at, I’ve no lights to ride into the night with, I’ve no food for the day ahead. This is pretty much the standard to expect if going on cruisy road ride with me back home though less than ideal for a 4000km race across Europe. What had a naïvely signed up for?

Luckily I found I had a quarter sweaty chesse baguette in my jacket pocket and three Haribo crocs lurking in my front pouch. A breakfast of champions to keep me going until I worked out a plan. I wanted to get to Dijon that afternoon for a decent drop of lunch and a charge up, it was 150km away. 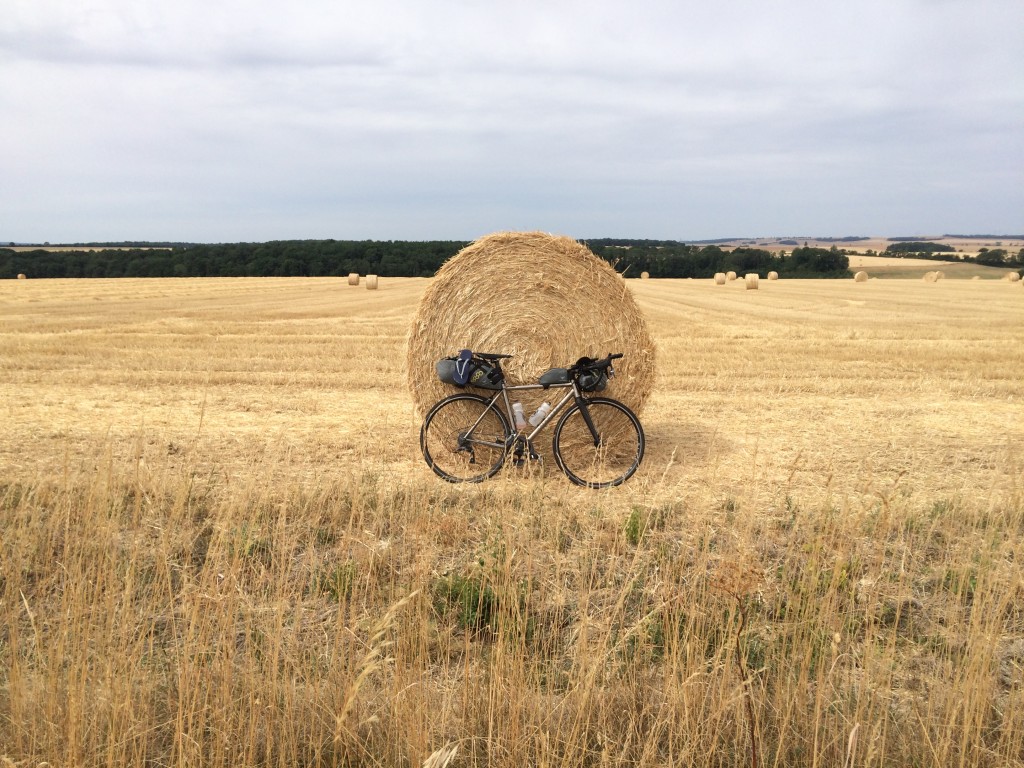 A pretty standard view for the first few days, km upon km of rolling fields.

As you’d imagine my legs were pretty stiff that morning, I was suffering the start of some killer saddle sores and niggles in my knees and Achilles heel. Though after a good two hours of pedalling in an almost hypnotic state I was totally free of pain. On a empty stomach I was strangely feeling good and caught up to #24 Chris White for a wee bit and then the #88 Christian Ekdahl and #71 Francis Ransley. It was only Day 2 and it wasn’t like I hadn’t seen anyone for days but the lift you get from meeting fellow racers along the way is so good for morale. The camaraderie at this event was like nothing I’ve ever experienced. Clearly everyone is a wee bit crazy but everyone I met was great fun too. I rode with Christian and Francis to Dijon for lunch and then headed out on my own towards Châlons-en-Champagne where I had planned to meet Tim for some dinner. Even after a good feed in Dijon I was seriously tired so I heeded the wise advice of #102 Paul “30 minutes kip mate” Alinejad and took some shelter in a roadside shrine, sorry Jesus. 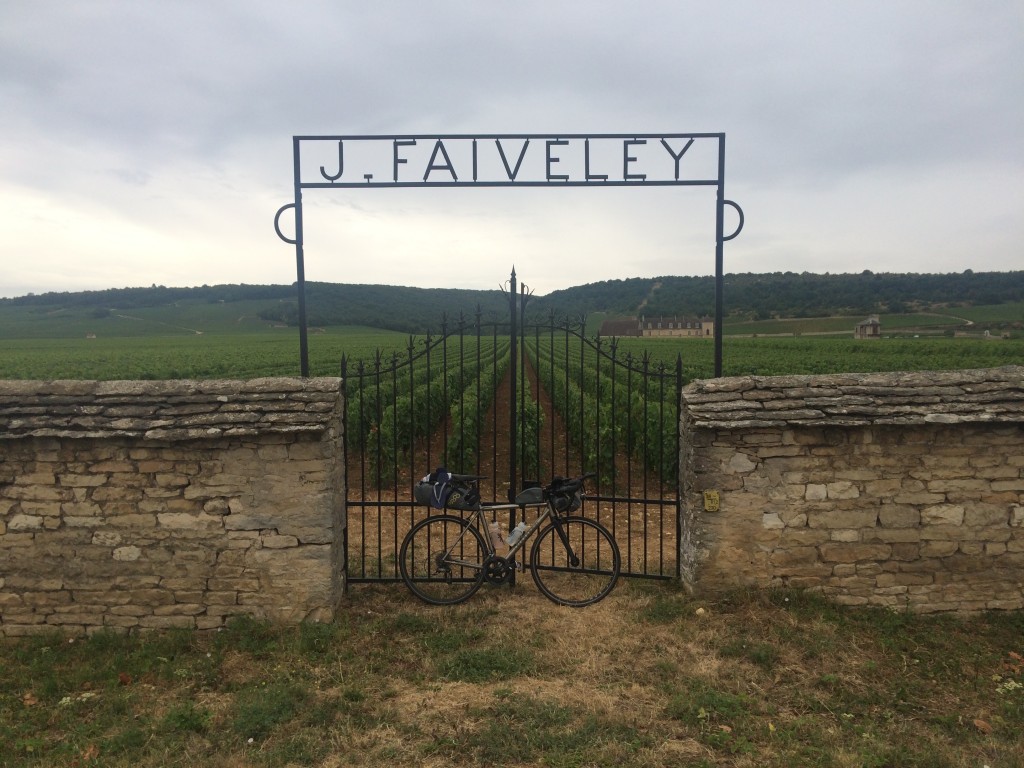 The grand entrances of Burgundy vineyards

Tim was a wee bit behind which meant I was in Châlons for a lot longer than planned but it turned out to be a bit of a godsend in that I got a chance to charge up devices again. Stupidly I hadn’t thought to give my front light a bit of a boost as it was getting dark, instead I smashed up Instagram til Tim arrived; what a fud. Off into the night we rode and bivvyed in what I can only describe as an abandoned semi-built super mansion, marble floors, no windows or doors.

I woke up in Mâcon having not actually been fisted by Andre the Giant but, ye ken, it felt like it. I’d ridden just over 600km in two days. Before getting to Belgium i’d never ridden more than 200km, never mind 300km and certainly not day after day. As I rode out from our marble campsite I could barely sit in the saddle but it was a beautiful morning and I was excited to hit the mountains after French vineyard upon French vineyard.

To get to Bédoin there is a straight line route over a national park. Everyone I met the days before had said they were going that way. Though the more direct route I knew this would be much more difficult than my longer route hugging the Rhône before heading east to Mont Ventoux.  After I got over my initial morning niggles, I was flying. 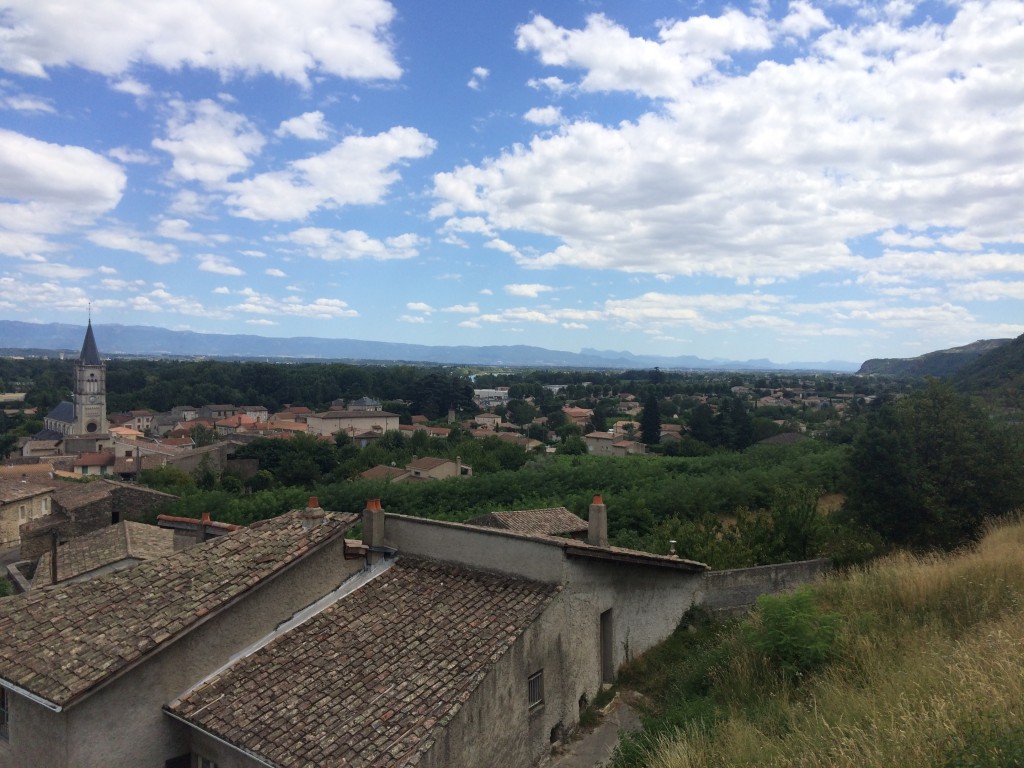 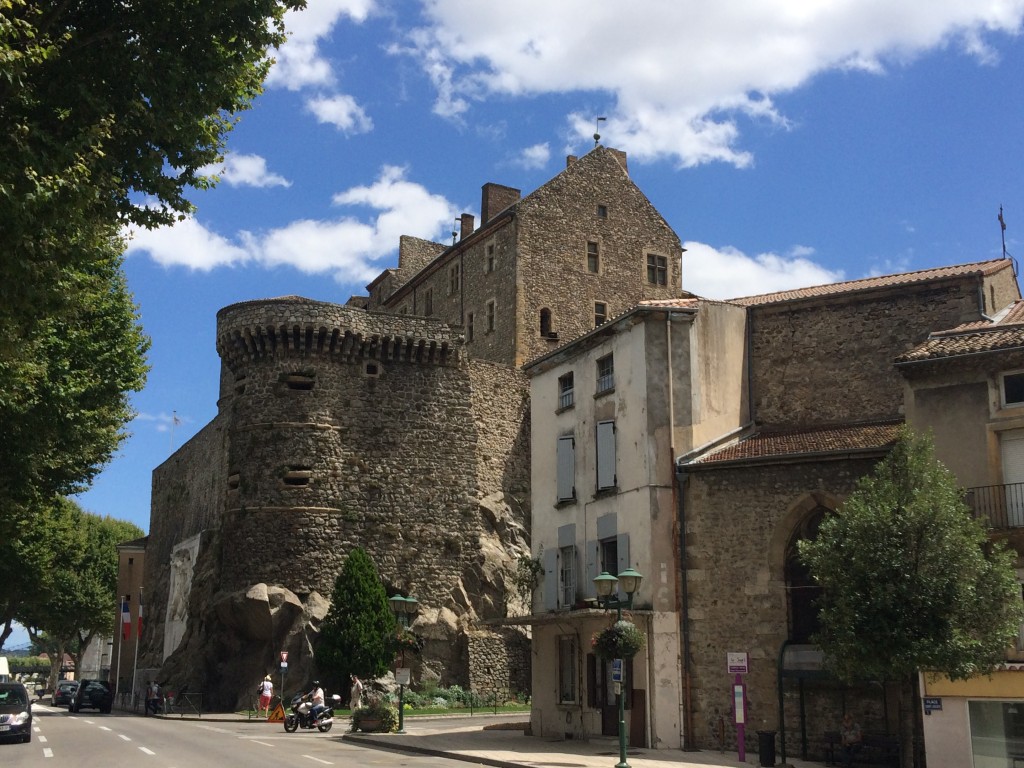 Tournon-sur-Rhône reeks of the Auld Reekie

I had a tail wind too so that bit from Mâcon to Donzere was great fun. Supplenmented too by my first day of free road food, peaches on peaches. It was though, hot as baws, and being Monday, the French are on holiday so water stops where hard to find. Turning East for Bedoin I got the real tail wind and motored on hoping for a room in Bedoin to charge devices and wash kit. 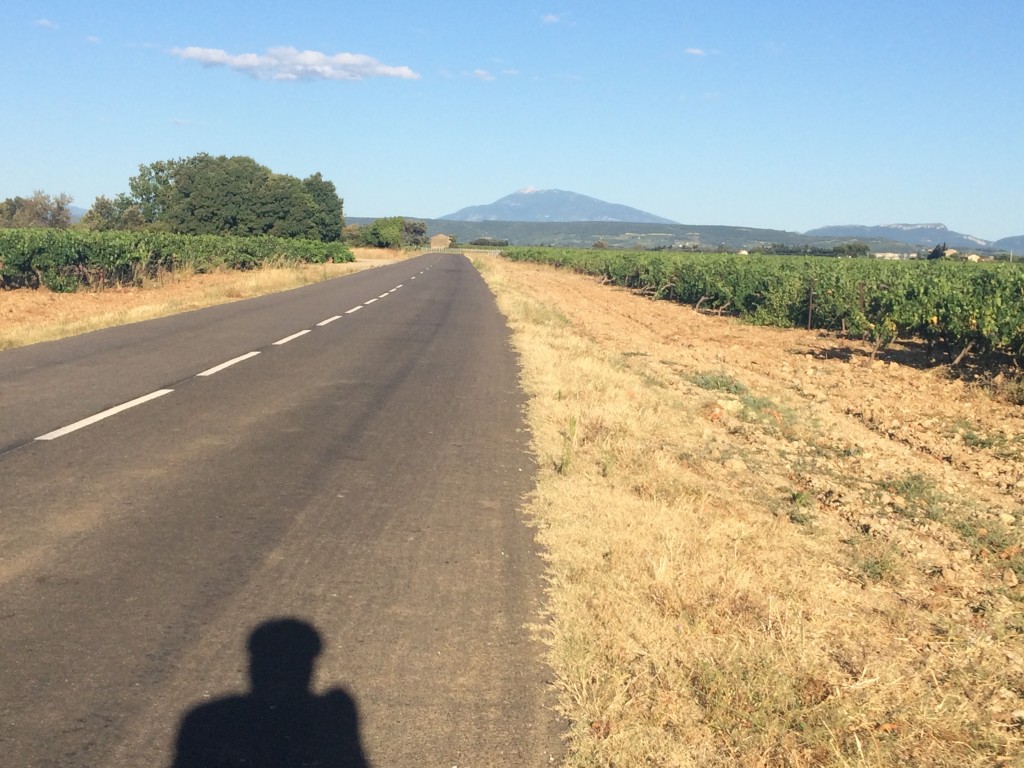 The Giant of Provence from Sainte-Cécile-les-Vignes

When disaster struck, I left my only means of charging in the last place I ate. So by the time I arrived in Bédoin I’d no light, no Garmin and the iPhone was down to the last few %. I met up with Paul, Francis and #73 Martin Cox who were smashing pizzas pre-Ventoux. I was feeling pretty down about my recent loss and with no rooms in town I thought, “f%ck, it, let’s do VentouX”.  So with over 300 km in the legs I took to the Giant of Provence with my trusty and safe iPhone torch as the provider of night sight. I rode with iLight mixed with moonlight to the nearest refuge about half way up and took the best nights sleep of the trip so far. 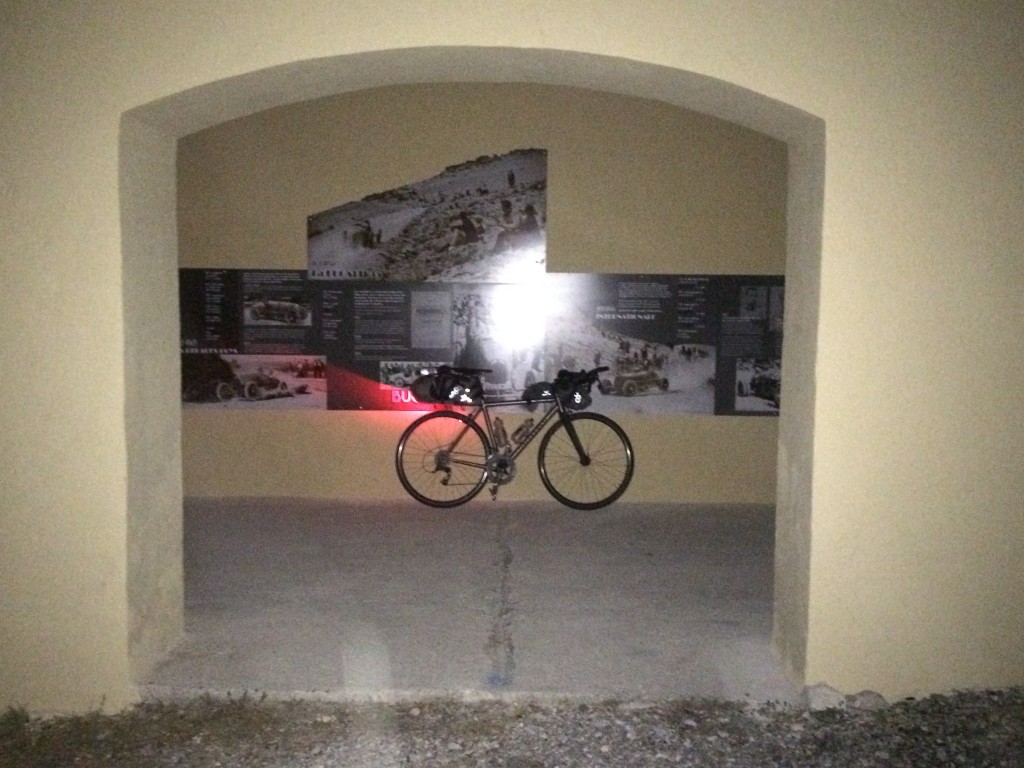 Half way up the Ventoux I cracked on at dawn to the chorus of my chipmunk refuge mates. For those that have never been up Mont Ventoux, it is quite spectacular. The Ventoux is on the south west edge of the French Alps. It towers over Provence and is actually really intimidating as you approach it. The initial climb feels quite easy but as you climb into the forest it really kicks up. The smell is also really unique, that morning there was a strung heady aroma of lavender and pine. No wonder Rapha based their skincare around that scent. Coming out of the forest you are around half way up and the landscape changes dramatically to an almost lunar landscape of bright rock, it’s also very windy, clearly a good spot for a weather station. The weather station stands proud at the summit like a glorious siren enticing you home. I think I arrived around 6-7ish with the sun coming up over the ridge. It was really special. 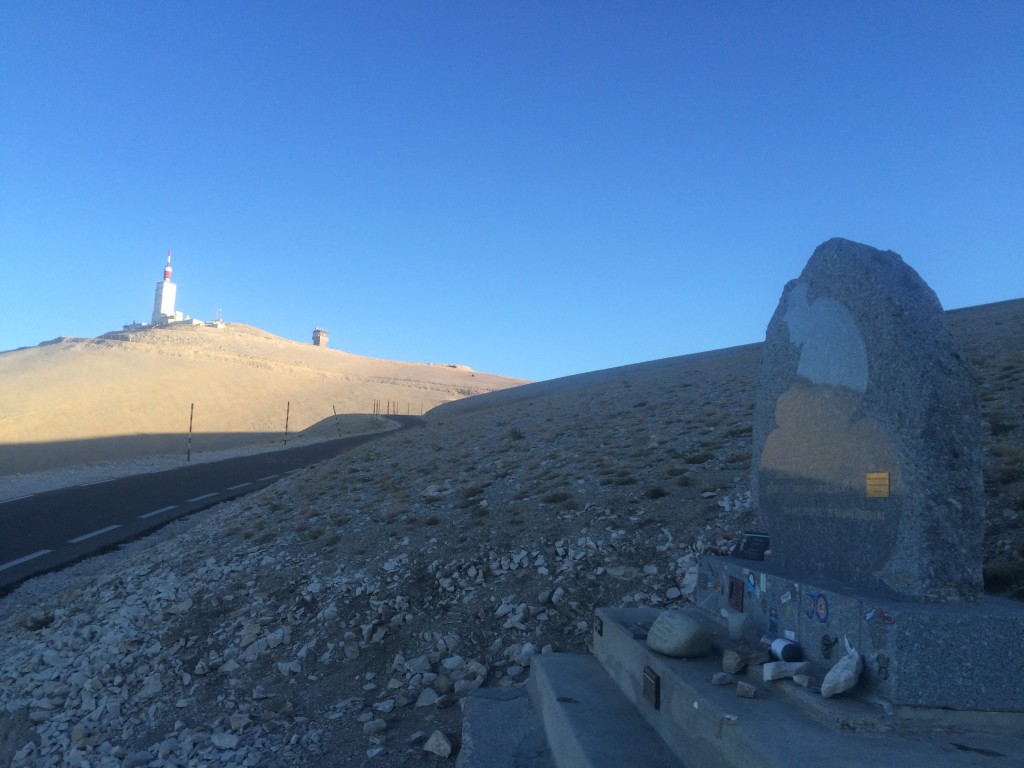 The weather station and Tommy’s memorial 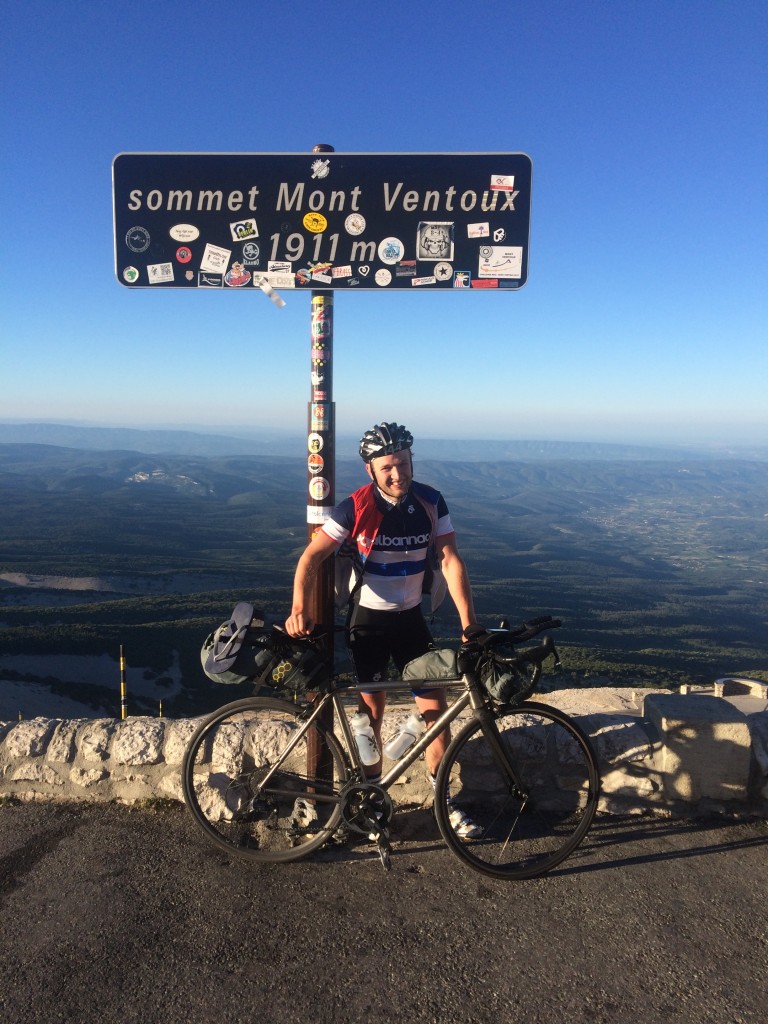 One thing TCR has taught me so far is that however shite things might seem, it can get worse and yes, you can still deal with it.  I had no electronics by this point, I just went old school and bought a map instead. After Ventoux I met up with Christian and Paul who were cracking into a buffet breakfast in Aurel, a really beautiful wee town in the mountains. We were bathed in morning sunshine and the coffee was flowing. The good life found a way. We rode together that morning over Col de Macuegne and down through Gorges de la Méouge. Today was why I came on the Transcontinental, this part of the world is utterly stunning and some of the best riding i’ve ever been on. It was great also to ride with Christan and Paul, it wasn’t like we were drafting it was more for company and it was so welcome. 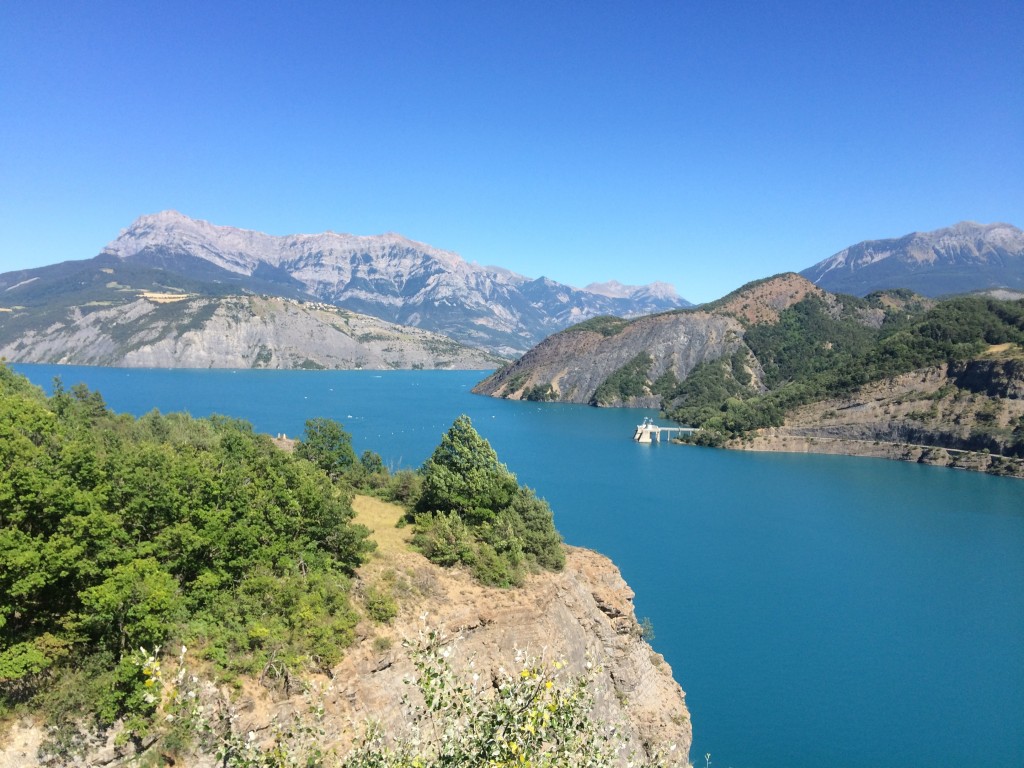 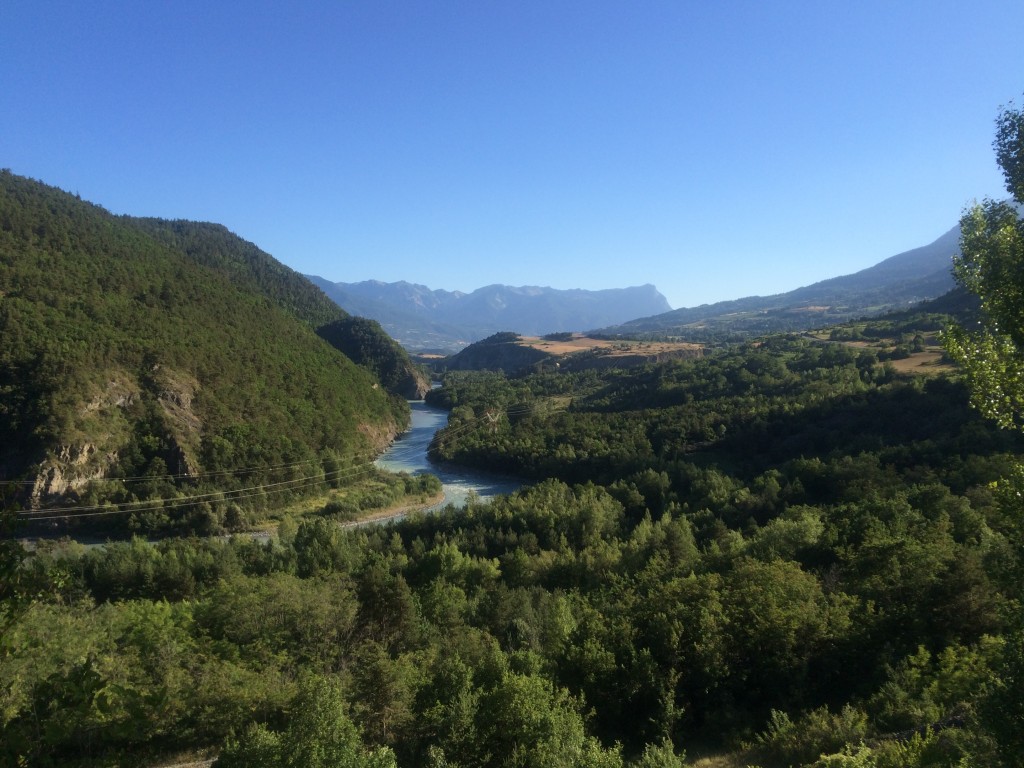 I got Tallard for lunch and managed to ‘borrow’ a USB to Euro plug for some essential charging. I wee accidental detour took me over and Col Lebraut so it was a climby day but absolutely stunning. Then came the long drag to Briançon. I had planned to get to Sestriere but for the lack of a hotel the previous night to recharge/reclean I stayed down at Briançon losing 30km on my planned finish, no bother that’ll just be s quick nip up the valley right? 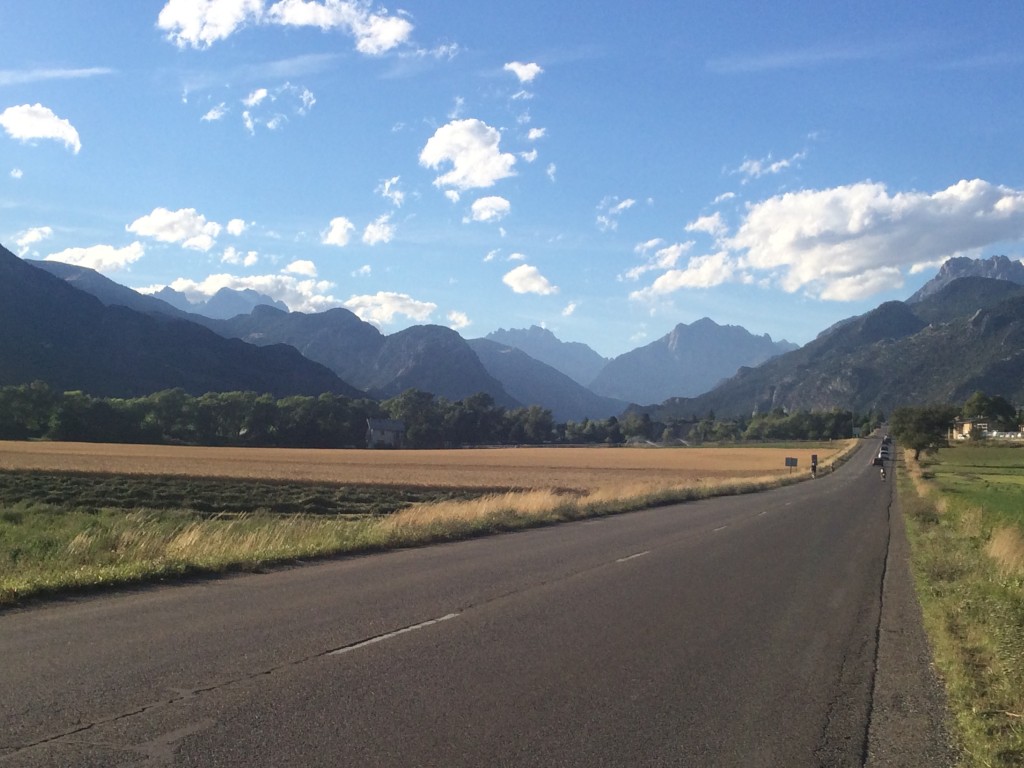 Galibier and pals on the way to Briançon