This was meant to be a quick nip over to Susa then smash it along the flat lands east to Slovenia. I was feeling very stiff and sore that morning so post my doppio doppio (two espresso, two pain au chocolat) I smashed some painkillers and for the first time since the start on the Muur I had full power so I afforded my self some beats for the early morning ascent to Sestriere. Run The Jewels + amazing scenery + painkiller bliss + doppio doppio + company from the very excellent #42 – Zbynek Simcik made for an excellent high when I reached CP2. Two Cols smashed, I fired into the buffet breakfast put on at CP2. 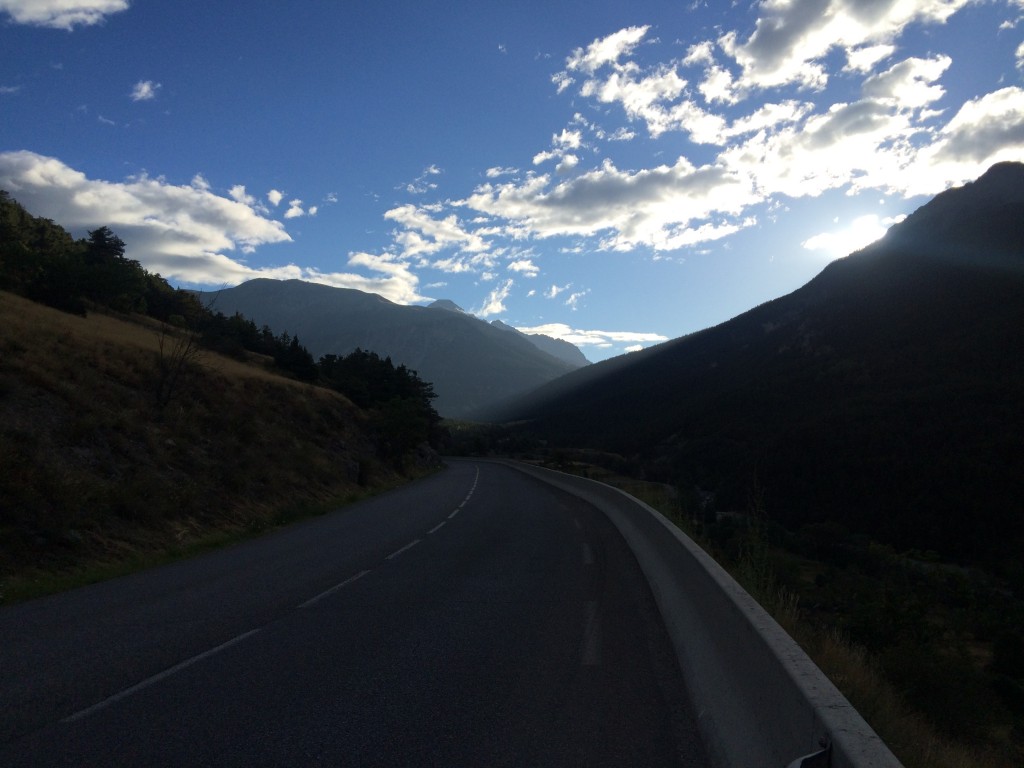 On route to Col de Montgenèvre 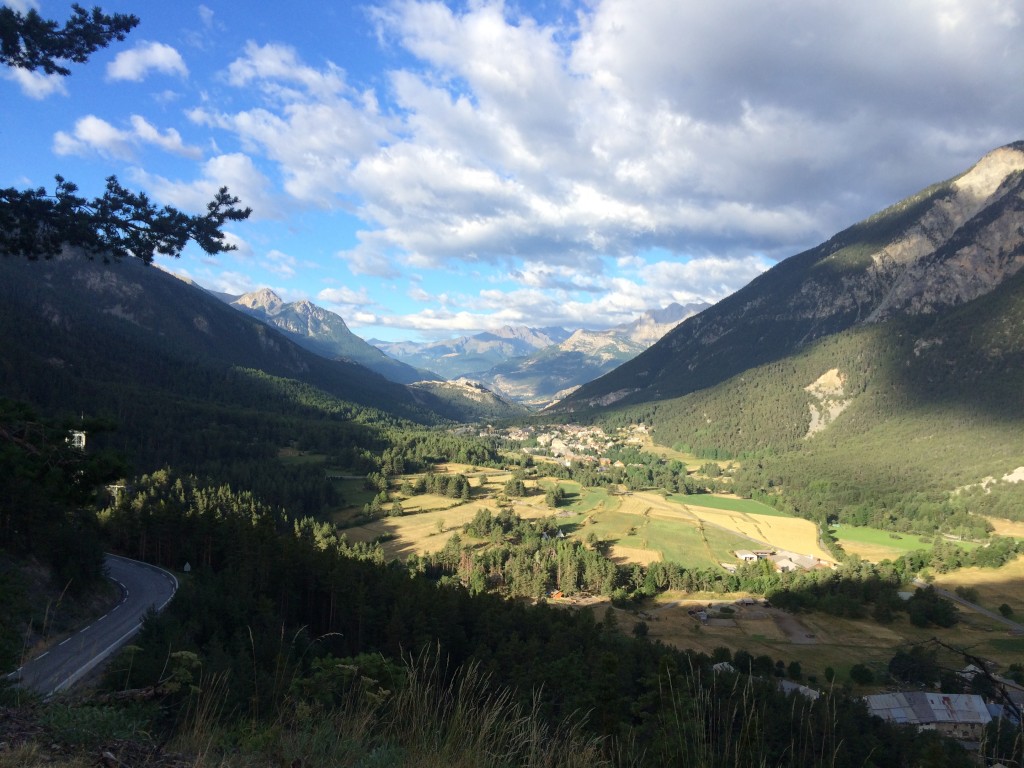 The eastern edge of Briançon from Col de Montgenèvre

This was then made even better by Strada della’Assietta, a gravel mountain road (which to be honest doesn’t really serve much purpose apart from being AMAZING) connecting Sestriere to the Colle delle Finestre. I loved it, I heard a lot of people complained about this part of the race due to all the punctures they were getting. I got a puncture too, I didn’t care because it was just incredible. A side note to this is that it is now my firm belief that ‘gravel’ bikes are a total nonsense. I smashed 40km of gravel ascent/descent repeat on my Albannach RATHAD, a road bike, with racing geometry and 25mm tyres. Race cross, ride cross. Race road, ride road. Race gravel, ride whatever you like, there is no need for a specific gravel machine. Some fine examples of the terrain the RATHAD bossed below. 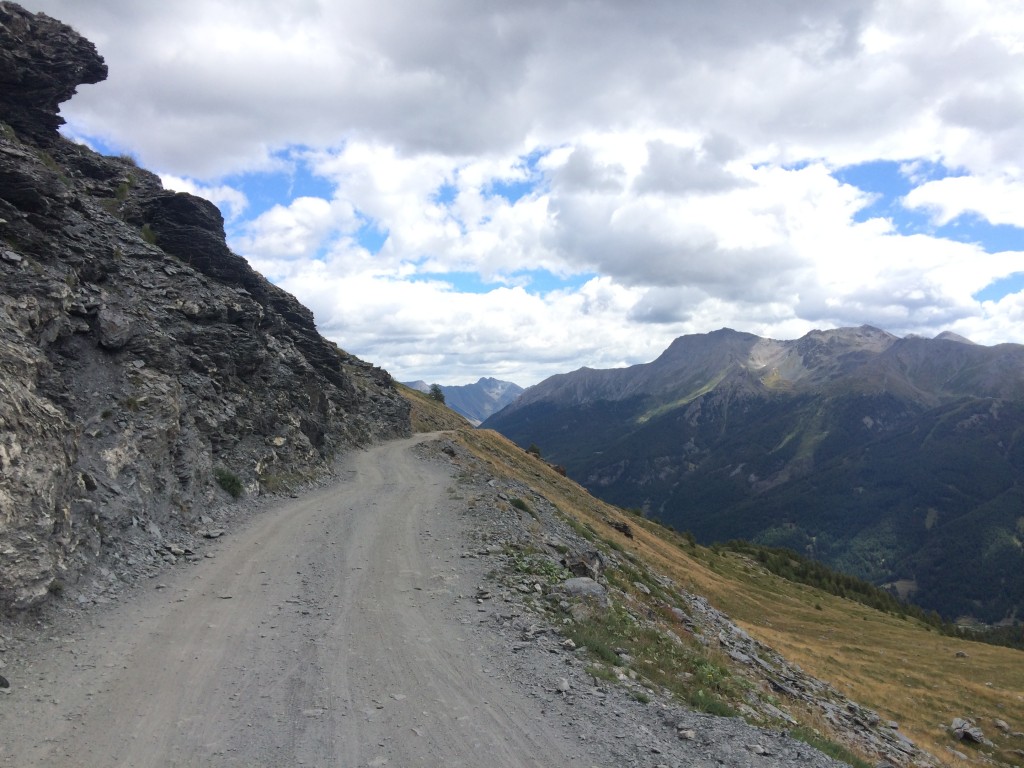 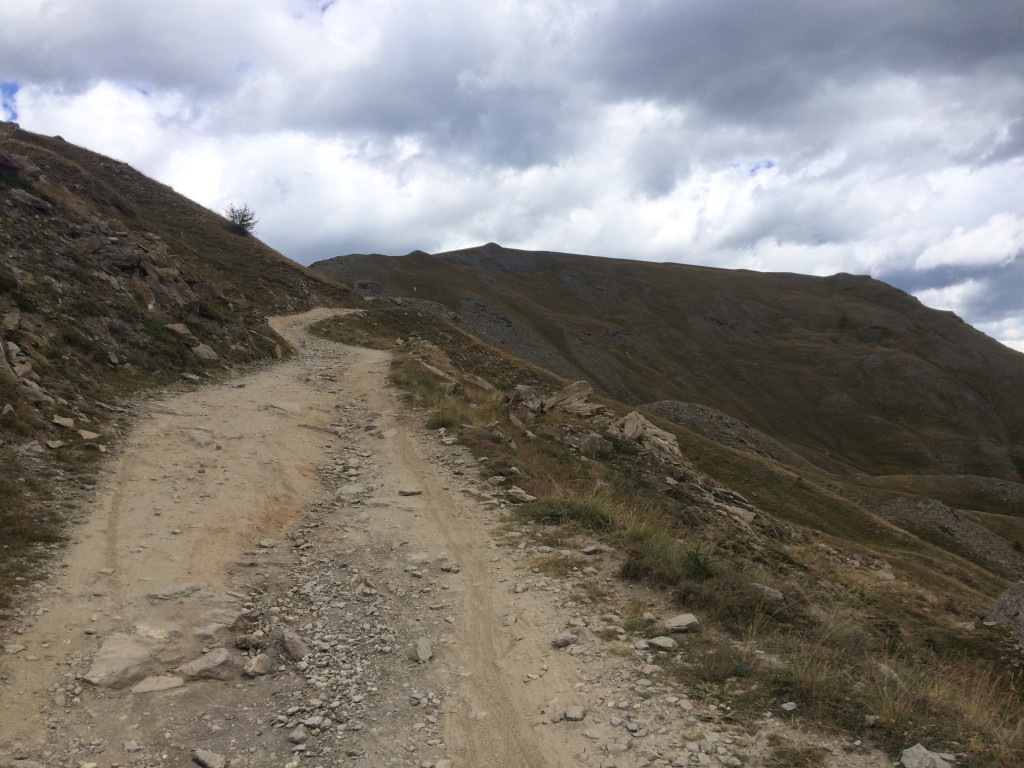 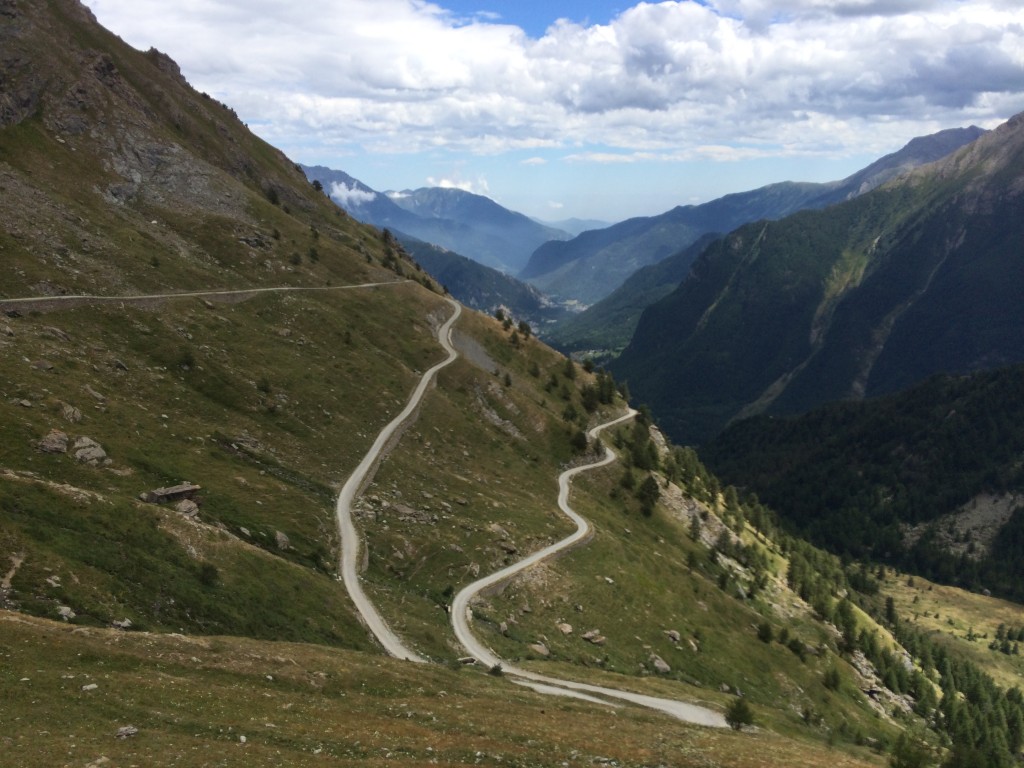 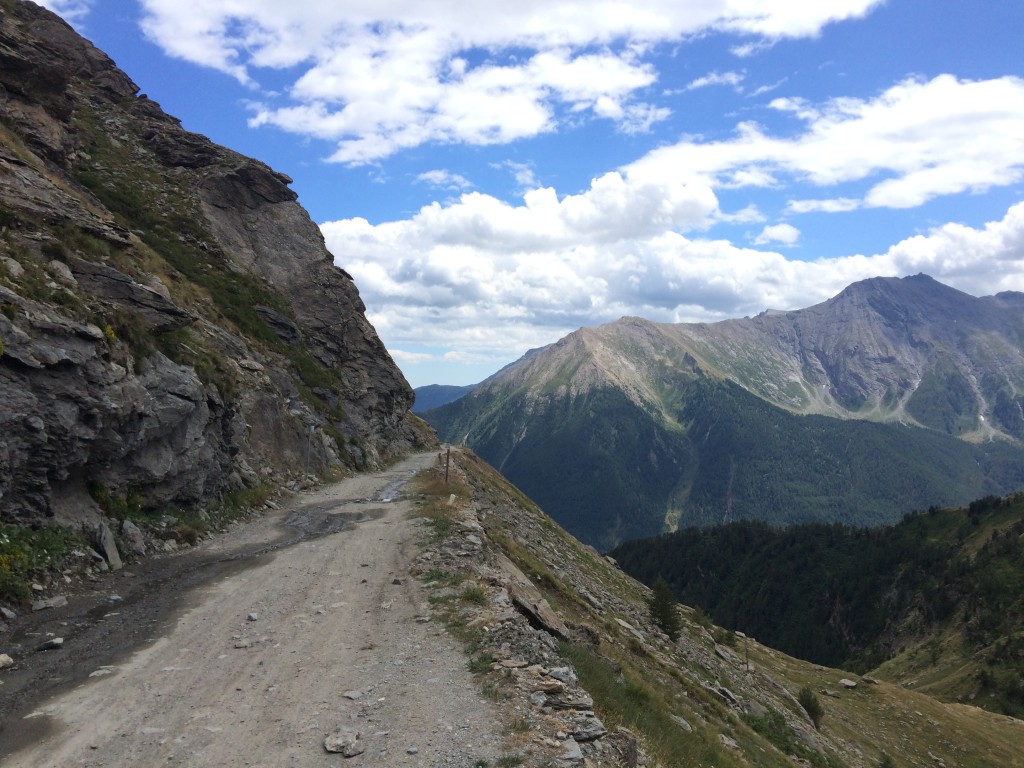 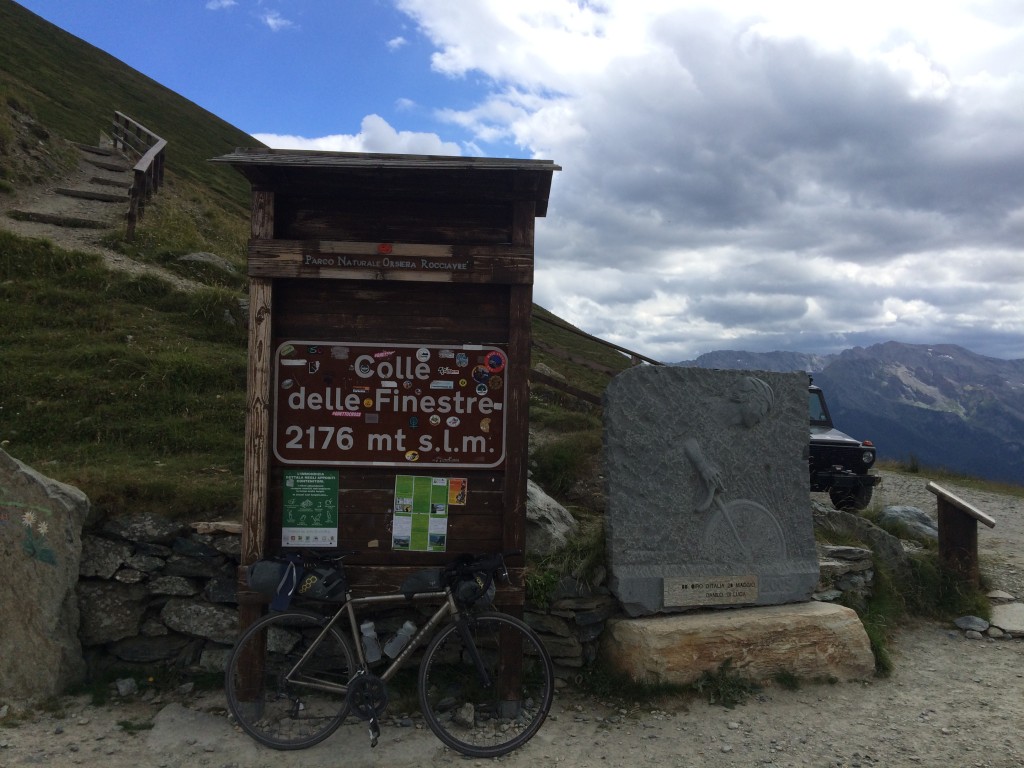 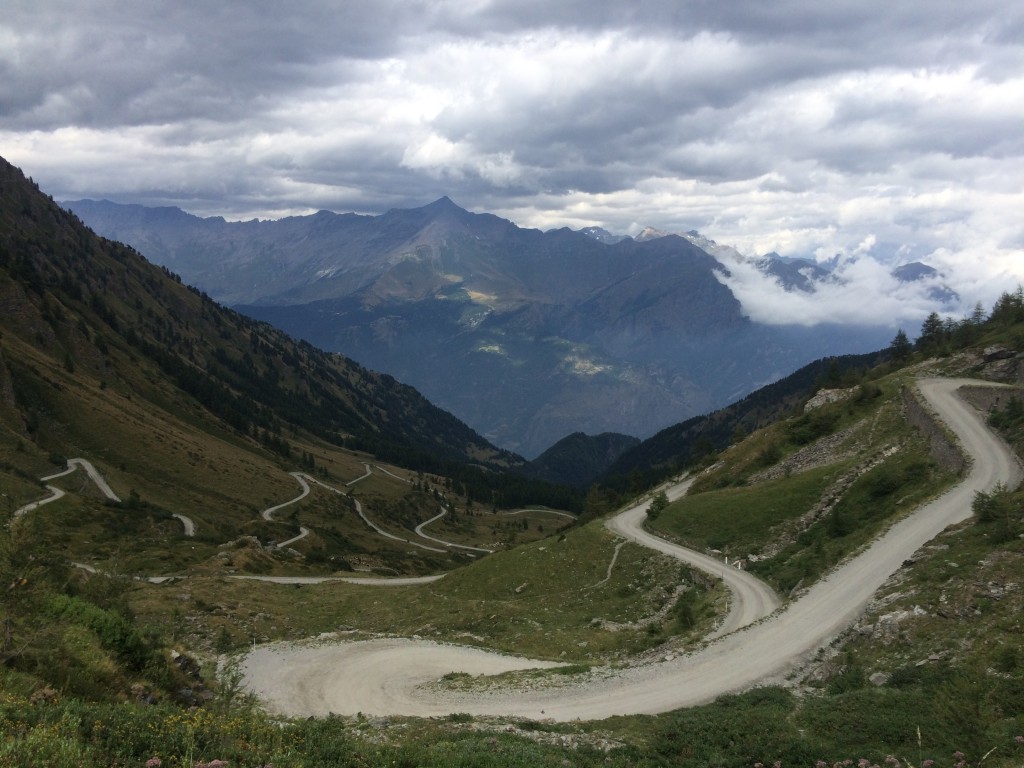 However after the high of Strada della’Assietta and the incredible descent of the Colle delle Finestre I was hit with a wall of damp heat as I arrived into Susa which sapped the life out of me. I was desperate for a sit down meal but really struggled so made do with some irregular petrol station stops. Once at Susa it was going to be pretty much flat the entire way across Italy. For those that don’t know it, don’t let my impression spoil it for you but northern Italy, south of the Alps & Lakes, north of Tuscany is a post industrial shit tip. The roads are super busy with trucks and the roads are incredibly straight and mundane. The rice fields upon rice fields broken only by the odd grouping of civilisation or roundabout were going to make for a long couple of days. I had planned to get to Cremona that night but being ~30km behind from the day before and totally underestimating the Strada della’Assieta I knew I wasn’t going to make it and would have to bivvy camp tonight.

Deep in the wetlands of Italy, with nowhere to get a proper meal, nowhere now open for accommodation, I decided it was quite enough to just roll my matt out at the side of the road. Wetlands = Mosquitos. I led down and within 10 seconds of slumber I was crawling in the bloodsuckers. I re-packed and cracked on until I found an abandoned pump house (for the rice field dykes). Bursting through the door and with a violent whip of the thermarest I stirred up decades of plaster and dust into the air only to coat my sweat-soaked skin. I simply lead down on the floor, covered head to toe in plaster, nearly out of water, all out of food, desperately hoping to fall asleep before bursting into man-tears. How easily I had forgot about the mosquitoes that had stopped my sleep only half an hour before. I re-packed AGAIN and rolled out until I arrived in Valle Lomellina. The railway barriers were down while a freight train roared through the edge of town. It was then I realised that there must be a wee guy controlling the points nearby, maybe I could sleep in the building he was in. After a bit of a sob story in my best Italian he let me crash in the waiting room away from the biters til 5am. I stripped down, got a quick wash in the station toilet and led down for a blissful 3hrs, not before my wee train pal came in presenting me with half a Twix and a packet (four) of fags.  I’d never felt so grateful in all my life!

Valle Lomellina, Italy to Verona, Italy (210km → 660m ↑) [Sadly no photies due to lack of battery and more pressing issues]

Grateful of my ferrovia rest stop I set off in desperate need of food and water. I was 50km behind yesterday’s planned destination (Cremona) and with today’s end, Logatec in Slovenia (397k from Cremona) I had 447km to get through if I wanted to get back on track. I knew from the off this wasn’t going to happen. I hadn’t had dinner the night before, I had no water through the night and had no charge left in the lights after last nights efforts. Luckily it wasn’t long til I found a wee café for my doppio doppio which brighten my outlook. This is where I bumped into #31 Martin who’d just abandoned a quick bivvy sleep in the mosquitoes to crack on east. I invited him to stop and get some breakfast with me but he was keen to bash on. I’d met Martin a few times before in France and it was great to see a familiar face. Keen to catch him up just a for a bit a chat a smashed through my breakfast and hit the road again.

After about half an hour of pedalling, 20km from Pavia, I came across a bunch of cars stopped in the road with the traffic stopped. I spotted people off to the side of the road in the rice field gathered around someone. As I rode closer I noticed the bike debris all over the field to my right and my heart stopped. By the state of the bike and the distance the crowd had gathered from the bike I suspected the worse but was so relieved to see Martin conscious but clearly in a lot of pain, on his back in the field. He was ok. I made sure an ambulance had been called and in what I have of Italian tried to make out what had happened from the locals and try to calm them all down. A small van had driven right into the back of Martin, claiming he’d not seen him because of the low morning sun. Martin was in a lot of pain but thankfully nothing that needed immediate attention (from a first aider).  I did what I could to help; took pictures of the bike, van and Martin, contacted the race organisers, gathered up his valuables for hospital. I also offered to come to hospital with him, I couldn’t bare the thought of this guy going to hospital in a foreign country having to deal with police, insurance etc.  Martin was adamant however that I didn’t scratch on his behalf. I didn’t argue and helped where I could until the ambulance left.

I raced on but with the weight of morale dilemma on my shoulders. I had to find out how he was, my phone was dead and I had no idea what hospital he was going to. I also had no idea if the race organisers had received my texts from Martin’s phone. I eventually rode into a petrol station and begged with the gratuitous purchase of ice cream and coke to let me charge my phone for a wee bit, enough to email the race organisers.

The drama of the morning had totally kicked my ambitious plans to get to Slovenia into touch so I decided to get to Verona, get a proper bed and recharge mentally, physically and electronically.

A day behind my plan I wanted to try and limit my losses and beast out to the planned ending in Logatec, Slovenia. My third day in Italy and I was getting very tired of Italian drivers and flat straight roads. Already exhausted, the monotony of roads took its toll on Day 7 when I got a bit hypnotised by the white line. The next thing I know I’m upside down in a rice field. No damage done but it was clear that I needed more roadside sleeps stops. Lucky I fell to the right and not the left. 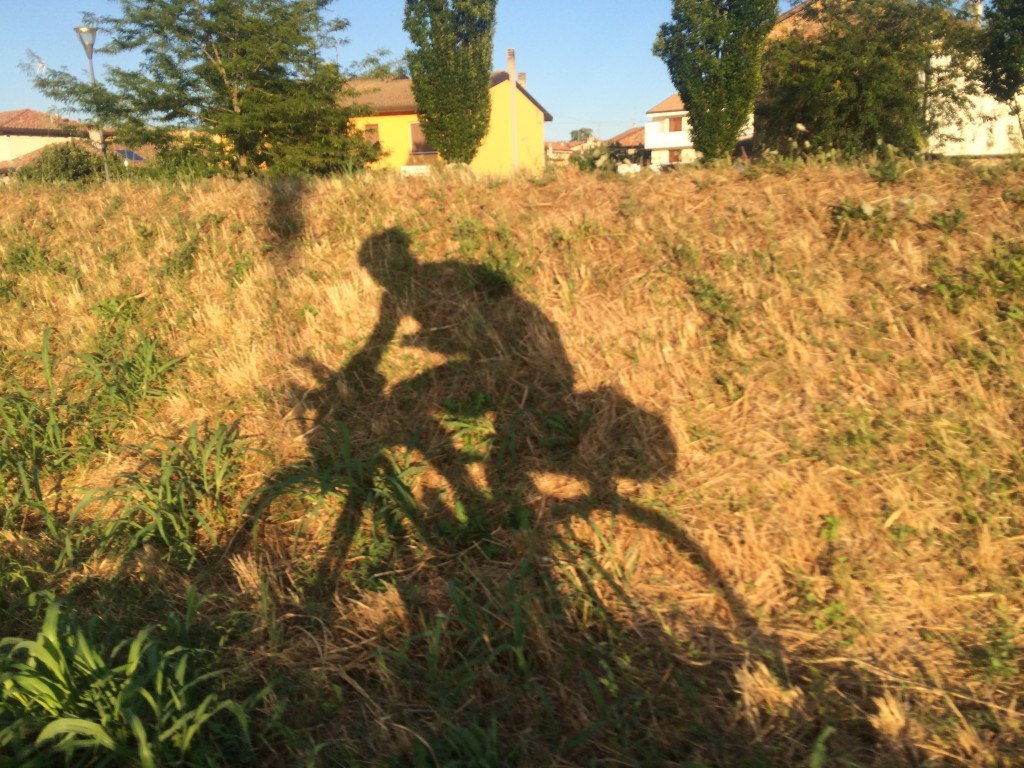 While in the Provence I was enjoying the delights of local free apples and peaches, today I smashed that road-side swag bagging a Trevisonese melons the size of my head. So juicy, so sweet. There has never been more pleasure when thirsty/hungry than smashing into a melon on your lap on the side of the road like a total jake. Mind the opening scene to Robin Hood : Prince of Thieves when KC steals a melon, just like that, except all for myself. 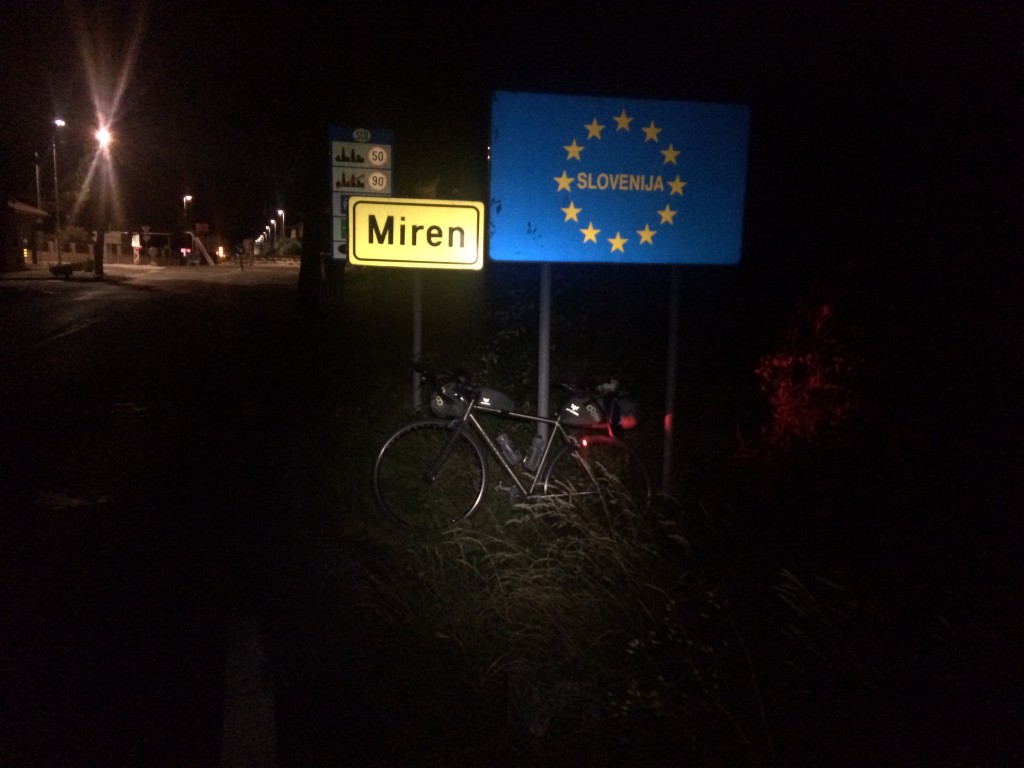 Anyway I cracked on to slip across the border around 10pm and started to make the long ascent to Logatec. I was so happy to be out of Italy. I’ve visited Italy many times and I love everything about it, the food, the landscape, the people, the language. Those three days however I’ve really tainted my love affair with it. On the plus side, I was climbing again. The moon was full and shining brightly, enough for me to catch a glimpse of this beautiful country I’d just arrived at. I was so excited to travel across it the next morning.

The plan was to bivvy high up the hill in an attempt to avoid mosquito hell. Just about the top of the climb I was stopped by a couple of natives cutting about in a Nova. “hej želite zabavati?“, “whit?”, “you! English?”, “nah man, Scottish”, “fuck, yes-my-guy, you want to come a party, there is local witch becoming bride and we are going cresh her party, follow whisky man”. I was so tempted to get good and mangled.