For clarity and as a key map of Mr Lindsay’s brain; “speech” and *thoughts*.

Perhaps one of the most unique aspects of the Scottish ‘cross scene is that in order to get to two of the race venues you have to take a ferry. Can you imagine Sven rolling his camper onto one of CalMac’s finest vessels and hanging about in the lounge hitting the puggies for some extra post race bevvy cash? Nah, me neither but if you were lucky this weekend you might have spotted John McComisky (SR Albannach) pushing his fiets complete with a black bin liner wrapped tent. His Royal Sveness could only wish such a level of luxury was available to him every weekend.

The Rothesay Cycling Weekend (www.rothesayweekend.co.uk) is a great event that brings together pretty much all the popular forms of cyclesport in Scotland and usually it’s good excuse to get pished. It doesn’t say that on the website but have a look at a few faces before the Serpentine hill climb and and you’ll see the stare of riders who would rather be curled up in bed. From personal experience, nothing clears a hangover like the pain of a hill climb, or just roll back down to the pub until the 2-up time trial in the afternoon. Your warm up can be the five minute sprint to the start line.

The cyclocross race is a relatively new element of the weekend with the 2015 edition being the third. Last year I helped out Jim Cameron (SR Albannach) with the race after he took it on at the last minute. Sitting on the finish line doing manual timing is far more stressful than even the most challenging ‘cross race and I knew I had to enter this year after taking a season off. I found myself getting the train fae Central with Jim and the bad boy of ‘cross B*rr (RCCK). The usual catch up chat from the last race commenced (read Baws Oot at Beveridge Park), full of a curious mixture of bravado and excuses. More importantly we found out that B*rr got his bottom bracket replaced and no one would have to suffer that squeaking hell.

As the train speeds it’s way towards the coast, we discuss the start list and the lack of hitters that we could recognise beyond James Fraser-Moodie(Pedal Power RT). Jim and I briefly discuss our Three Peaks CX madness; this wee race on Bute suddenly doesn’t feel so scary. Consensus is agreed over the bare minimum being not getting a pumping from Dave Hamill (Pedal Power RT) which these days seems to be everyone else’s goal. Poor Dave.

“Next stop Weymss Bay”. Off we get and scurry along to the ferry with ten other riders. Oh aye, who is that over there on the starboard bow wielding two ‘cross bike? None other than Stephen Jackson(Glasgow United CC), winner for the previous two years and here on a cheeky wee on-the-day-entry. That’ll be the three of us down a place each already before the race has even started.

The ferry makes the brief journey across the water to Rothesay, Isle of Bute; it really is brief. More people should come to this race. No excuses. Discussion turns to what races we fancy (all of them) and the most important subject of the day, not tyre pressures but the post race nutrition. Carry-out or pub? ‘Cross racing is serious business when it’s on the west coast.

The short ride up to the course allows us to check out the unique start, neutralised behind a car from the town centre and then a right turn onto a gravel track. It’s different, for sure. We arrive and people are already on the course taking in their practice laps and I spot Allan Love (that’s another place lost then); it’s always good seeing Dr Love at races. As we talk I spot the unmistakable sight of a rider in Velosure Starley Primal kit. David Lines is here and that’s another place I’ve dropped. 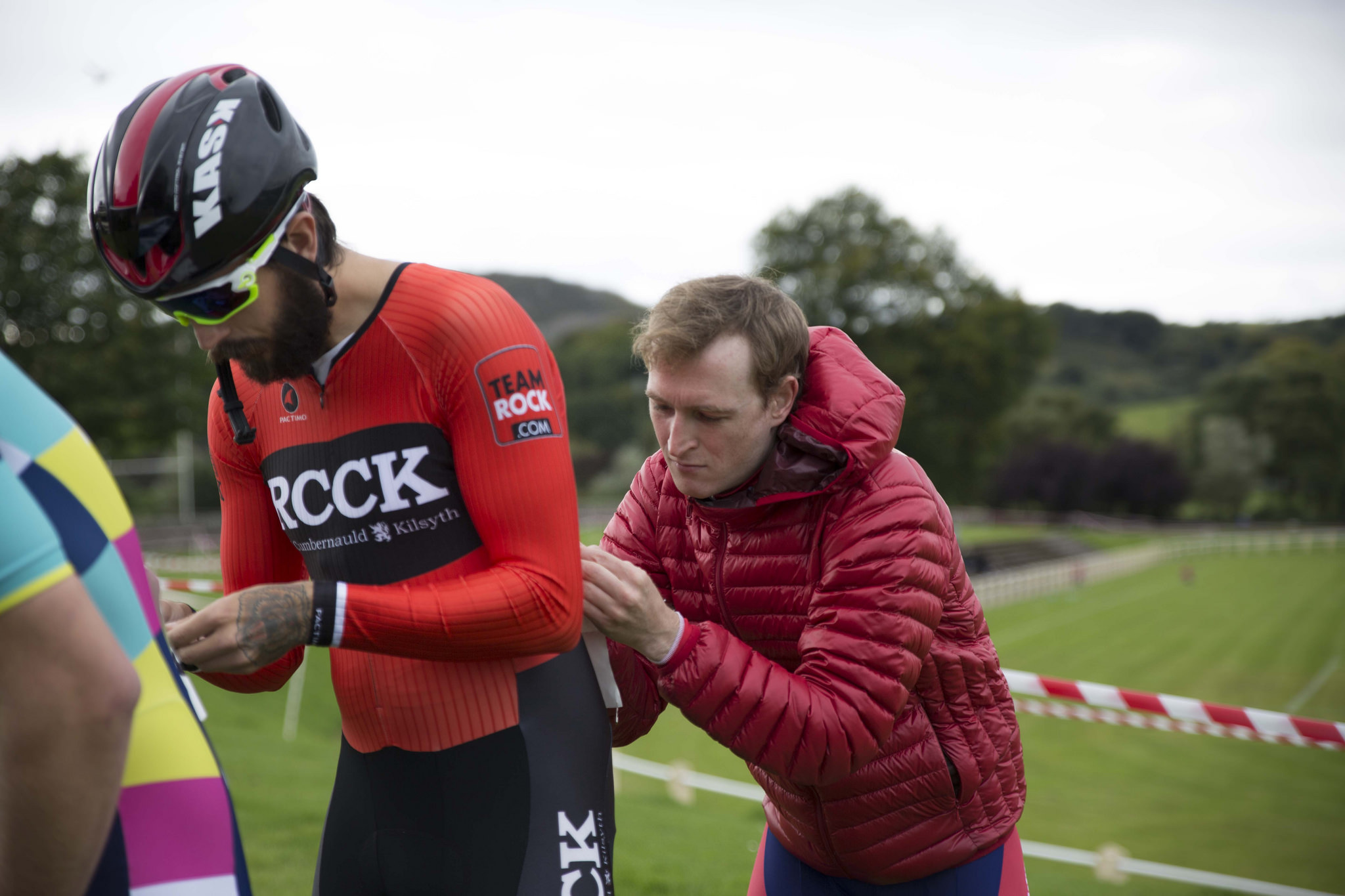 We grab our numbers at sign on and quickly get changed into kit. What followed this could only be described as a human numberpede as the three of us bent over pinning our numbers onto each other. What looks pretty normal at a bike race would look pretty unique in any other context. I spot the Beardy Man fae the Nightingales (Jason Barnes – Glasgow Nightingale CC) and reckon that’s another place I’ve lost. A wee discussion with other riders about the course and off we go for a recce.

Gravel; fast ‘n’ slidey. Sand ruts; *yass*. Across the narrow bridge. Fast tight twisty corners; *yass*. Back onto gravel. Hit it straight and ride the grass at the side. Onto the tennis courts. Nice wide open corners; *good for overtaking*. Short wee hill; *sight the tree root on the transition*. Fast down the grass, back up, back down into run up with short steps; *can’t ride them, damn*. Compacted gravel; *small rest spot*. Drop down muddy banking; *dinnae brake*. Drop down another wee step into mud; *commit to the rut*. Jump the log. Volgas back up the banking; *another small rest*. Down and then onto the grass of doom; draggy. *Keep inside through the corners*. More draggy grass. Do a one eighty and into another, drop down the banking, along the gravel and up the steps. Repeat. 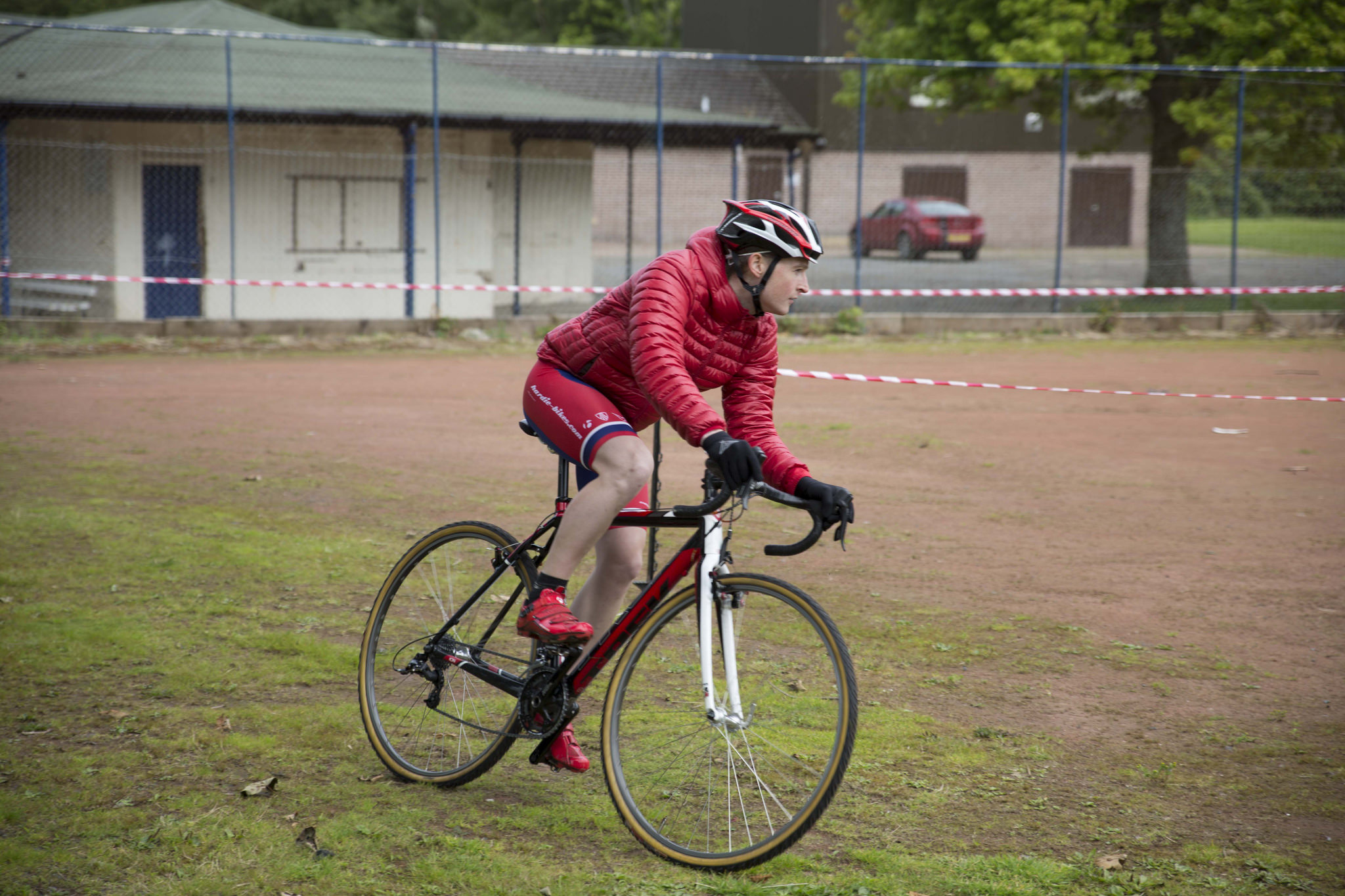 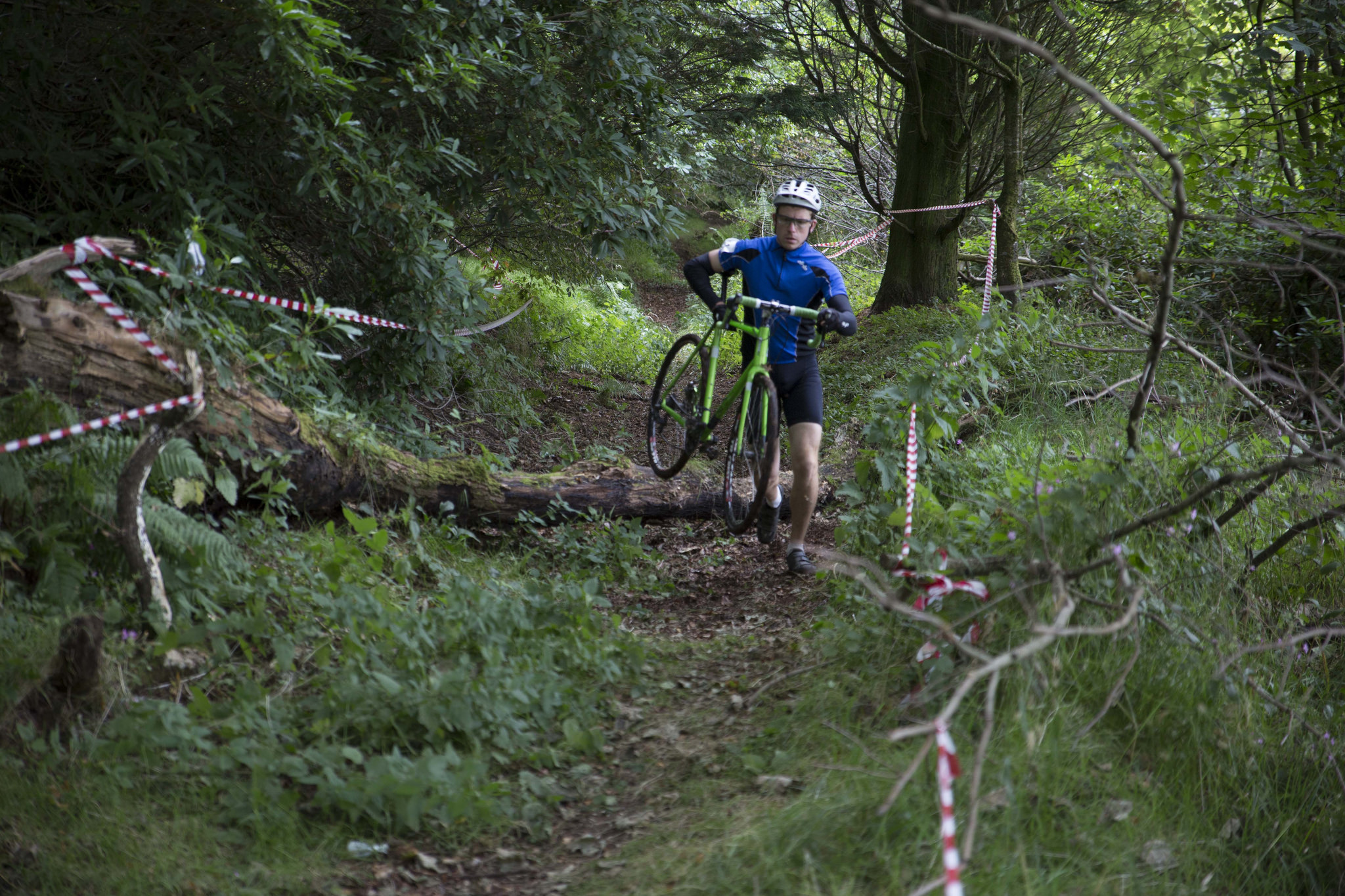 “Riders please make your way to the start”. The slow exodus of riders back into town begins. For once I seem to be early; *that’s a plus*. Groups form according to who everyone thinks they will be racing and the bullshitting begins. It’s all part of the fun and games and I wouldnae change it. The road is closed and we grid up. *Whit? Front row. Jackson to my left Jim to my right*. “How did I get here? I shouldnae be here”. We’re told to stay in formation until we reach the course and off we go behind the car. There is a bit of hussling, Jim drops off to my right. Still in the front row. “I shouldnae be here”. Onto the course and the gravel and the flag goes down. Lines goes first and in typical style Jackson jumps hard and somehow I stay on his wheel. “I shouldnae be here”. 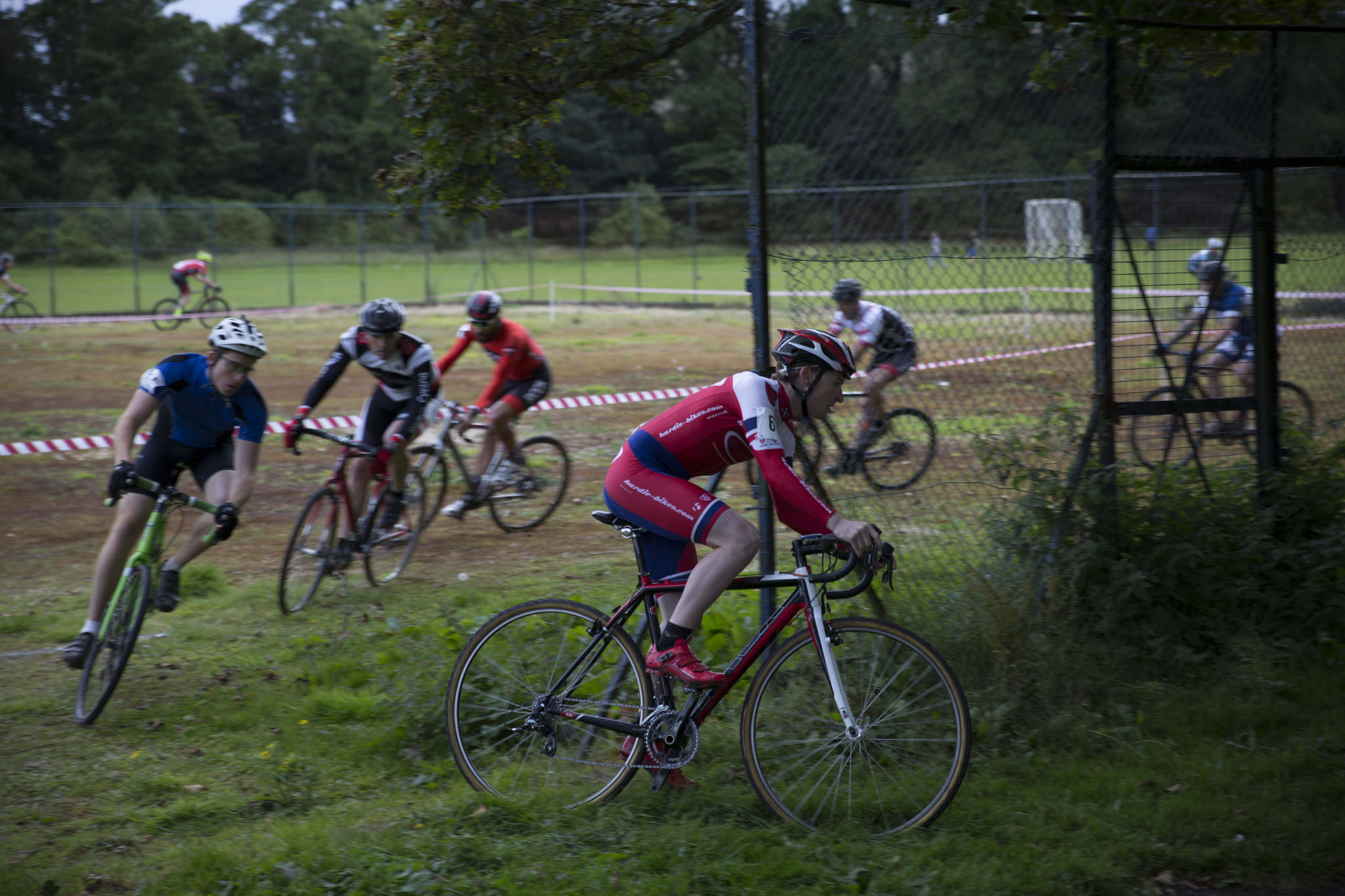 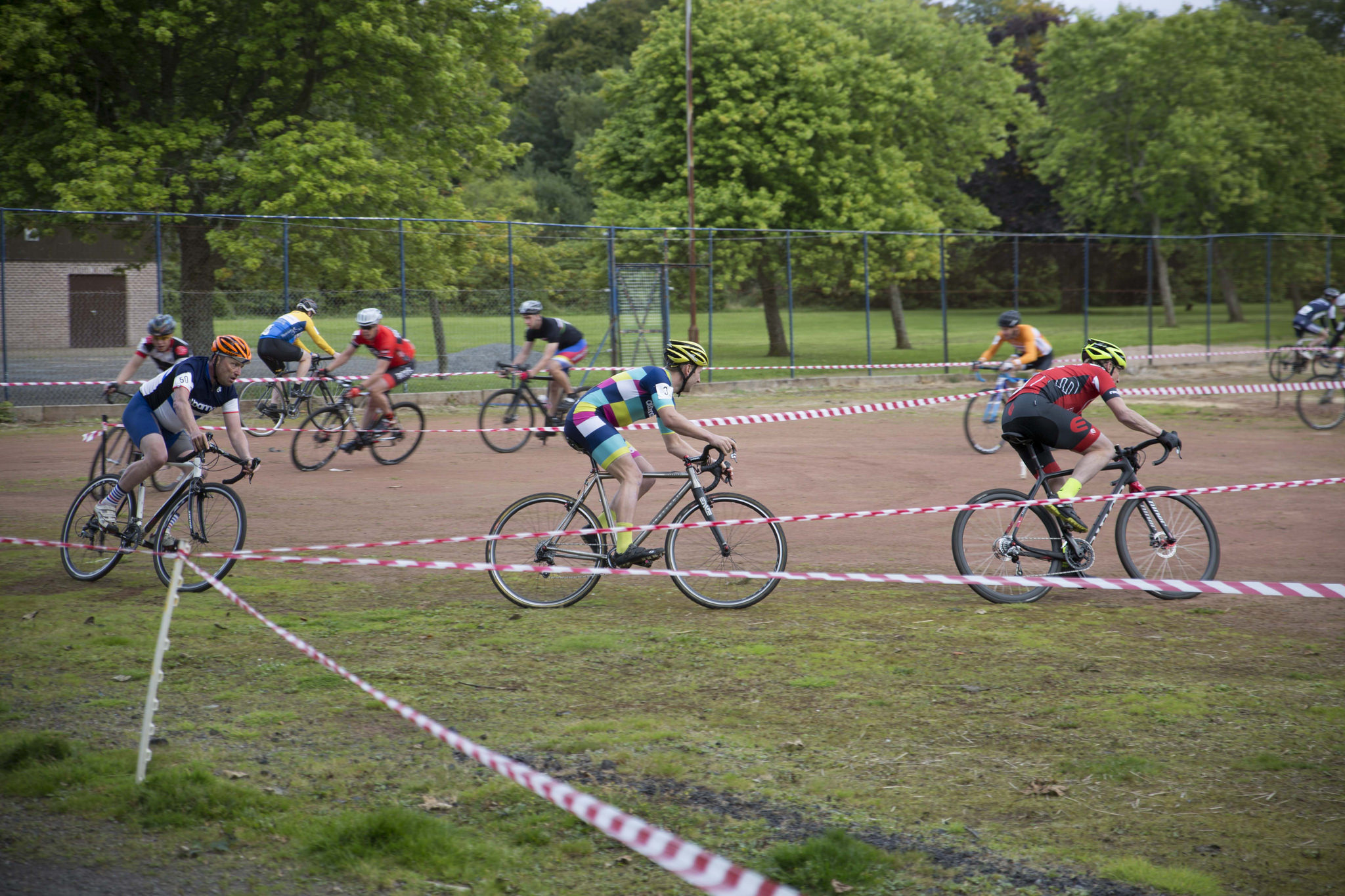 Through the sand, over the bridge, I hold on into and out of the corners and then they’re gone. Normality is returning quickly. After the tennis courts Fraser-Moodie passes. I take a glance back and there is a huge gap to the next riders. “I shouldnae be here”. I put my head down and try and not get carried away. The first 180 degree corner lets me see the gap behind me. It’s a nice cushion. Dr Love is there leading the chase. B*rr, Jim and Hamill are there too. *Dinnae get pumped by Hamill*. 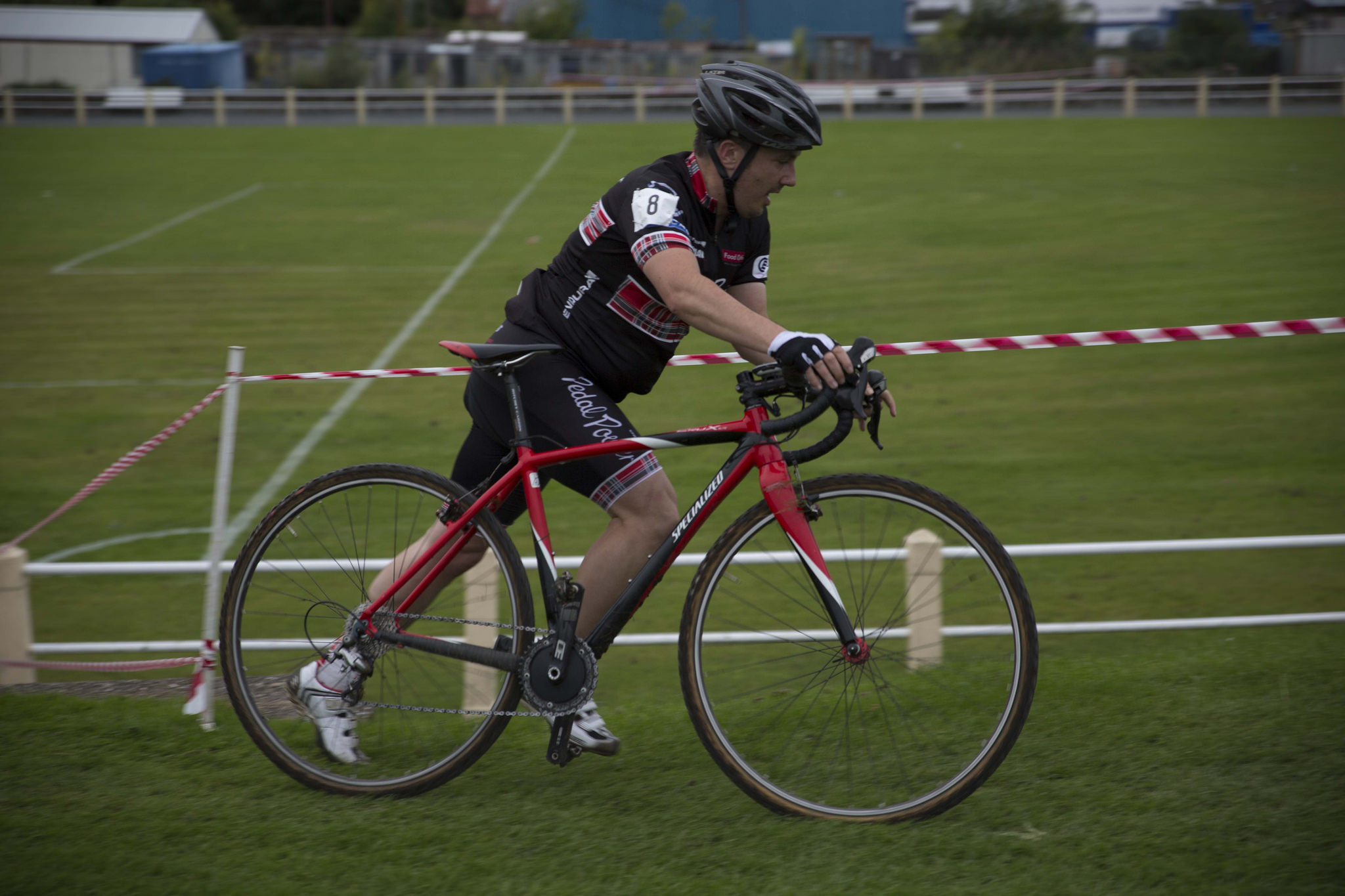 Across the finish line to complete the first lap, Fiona Walker on commentary calls out fourth place and but is confused to announce my name. “EUAN LINDSAY!?”. It sounded like a battle cry rather than a helpful shout. The human numberpede had failed me. When is a 6 not a 6, when it’s a 9. Cheers Jim [Marginal losses powered by SR Albannach]. 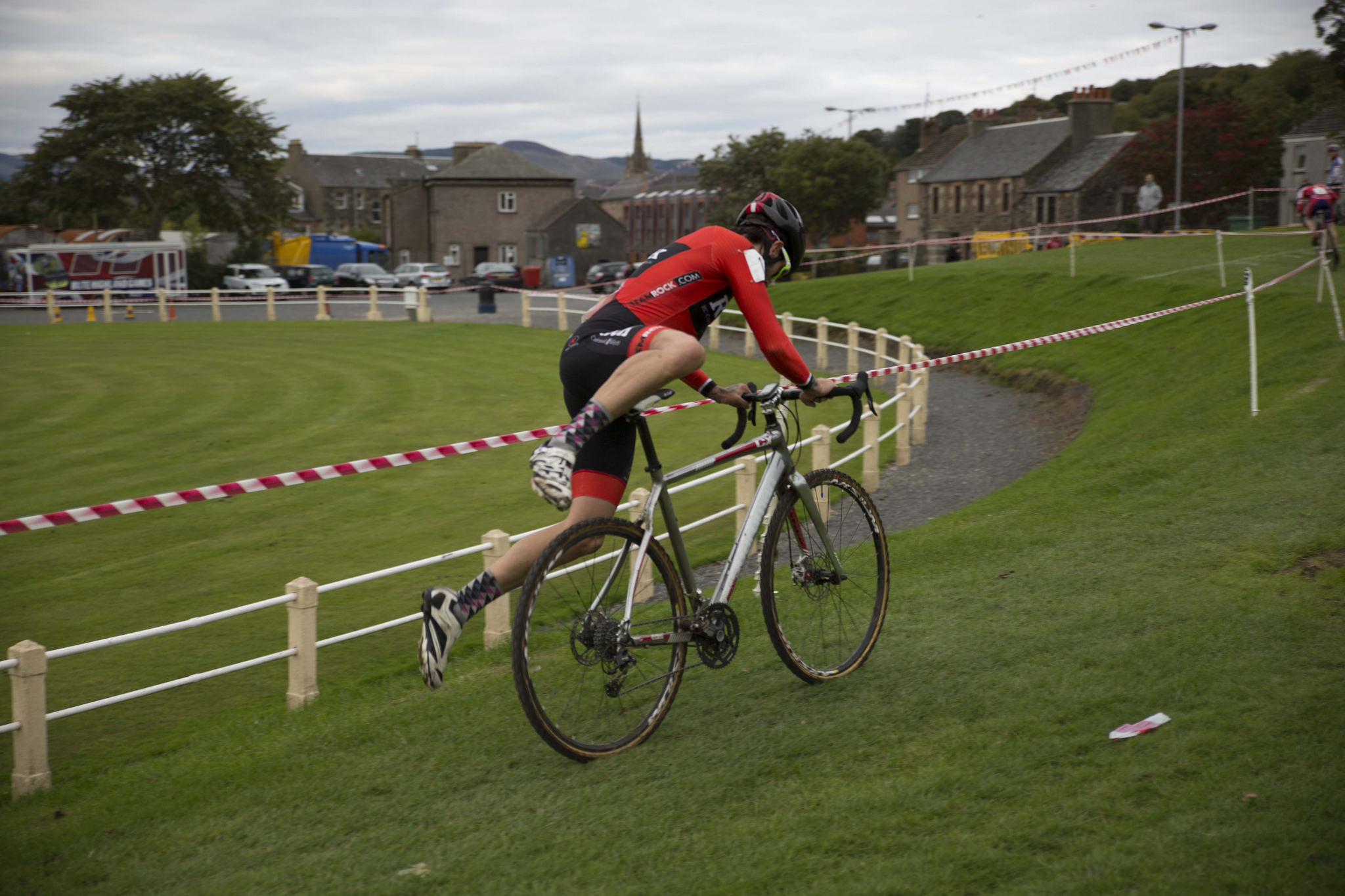 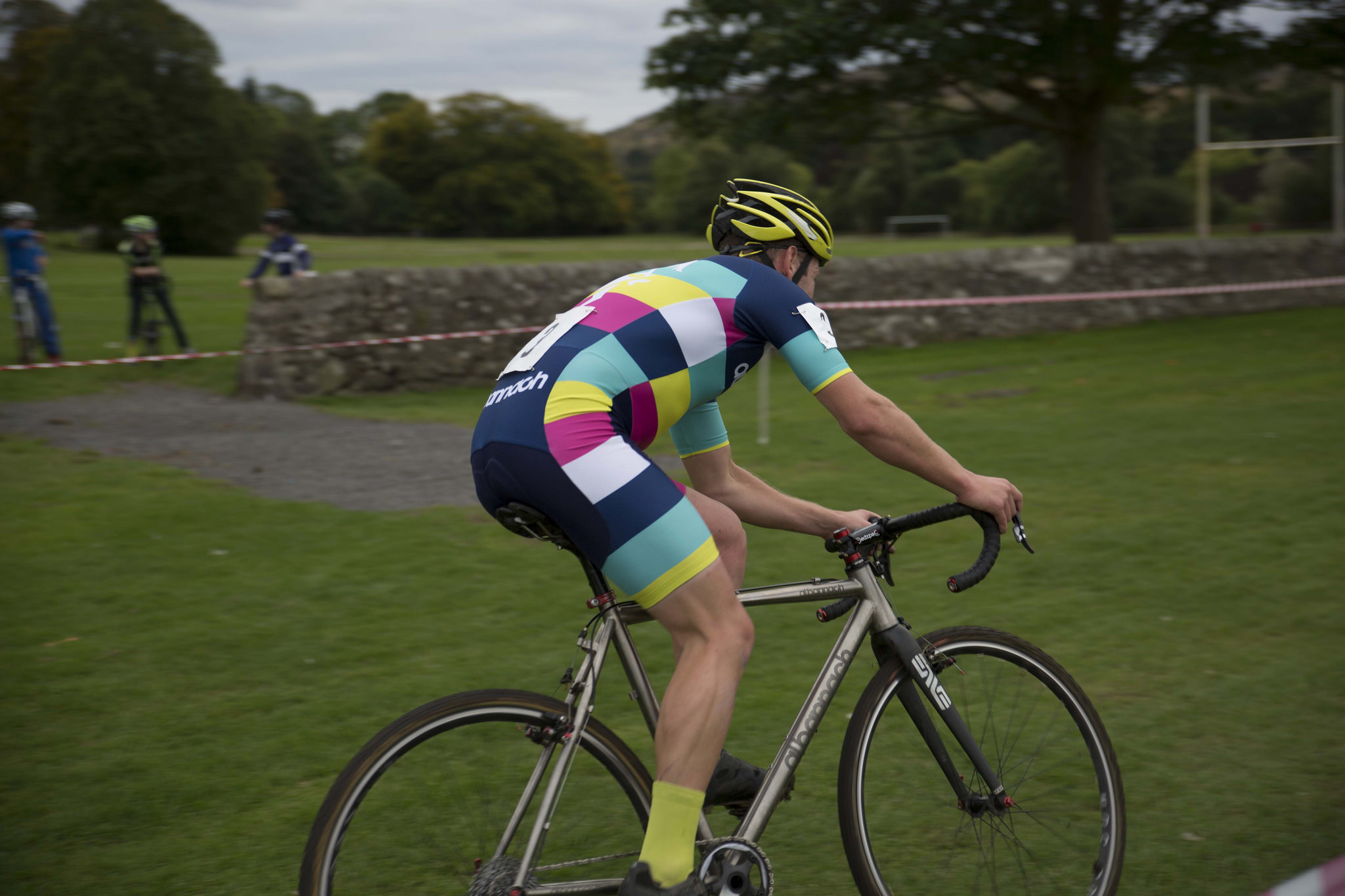 I keep on riding. The course is starting to bed in a little already with new lines and ruts forming and the mud is a little deeper. This is what I love about cross, when the course develops as the laps count up. I check the gap again, Dr Love is pushing on and B*rr is little further back. But, they are coming. Up the concrete steps again, “and in fourth is Euan Lindsay with his numbers upside down”, “That’s Jim Cameron’s fault”, “Apparently it’s Jim Cameron’s fault”. Another lap and Dr Love is closing in and passes me, *don’t panic, just ride a little harder*. Slowly I catch back up and finally on his wheel, “Dr, Dr give me the news”. At some point I manage to get past and open the gap again, but now a rider from Thomsons (Iain McMullen – Team Thomsons Cycles) and Beardy Man are coming. Another lap goes by. 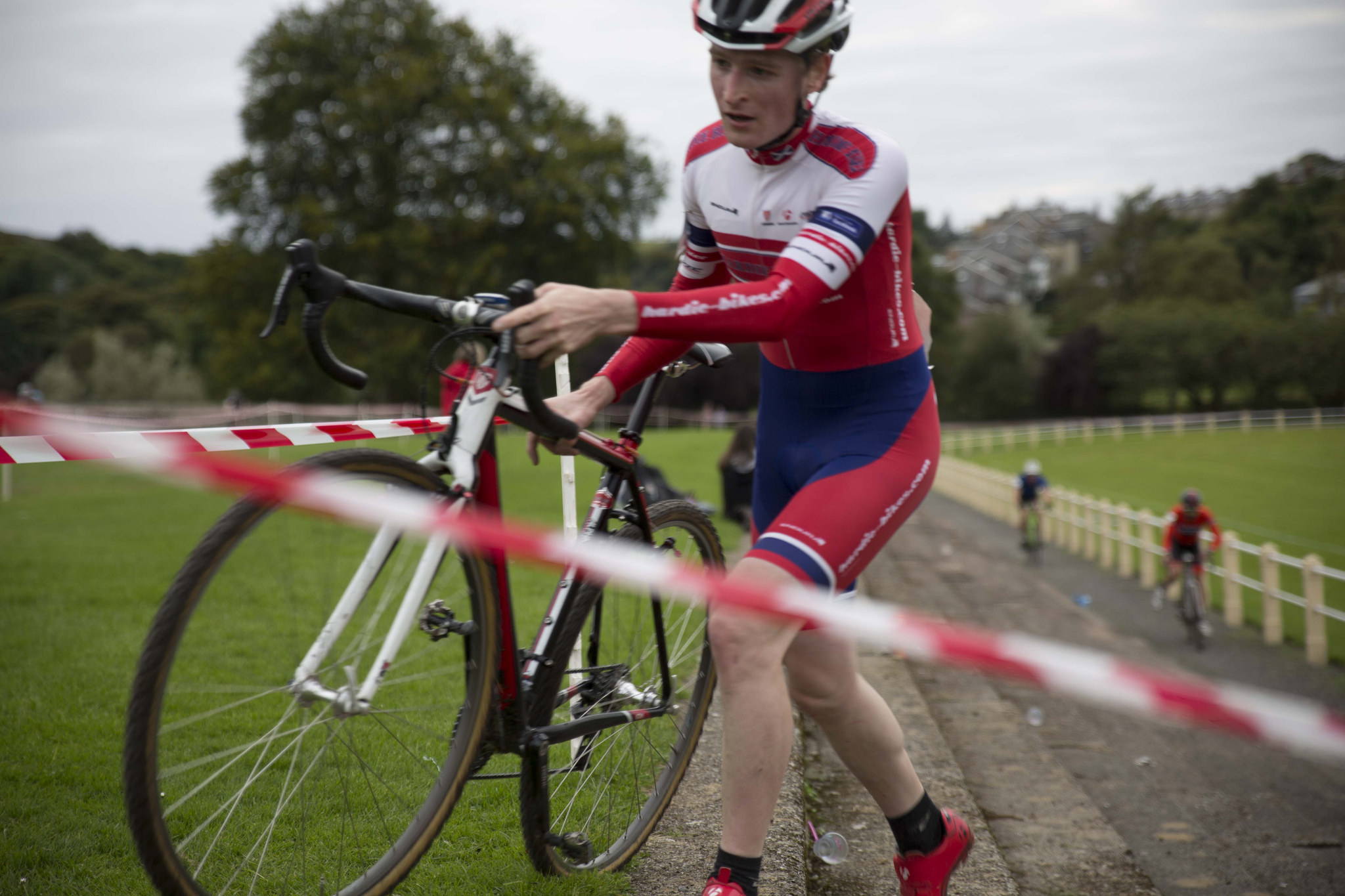 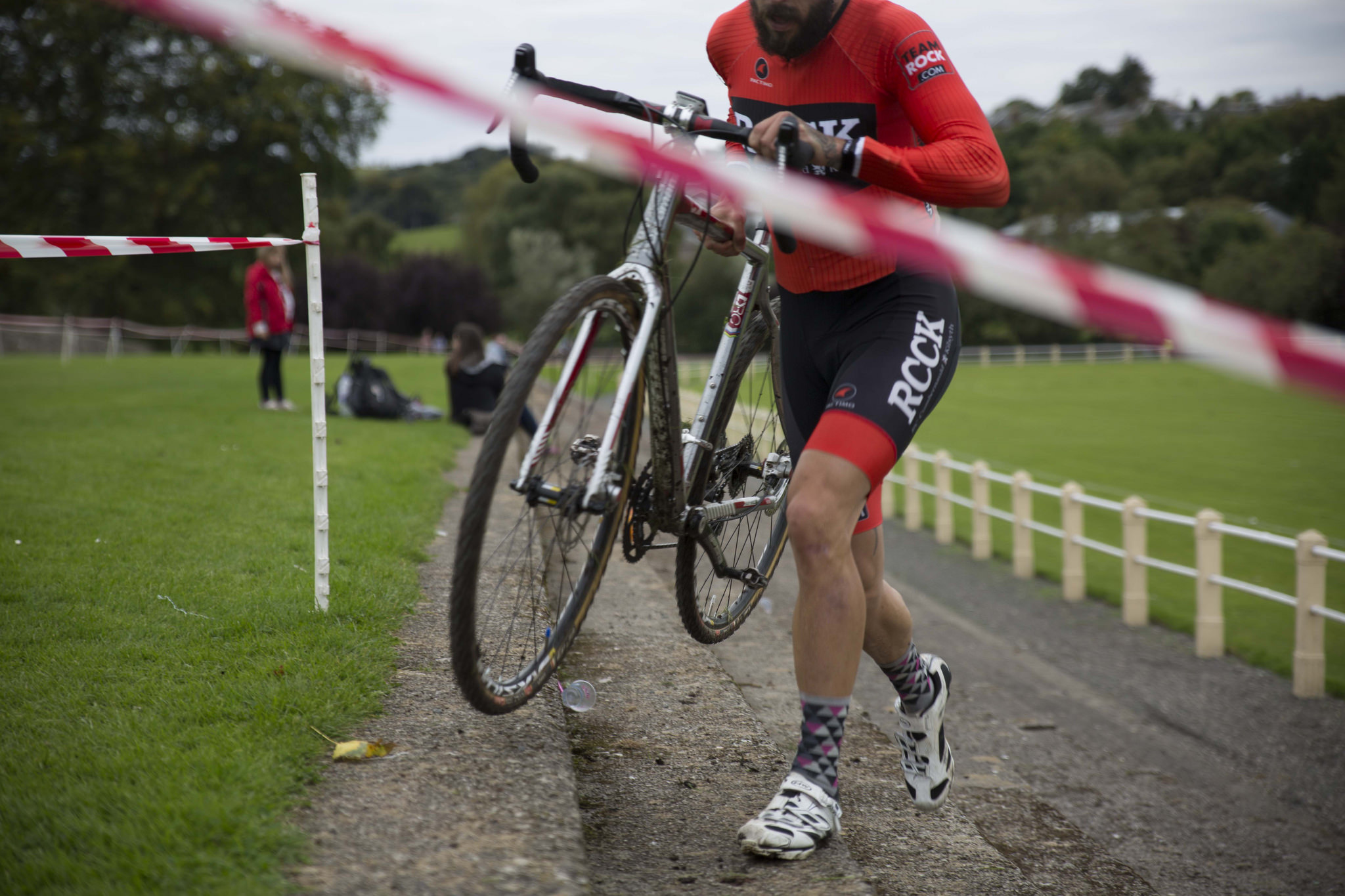 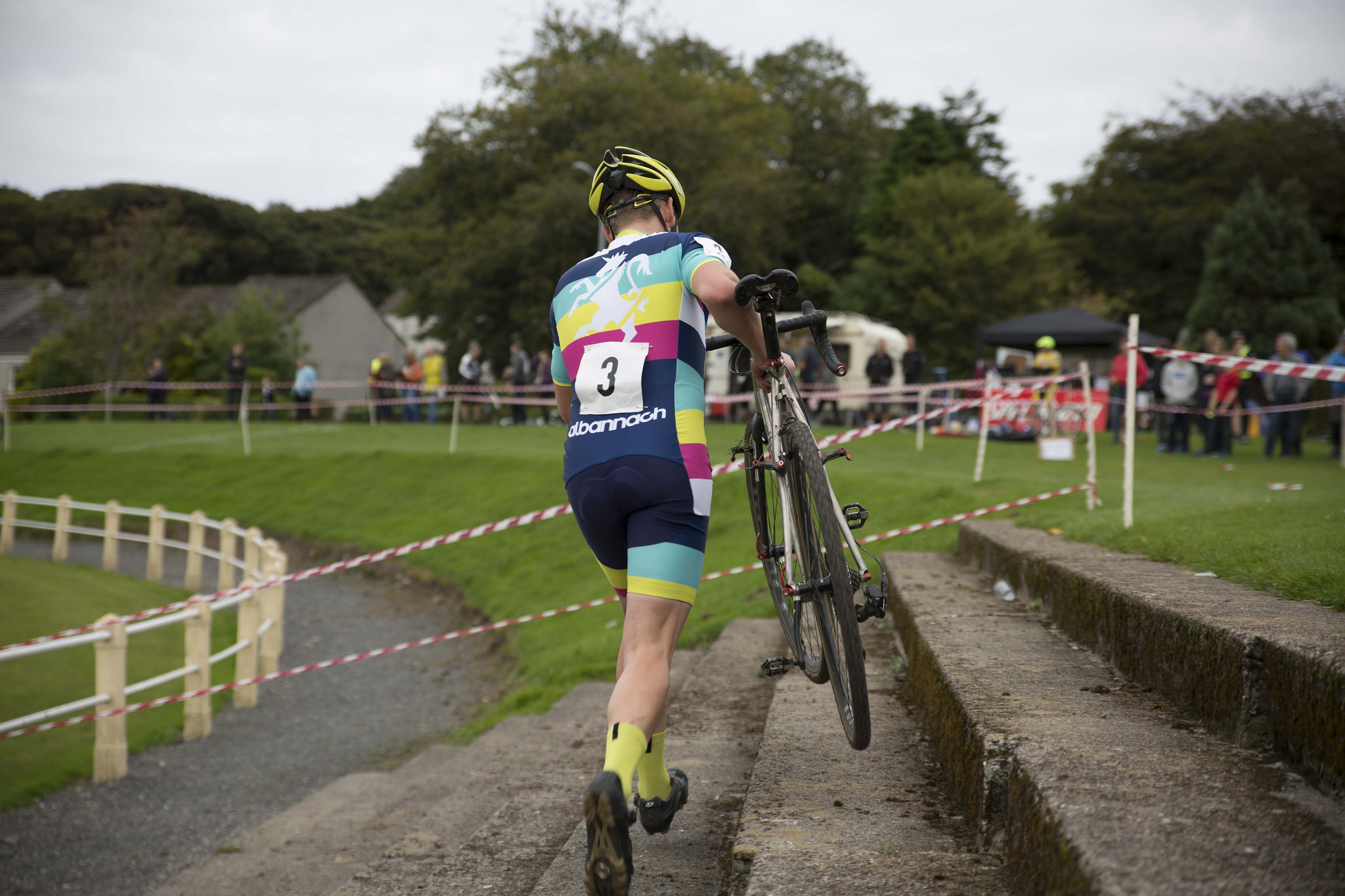 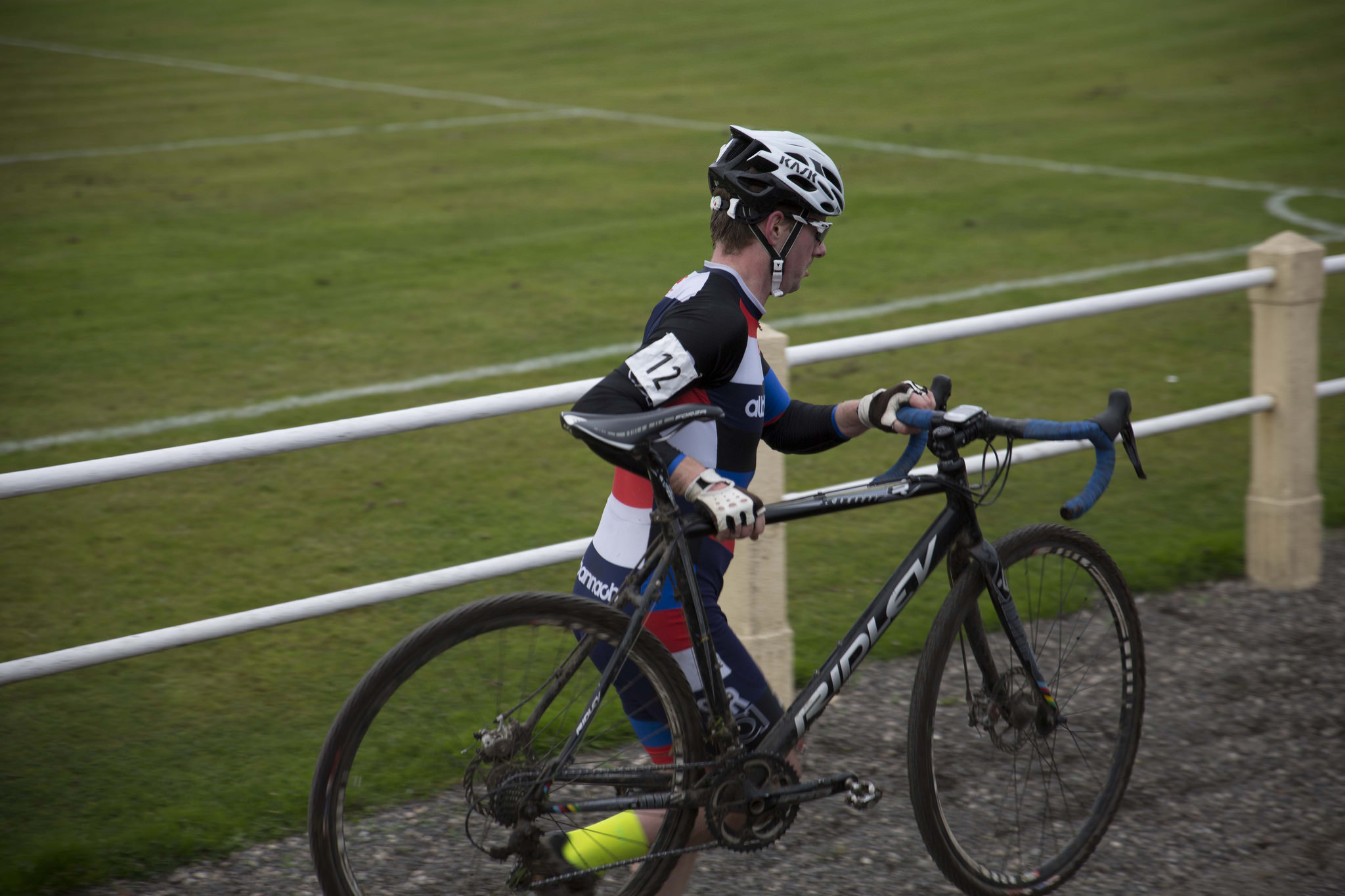 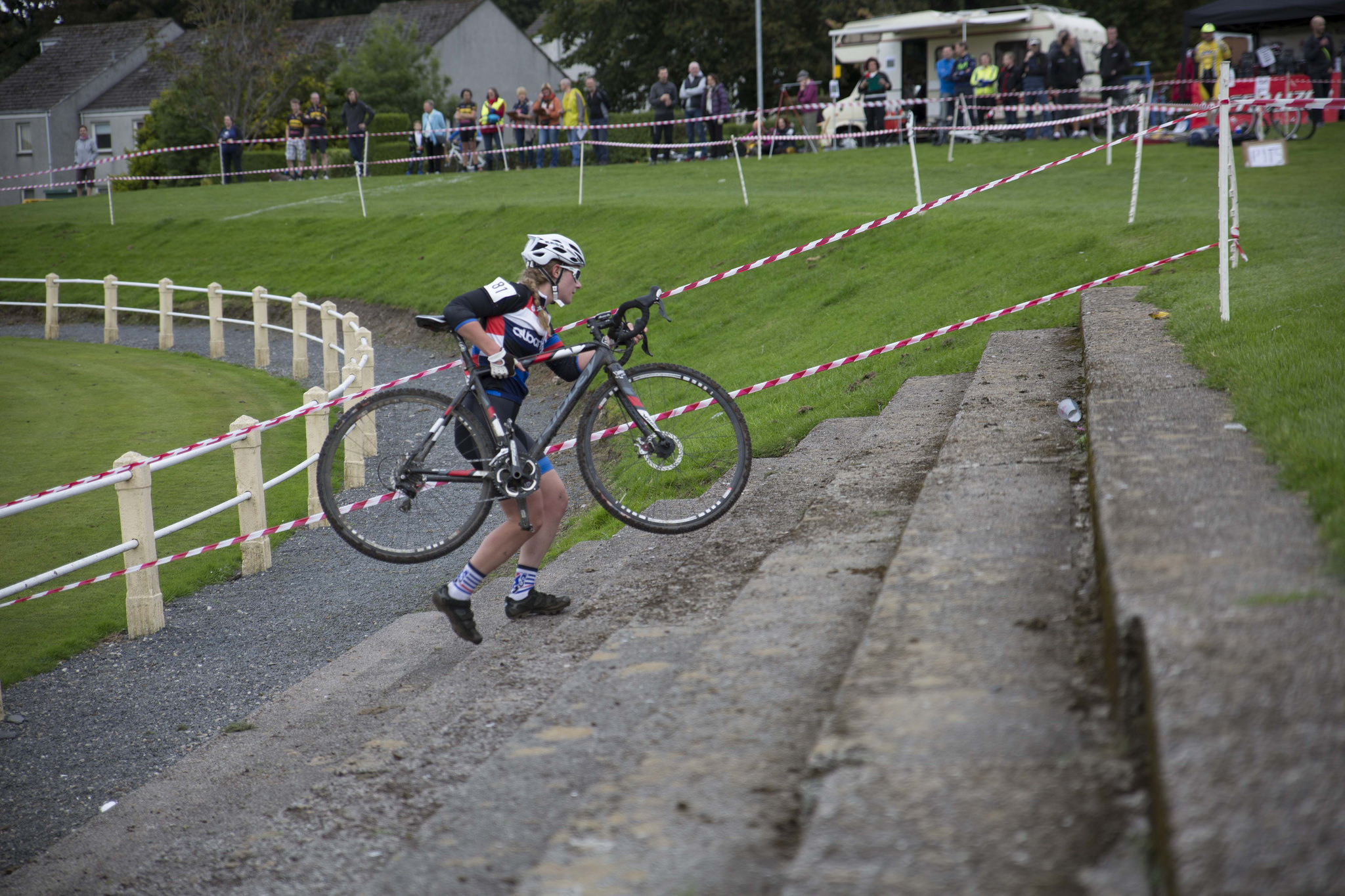 Then the first hiccup happens; on the drop down the banking to the gravel I lose my front wheel, then I turn into it to catch it, then it goes again. A dead stop and lucky not a fall down head first. With that, boom Dr Love is back on my wheel and past again. *5th is still awesome*, Thomsons and Beardy Man are still coming though. *Fast*. I do what I can to stay some bike lengths behind Dr Love but first Beardy Man goes past followed swiftly by Thomsons. *Oh well 7th is still 7th and B*rr is still a good bit behind*.

I start working through back markers and they were all good. “Hey how you doing Princess?”, McComisky always get some special attention. Approaching the descent into the mud pit one rider was walking his bike on the line, with no where to go I came to another dead stop. *Shiiiiiit!*. My cool head prevails and I ran it. With one lap to go and I look back again to see that the gap’s still good, I’m still 7th. It’s starting to feel like I should be here. Through the tight corners I end up slowed by another ride, *it’s cool, the gap’s good enough*. 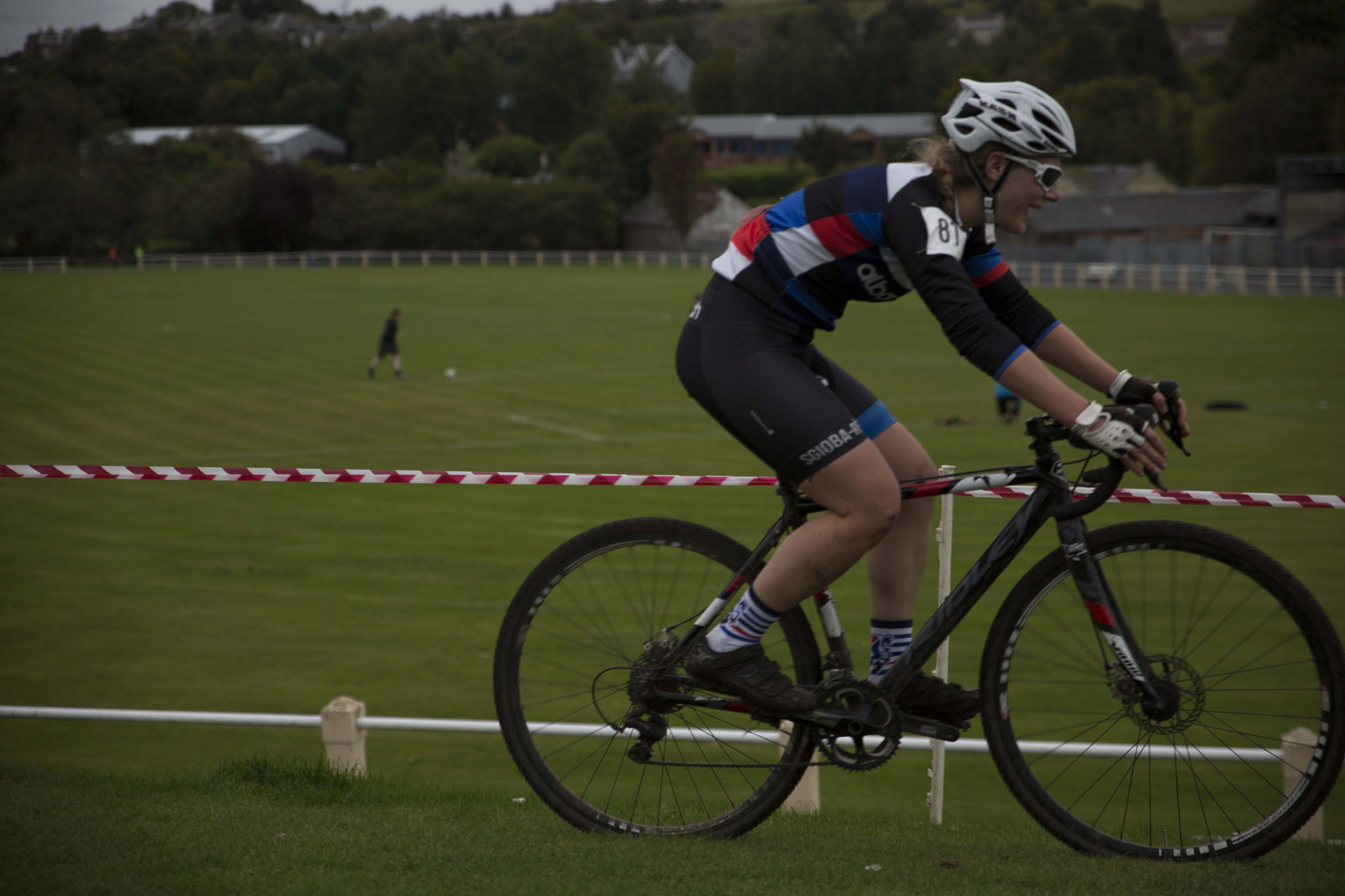 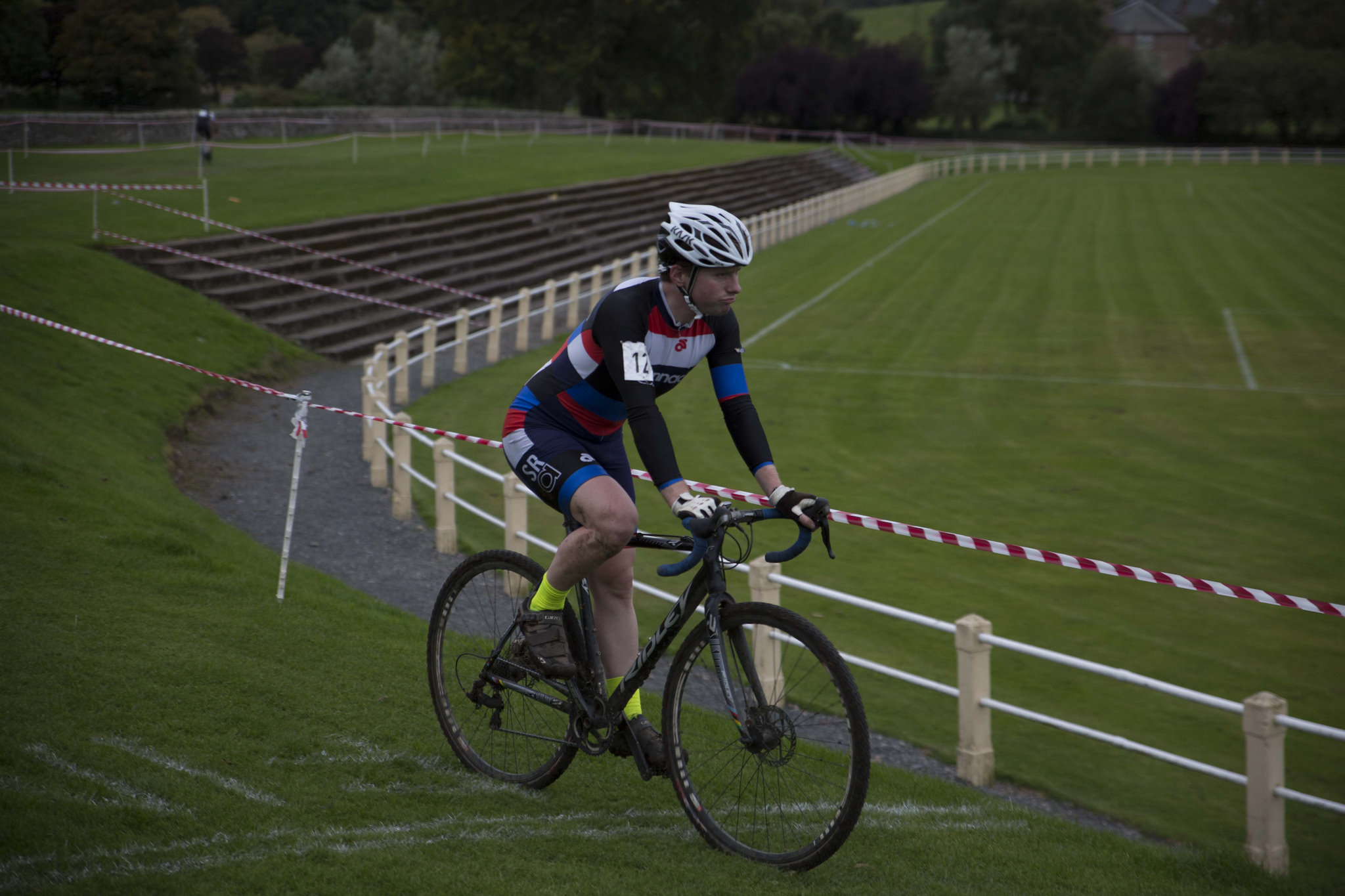 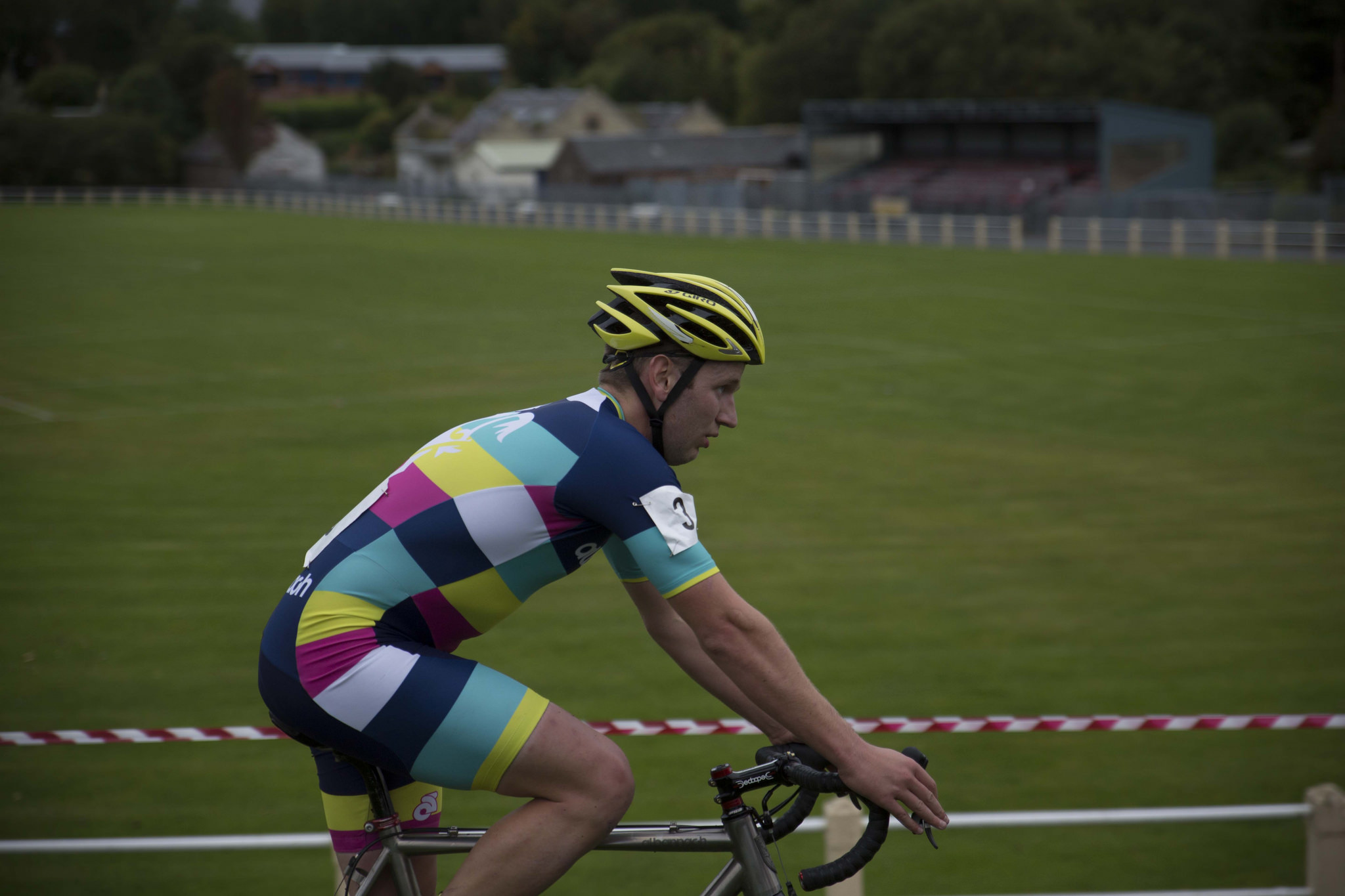 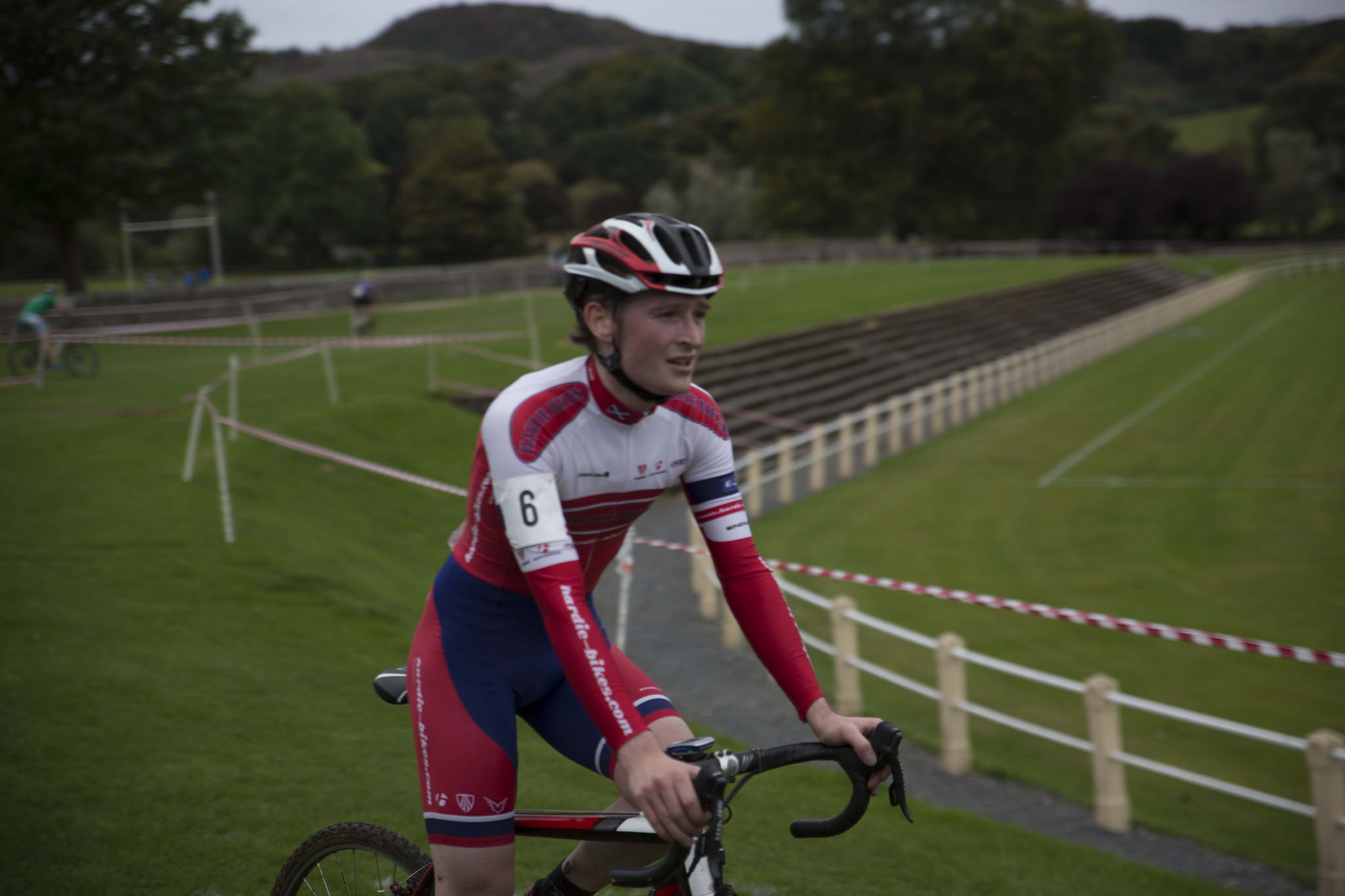 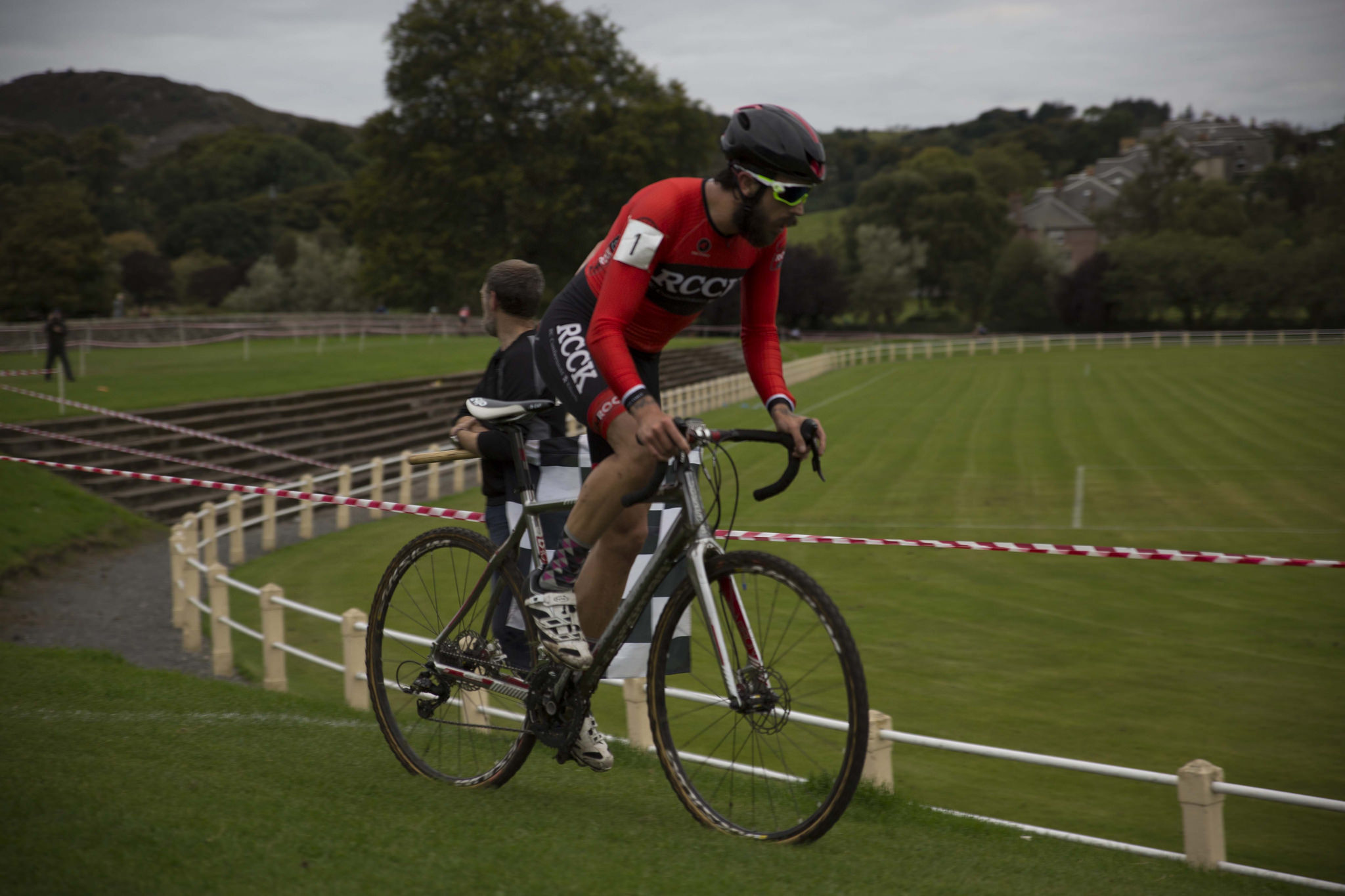 I hit the tennis court one last time, *whit? How did B*rr get so close?*. I push on feeling him getting closer and closer, then as we hit the draggy grass for the last time and he passed. *I’m still 8th, still a good result*. I ease off, settling for it not realising a VC Edinburgh rider (Niall Shannon) had given B*rr the hurry-up in the first place. I didnae realise until he passed me coming out of the second last corner. “BAWS!”. I put in a chase but can’t quite get the line through the last corner, 9th. B*rr this time around crowned, the pumper. Next time, who knows but he was right, it’s going to be a great season of racing each other. 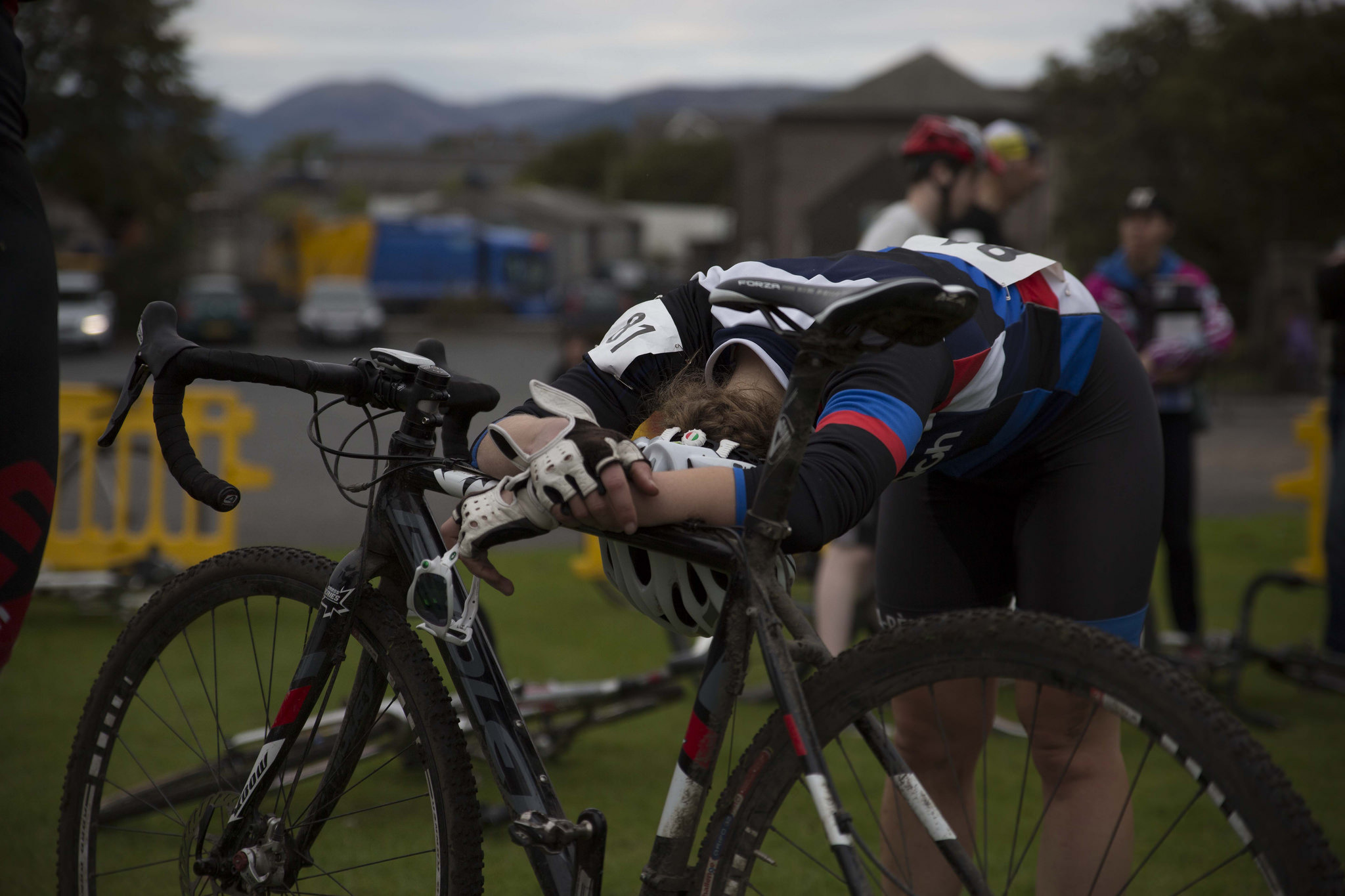 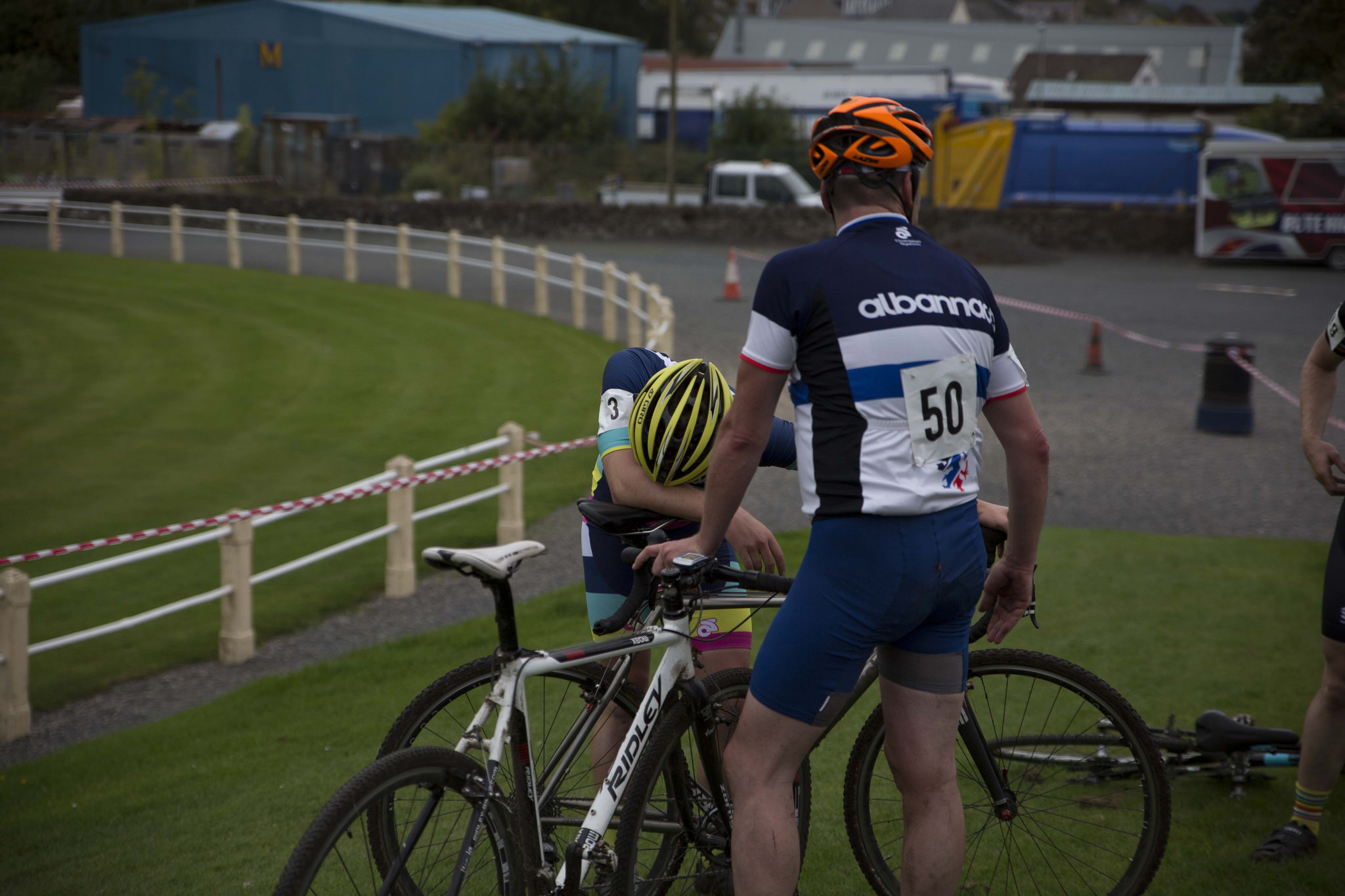 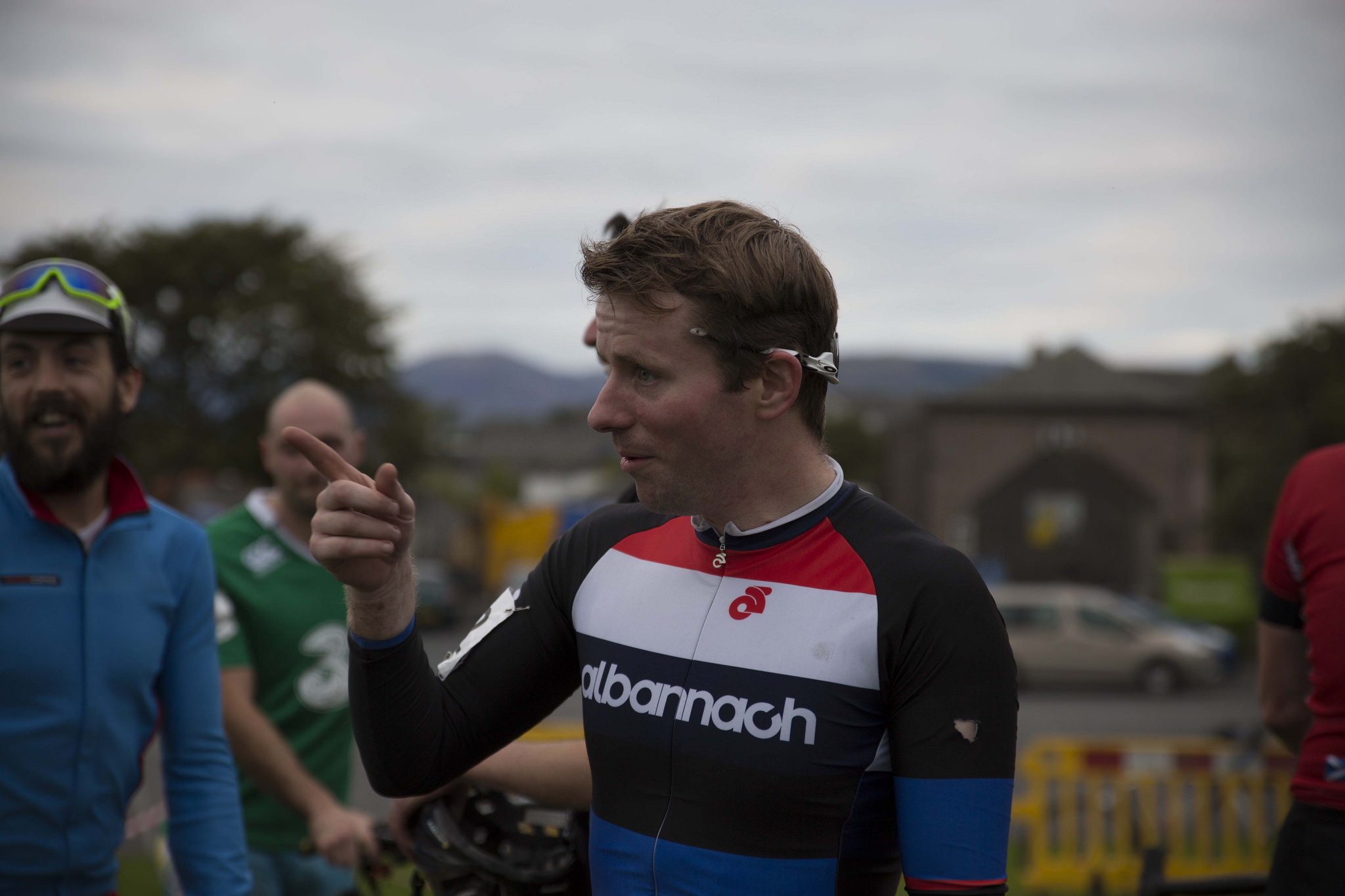 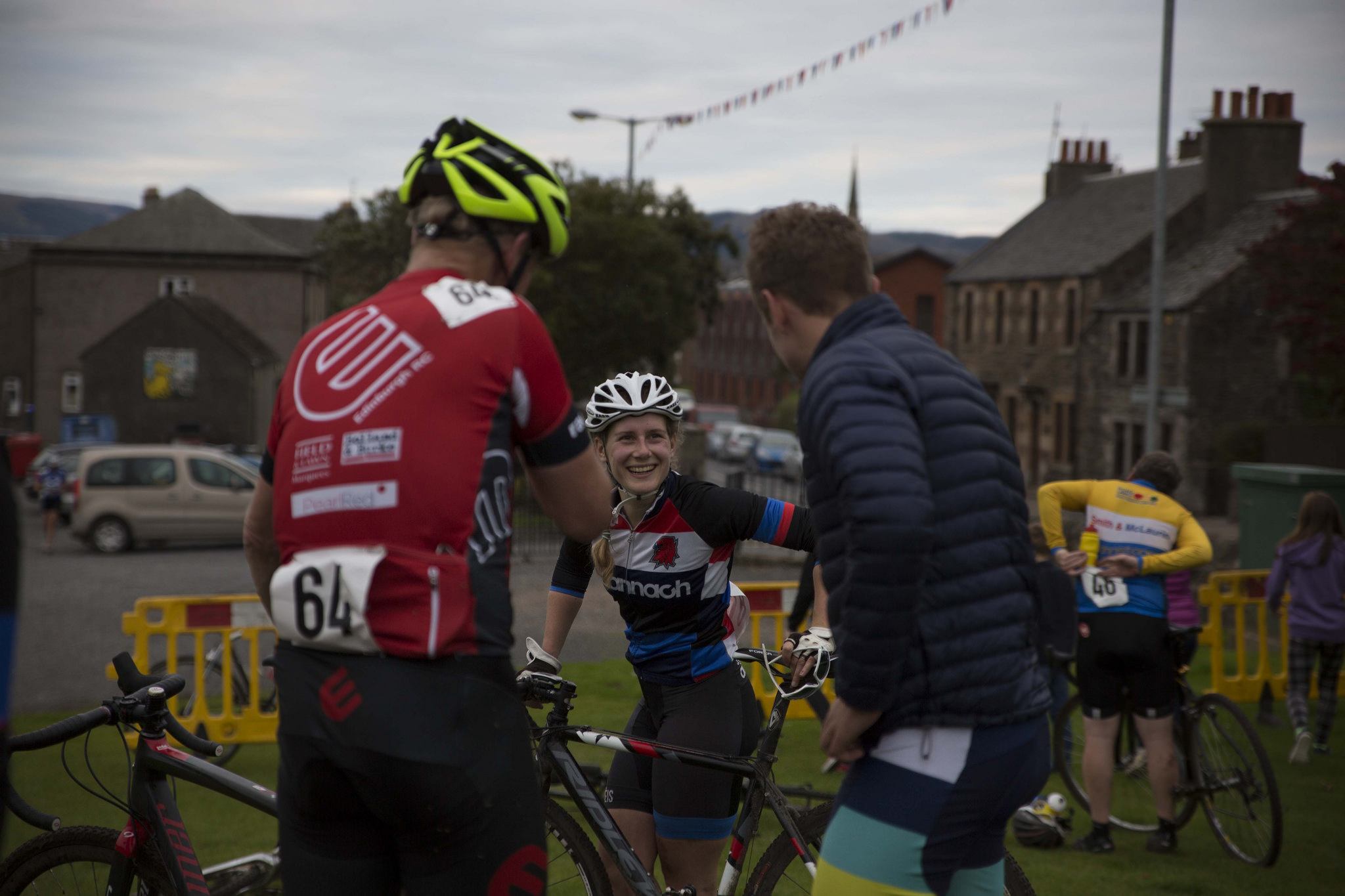 Like any other race the finish line was buzzing with riders and spectators. Some suitably bevvied and after, on the ferry and train home, so were we. It’s a course ripe for some camping and a second day of racing, that’s something I would truly love.

Thanks to #redisfaster superstar Euan Lindsay for his report of the third edition of Bute Cross. Gie him a follow – t : @euancx | i : @euanlindsay

Thanks also to Stuart Green for returning to the director’s chair for Bute Cross. It gets bigger and better every year and a really hope he can see it return for many more editions

Thanks lastly to my brother Ruaridh Cameron, straight out of university and super talented. Rhu was over taking photies at Bute Cross. Take a look at the gallery for more Bute Cross photies. – i : ruaridh__

Thanks for this fantastic report Euan. A great insight into what it feels like to ride a cx race!

Good ride Euan. Until next time 🙂