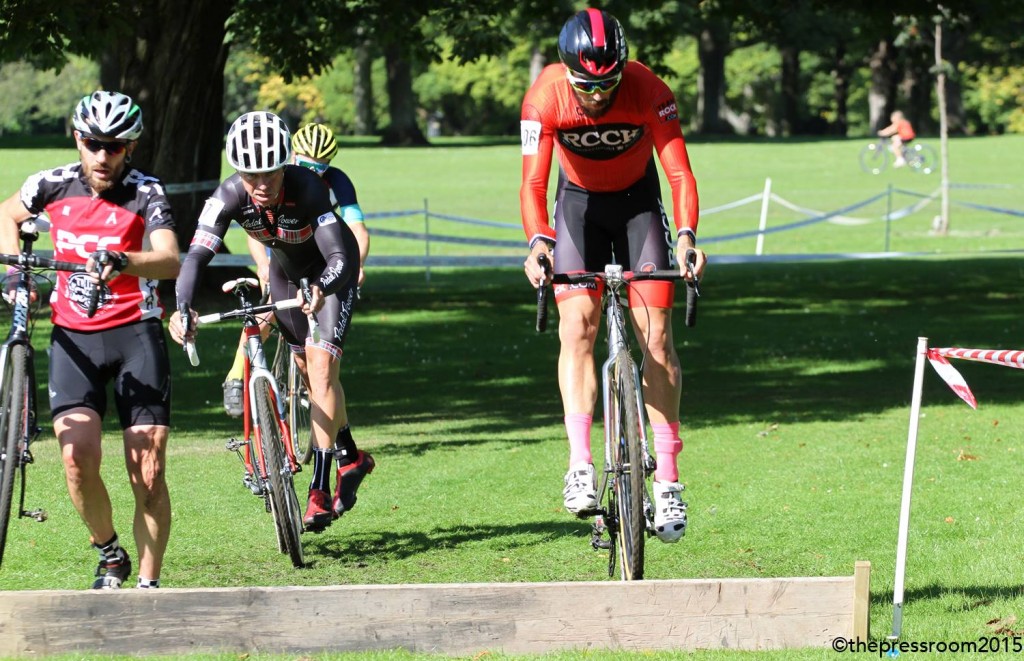 Get the skinsuits, aero lids and fancy socks out, cyclocross is finally upon us.  I gave road racing a bash this year; it was great. Except getting papped out the back in the neutralised zone in one race and then crashing and snapping my frame in another. Nah, it wasn’t that great actually, it was fucking murder. Since July I have been counting down the days to the first ‘cross race of the season and John McComisky (Portage Cycling / SR Albannach) didn’t disappoint us with the inaugural Beveridge Park Grand Prix. As soon as I seen it was John that was organising I knew it was going to be a belter.

I couldn’t wait to get up the road from work on Saturday, all day I had been thinking about off camber turns, dismounts and bunny hops. I was getting a proper chubby about racing again. Once I got home from work I exchanged pleasantries with the Mrs and it was ‘cross bike straight up on the workstand getting a tune up ready for going #volgas on Sunday. 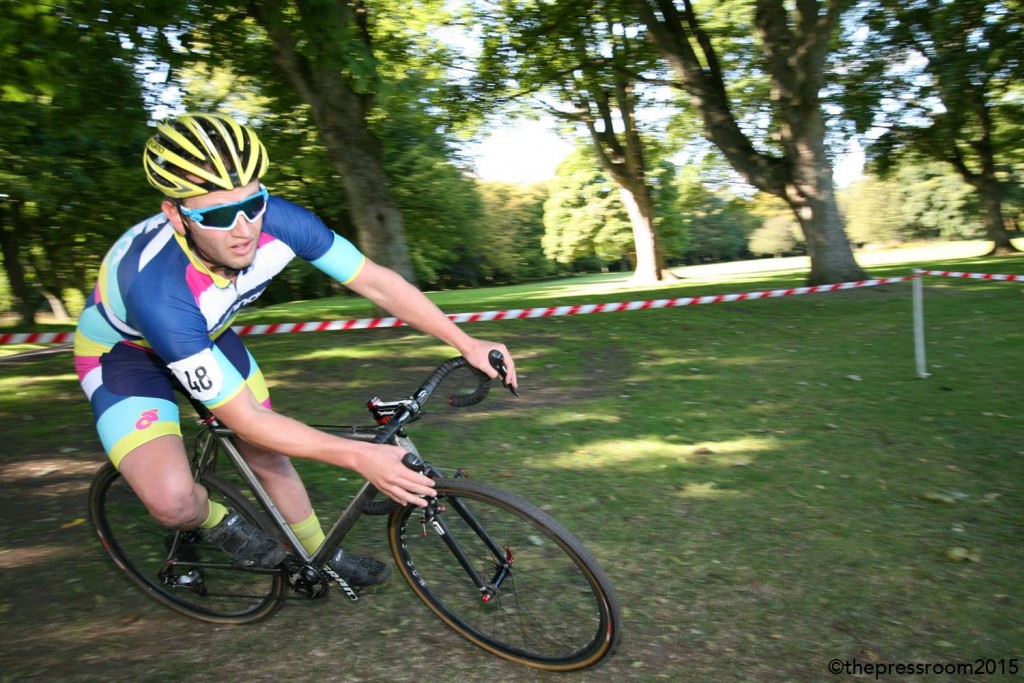 The first thing I did when I got up on Sunday was to fling open the curtains to check the conditions. Blaring sun, blue sky, perfect. I was excited; Lewis, my son, was getting excited too because he was going to the “special park” to watch Daddy race. We left in plenty time to get over to Kirkcaldy, enough time to check the course and warm up. I got to the end of street with the sun near enough blinding me, “it’s cool though”, I thought, “I’ve got new Oakleys to deal with that. FUCK. My Oakleys!”. About turn, back to the flat to get my shades.

As soon as we parked up at Beveridge Park you could feel that everyone was fired up. There were ‘cross bikes and spare wheels all over the car park. One guy was on the rollers warming up and I thought I must be late. Looked at my watch 11.45, race doesn’t start til 13.00 – I’ve hunners  of time.  The plan was to get to sign on, get my number and then get a look at the course. Everyone I bumped into said the exact same thing, “you been round yet?”, “nah man, I need to get signed on first”, “ohhhh it’s fast”, “it’s fucking fast man”, “it’s gonnae be baws oot from the start mate”. 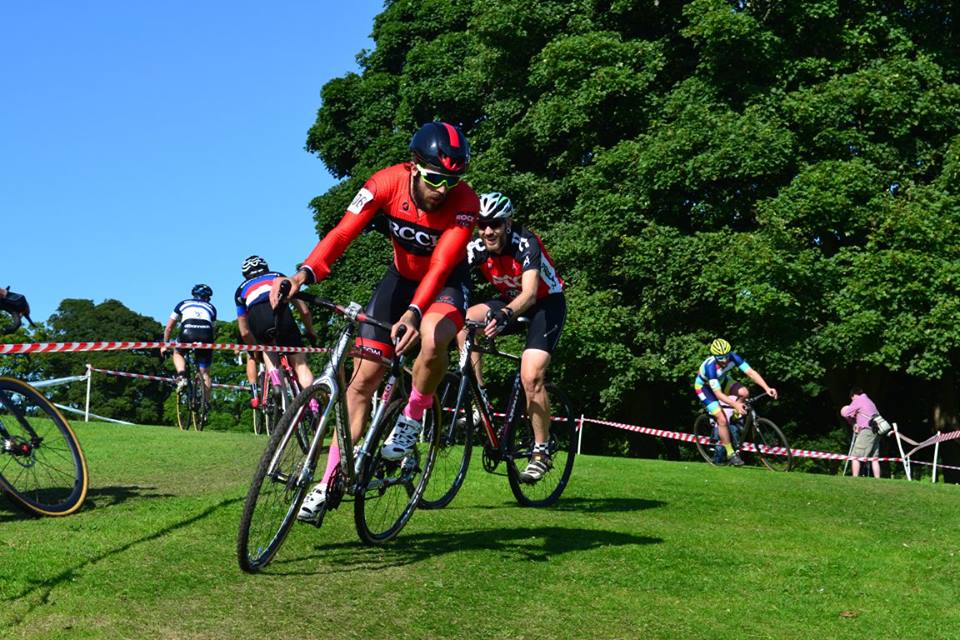 Skinsuit on and and number pinned, I eventually got around for a few laps before the start. I was taking it easy round trying to remember the countless episodes of #SVENNESS I’ve watched this past month. The corners were fast, the barriers were bunny hoppable, there was virtually no wee tricky technical bits. It was going to be flat out from the go. My flat out and Davey Lines’s flat out are obviously very different but it was going to be fast even for a middle packer like me. 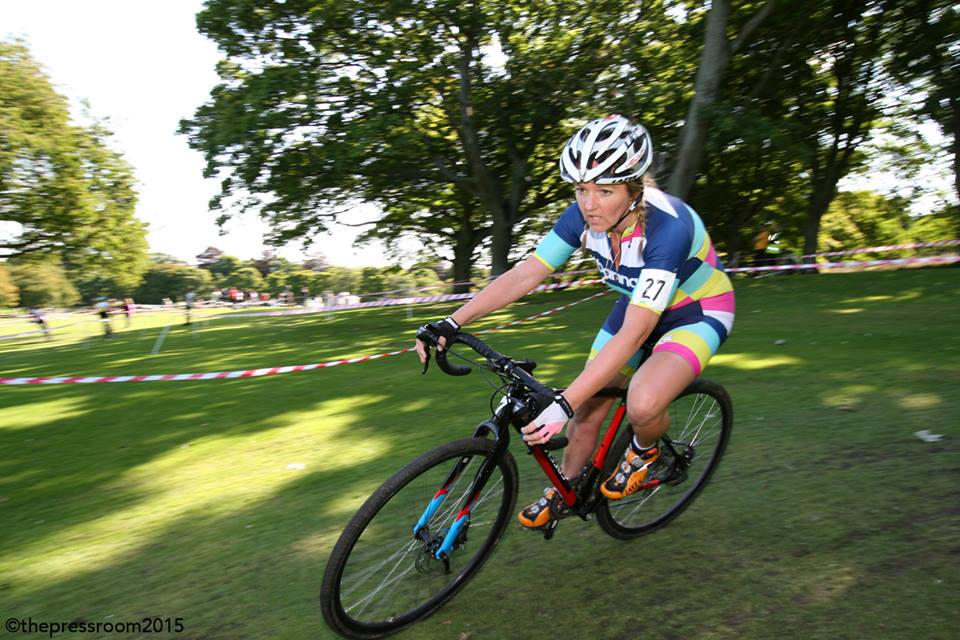 As soon as Guto comes on the mic you know its party time and minutes away from getting started. I poked my way through to get to the front of the group waiting to start. One thing I got told at my very first ‘cross race, 5+ years ago, was get as close to the start as you can. It’s been the only thing I can remember from when I was kicking about at ‘cross races in Lidl shorts and a borrowed mountain bike. Guto starts to go through the names of the riders being gridded.  A minute or two goes by and he reads out “Chris Barr”, WHAT DA FUQ?! I’m gridded? I’m fucking gridded, yasssss! The first time I’ve ever been gridded; it was a good wee two second ego boost.

“The start of the race will be in the next 15 seconds by the sound of a whistle”…..

That was it. We were off. Clipped in, in the drops, go go go go! It was carnage at the start just like every ‘cross race. If you’re not in the top ten riders at the first corner you’re getting held up. I got to the first corner in a relatively good position; if I was guessing I’d say top twenty. As soon as we got round the first corner I was already eyeballs out from the effort to get up in a decent position. The next two laps established the hierarchy of the race. The fast guys were already three or four corners in front. I started to figure out who was of similar ability and who I would be getting a wee race within a race with. I’d say there was about six or seven of us who were having our own, “nah mate, my dick’s bigger than yours” race. 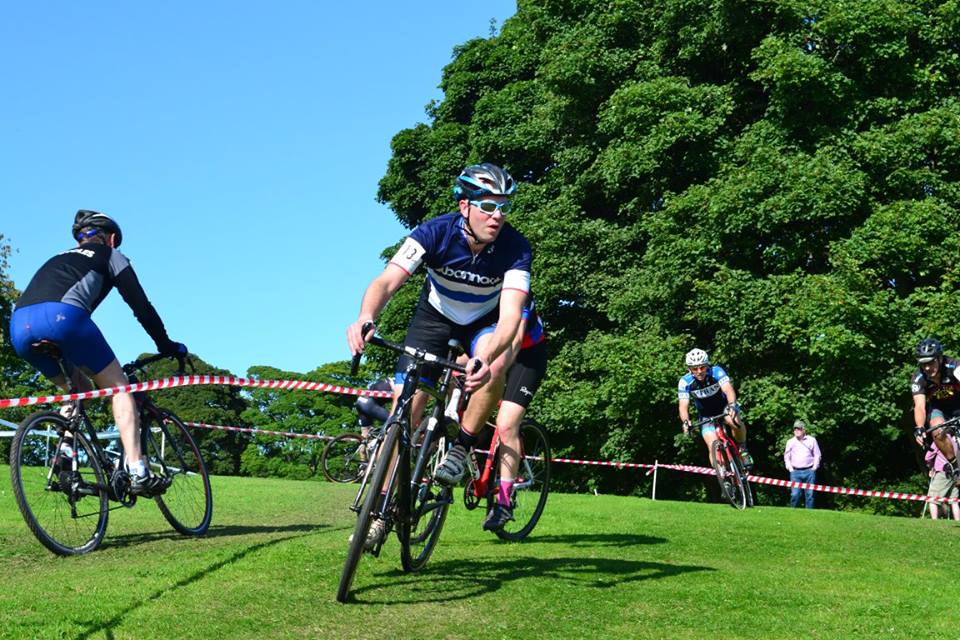 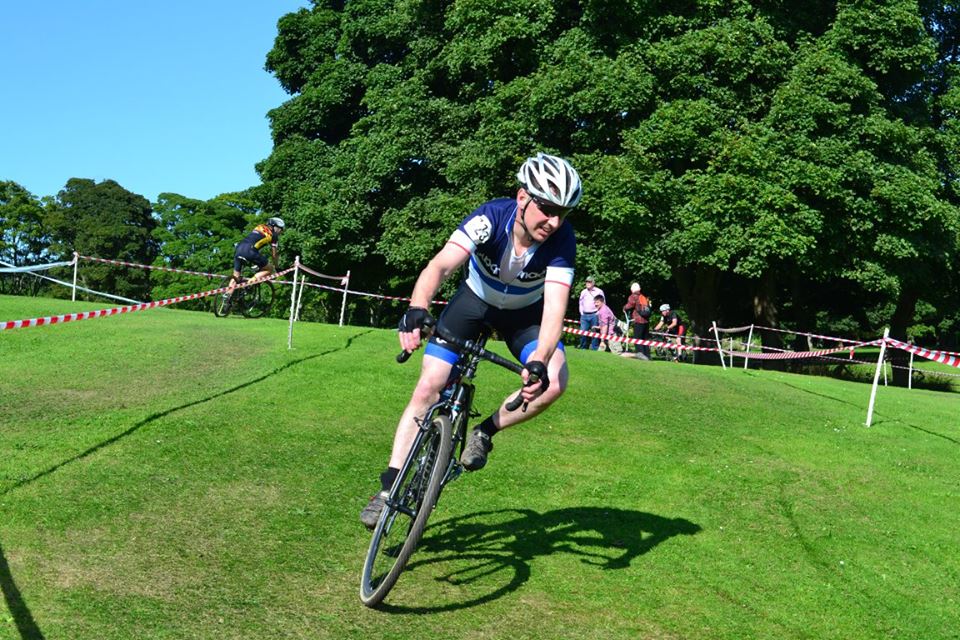 First couple of laps in and I didn’t recognise anyone I was with. Then I look over my shoulder and I see Mr Cameron (SR Albannach) himself. FUCK! I was giving him it tight during the week saying I was going to give him a pumping. I had no idea what was going on at the pointy end of the race and to be honest I didn’t really care. Then Euan Lindsay (Hardie Bikes) showed up to the party. It was great about three or four laps; we had a proper close battle. Jim was clearly a bit stronger than me on the main climb. Every lap he put in a little dig and I’d be chewing my handlebars trying to hold his wheel to the top. I was faster through the switch backs though, so I would try and take an aggressive inside line and give him a wee nudge so I could bunny hop the barrier. I can’t remember when but after a few laps I couldn’t hold onto Euan’s wheel and the gap got so big he was out of sight.  Me, being the smart arse that I am, I tried to bunny hop the barriers when there wasn’t really room to do so and clipped a wheel of a back marker in front. Before I knew it I was on the deck. “SHIT,SHIT,SHIT”, was all I was thinking, “get back on your bike ya fanny”. I hopped back on and both calves locked out with cramp. I spent the next 15-20 seconds stretching furiously, trying to get them to release. By the time I got on my bike again Jim and Euan were in the distance, just before the climb, were I had been struggling the four laps prior.  I took a lap feeling like a dick and threw the towel in a little. They were off and I knew I wouldn’t be seeing them again. Jim and Euan were looking strong I hope the two of them do well at Three Peaks Cyclocross (fuck that).

With two laps to go Colin Shearer (Velo Club Moulin), flew by me. I had recovered well after my lap of sulking and dug in to get onto his wheel. When he went by me I initially thought I was being lapped but was going to hang on his wheel as best I could. We had a a wee to an fro for the last two laps. He could hop the barriers so I wasn’t gaining any time there. Going into the bell lap I knew I had to attack somewhere. In my head I knew where I was going to do it. There was an awkward corner before the single barrier. If there was nobody in front you could save a second or two by bunny hopping. After hopping the barrier it was #volgas all the way to the finish. It was halfway through the lap so a two minute, flat out effort would get me over the line. 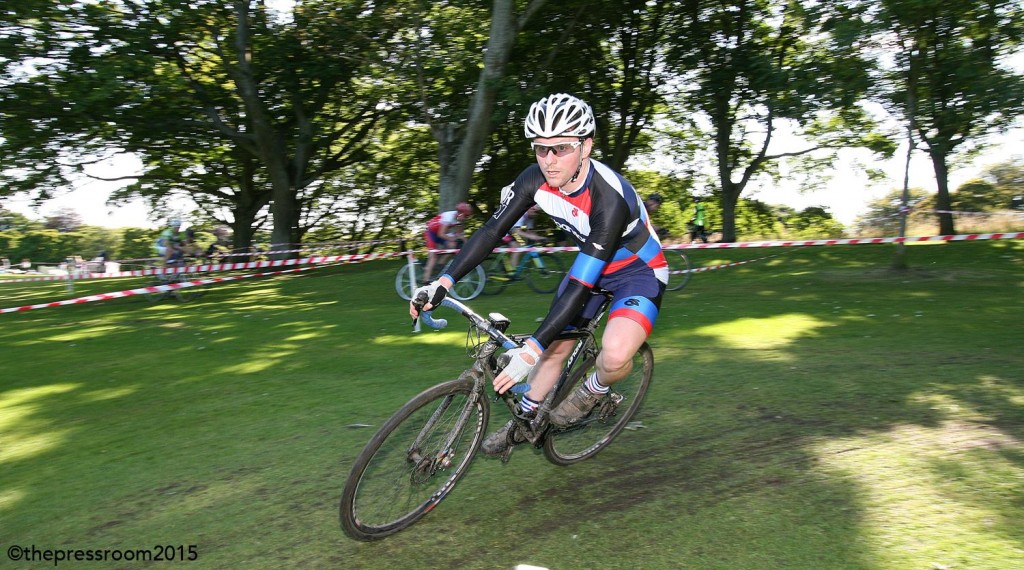 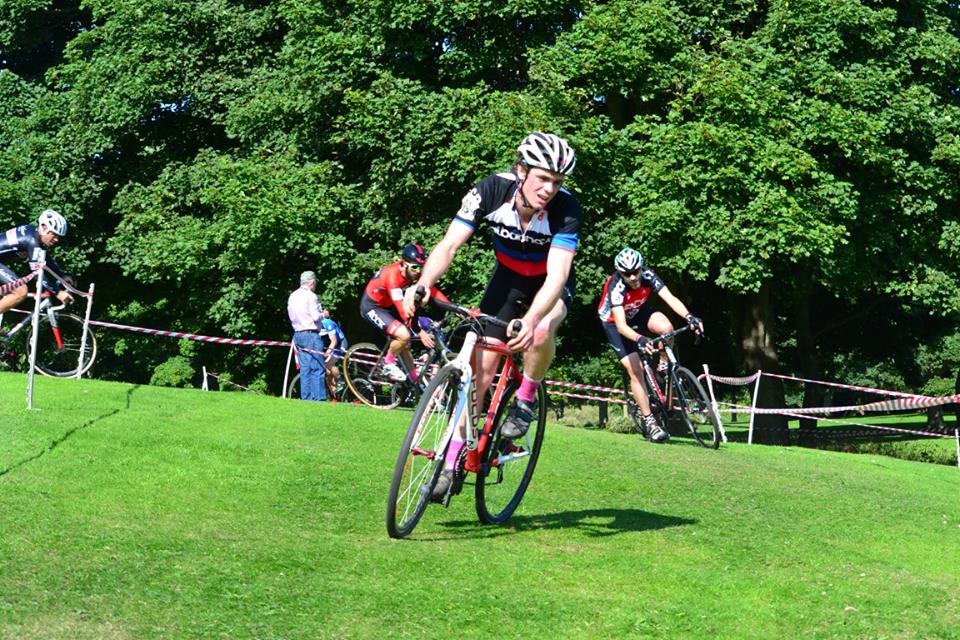 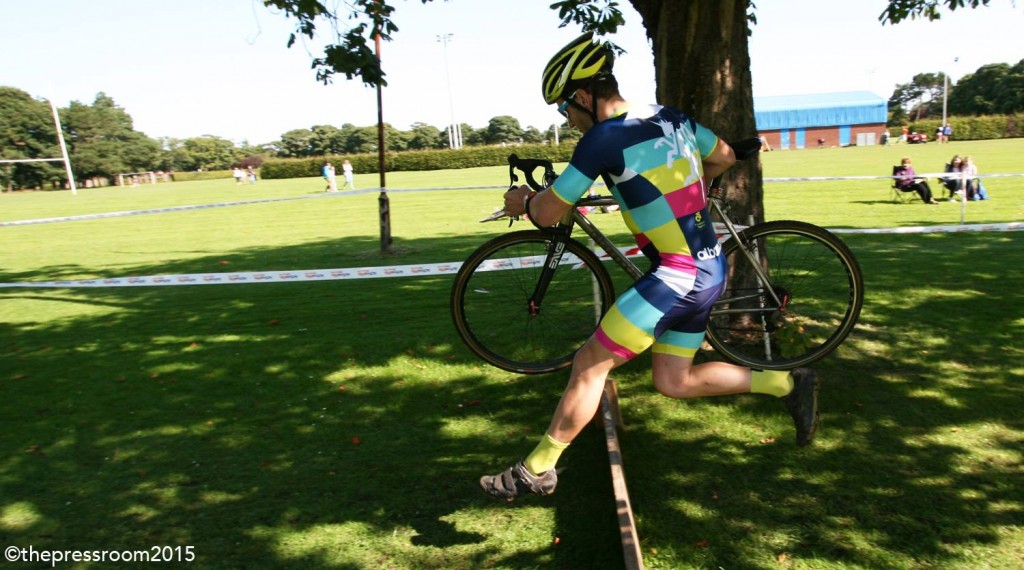 At the finish I was seeing stars and had to sit down. Lewis and Celine were at the finish and I knew she had an ice cold can of coke waiting; I demanded that Celine have one ready for me. There is nothing more pro than sitting on your hole, looking ten years older after a race sipping a can of coke.

The ten minutes after a ‘cross race is my favourite part of the event. You’ve not recovered fully but recovered enough to find everyone and chat shit about how fast the course was and how amazing the off camber turns were; “fast as fuck mate, fast as fuck”. JMC and his team absolutely nailed it. That boy knows how to put on a ‘cross race. Celine and Lewis haven’t been to many races to watch so BPGP is up there with one of my favourites. Every lap Lewis was shouting “DADDY, DADDY, DADDY”, it’s the best feeling in the world.

This is the earliest start to the ‘cross season yet but that as a season opener was an absolute cracker. It’s going to be a long season of pumpin’; hopefully I can be the pumper next time.

Thanks to the man, the legend that is Chris Barr for his report of the season opener at BPGP. May it return with gusto. Gie him a follow –  t : @chrisbarr | i : @baws_oot 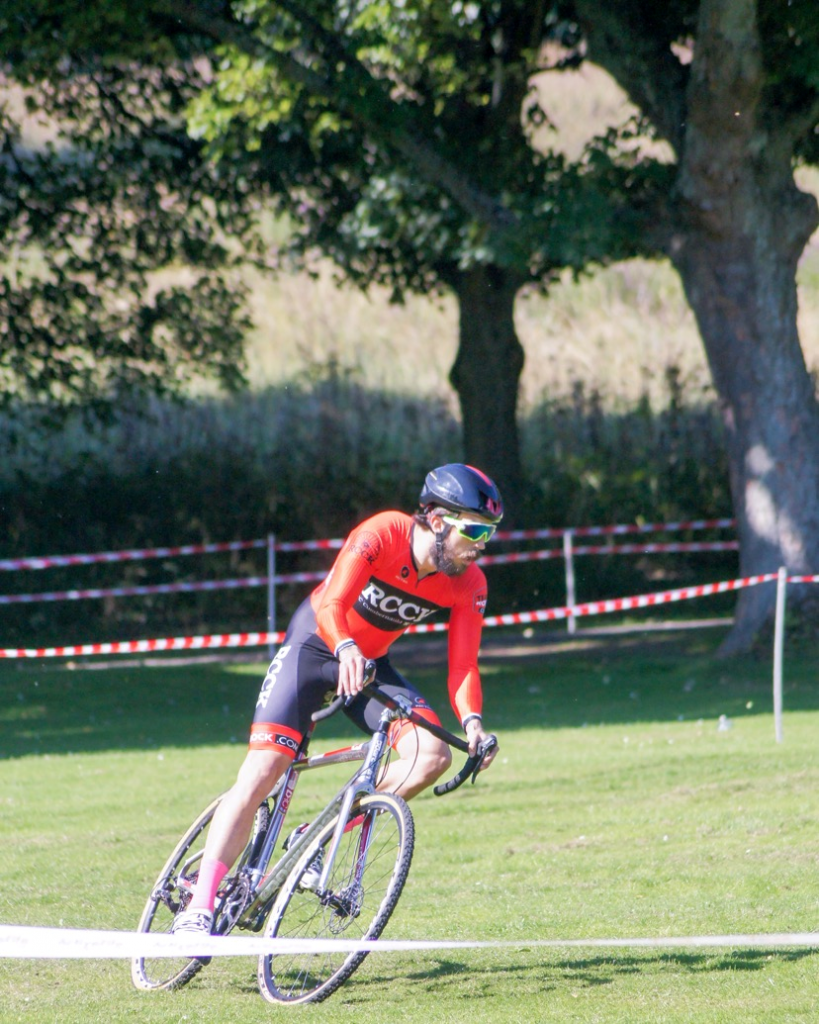 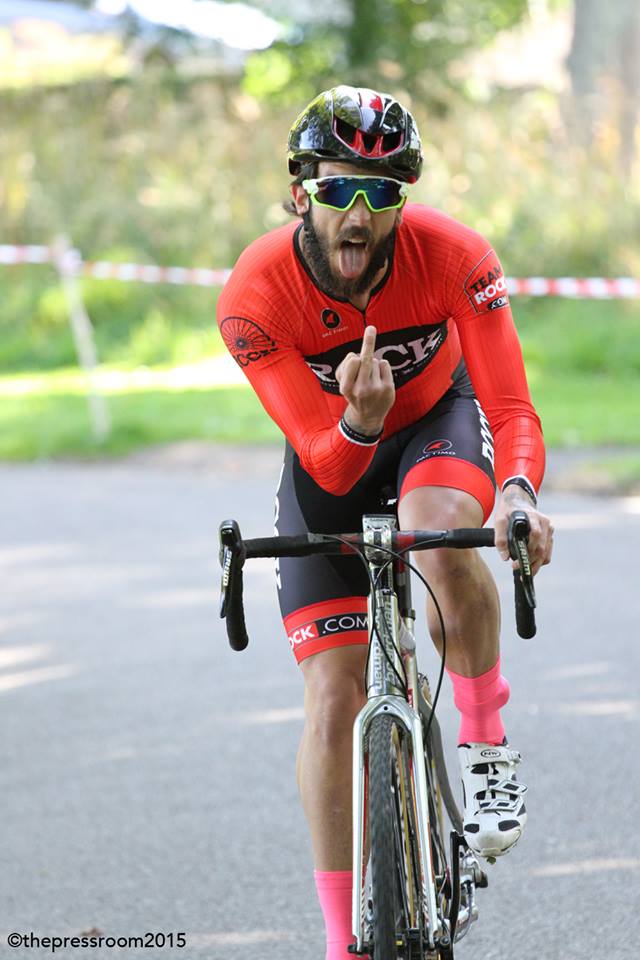 That is shooting from the hip, brilliant…fucking poetry dripping fi the heart of a lion of cross x

Quality , Very Eloquent .
That noisy BB cost you those places 🙂