Its a ‘cross race but not as we know it. No Jammie, LOADS of carrying and, well, a bit longer than the usual hour or so.

The 3 Peaks – billed as the toughest, biggest cyclocross event in the UK – has been run in the Yorkshire Dales since 1961. I’ve only been doing it since 2014. Aye, this was my second go, I’m not exactly a veteran.

Last year was brilliant, as soon as I finished I was already thinking about this year’s race and what I was going to do differently to go faster. I just wish I’d written some of that down.

It’s a beautiful part of the world, Yorkshire – in fact I can’t see the point travelling much further south unless you’re going to France. We made a family trip of it last year and everyone was up for the same again this year. I managed to rent a bizarre wee cottage (complete with Farfisa organ and stuffed fox head) on the edge of Horton so the support crew didn’t have to go venture far (to hand me a bottle before Pen-y-ghent). 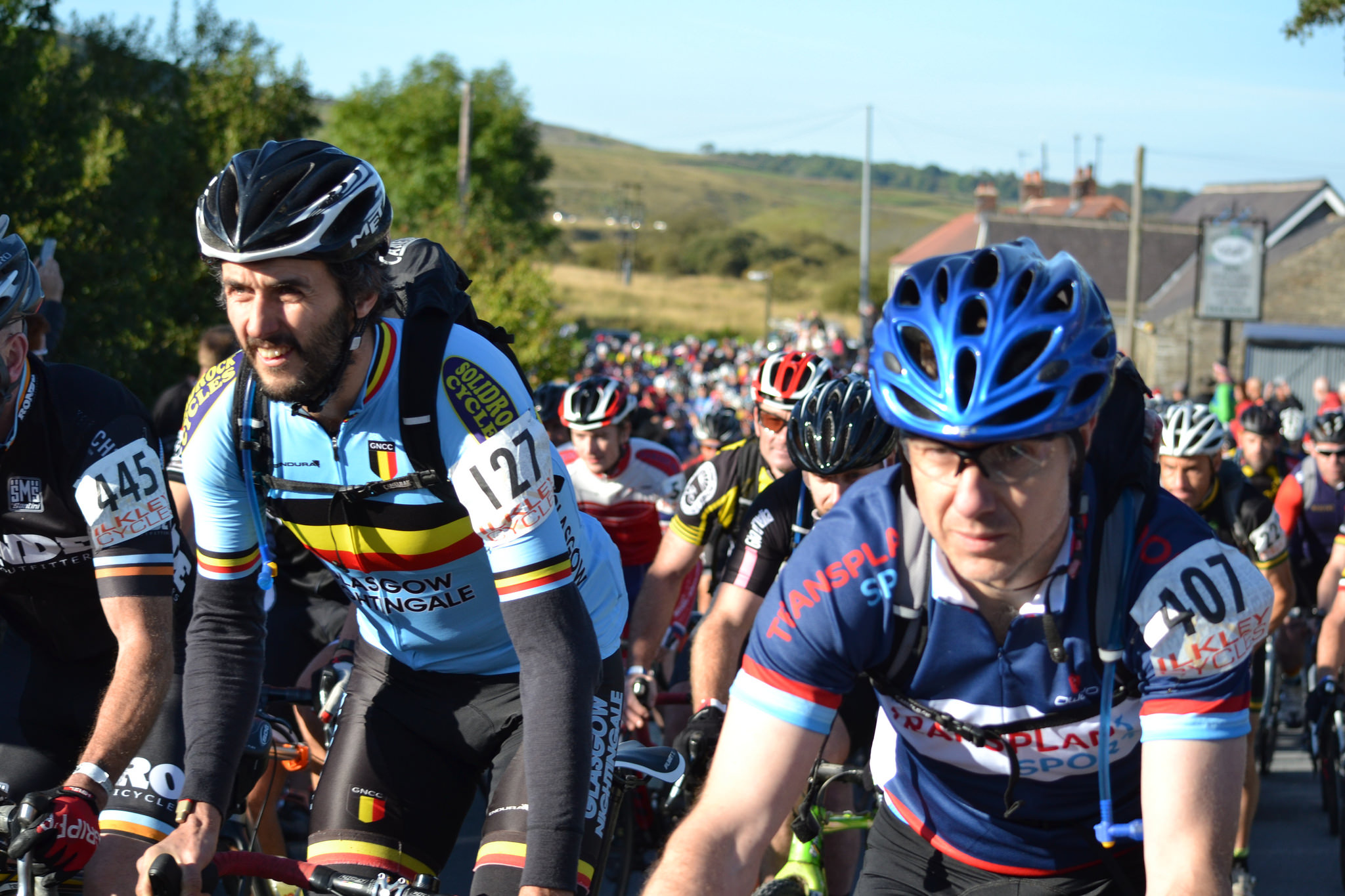 The race is, frankly, a bit mad; it’s certainly unique. How they get a risk assessment signed off I do not know. Maybe they don’t bother. [Get on with it, lad.] There’s a handful of rules aimed at keeping the integrity and originality of the race intact; proper cross bikes only, tyres no wider than 35mm, no cameras, no changing bikes to suit changing terrain – but other than that, it’s got a brilliant no-frills, northern feel to it. Nowt fancy, sign on in a tent, paper number on the shoulder, then all 650 riders start en masse on the road outside a pub in a tiny wee hamlet, held back by a rope across the road. They grid about 10 riders on the front row – previous winners or those who’ve come close – then you’re off.

The course is 38 miles long – which doesn’t sound like much, but there’s at least 4 of those miles they say you can’t ride. Add in the 5000 feet of climbing and you can begin to see what you’re in for. Oh yeah, and they make you carry a survival bag so you DON’T DIE before mountain rescue reach you.

So the course goes a bit like this – start, over the bridge, turn left, road, bumpy farm track, through a farm, across a field, up a comically steep hill, over a wall, across a grassy plateau, up again, across a rock-strewn plateau to the summit, down the steep bank on the other side, down a rocky track for a bit then off to the side down a long grassy descent interrupted by bogs to meet the road. Ingleborough, Peak 1. Nice long fast road descent, then a sharp turn and the road climbs and rolls for a few miles, off the road onto another farm track towards the foot of Whernside, Peak 2. England’s strange land access laws mean you have to dismount then walk your bike 50 yards or so before getting back on for a minute, then off again to start climbing the stone steps up to the ridge leading to the summit. There’s about a million of these steps, and it’s steep. Along the ridge, past the summit then down the flagstone steps, then a steep gravelly/rocky or tussocky/grassy (your choice!) descent to the flowing, stony path taking you past Ribblehead viaduct and down onto the road. Six miles of rolling road, back through Horton to the foot of Pen-y-ghent Lane, the landrover track that takes you up Pen-y-ghent, Peak 3. You can ride a fair bit of the way up before it becomes another hillwalk with a bike on your shoulder. Up the top, turn round then straight back down the way you came. Stick to the left. Out onto the road then #volgas for a couple of miles to the finish. Nae bother.

A good few familiar faces approaching the start line rammy – Maddy Robinson (Velo Club Moulin) planted right on the front following her awesome podium of last year, along with a load of other VCM stalwarts (I must confess – I’m terrible with names and have it in my head they’re all called Simon. They’re not.) and their support crew, they’re clearly taking this seriously, Elizabeth O’Donnell (Glasgow Green CC), Crawford Carrick-Anderson (Peebles CC) as well as a bunch of Deeside Thistlers. Shuffling my way back from the front, I meet Crawfy and decide that’d be a good spot to start from, so wait til the chap I’m squeezing past looks away then plant my bike like I’ve been standing there all week. Bit of shuffling, bit of laughing and we’re away. 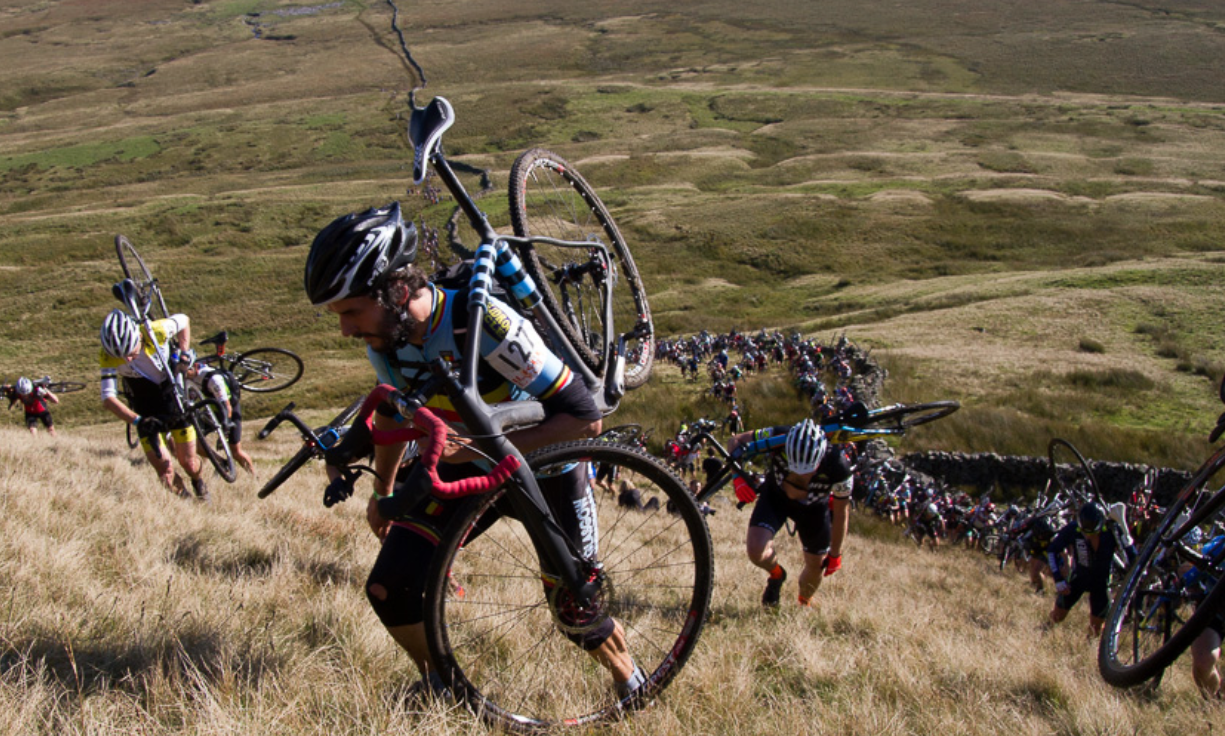 My new bike’s nice and light – despite the heavy Landcruiser tyres popular at the 3 Peaks – but there’s no getting around the fact it only has one gear, which makes the road sections hard work but I was rolling along OK and even managed a wee chat with Euan Lindsay (Hardie Bikes) and then Colin Shearer (Velo Club Moulin) along the way. The climb up Simon Fell, the mad steep bit in all the photos, makes you fear for your Achilles tendon but the weather was so good and the views so lovely it was almost pleasant. Almost. The rest of the ride/hike to the summit is good fun, even without gears and passing the summit of Ingleborough I felt good, especially given the spectacular fog in the valley below. Could have been a cloud inversion, nobody was really stopping to discuss it. Bit of knowledge gained last year meant I slid down the steeper side on my bum rather than step down all the rocks on the path to reach the descent. Well done me, eh. Well no, because I’m rubbish at descending on the cross bike. “Left, Jason” and Colin Shearer flashed past me like I was standing still, and he wasn’t the last rider to do that. Managed not to crash into any of the bogs and enjoyed the last bit but was relieved to reach the road so I could go fast again.

Passed Colin back on the road and a bunch of other folk in various groups, feeling good again and boxed on towards Whernside. The climb up the stairs is a trudge, but everyone feels the same and there’s good chat on the way up. Nice to get back on the bike and over the summit, then the less-than-pleasant sight of an unlucky rider with blood on his face awaiting the air ambulance. The folks helping him were relaxed, so hopefully nothing too serious but it was dramatic-looking. Knew it wouldn’t be long and sure enough Mr Shearer came flying past again, riding the stone steps fast and with a lot of style. Chapeau, nobody seems to like them much. I decided a series of slow-motion comedy crashes was the way to tackle this descent, and rounded the unedifying spectacle off with a faceplant that had me checking my teeth were still there and my nose was still straight. Got it back together again on Blea Moor and enjoyed the fast gravel path descent back to the road. 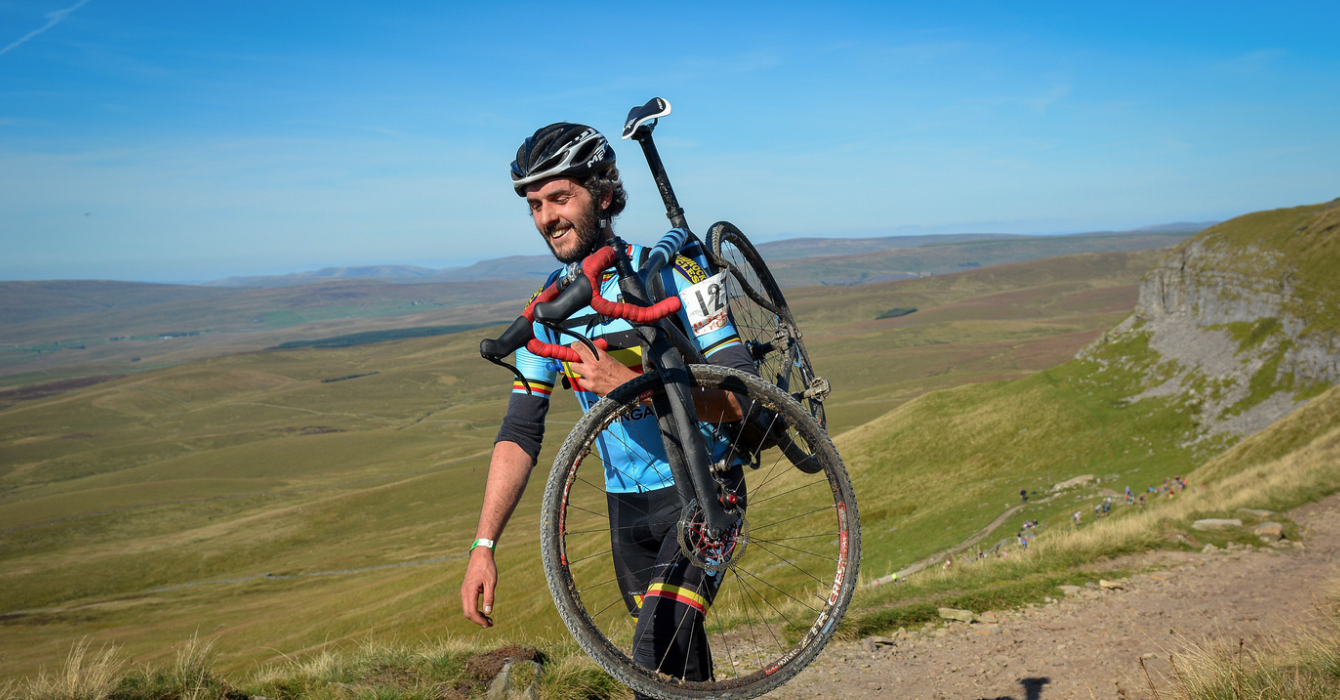 I might be in a minority loving the road sections, but I think they’re great and got motoring again, back towards Horton where I knew there was a bottle waiting for me. Cue rage in Joe, my youngest, as I took the bottle but failed to acknowledge the banner he’d made for me. Terrible dad. On to Pen-y-ghent Lane and who’s that I spot ahead of me in the cool kit of VCM? This time victory would surely be mine. Thrashed my way up the lane as far as you can ride, then put the bike on my shoulder and began the hike to the top. If the crashes and general misery of the experience hadn’t told me just how bad my descending had been til that point, then the sight of Crawfy – someone who can descend a bit – pinning it down the track towards me spelled it out. He was belting down towards the finish and I still had a fair way to go. That got me moving a bit quicker and it wasn’t long til I’d reached the summit cairn and was slip-sliding my way down the grassy top. The track down Pen-y-ghent is a brilliant descent and for the first time I felt as though I was riding downhill well, but I wasn’t entirely shocked to see Colin pass me AGAIN. I figured if I kept him more or less in sight then I’d catch him again on the road. That plan worked well for 30 seconds or so before he disappeared, he wasn’t hanging about. Back out onto the road and it’s a 2 mile sprint for the line. A spinny sprint for me. Up the last rise before the finish and I’m back on Colin, surely now I’m going to win this epic duel. Well… no. Too keen to take the long way round a stopped car, the grizzled VCM veteran (!) nipped through the short way and outsprinted me over the bridge. Next time Shearer, next time. Ended up with 4 hrs 6 min, bit quicker than last year but annoyingly still outside the sub-4 barrier.

Sorry if this report takes as long to read as it takes Gary Macdonald (Hope Factory Racing) to actually ride the race (an outrageous 3 hrs 17 min), but it’s that kind of race. One of a kind. If you’ve thought about it but not done it, just get in there and I’ll see you next year. But next year I’ll be faster.

Thanks to the Beardy Man*, Mr Jason Barnes for his report. I was gutted to miss 3PCX at the last minute and this report has only stoked my fire to do it next year. * coined by Mr Euan Lindsay

Results from 3PCX 2015 can be found here though a quick summary of the SCX casuals can be seen below. (Apologies if i’ve missed you off, it’s a long list!)

Great article. I’m going to be doing some fixed/ss cx riding on my LeMond Fillmore (trying to justify a Dosnoventa Helsinki or other proper SSCX bike with cantis…). Any idea what gear Jason was on? Got a 66″ free and 74″ fixed at the moment, just wondering what other SSCX riders are using.

Hi Gav – I’ve currently got a 39t chainring and a 17t sprocket, think that’s about 62″? Feels about right for most Scottish CX courses. Previously had 65″ which I found just a wee bit too big.

My fixed gear I ride day-to-day has 82″ – fine on the road but I wouldn’t be riding through too much mud with that!

Thanks for the reply JasonB, much appreciated.

I think I’m probably about right on the 66″ then as I’ll mostly be riding on hard-pack/solid trails due to the bike not really being designed for CX (almost low-pro geo, road tyres and callipers). the 74″ is my commuting gear, but it’s that short as I do pretty much everything on the fixed bike so on that I can get over the Crow, Pipetrack, Sydes, Greenlees, up to Kippen etc. (not braved the Tak yet…). Even did the Rise above Sportive on it (70″ for that though). First SSCX ride tonight to see how it goes, looking forward to it!

Congrats on the result at 3pcx, was a perfect day for it! I managed just under 5hrs for my 1st attempt but will be back next year (hopefully) on a SS.

I’ll need to catch up with you at a SCX race and get some SS tips & tactics! Strathy tomorrow, looks like it’ll be proper CX weather (for a change)