My task list is checked off, all the riders are informed of the event timings, all my marshals and volunteers are confirmed all that’s left to do is do it.

For the past few weeks i’ve rarely thought about anything else. Last year, being the inaugural year I felt like I had put alot more time into it, most of which would have been course design. This year though I knew I had the course pretty much set, it would just require a change here and there to reflect the feedback from last year. Mostly revolving around the uphill barriers and a certain lack of rest. With this in mind myself and Euan had set out to find i) a good spot for barriers and ii) some rest for you all. There are features of a course that you simply cannot change and some that you just don’t want to change; the run-up and the dead-turn descent into bowl ascent both had to stay. They form most of the spectacle of the race and the unique ‘amphitheatre’ that RGCX has. To take you into the mind of the course designers – the run up is our intentional heart rate spike, the second climb just after the run up was made as wide as possible to avoid at all costs the need to run (and spike heart rate). The dead turns were then compacted slightly to allow a diagonal ascent out of the bowl, without the need to run (last year we descended all the way to the bottom of the bowl and only the strongest riders could ride out, everyone else was running again) to finally lead into the only suitable position for a set of barriers, just after the pole-assist deadturn. 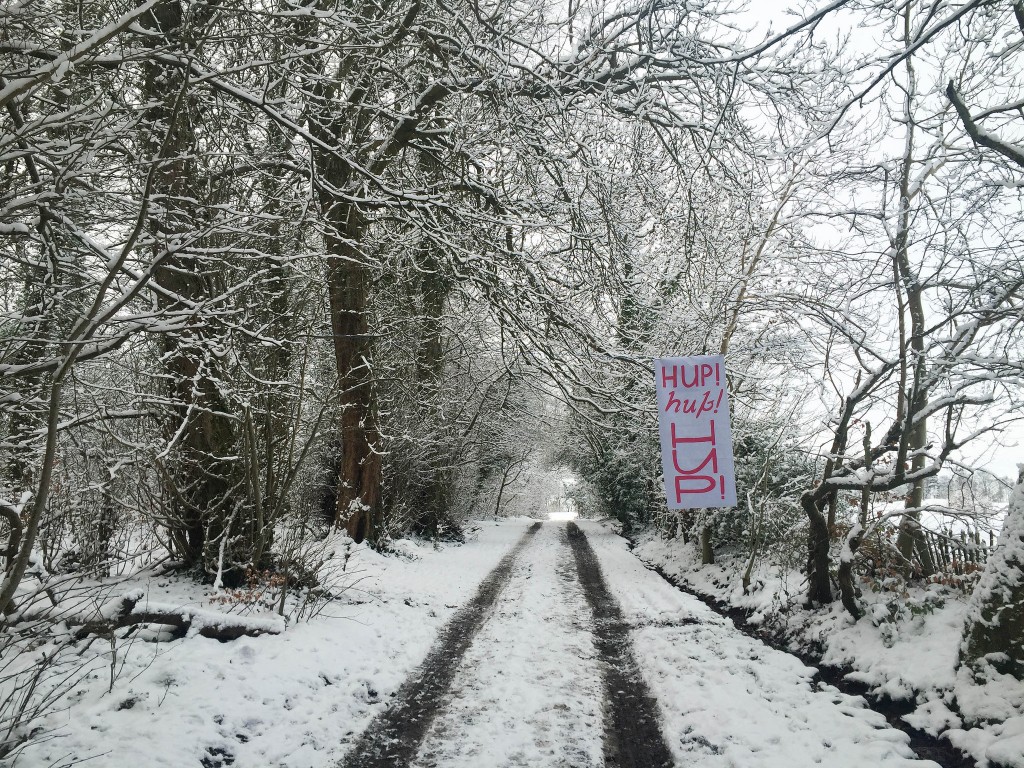 This then brings in the requirement for rest. We removed two descent/ascent sections from the north end (the far away end) of the course in favour of the new barrier position and also utilised the smooth track up the centre of the north end for ascending back to the rim of the bowl. This is were the big change came. Storm fall in the west woods had meant we could not enter the west woods from the rim of the bowl and ascend through it to the golf course track, as we did last year. Instead we would enter the west woods from where we exited last year and descend all the way through the west woods, from south to north spitting us out onto the upper rim of the bowl. The ascent to the west woods is defintely a more difficult section than what had been taken out but it rewards with a [insert American superlative adjective] descent in the west woods. In there lies the mantra for the whole course design; stoke through boke. Every single section of this course is intentional. 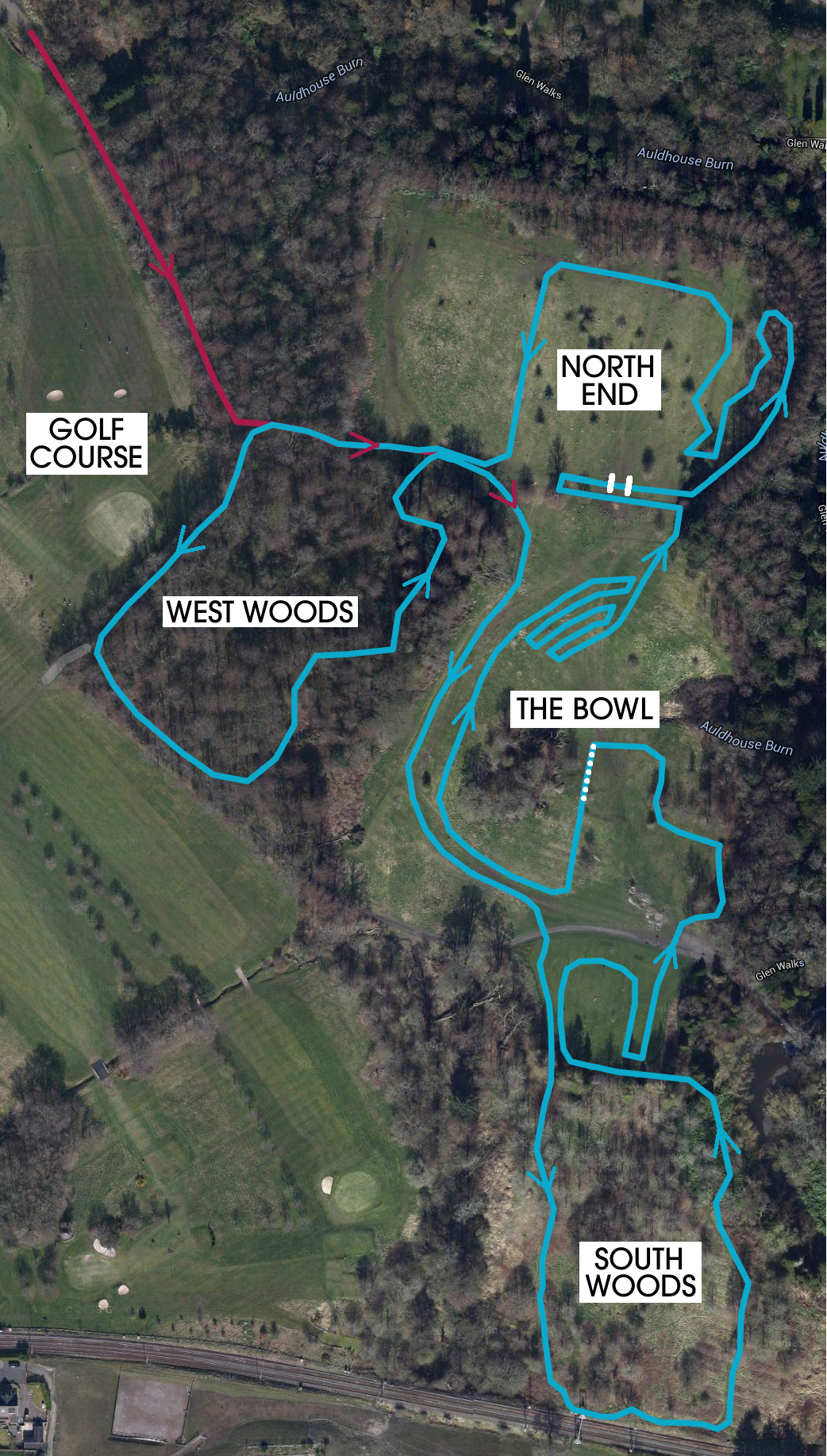 This is why, come Saturday morning when welcomed to the ‘high meadows’ in a state of early perma-frost, quickly followed by an all day dump of snow, the great panic set in.

I like to think i’m pretty calm but in truth i was losing my shit a little bit on Saturday morning. A good dose of us started smashing through the course build, it’s only 2.25km long but with the current conditions it was going to take at least all of Saturday if not a bit of Sunday. We cracked on with the raking of the west and south woods – i think this is pretty key, not that the odd branch will do damage it’s more to unveil hidden roots. I like to think all respectful organisors fully review their course terrain; some of their riders are coming with spendy tubulars after all. Barriers up, the north end and both woods staked and taped and then the good shit, King Jai MC of Bo’ness arrives with what is going to really set this course alight, the scrim. There’s only one place this is going, the Rouken jump and descent into WEST beer run-up. We leave and the course is looking the tits, pretty much 80% of the course is ready and the promise of an early morning setting out with more helpers calms my nerves. A few beers with Tim at the flat and some calming phonecalls from some of the other guys helping out and importantly Mark and I’m pumped for what tomorrow may bring. 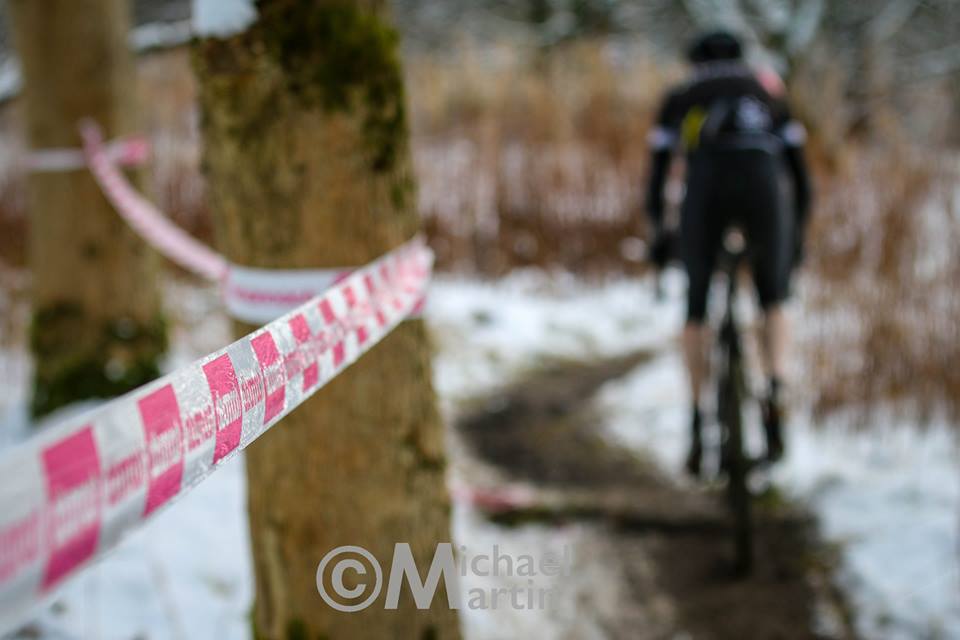 I get up to the park to find the snow had stopped last night and thankfully the ground had softened up a bit. A load of the SR Albannach are there taping up the left overs as I arrive and we smash the rest of the course. This shit is coming together. Dales with the sign-on arrive, Mark lands with timing and Alan has just beasted up in the hire van to get the beats going, this is actually going to happen. The first rider arrives and questions, which way? That way, down the jump you go! This is now happening.

I start firing through all the fiddly bits, cash into the envelopes, the right envelopes in the right bags, add an SRA cap to each, make sure sign-on is going OK, numbers on the right arm, sponsor banners up, WEST beer tokens out, beer boxes at the ready, mini horns assembled, clothing buckets down to the start, everyone has chips on, everyone knows how to get to the start, whisky to Alan, bell to Mark, BBH go here, Renner go there, Dales go there, car park to venue signs sprayed, marshal briefing, marshal hat distribution, marshal placement, the right gates closed, the right gates opened, start buckets are ready for the 1 minute to start rider strip down, riders in place and awaiting the start, race brief, radios crackle, Mark is ready, the riders are ready, 10 seconds to start – BOW-BOW-BOW-BOW-BOooooW goes the hooter and my work here is done. 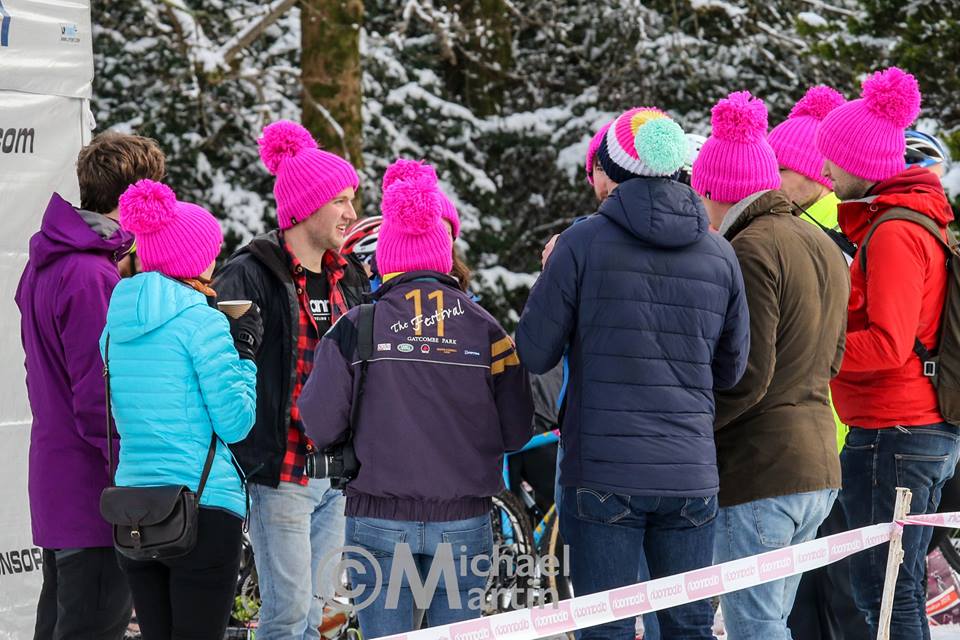 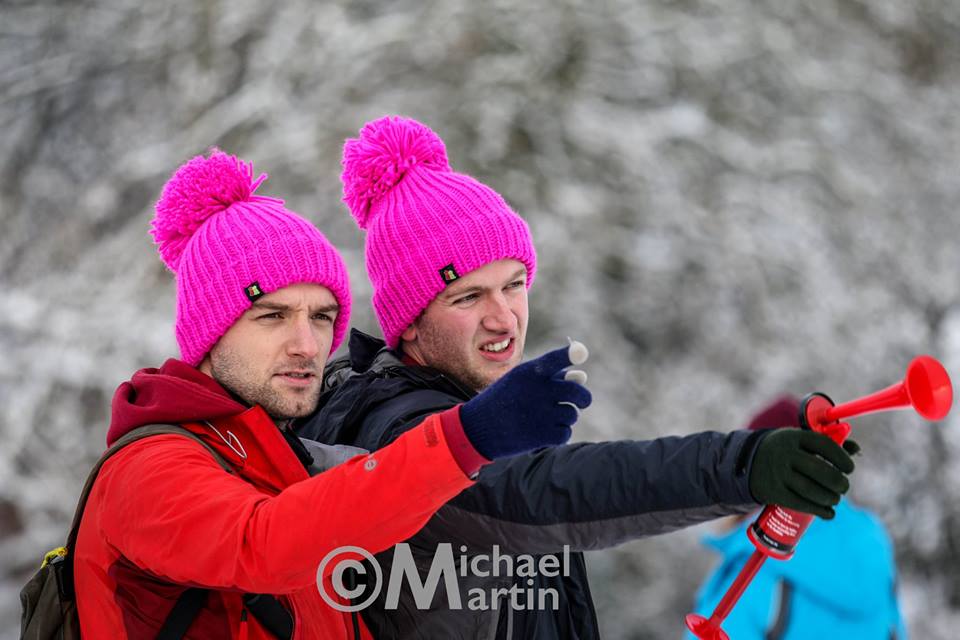 Over there Tim x Michael Martin

Once the race starts I feel utterly elated and relieved at the same time. I get back up the course making sure the marshals on the gates have closed where they need to (thanks again Morven for the lend of the SC radios) and seek out the faces of the riders coming through the west woods for the first time – they all mirror pure stoke and now I can relax. The rest really is out of my hands, the epicentre of stress really is just, get the race started on time, make sure it’s not a total fucking disaster.

From there on, the A race is just a fancy repeat of the B race but with faster riders, pit bikes, more divas and a grid formation to negotiate. There’s probably a bit of work to be done on organising the mustering to start line as I had to ask people to shuffle back a bit. In hindsight I could have easily just shuffled the grid forward a touch. Perhaps next year I’ll negotiate with the golf course to tape off a small trail off the road to allow riders to get to the muster area without riding down the start chute and through the grid, mustering downhill of the grid. 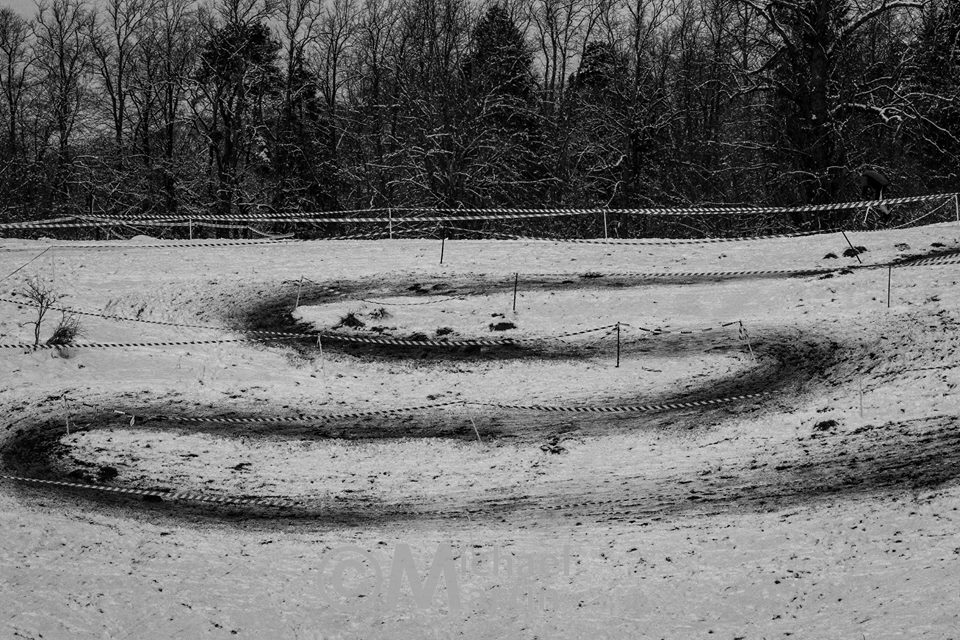 From a personal point of view I think we just about have the course dialled, it’s the event that needs a wee bit of a polish. There’s little we can do about the distance to parking (I personally don’t see it being any further than the parking at Cally Park) this can really only be made less painful through clear signage from the three parking locations to the sign-on. Vendors; firstly I make apoligies to Renner and BBH, I will make this right for next year. Food stalls; my great want for RGCX is to have food vendors though, understandably our hosts cannot allow this as it would be seen as a conflict due to the resident café in the park. I am planning to negotiate with the café to get them to bring over a satellite stall to sell soup, beverages etc. they must see the potential there. Not to heavily invite the barrage of hate mail but I’d love to hear feedback on how we could make our event better for you.

Last year I was the new kid in town joining the SCX Organisor Brotherhood, putting on two races (ButeCross and RGCX). I thoroughly enjoyed both experiences and trully thought, hey this organising races gig is easy and fun. It’s not easy but it is incredibly rewarding. RGCX to me became a victim of it’s own success this year with 200 riders paying for entry (with over 100 riders on the waiting list) and selling out in 26 hours mounted a huge amount of unexpected expectation and pressure to deliver a race that not only challenged but entertained. Stoke through boke.

I hope we did that. 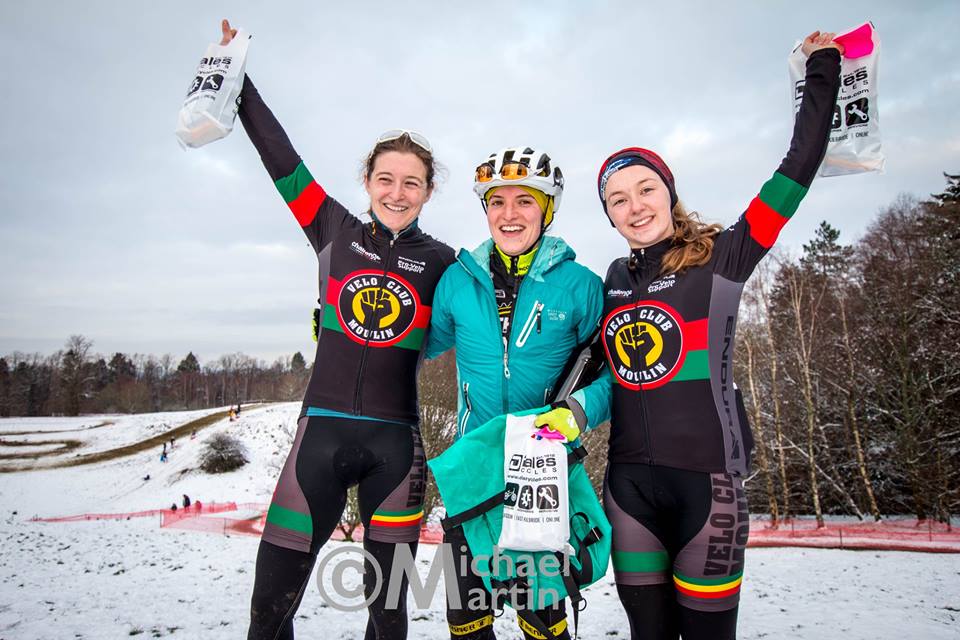 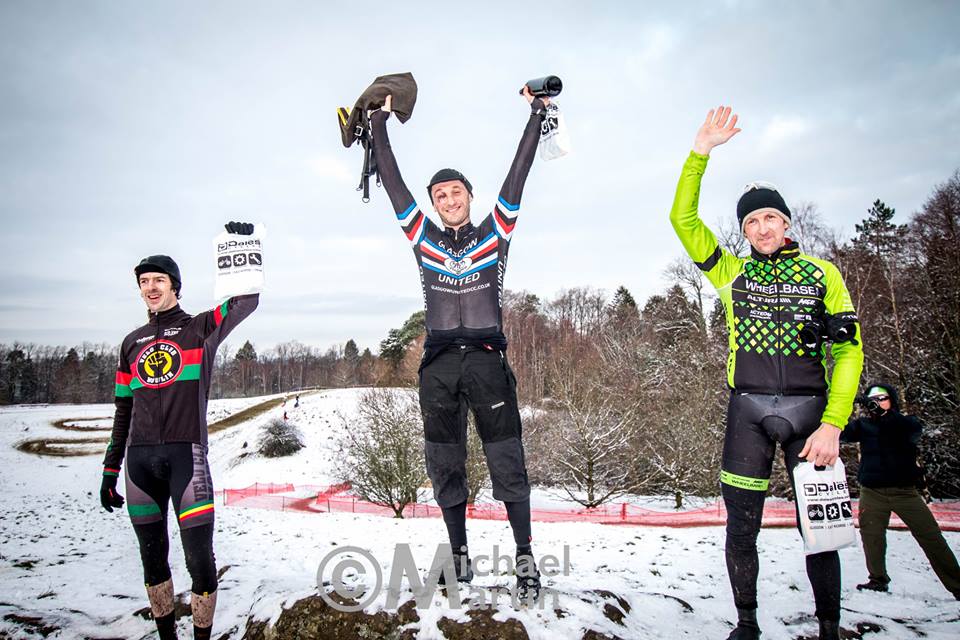 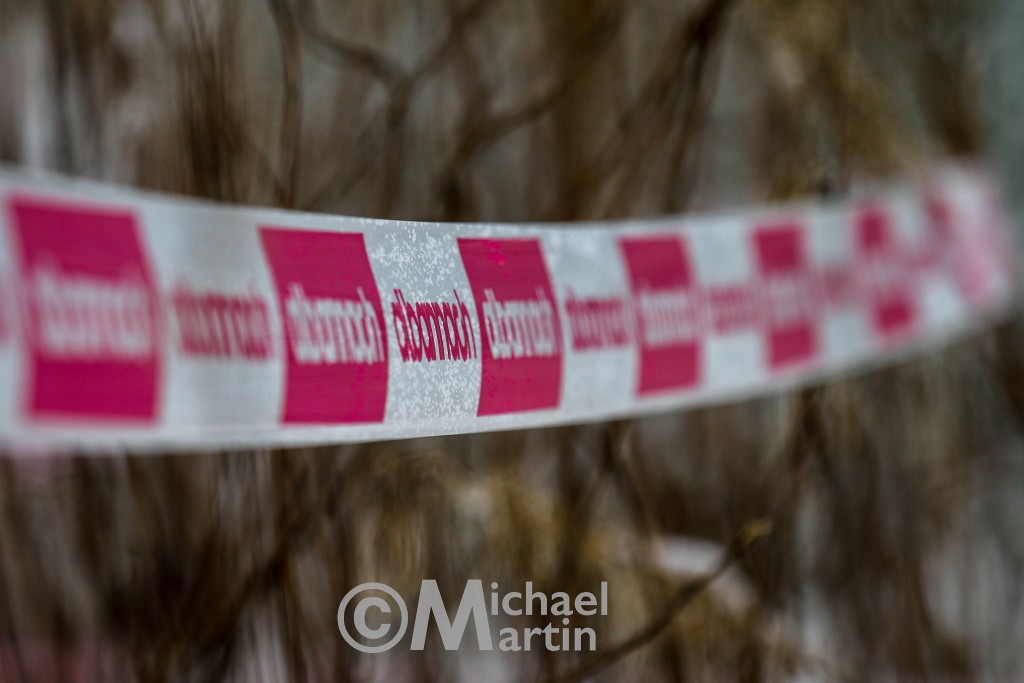 I could not have pulled this off without the amazing guys from our team SR Albannach and many others that pitched in for their local race for the love of cross. Thanks to Eachann, Leo, Chris, Colin, Marcus, Magsy, Rae, Dave, John, Graeme, Jai MC, Caz, Stephen, Iona, Liz, Jim & Jason for all their help on the Saturday before and on the day itself. 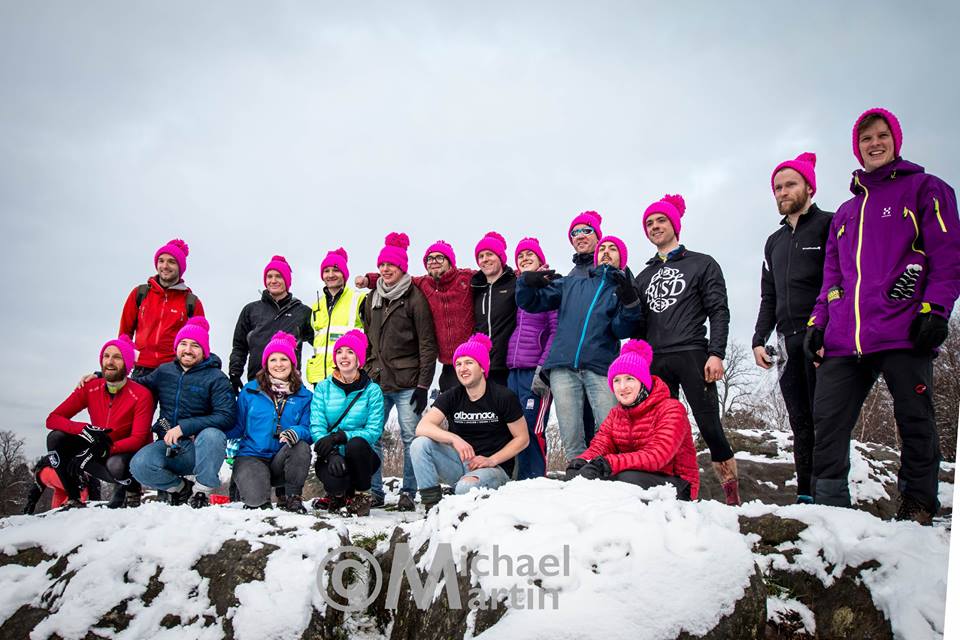 Special thanks also to Alan Anderson for his brilliant commentary on the day, Marko Young for being utterly, tremendously professional, for calming my shit the night before and delivering the timing and Debbie and pals from Dales Cycles for smashing the sign-on.

To our supporters, Trakke, Route, Edinburgh Bike Fitting and Stevie and 2Pure we’ve had so many kind messages with regards to the brilliant prizes.

Lastly a huge thanks to my wing-man Euan. He has been instrumental in both last year’s and this year’s course design. I think we have it dialled son. 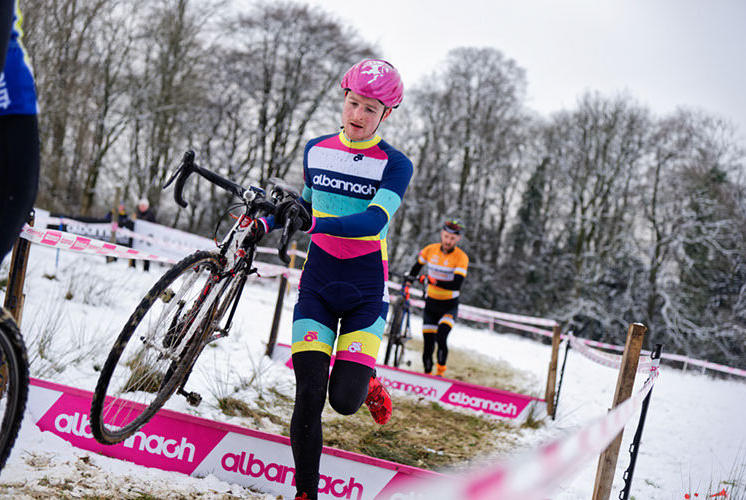