The anticipation of the Scottish National Championships is always going to be greater than any other race. A one shot chance at a lifetime of a title. The thoughts of how you would like the race to pan out far exceed the realistic chances but what if, what if, maybe the top 5 will all suffer mechanical. Maybe 5th, 6th and 7th will all get stuck in the new deep sand section. Maybe 8th, 9th and 10th place will all be taken out by a freak wind on the off-camber section. What if 11th place was taken out by a random turtle who was lost by 1000 miles and just so happened to turn up at the exact beach on the exact day of the National Champs and hid in the sand, to only launch a surprise attack at the correct moment and take out the riders in front of me. Oh, and of course this is if I have the race of my life and manage to get to 12th place in the first place. 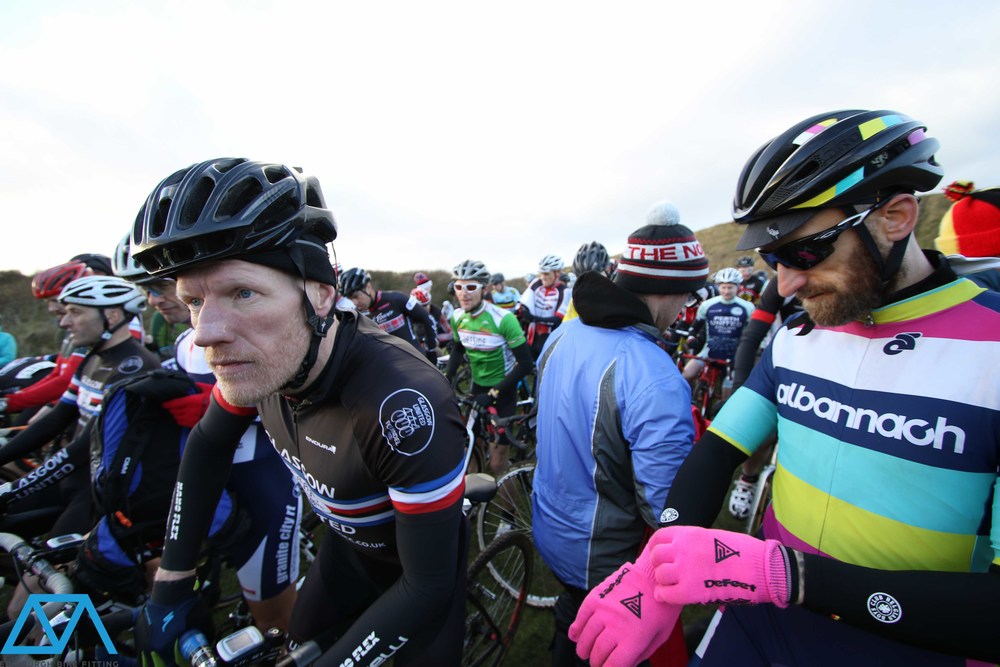 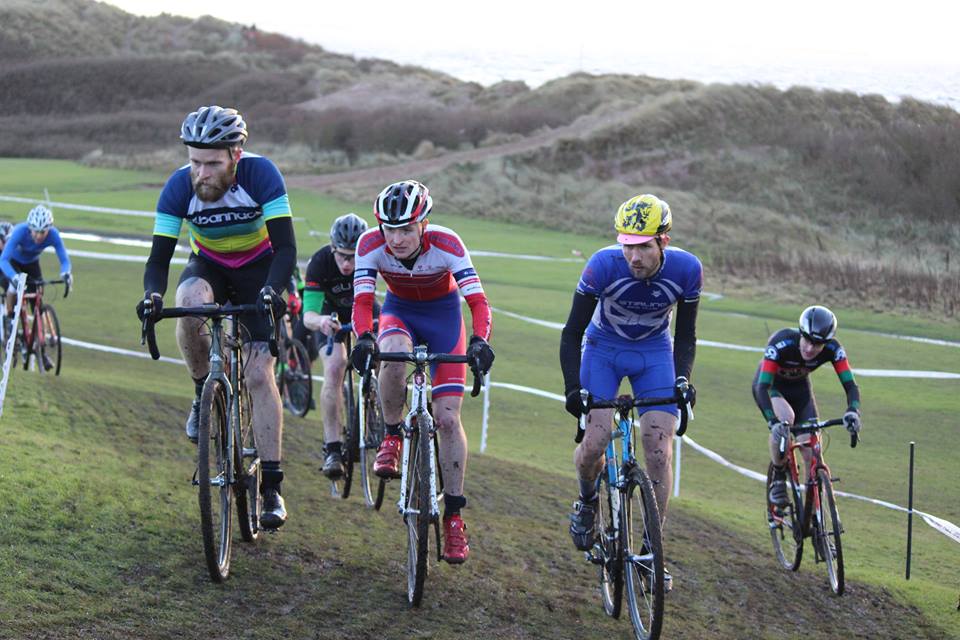 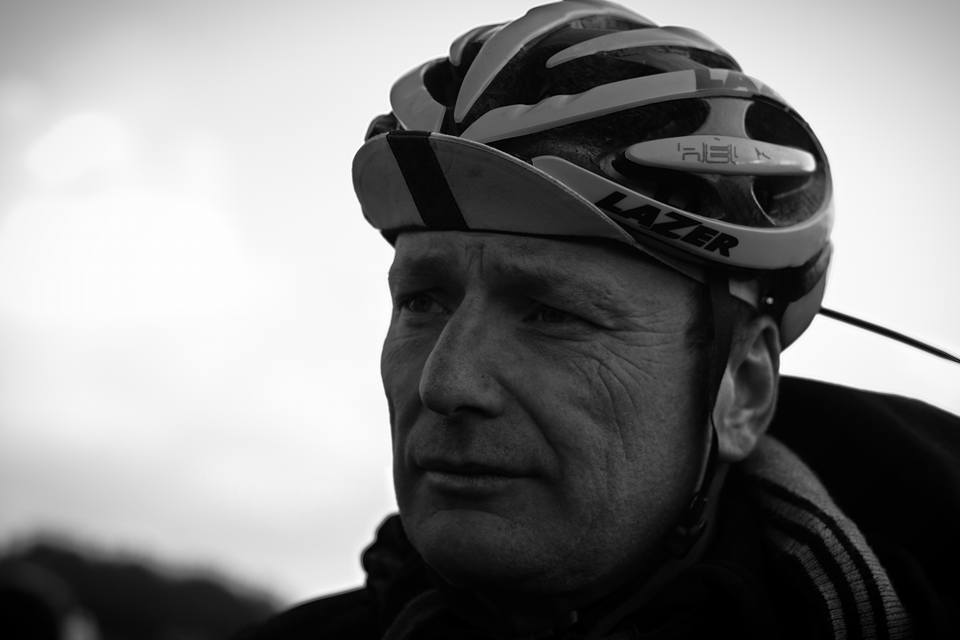 Well, race day arrived. The rain waved across the tarmac outside the window of the van as I changed into my cycling gear. The definition of warm up circled around in my head. Should I warm up in the normal way, riding my bike around and testing the course or should I keep warm by staying in the van until the last minute, drinking coffee and hoping by some miracle the race will be cancelled? I opted for the latter; the race was on. At the last minute I left the safety and warmth of the van and headed out onto the course for a warm up / scout lap. I was surprised at how well the course was holding up. Some of the off-camber sections were sketchy to say the least, but rideable with care. I thought the best approach was to remain steady, calm and collected and see how the race played out around me. I got to the line but I was aware that due to my poor performance (so far this year) I was not going to get gridded. I lined up behind the big boys, my vision obscured by a sea of colourful, lycra clad unicorns. Little did I know these bright beacons of cross love were going to become key markers in my race to come. 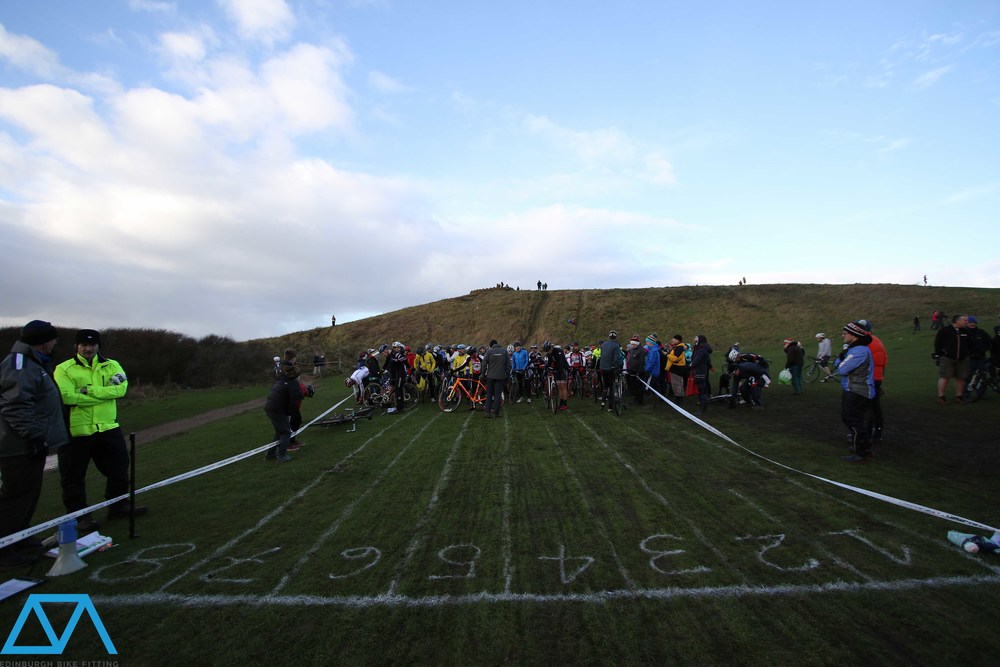 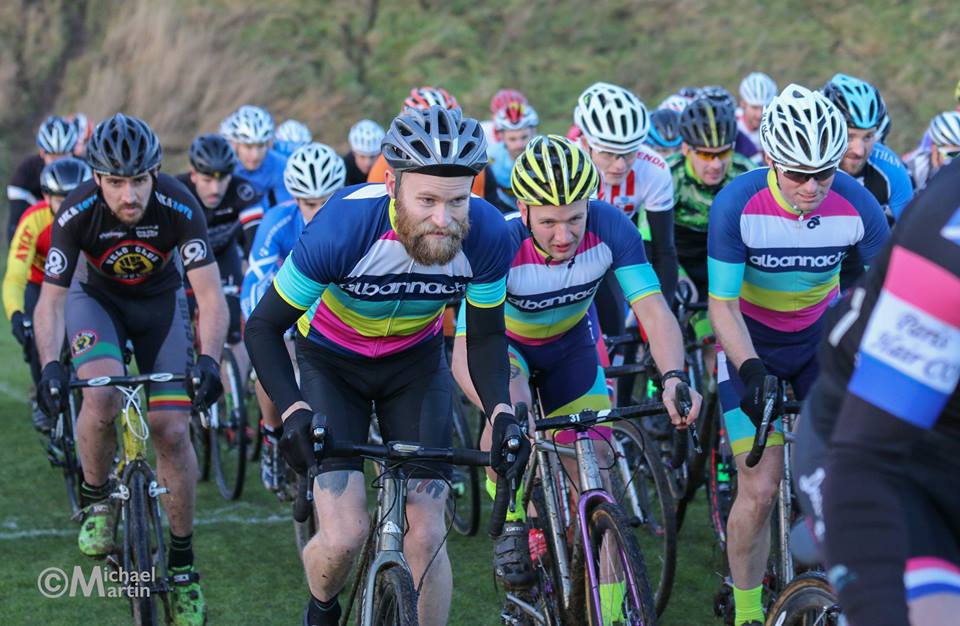 Steve and a majestic of unicorns x Mick Martin

Any time in the next 30 seconds… We all know this is going to be less than ten. We all know the time for nerves, race-prep, warm up and mental preparation is over. The en-masse click and clunk of gears, the heavy breathing, the shouts from being cut up all collide into a wall of noise to over power the short lived sound of the starting gun. 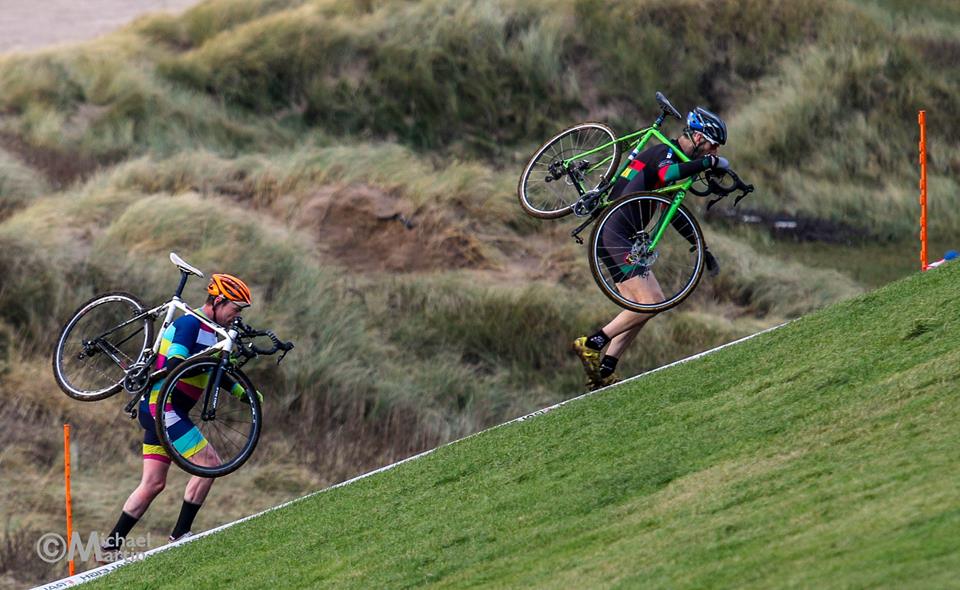 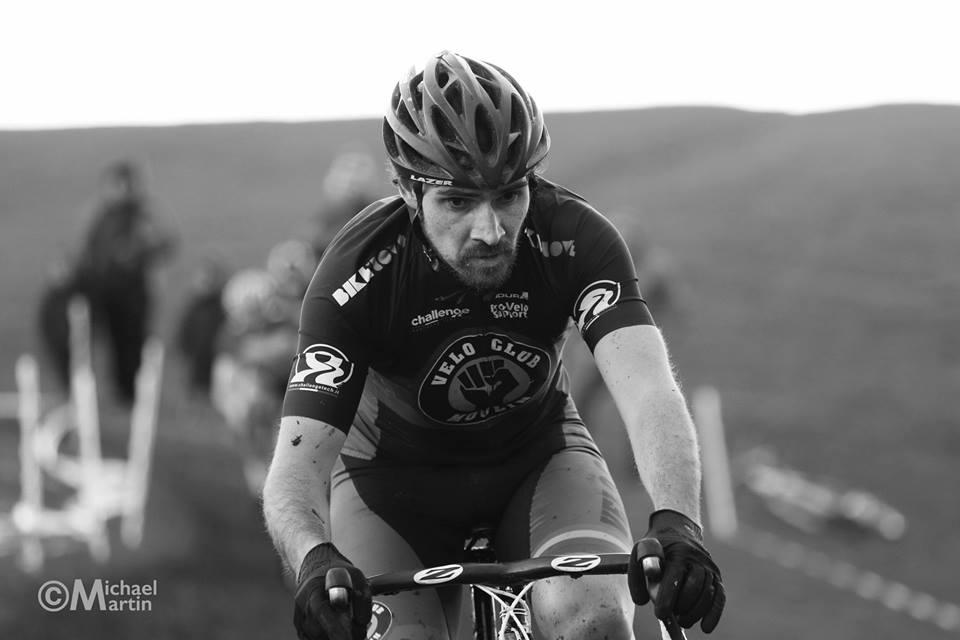 I look up to see a patch of grass, a line, an opportunity, a chance open up in front of me. I accelerate into it to move up from the masses to the few. I am in the clear open air, only about six or seven riders ahead of me. I reminded myself to keep calm and steady. I negotiated a few corners, expecting the flood of faster riders to squeeze past me, but no. I am in the open, in the clear. Keep focused, keep steady, get a few laps under your belt before you decide if you can push harder of if you are going to collapse in a heap at the side of the course. 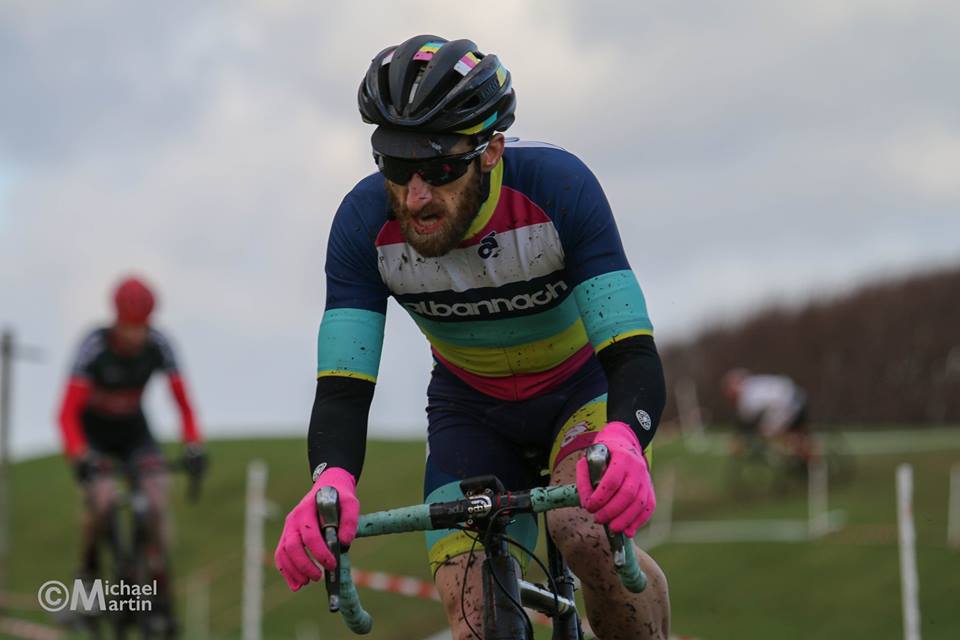 One lap down; I am OK. One other rider (Ruari Yeoman – Spokes RT (thanks my laps)) with me but we are swapping places, but I feel alright, good in fact. Just keep it steady. Three laps in… Ah, the rain. It’ll be fine it’s just a bit of rain. Nope, that’s hail. It’s that strange moment you get in a few races where, for a fleeting moment, you are conscious of the world around you, or the lack of it. All the spectators were heading for cover. Suddenly the cheers become slightly less enthusiastic, the enormous camera lenses are pointed to the ground and the marshal’s claps of encouragement become muffled through thick gloves. Maybe the top guys will get cold and pull out? Where is my camouflaged turtle? 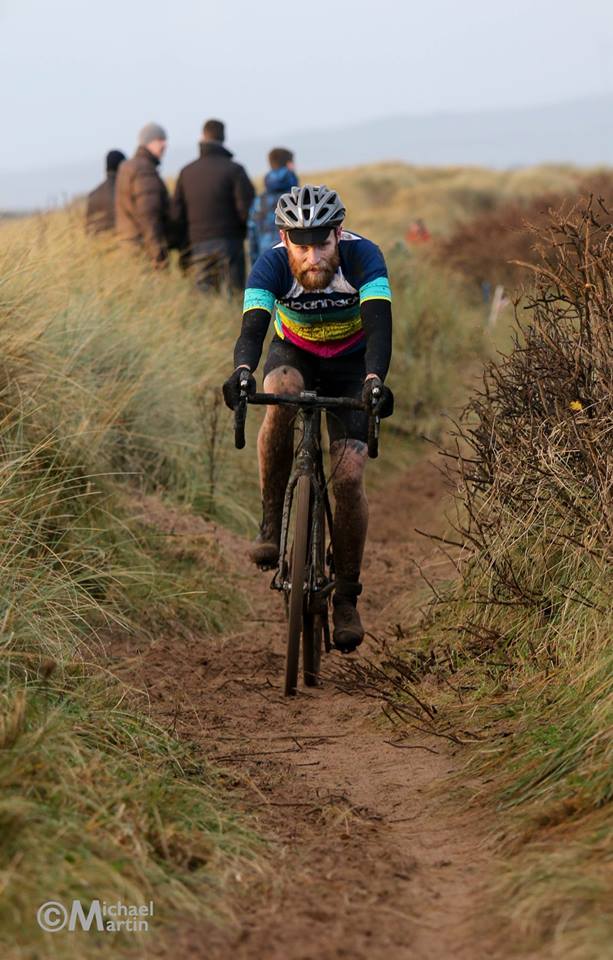 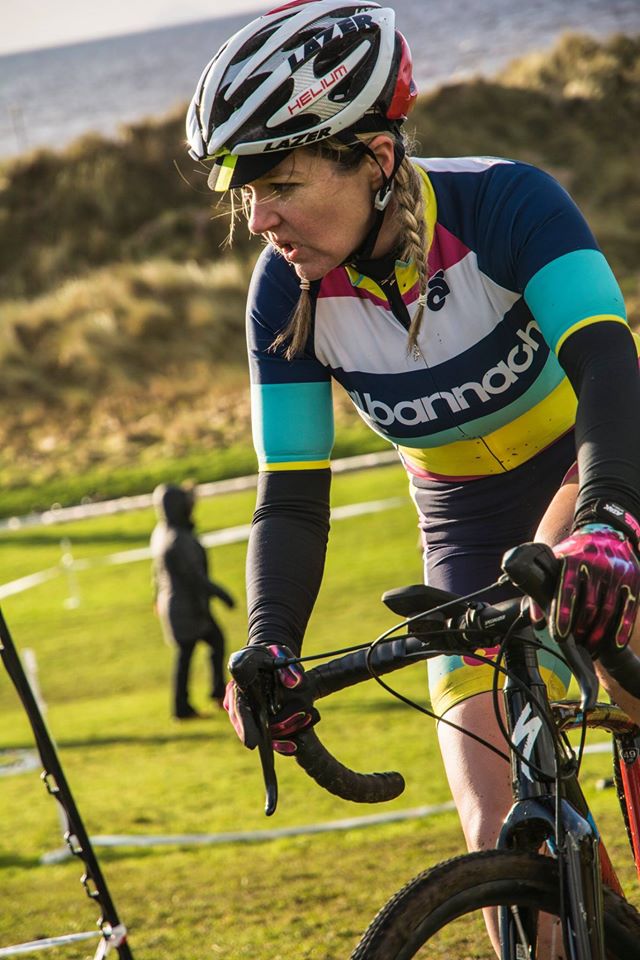 From the big zig and big zag climb up on to the big dipper then on to the first of many off-camber sections – which hadn’t been an issue, until now. As I entered with confidence I felt the front wheel twitch, then the back then the front. I desperately looked for a buoyance aid of green grass in the sea of brown mud. Be it skill, or be it luck I drifted (tripoded) my way out and on to the next section. Another muddy section with a sharp down hill corner. Take it easy, get back on the course and get on to the power to bring up the speed. Hang on a minute, that’s not right, I’ve got it… Oh, no I haven’t. The sky was still quite blue as the black hail cloud drifted past. Unfortunately, I shouldn’t have been looking at the sky. Take your time, slowly get it back to together and get up. With a quick check of the bike I run on to the next section, remount and… my chain is off. Take your time, get the chain back on and carry on. At this point the group behind me caught me. The first of the group being one of the colourful unicorns, John MacKenzie. These riders are riders I would expect to be ahead of me, so nothing lost, just keep it going… 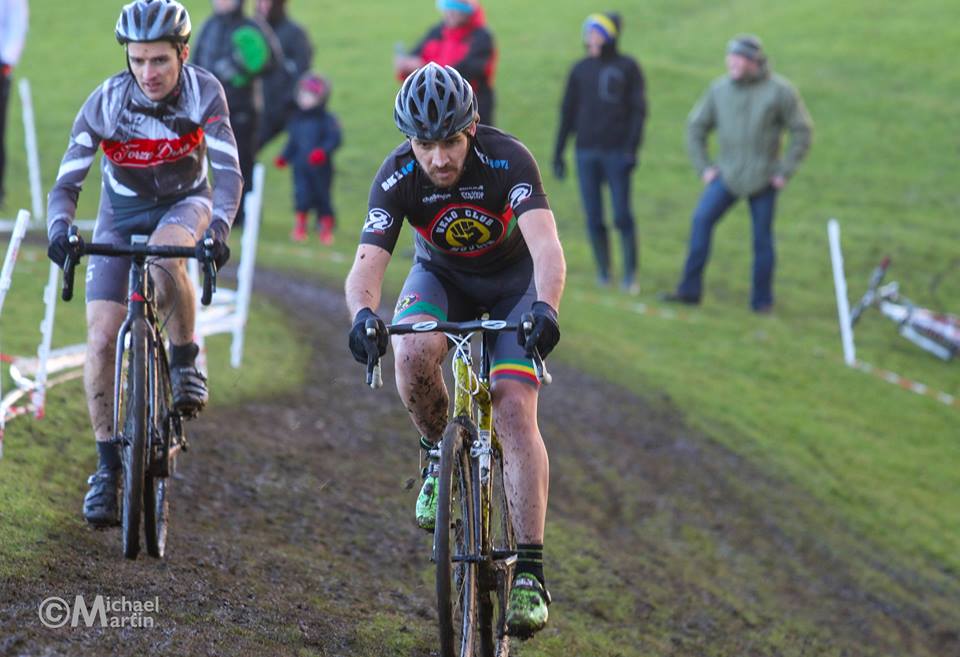 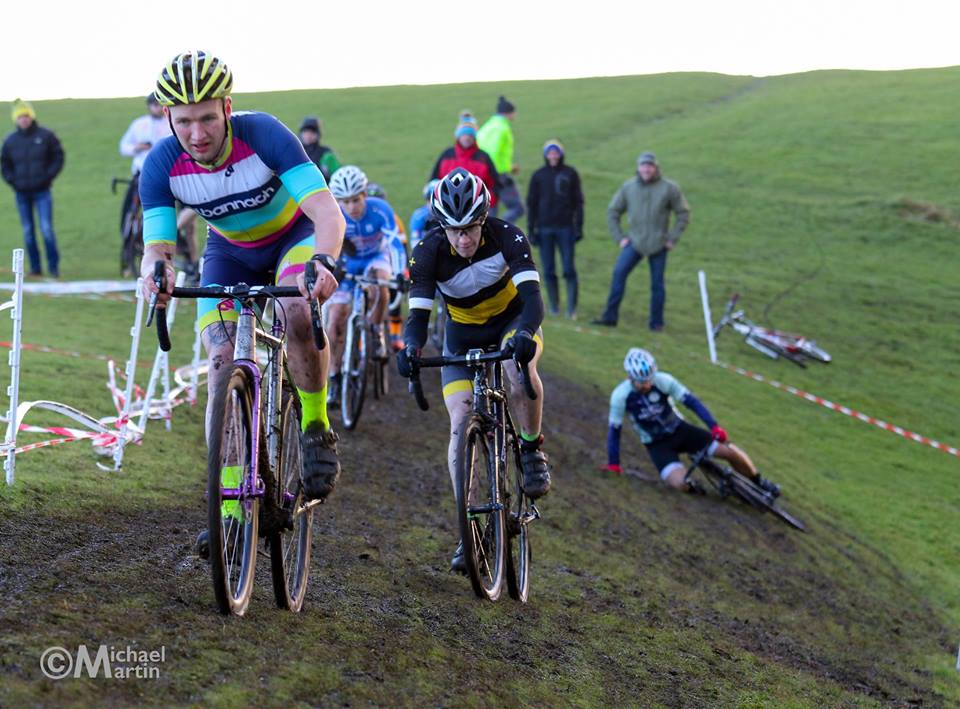 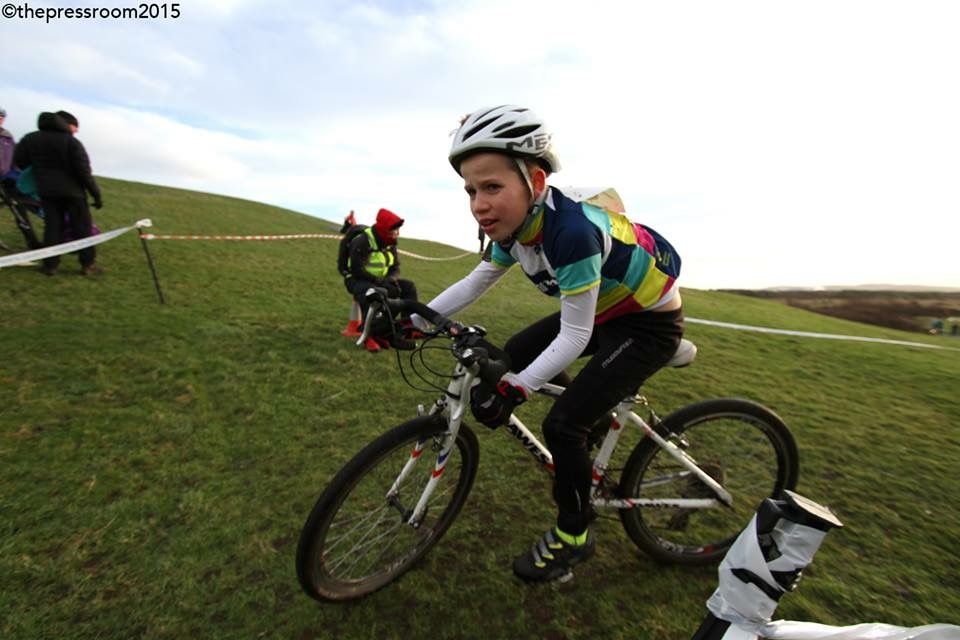 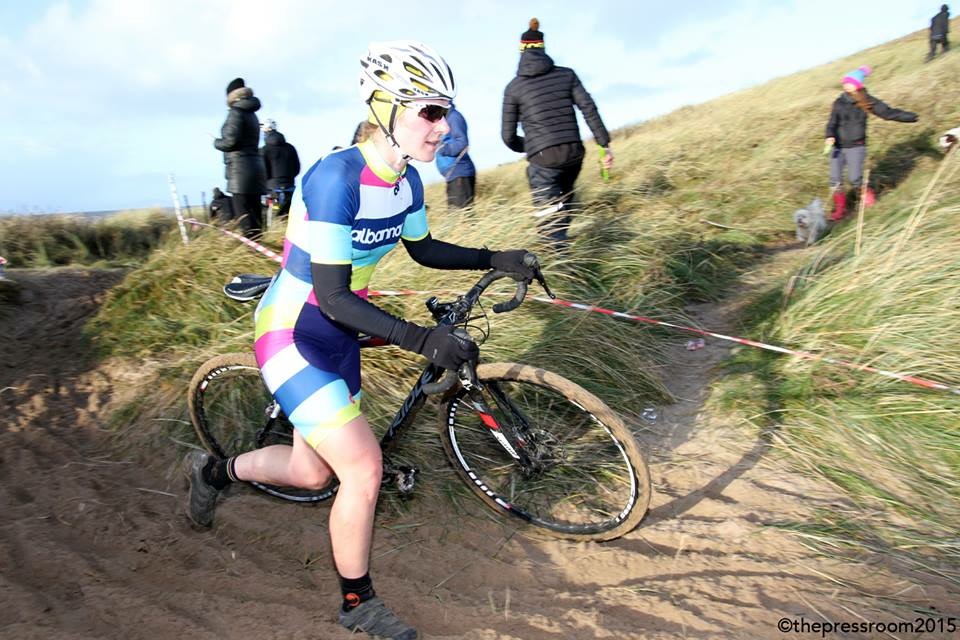 The following sections and subsequent laps followed the same pattern… slide off, get up, put chain on, loose a place or two, remount and keep going. Frustratingly, I struggled through the off-camber muddy sections but managed to cruise through the sand sections. I made up places along the sand but inevitably lost the place again through the muddy section. It appeared that the fresh wash of rain and hail had just tipped the parcour to the ‘too slippy’ side for my chosen tyres for the day. I was still upbeat but it was frustrating. 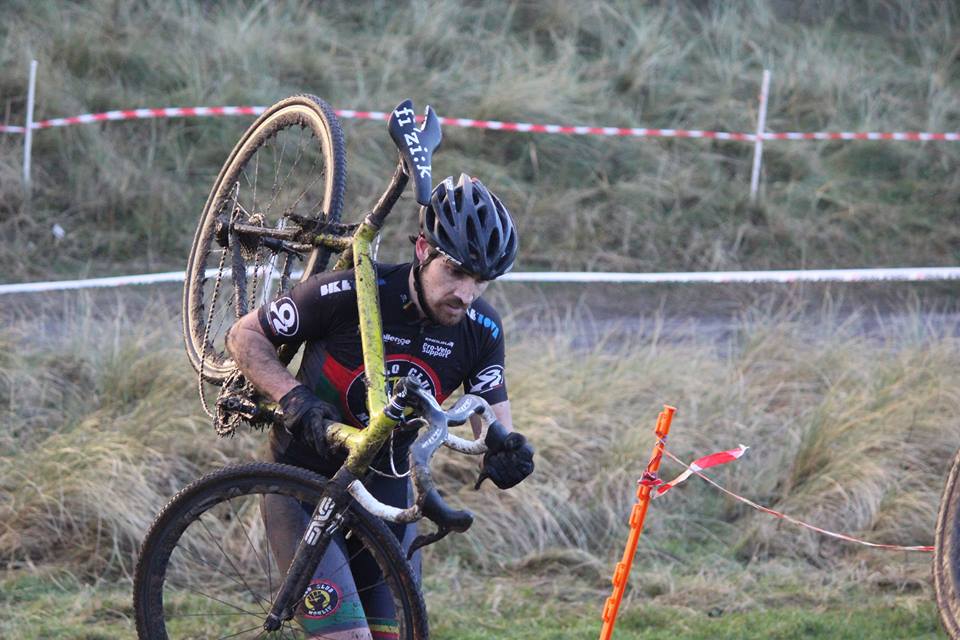 Then, as every racer has experienced, I got passed by that rider who you know. That familiar style, that recognisable kit, that distinctive bike. The place almost becomes irrelevant, this is now about honour! My target showed himself in of plain (multi) colour in front of me. A flash of the custom purple forks confirmed my fears. Albannach’s one and only Jim Cameron.

Now at this point I think its worth rewinding one year – to the Irvine beach, where once again, on reflection, a very similar race unfolded. Although this time the man in my sights was David Hamill. This needs no explanation – Everything is explained in this photo: 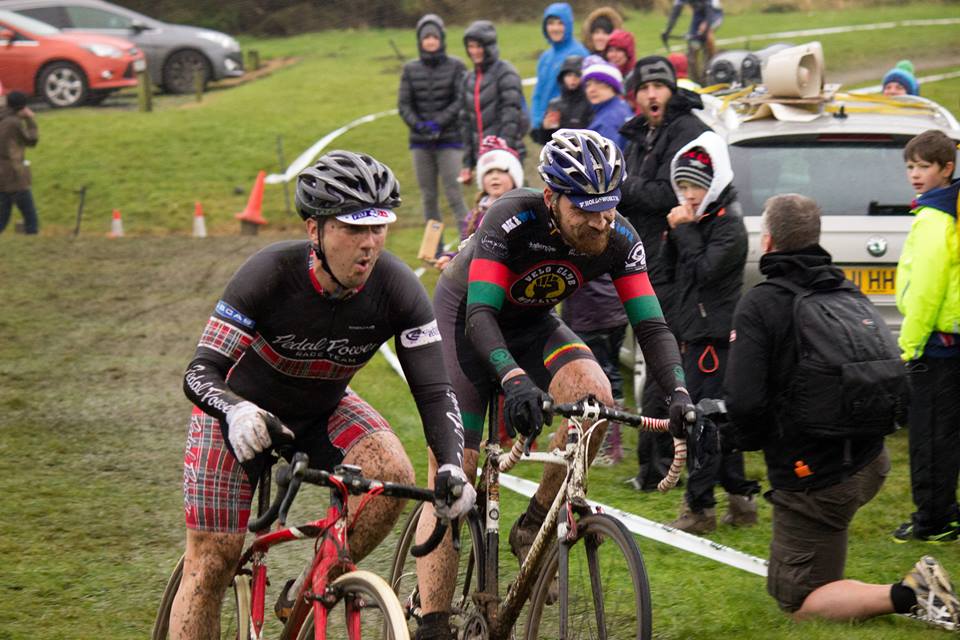 This inspirational moment earned me the award of the VCM Carpe of Shame 2014. This award has a great history in the club and for the first time it was awarded outside the Muir family. Maybe an honour I could have possibly done without in the first year of me riding for the club. Thanks guys!

Anyway, back to 2015… as I put my chain on for the umpteenth time in the race, Jim sailed past. It was the last lap, I knew it was a wheel I need to hold on to. I chased Jim down and pushed to make sure I entered into the muddy section before him to try and limit the damage of my inevitable off. Jim quickly passed me and pulled away opening a gap. I was almost jealous of the grip he had. Continuing to fight to limit my losses I kept the gap to a minimum. Entering the climb the gap was only a few meters and I knew I could gain that back up in the sand, just stay in the wheel. 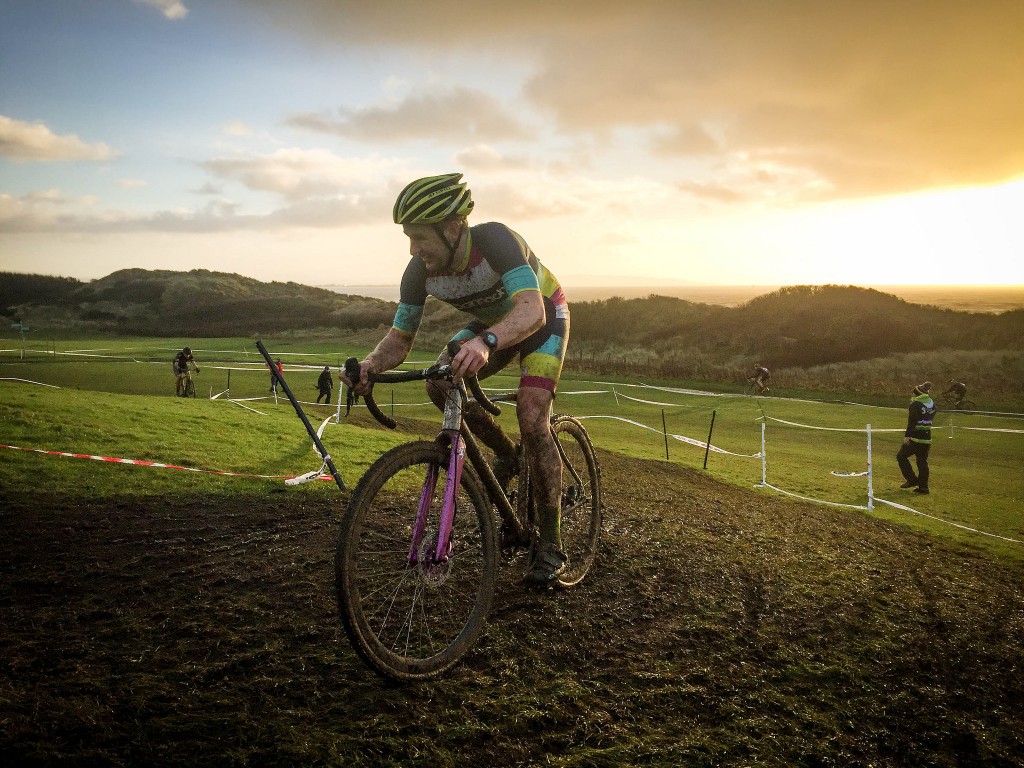 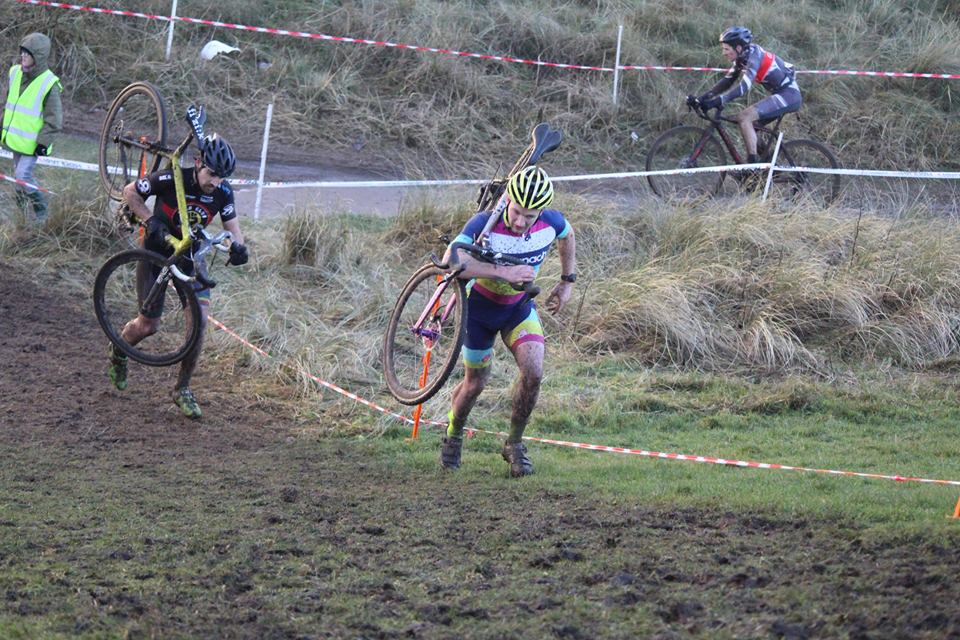 Little did I know the fate of my race had almost been sealed. I focused on my run up and re-mount. I kept the gap equal, executed a straightforward remount only to discover my chain was off again. Standing at the top of a windy hill, exposed to the elements rolling in from the Atlantic, I watch Jim ride off into the distance. Keeping focused and taking my time I fitted my chain and rode on. The gap to Jim now seemed insurmountable. As I hit the sand I pushed a bit of extra effort. It was make or break time. 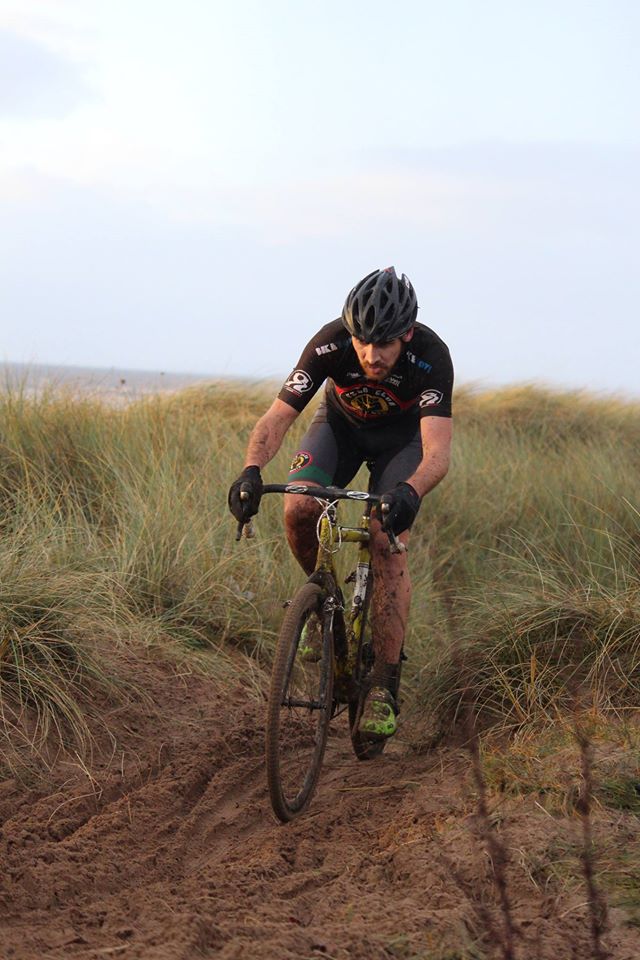 But hold on, the Albannach camouflaged tartan started to appear out of the dunes. I was carrying speed but was it enough. Would my chain stay put? The gap rapidly decreased, I risked the deeper sand to make the pass knowing that I’d have to risk the deep sand to get back on the line. I kept pushing ever mindful of last years result and more that photo… I need to make a gap on Jim. The last few corners ran smoothly but I had to maintain speed through the last muddy section on to the finish line. Pushing on I got bogged down on the last corner… had I done enough? Struggling on, I scrapped my bike and body across the line. I instantly looked back to see Jim cross the line just behind me. Close. Almost too close. Again.

Where did my turtle go? Long live the turtle. 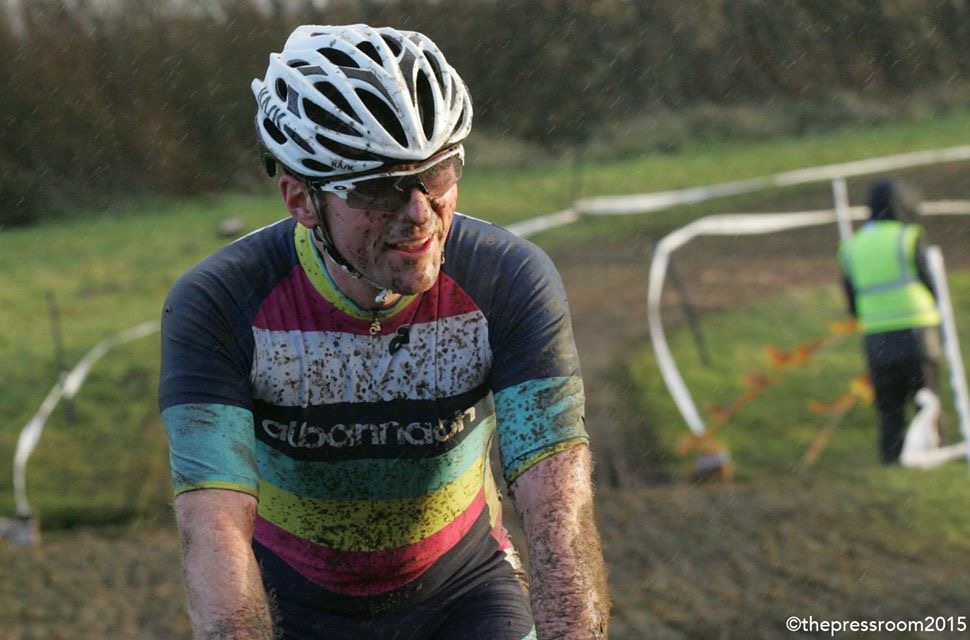 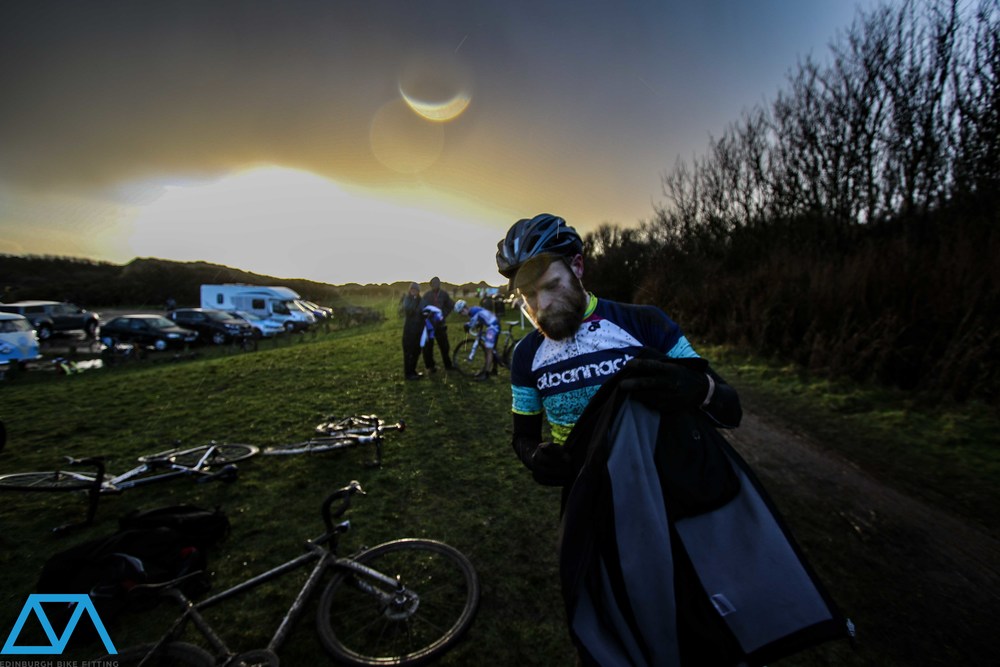 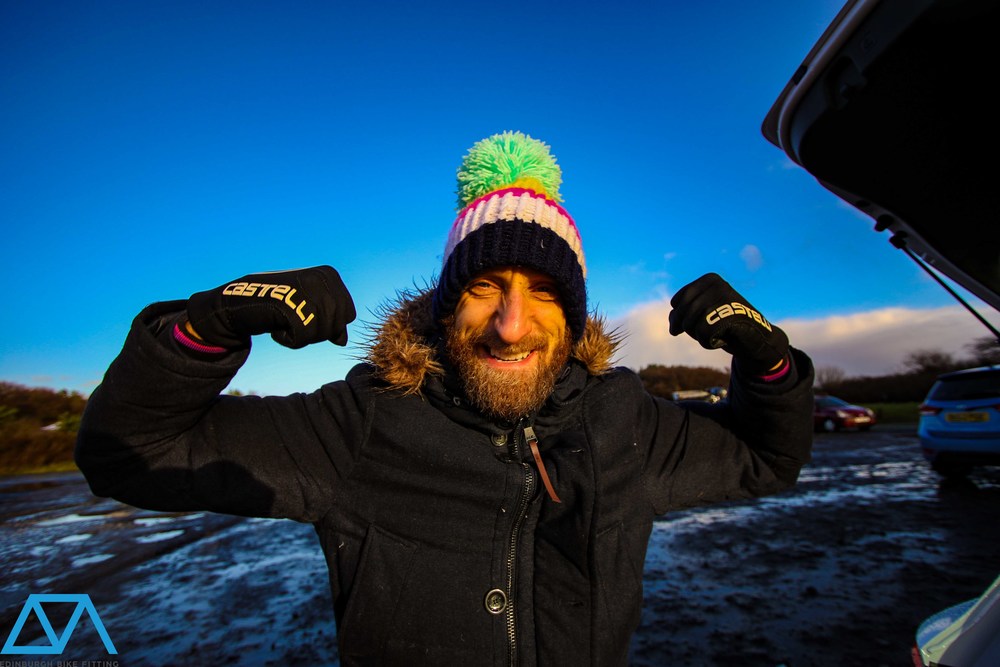 Thanks to Mr Turbitt for his recount of Sunday’s Senior’s race. I was all alone after lap 1 so it was great to get a wee battle on the last couple of laps. The only time I fumbled in the primo sand pit was on the last lap when he was chasing behind me down…that’s racing. Looking forward to SCX6 this weekend, hopefully for more tête-à-tête!

Congratulations to our new Scottish Cyclocross Champions! For full results of SCX5 & SCX Championships check them out here 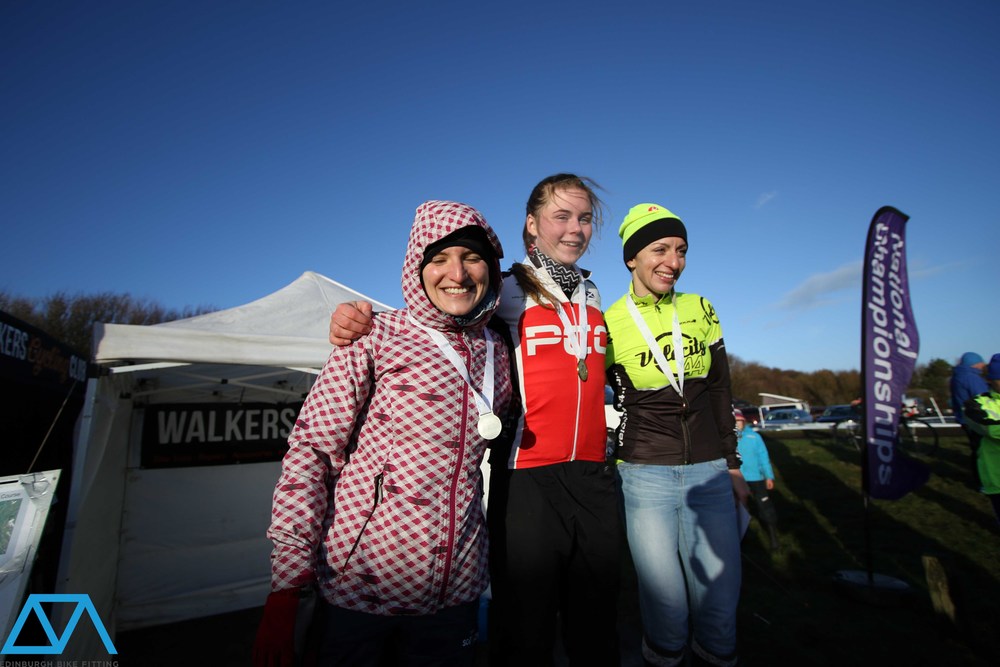 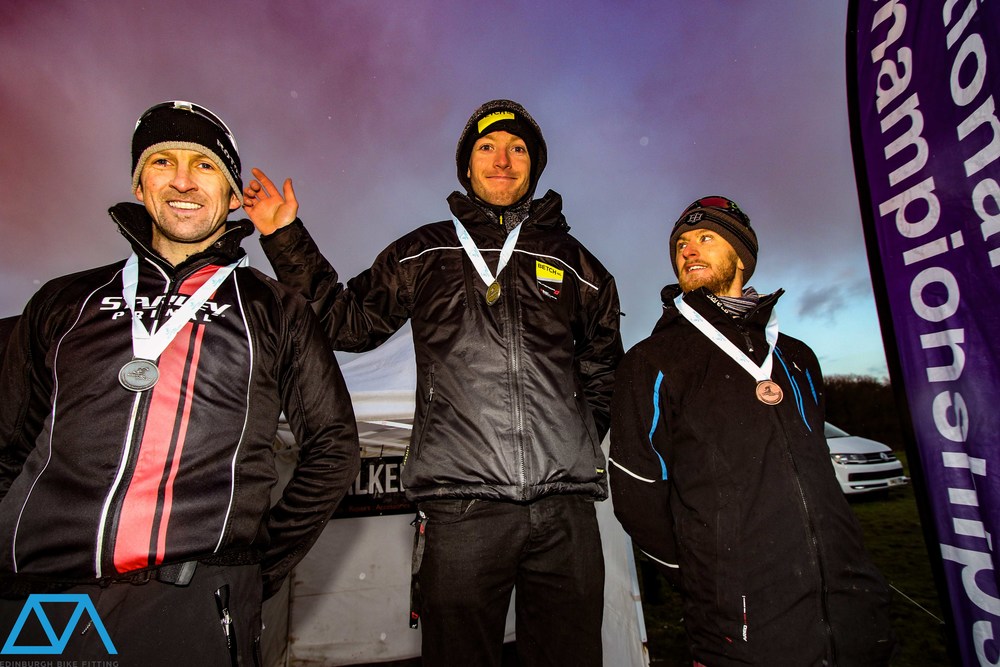 Nice report, sums it up perfectly! 🙂