SCX4 – Madness in the Meedies

Being a Fifer, the opportunity to return to the beautiful Kingdom was something I was highly looking forward to in the run up to the SCX4 – Meedies Madness at Lochore. True to my form of late, my preparation was last minute and I managed to get my entry in just 10 minutes before the midnight cut off on Thursday. 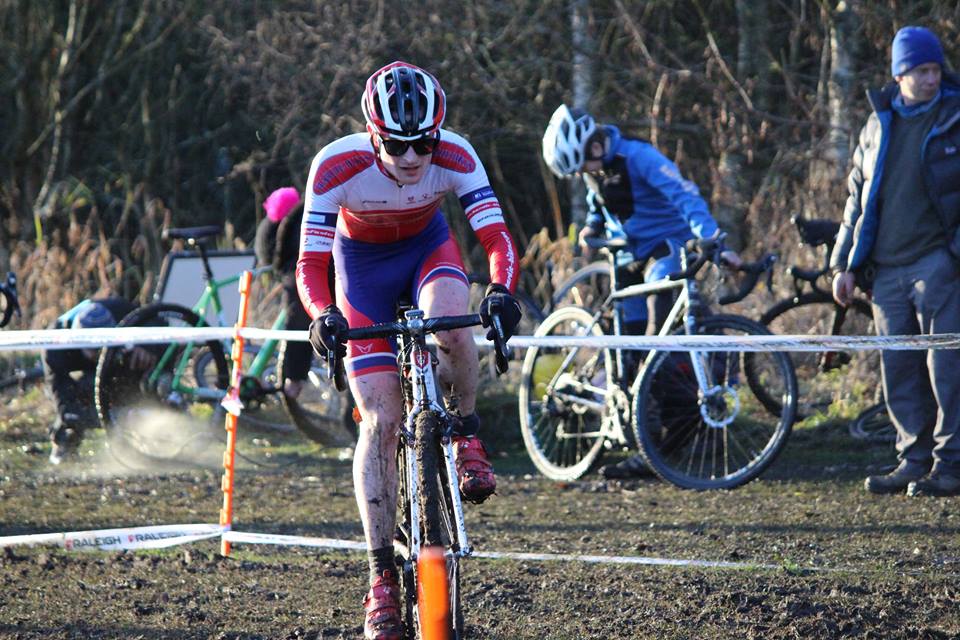 Preparation wasn’t ideal for the race but it rarely ever is. A Massive lash up on Friday night until 4am had me well set for the Alloa XC running race on Saturday with a stonking hangover; not the best prep a 9km lung bursting, head pounding run round a dirty field in Clackmannanshire. Fortunatley Saturday nights pre-race routine was an earlier finish having been out again, getting to bed at the early time of 0100. Sunday morning rolled around and I have to admit I wasn’t feeling brilliant. 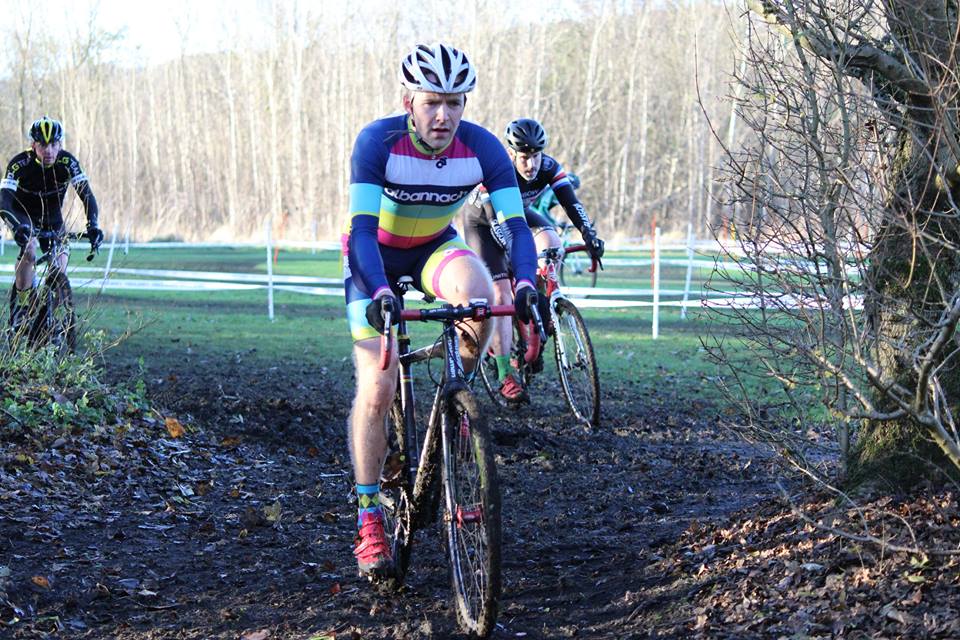 In keeping with the Meedies Madness weather of the past two years when I’ve raced at Lochore, the sun was shining and it was a beautiful day, as has become the norm for this race. As soon as I arrived I was desperate to check out what the spiral of doom from the last two years was looking like. My PTSD from the quagmire of 2014 was well on its way to recovery and I was concerned it’d all come flooding back on seeing the mud pit that I expected to await us. My fears seemed to being realised as I saw rider after rider leaving the course with broken rear mechs now trailing on the ground. Yet, as I approach the finish arena I could see a course I didn’t recognise, and much to my relief the route had been changed with the apparent removal of the death spiral and the ongoing V50/W/J race was making reasonable speed around the main arena. 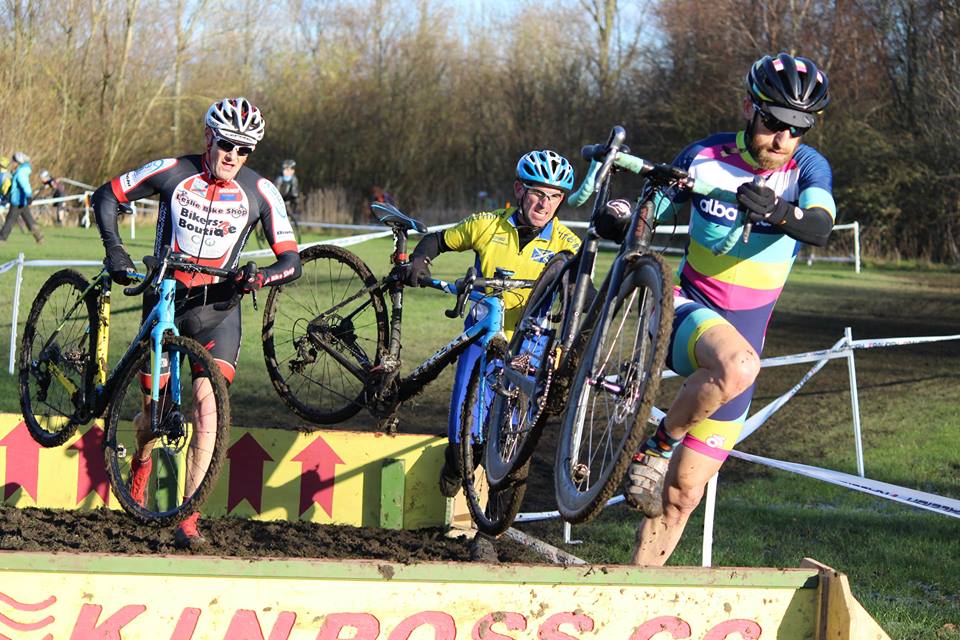 With this weight off my shoulders I set of to register and get warmed up. It’s a this point I felt the sudden weight of guilt land on my shoulders. Another fortnight had passed, another 2 weeks of potential training time had been wasted, and I found myself about to start another race, hugely underprepared and cursing work, the dark nights, and ultimately my bone-idleness. In a desperate attempt to fit in some training benefit I set off on my rollers, narrowly missing falling off them in the car park, and basked in the winter sun for half an hour, with Meatloaf’s back catalogue blaring from the car. 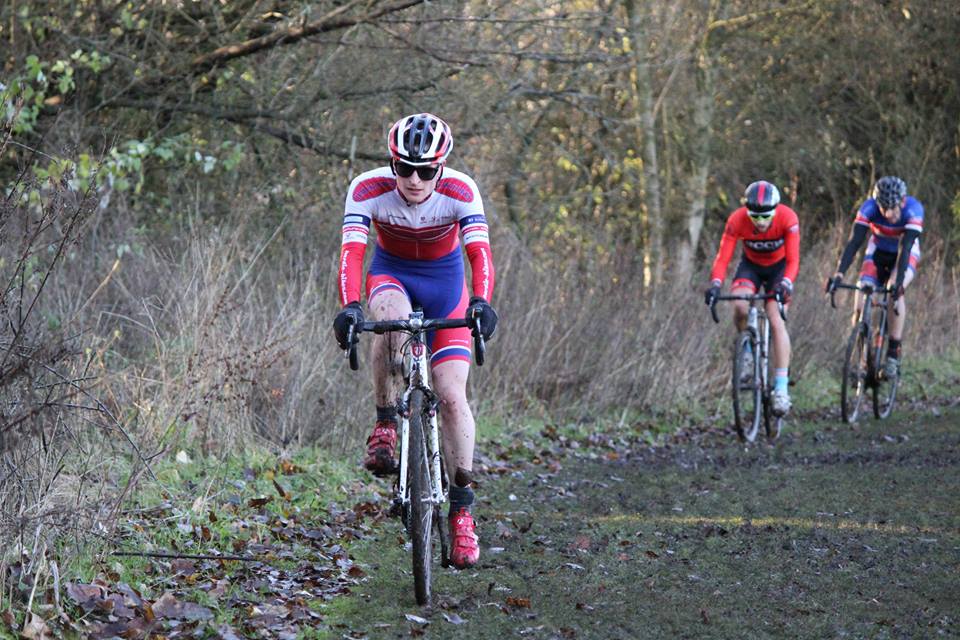 Fully warmed up and starting to feel like I’d maybe overdone it, I was delighted to see the familiar faces of Jim and Chris Barr for some chat and a course recce to take my mind of the poor prep guilt I was suffering from. The first part of the course out of the main arena was the same as last year with some muddy trail sections leading down to the hairpin by the castle ruin. As the course approached the large start paddock at the back of the course it was clear the spiral of doom had been moved, not removed. Forunately the ground was holding up well and despite being a bit splodgy, the going under wheel was relatively good. The back exit from the start arena held true to the past few years with the first set of hurdles and few tight turns before the reentry into the main arena. The cut up ground at this entry was testament to the good course planning by the organisers who’d sensibly decided that a spiral of death on the sodden ground might not make for the best racing. 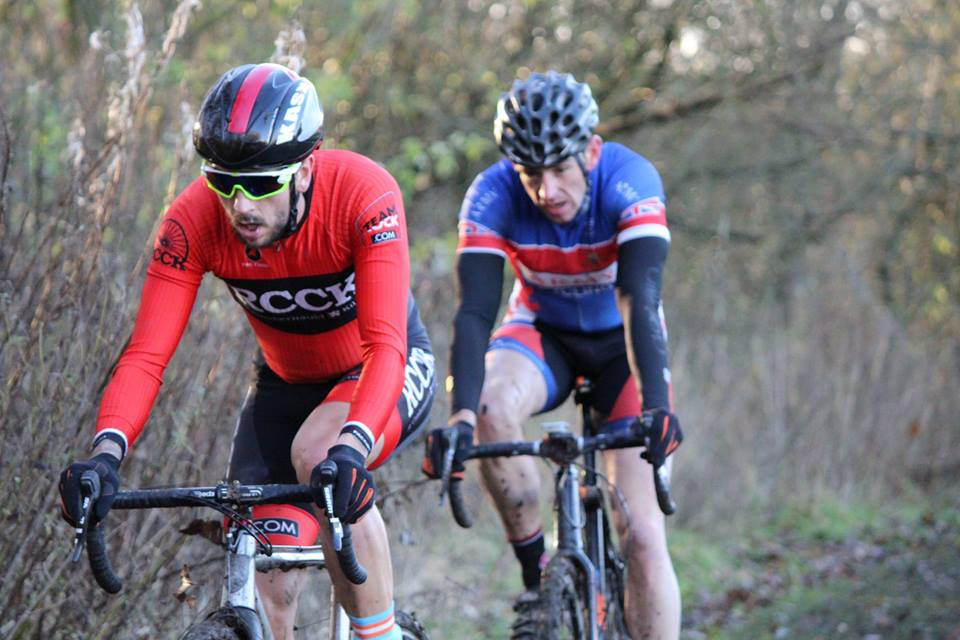 The overall numbers on the start line seemed lower than the previous races this season and there were fewer #unicrois riders present – apparently Magsy was on a spa weekend, but we can forgive him as the mudwrap he was getting was likely good conditioning for the remainder of the Cx season. The race started as predictably as ever with complete carnage on the first corner. Once I’d settled in to the first lap I could see the now familiar view of Jim Cameron’s rear end staring at me. I’m a proud heterosexual male, but despite this, I was hoping to keep Jim’s bum in view for as long as I could. 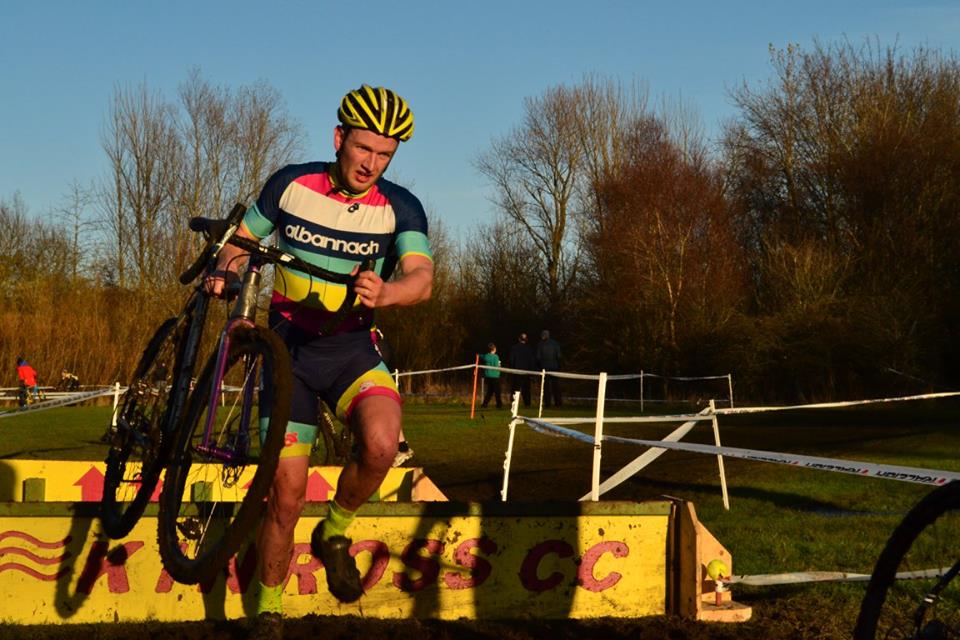 Lap 2 threw down some real excitement as I was undercut on the insid by some overenthusiastic rider on the corner leaving the start arena, only to see him hit a solid fencepost at full pelt and perform an impressive, unintended dismount. I recall Simon Burney telling me a Dirt School Cross Clinic in 2012 to ride within yourself – whoever this guy was, he needed to take that advice.

Three laps in JMC was on course handing out just the encouragement I needed: “give Jimbo a kicking, son!” so I cranked the pedals to try catch him. By the time we’d come back around to JMC, Jim was nowhere to be seen, and I was fearing I was going to be reported to the commisaires for taking his encouragement too literally! It later transpired that Jim had suffered a puncture on lap 3 and had to retire from the race and my innocence was maintained. 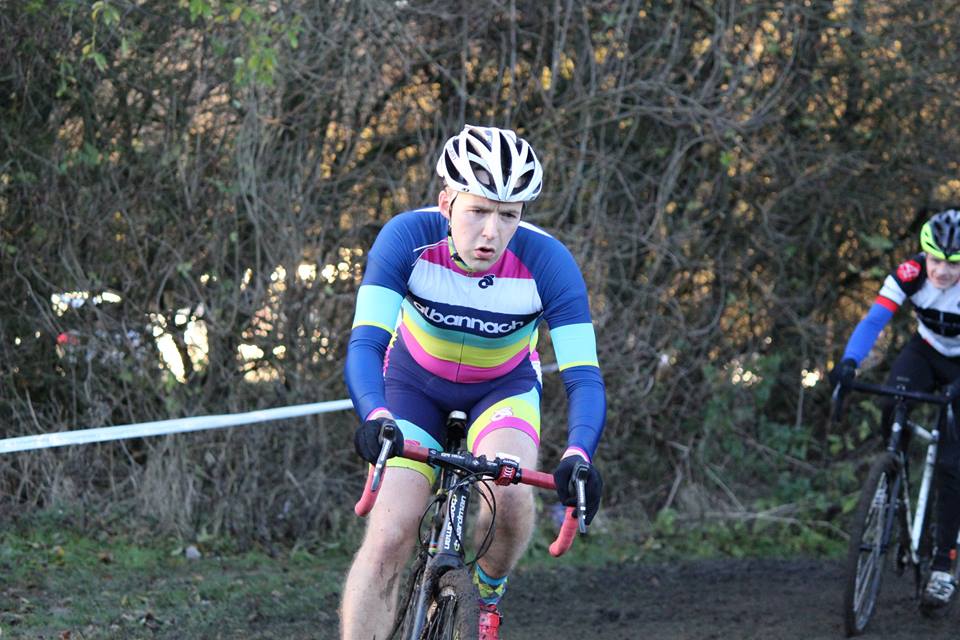 As the race played out, my initial excitement had worn out and the fatigue of the course was taking its toll. By the penultimate lap I was struggling to ride the mud alongside the pits and went for the dismount to try keep up the momentum. The hurdles seemed to be growing, I’m sure of it, and I was a pathetic mess trying to get over them. I just made it through the finish line before being lapped by the leaders for a second time, leaving me with an unwelcome final lap. 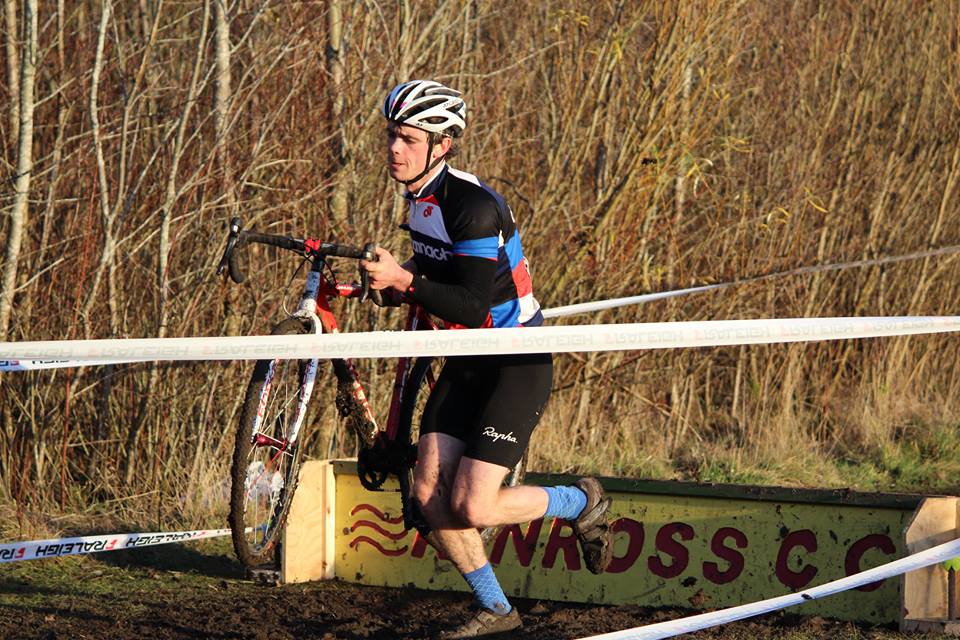 So 3 races down this season, 3 bottom half finishes and no mechanicals yet (I think its maybe hard to break a bike when it’s averaging 8 miles an hour). My ventures into cross the past two seasons have seen a definite progression as the season has gone on. That’s not happened yet this season but I’m hoping for the leaps and bounds to come in the later half. Mull is next on the cards so with 3 weeks to go I’m hoping Santa can deliver some fitness to me as an early Christmas present.

Big thanks, as ever, to the race organisers who did an excellent job and who are left to tidy up as we all depart home while its still light and relatively warm.

Cheers to Tam for his report, ya hoor sir. Thanks alsot to Nicola & Paula for a loan of the photies.

Results from SCX4 at Lochore

This Sunday 06.12.15 we turn to SCX5 at Irvine which also doubles up as the Scottish CX Champs. The event entries have closed now but you should still come along to Scotland’s étape reine. 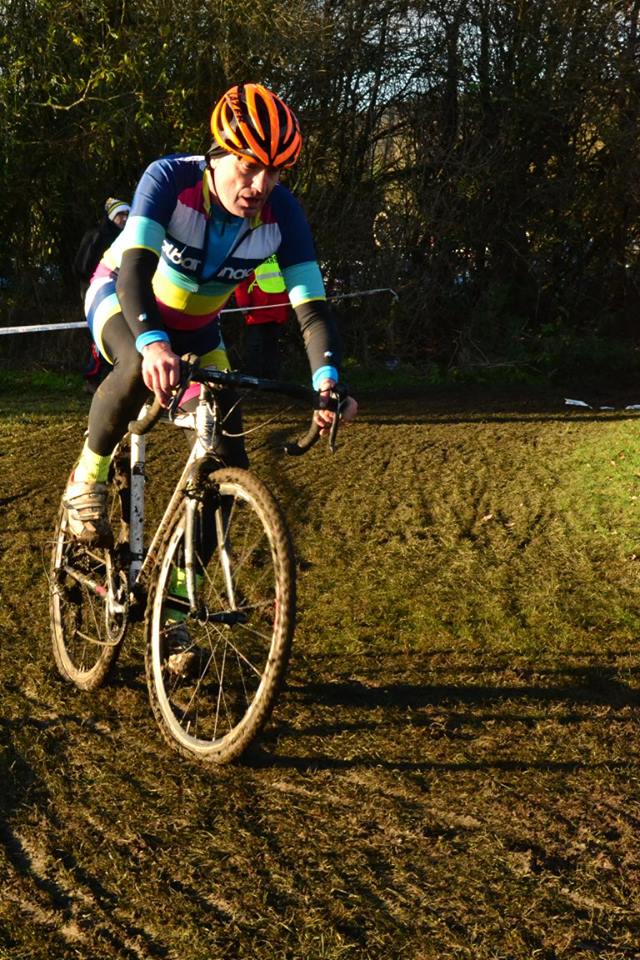