SCX1 – My first encounter with ‘cross

Almost two years ago, I was persuaded to take part in Nether Mind the PolloX, a women’s only ‘cross training day with a race at the end. Having no idea what to expect, I went along with my full suspension mountain bike. Needless to say, my bike choice was a little off but after an awesome day of sludging through the muddy Pollok trails, I decided that I wanted to try ‘cross properly.

It was only a few weeks ago that I actually got round to getting myself a ‘cross bike. A decision mildly influenced by my ‘cross-obsessed boyfriend. And last week, at Callender Park, I did my first ‘cross race.

A full day training course (the day before) with Rab at Dirt School soon saw me on my way to being able to mount and dismount in only a mild panic, climb up short steep hills, descend without fear and breeze round cones like no-ones business. So off I went to Callender Park, in my newly acquired SRACX kit, feeling excited and only mildly terrified.

Shortly before our race, there was a chance to do a practice lap. I remember Rab warning me that people tend to race round this, so I opted for a leisurely tootle. I was quite nervous about how fast the race would be before the practice lap, and in all honesty, this exploratory ‘practice’ made it worse! The climbs seemed to be much steeper than the ones I had been practicing the day before, the turns much tighter, but folk were zooming around, no bother! 90% terrified, 10% intrigued.

The first obstacle to overcome was working out where I had to be at the start line and slotting my bike into the group that had already formed. After a bit of apologetic shoogling, I managed to wriggle into a space. Settling into the group, I was struck by how friendly all the other riders were. I very quickly informed them “this is my first race and I have no idea what I am doing!”, but they were very patient and entertained my last minute ridiculous questions such as “What if I need to pee? How long really is 45 minutes? How do you know when it’s all over?”. 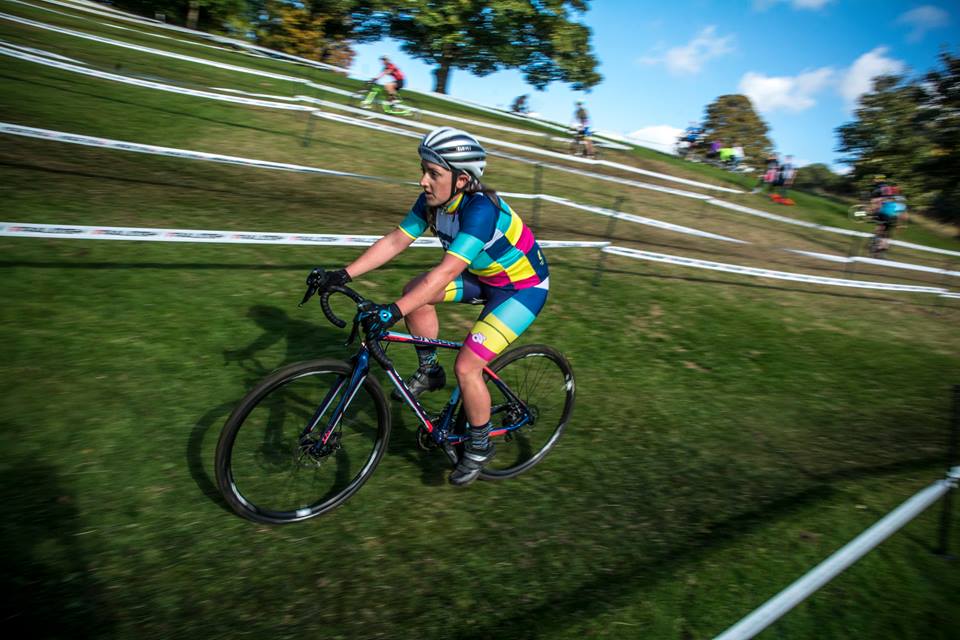 Now feeling 30% excited and only 70% terrified, I began to look forward to the impending 45 minutes of doom and felt vaguely like I might know what I was doing. I was wrong. At this point, the veteran ladies were asked to move forward. I had entered a moment of identity confusion: am I a veteran? Am I a senior? Could I pass as a youth? I was promptly informed that I was not a veteran, nor a youth. Thanks to the lady who quickly cleared that one up!

The thing I found most surprising was just how fast the first lap wa Playing the long game (i.e. being a woose) I was quickly left behind and found myself at the back. We came to the hill with the roots at the right hand side, and I was surprised to find that most riders were running it. ‘Ah ha’, I thought, ‘maybe it is too steep after all’ (but this may have been more to do with the blockage…). After a successful and only moderately painful re-mount, I decided to man-up a bit and attempt to speed things up for the remaining laps.

The turns were tight, but I definitely took them too slowly the first time around. But my favourite parts of the whole race were the descents. There weren’t many, but they were fun. Being used to irresponsibly throwing myself down things on my mountain bike, I used the descents as opportunities to get a bit of time back. 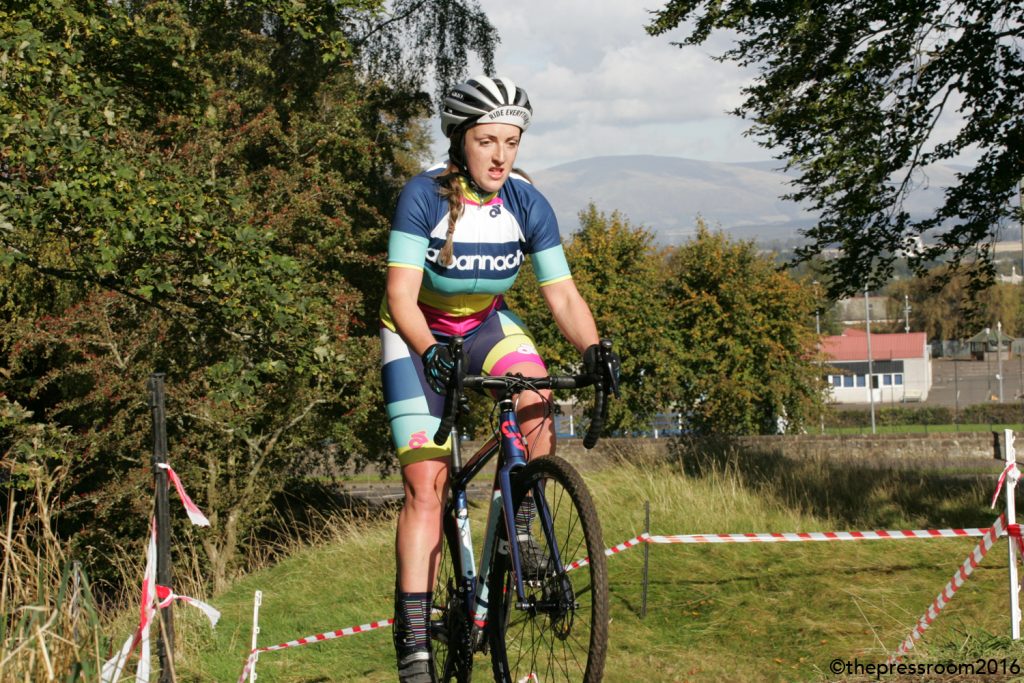 As the race continued, I felt my speed and confidence beginning to pick up. I think this was definitely helped by the shouts of encouragement from fellow riders and spectators. Coming up the hill with the scary roots for the third time and watching the majority of folk choosing to ride it, I decided to stay on my bike. Upon reaching the top and still being able to breathe, I realised that it was MUCH easier than I first thought on the practice lap. Compared to my mountain bike the Brava might have thinner tyres and non-existent suspension, but it seems to float up and over things that I didn’t think were possible. Reaching maximum stoke level, I tried to ride as fast as I could for the final two laps. At points I did feel like my heart might explode, but there were a few sections were you could take it easy, and catch your breath, for all of 10 seconds.

There’s lots of things that still confuse me about ‘cross, but perhaps the one that puzzles me the most is the over-taking rule. As I was riding round I heard lots of ‘on your left’, ‘on your right, ‘on your left, no… right’, ‘on your left, right, left, left’. I knew that these were riders who were lapping me, and to move out of the way. However, I wasn’t sure what to say if I was moving past someone. At this point I have to put my hand up and admit that I did inform someone that I was ‘on their right’ as I was moving past them, but only because they were veering towards me and I wanted to avoid smashing into them. However, I now know that this is a big ‘cross etiquette no-no. 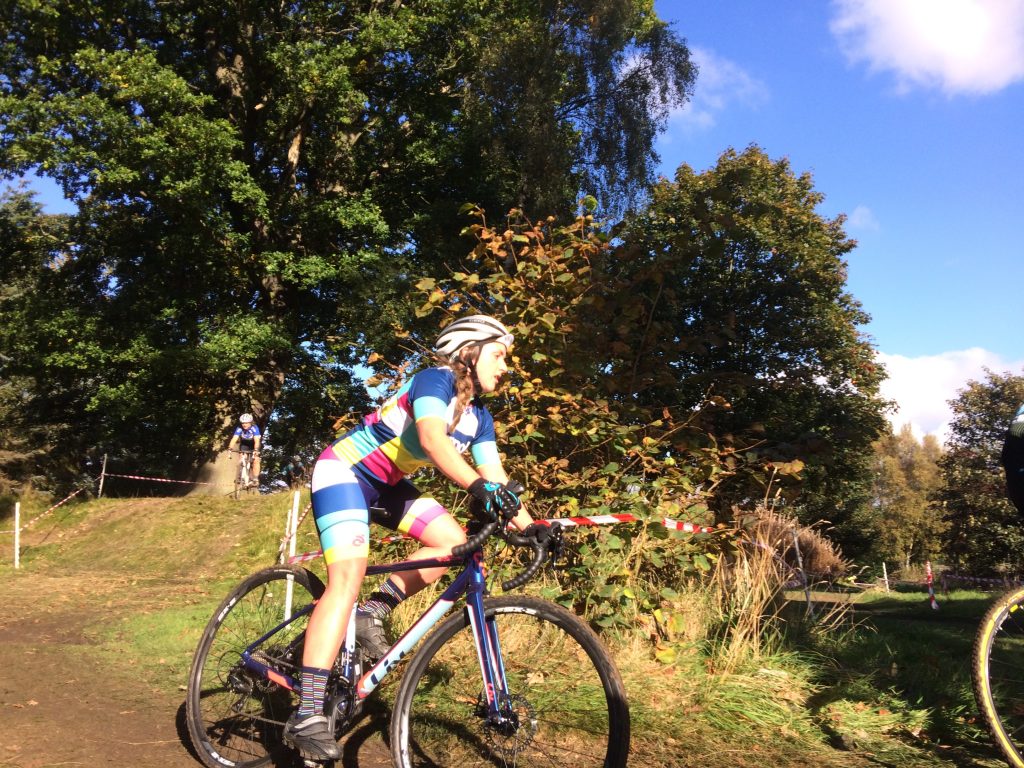 I can safely say that I absolutely loved my first ‘cross race. The atmosphere was amazing and the other riders were so supportive, even as they lapped me. And to top it all off, I wasn’t completely last, 21st out of 24 in the under 40’s women’s race. So, if you’re thinking about doing your first ‘cross race, do it! I can’t wait to give it another go this weekend at Knockburn.