Midnight on the devil’s beef tub.

Eachann, Chris, Niall, Jim, Ricky set off on riding Ride to the Sun last Saturday night. With Eachann and Jim off to the Transcontinental at the end of July and with the troops enamour for randonneuring we thought, let’s bloody ride down to Carlisle and double the ride distance. 100mi to Carlisle and then another 100mi back up to Edinburgh some excellent training with pals to share the pain. With Euan and Tom the Tory joining in Carlisle we had a strong wee peloton rolling north out of Englandshire through the Borderlands to the capital. Mr Egan recounts…

Hundreds of blinking red fireflies form a line we follow into the dark, silhouetted landscape. It’s the week of the solstice so the sun doesn’t set so much as hides below the horizon for a couple of hours. Leaving it’s green luminescence low in sky the way a child learning to play hide and seek leaves a toe out behind a door. I learned in school that the green is caused by the absorption of light in the atmosphere, red orange yellow green blue indigo violet. What you see is determined by angles. I know you’re there. A child will learn that because they can’t see you does not mean you can’t see them. I know you’re there. The sun hides, it leaves the heat of the day on my skin, etched sharp lines on my arms and legs and face and neck, a cycling tan, a burn. A burn. At midnight it’s father’s day. I knew the seasons changed by the skin on my dad’s back. He comes home one day, usually in April, with his whole back red as the mono-blocking he lays in rich peoples’ driveways. Red then brown, that’s order. That’s wrong though, what was order is now a burn. Maybe other things that I think are order are not in fact so. There are lots of questions in the dark. There is no brown if there is no red. It’s a burn. 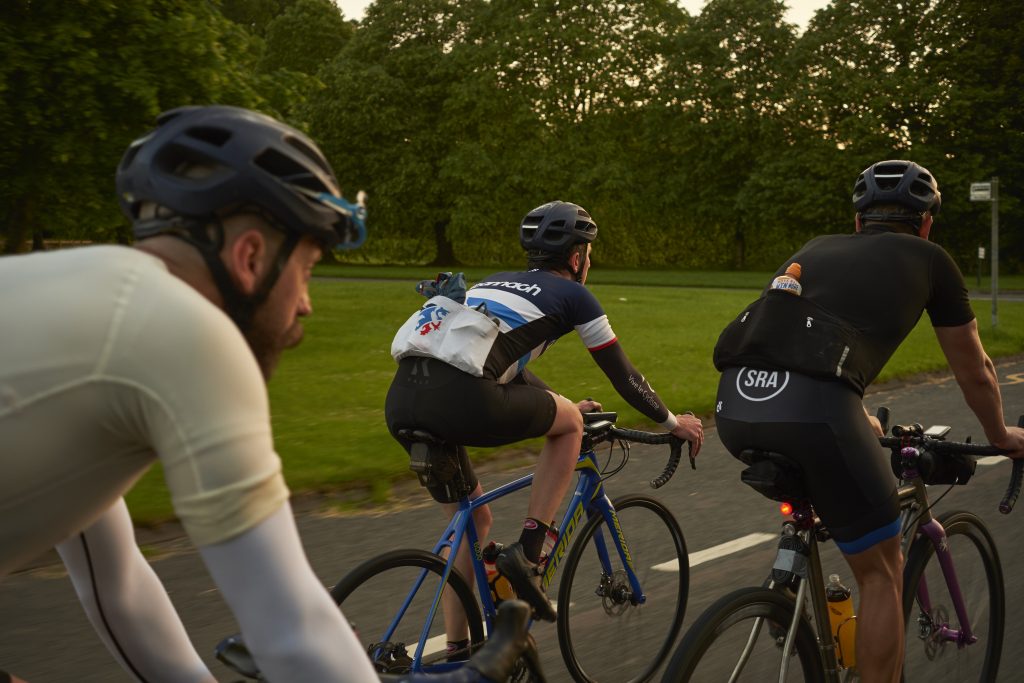 I think about after sun lotion, how I should not be surprised discovering that being out after the sun is soothing on my skin. Everything speaks to absence and presence and before and after, the sun’s temporary absence creating a soothing presence. I think about presence and absence and hot and cold and I think about balance and fighting. What does any of this have to do with cycling? The blinking red fireflies are the rear lights of hundreds of cyclists, away up the road in the dark. Why am I on the Devils Beef Tub at midnight? I’m cycling up it, taking part in the Ride to the Sun, a 100 mile night time ride from Carlisle to the sunrise on Cramond beach in Edinburgh. We left Glasgow at 11am this morning, choosing to ride the 100 miles to Carlisle, as a warm up for the event. Warm up it was, the sun turning my skin red. 5 and a half moving hours later we arrived in Carlisle well done. Burgers eaten all around we head off towards Edinburgh. Cyclists all over the road, some riders are cooperating into pelotons, making the air easier to cut through, sharing the effort. It’s only about 9pm just now and the sun is low and blinding in the sky, everything is golden. 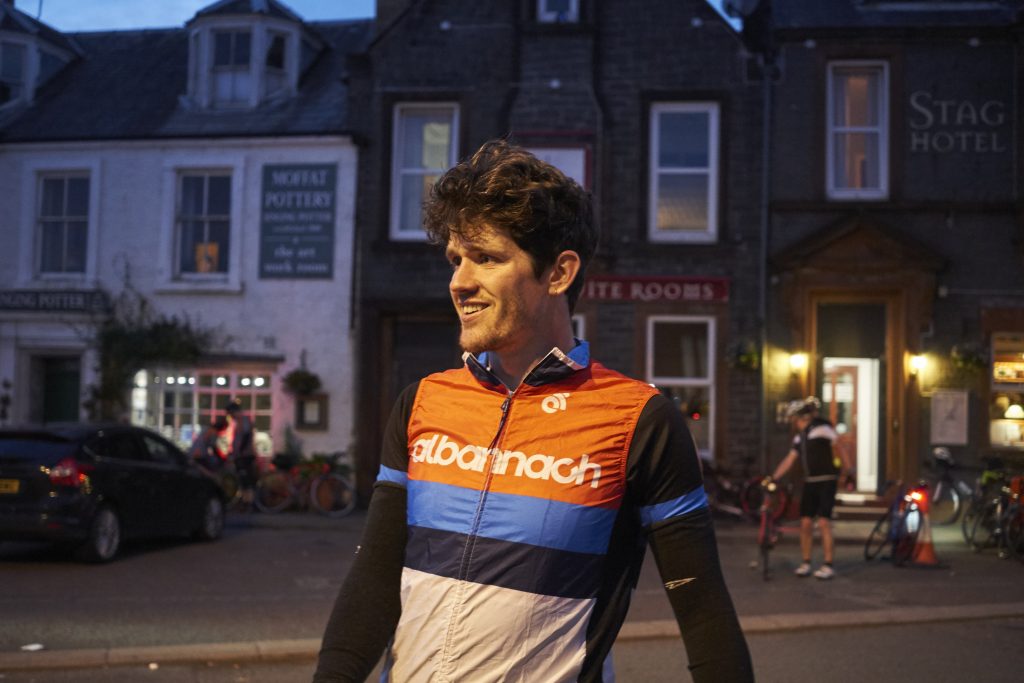 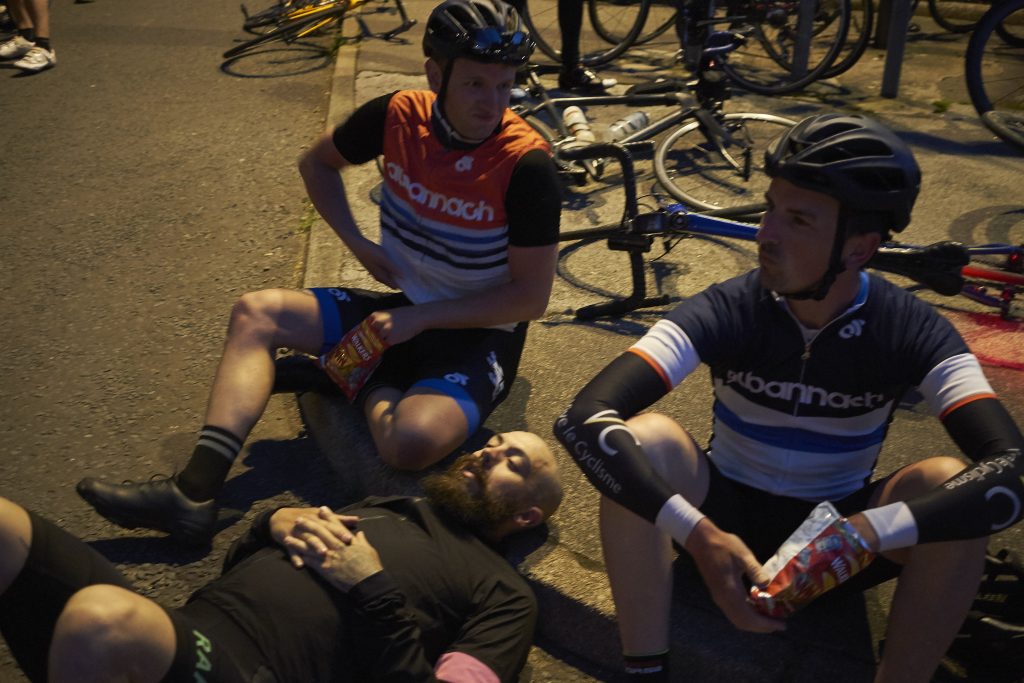 We arrive in Moffat where the chip shop stays open late for the event, the queue is enormous however and I still have a lot of brioche and Nutella with banana left, miles and miles of research has confirmed for me that it’s the perfect on bike fuel. I’ve also got a party size bag of Haribo for emergencies. We sit on the kerb in the village, the pub is bustling and full of punters on a Saturday night out. Some nights out are different than others but they’re also kind of the same, we’ll have different kinds of hangover tomorrow. We joke, we laugh, we yawn and breathe and decide to set off up the Devil’s Beef Tub.

The Devil’s Beef Tub. Good isn’t it? Hundreds of years ago reivers, also known as devils in the area hid their plunder up here, loons, lads, but not lunatics Wikipedia tells me. Here is a dramatic hollow between 4 adjacent hills, which looks like a tub for curing beef, hence the name. That’s a definition for daylight however, it’s approaching midnight and it’s just the blinking red line of a climb into the sky. A different dictionary for darkness. Chris is burst, having not done much riding recently but his sense of humour about it is a tailwind. Jim has the shadow of the transcontinental creeping up on him and he’s figuring it out. Niall is taking strong turns on the front and dealing with his own burns, they’ll blister tomorrow. Euan got the train down and is fresh and strong sitting on the front, ease up! Piano, piano! The loons, the lads, the devils. 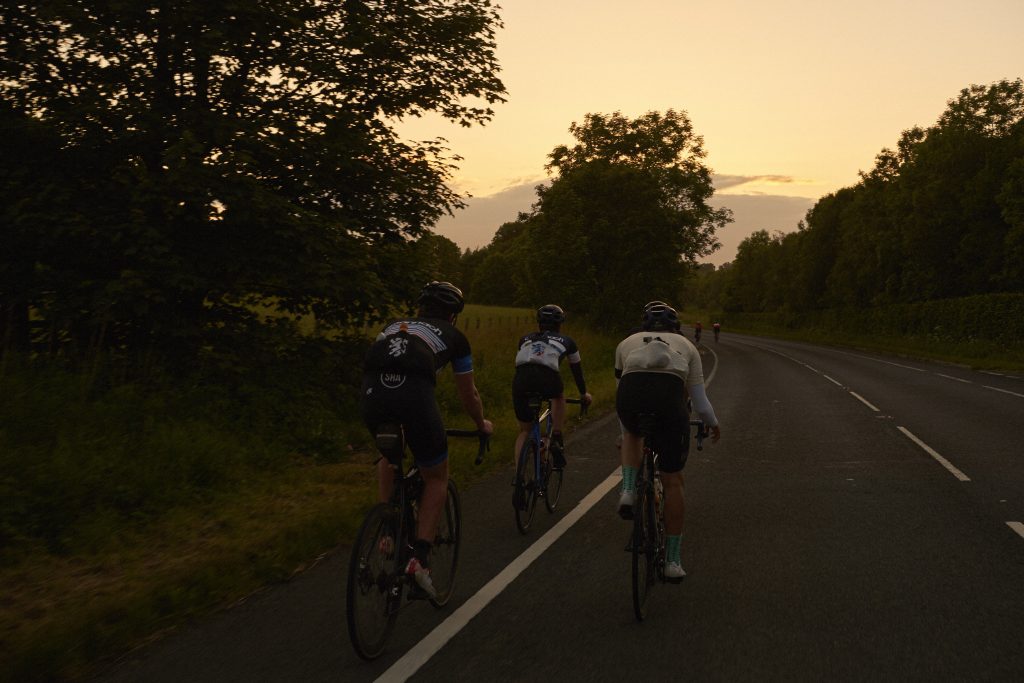 The world opens up downwards before us and we wrap up warm as we can against the post sun chill, the dark. 40 miles to go. See you soon, sunrise.