For every Christmas Day, there is a Boxing Day, and every year it has a difficult job. Following the best day of the year can be a tough ask. In this analogy, Kick in the Knock at the Knockhill Racing Circuit was playing Boxing Day to the Christmas that was Callander Park. Callander had been awesome. A beautiful sunny day in one of the best parkland courses SCX has to offer. Add to that the huge fields, multiple races and the general pageantry of a series race and it is hard to see how it can be followed. 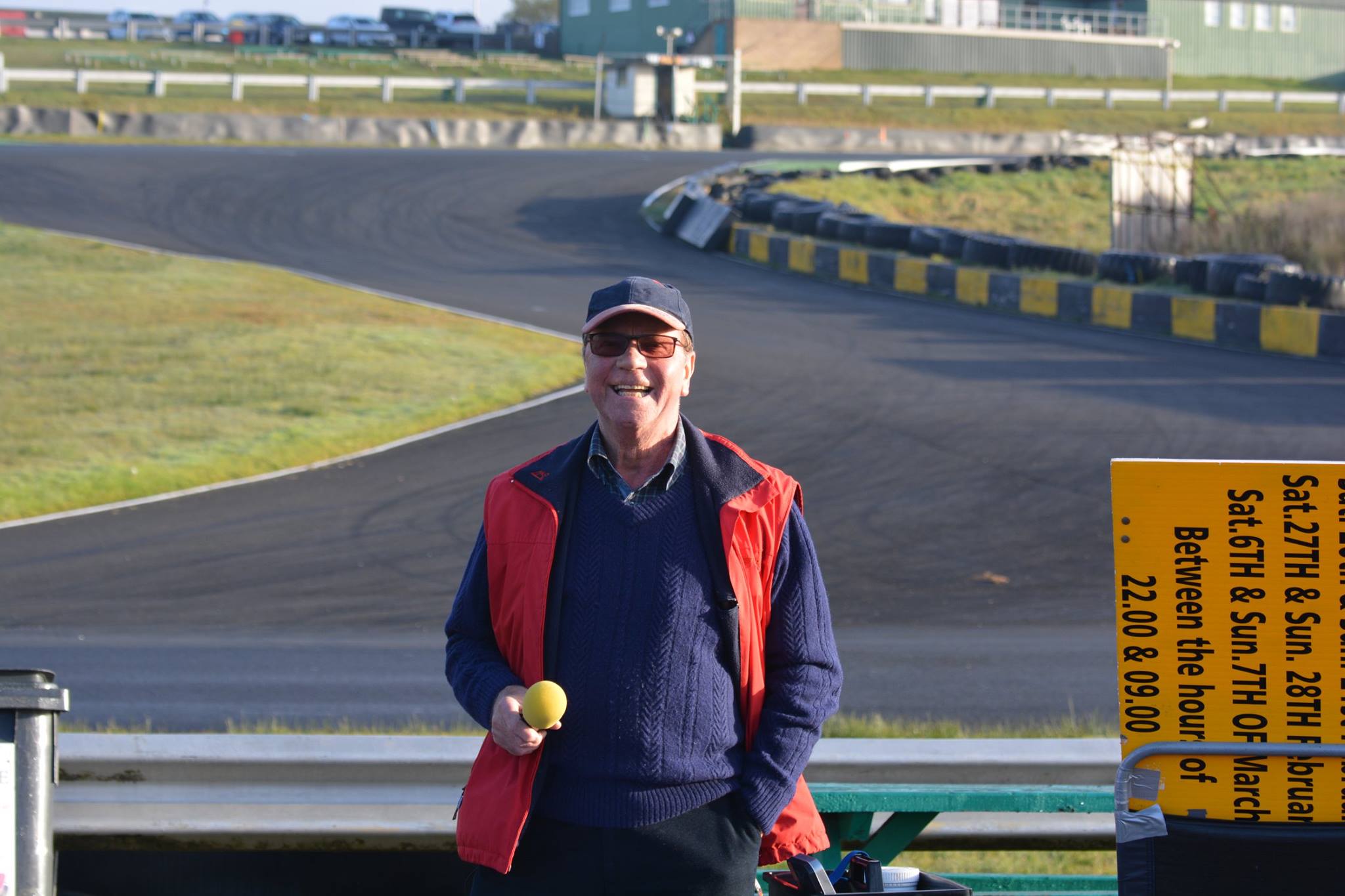 So hats off to Alex Potter and his team for putting on the next race in the SCX calendar. These non-series races are really helping to pack the season for us ‘cross fans with loads of racing. They are a great place for experimentation, both for racers and organisers. Some of this organisational experimentation saw a different format for the days racing, with the U16 juniors racing in the first race over long laps and duration and then the senior men having to contend with an early start for a change. Unfortunately, the early start seemed to have deterred some folk, judging by the relatively small field. 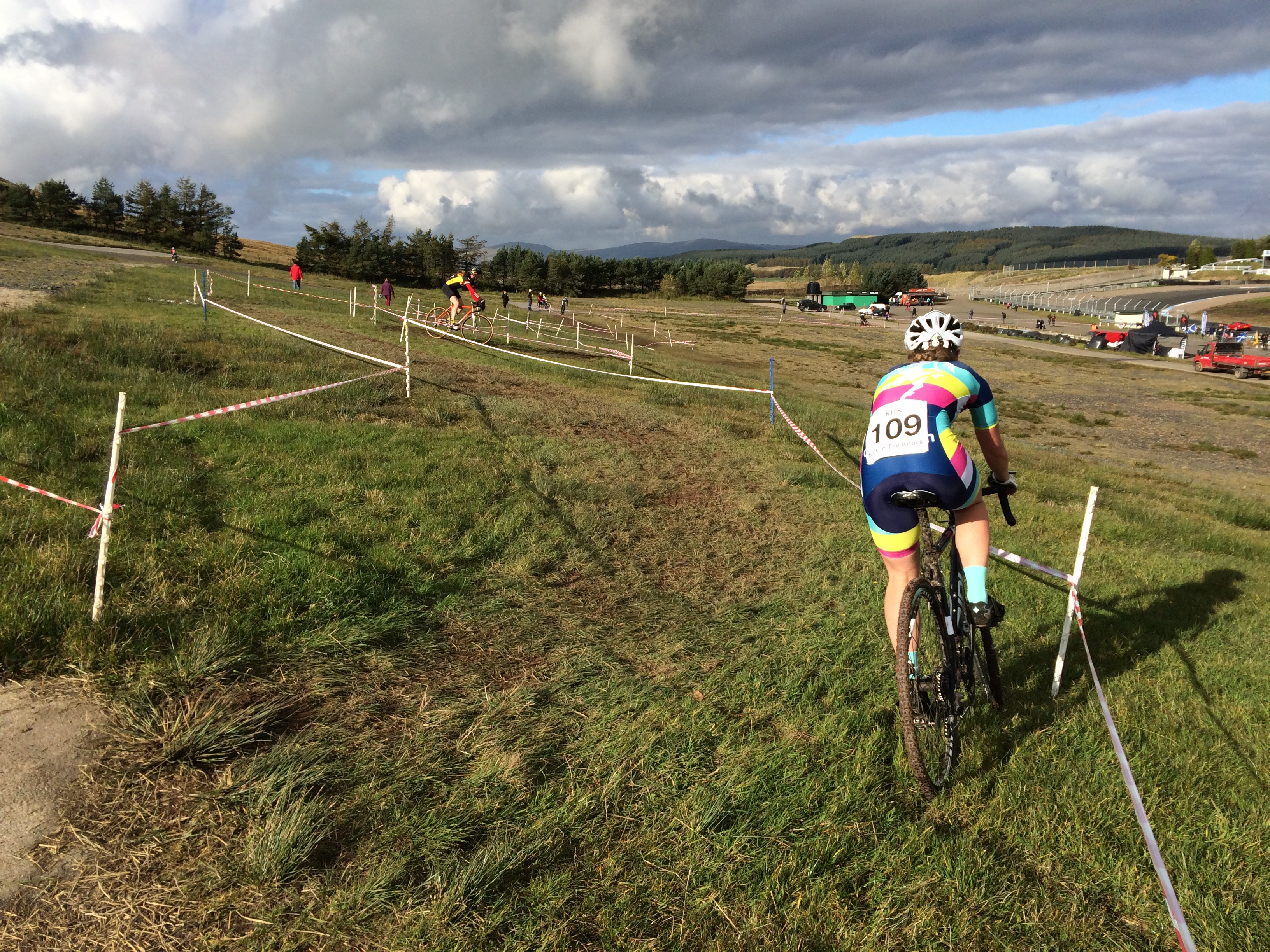 We arrived (SCX is a truly family occasion in our household these days!) just as the senior men’s race kicked off. A good race saw Gary MacDonald (Hope Factory Racing) take top spot from a hard chasing Sean Clark (Team Thomson Cycles). Graeme Neagle (Dooleys Cycles RT) burst onto the ‘cross scene, taking the 3rd podium spot. The course looked long…and hard…and hilly. Judging by the number of grimaces and snotted noses, there definitely weren’t going to be any freebies handed out today! 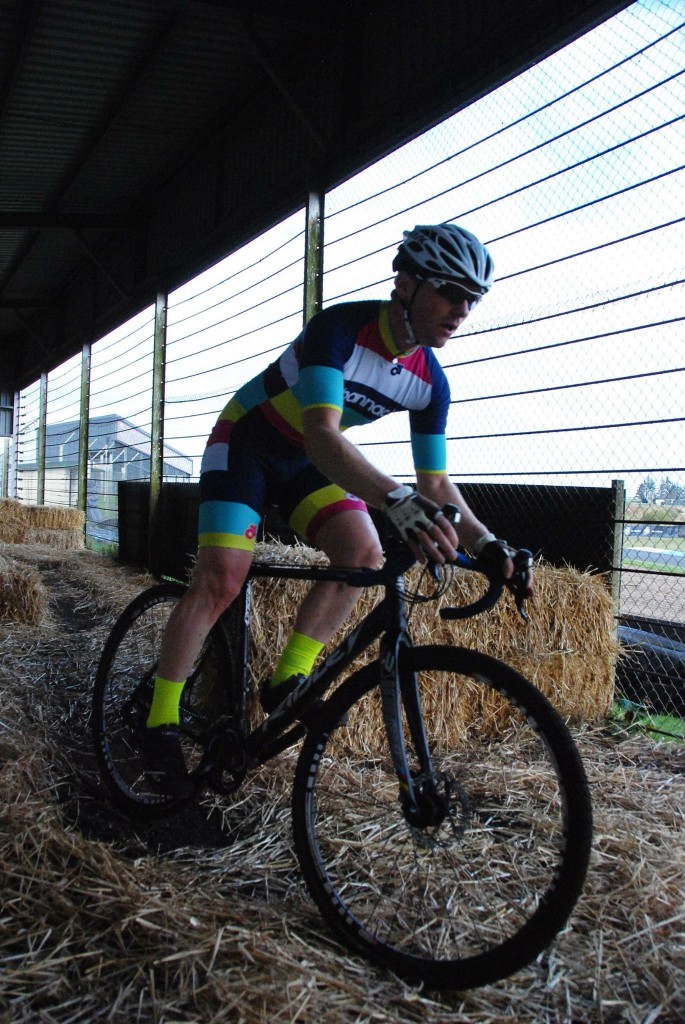 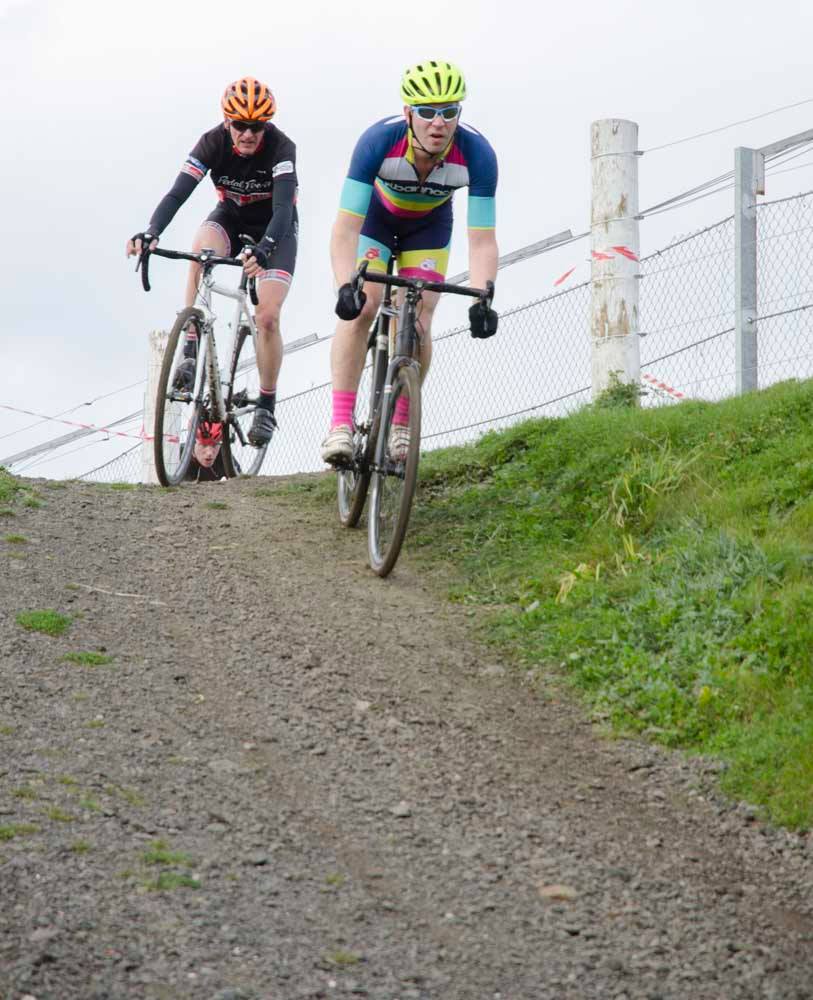 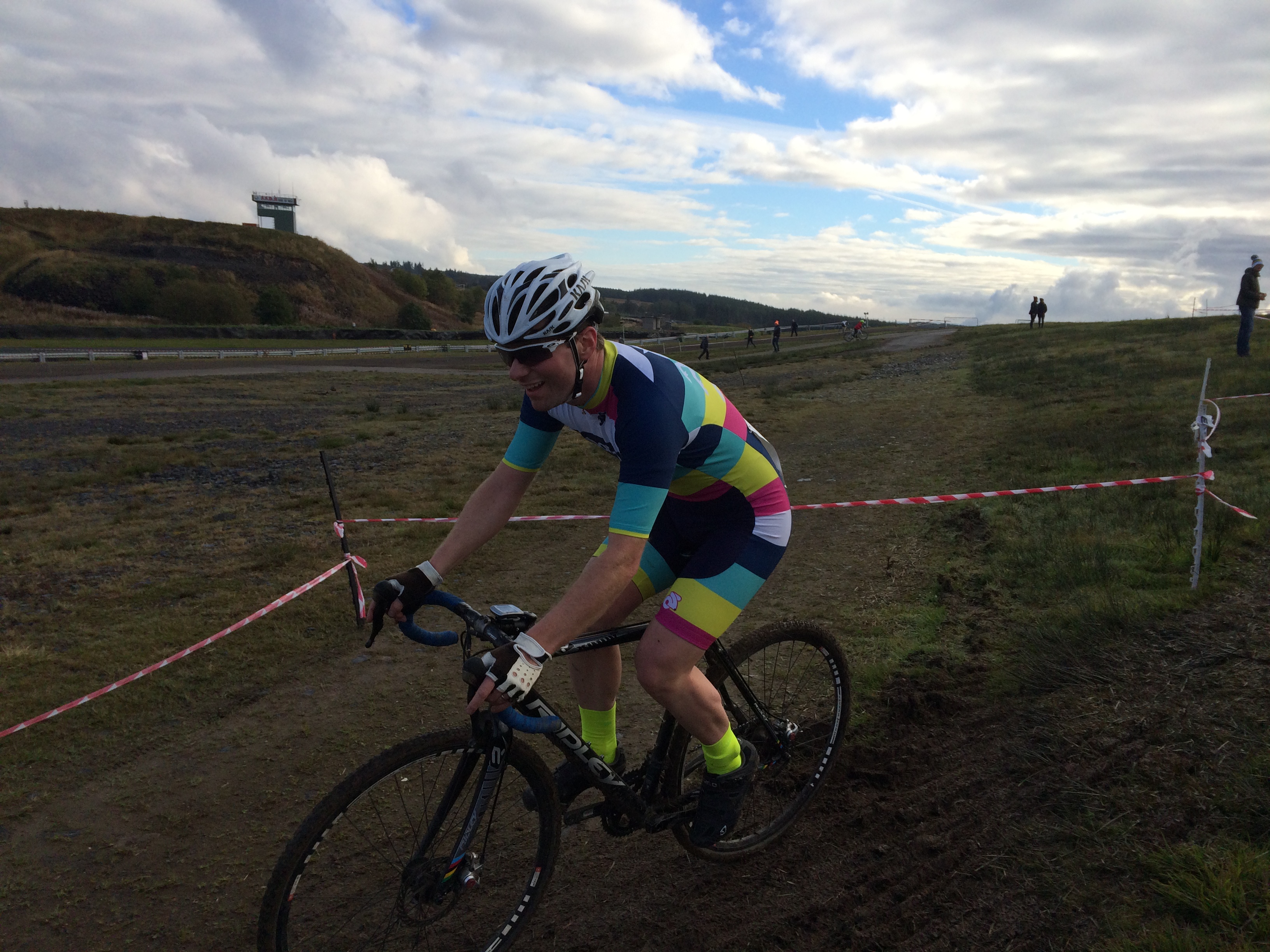 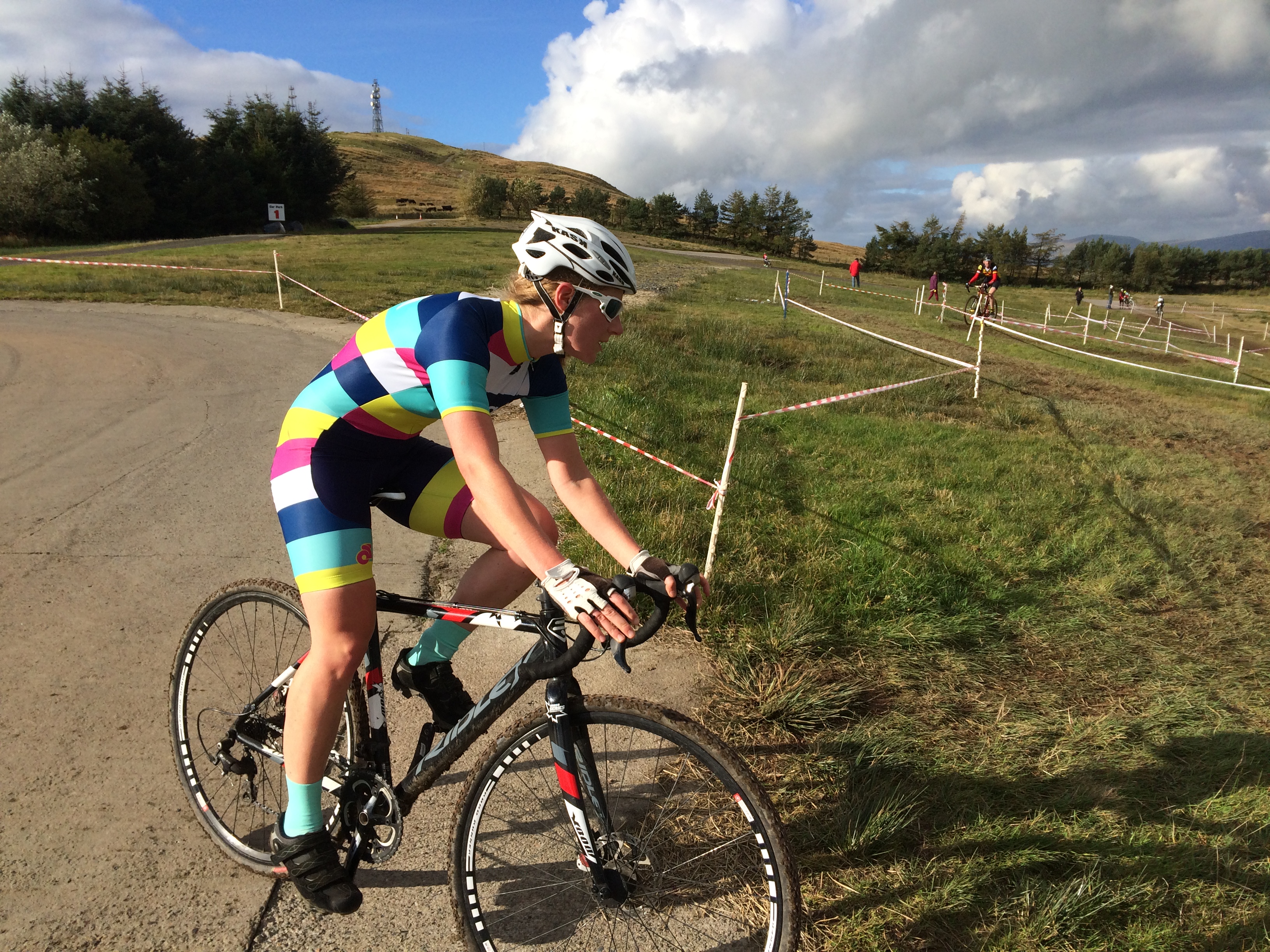 The ladies race was won by Katie Carmichael (Hervelo Cycling) from Elizabeth Adams (Glasgow Green Cycling Club) who were followed up by a little bit of SCX history. You may have noticed (unless you suffer some form of horrific colour blindness!) the new kids on the SCX block at races this year in the form of SR Albannach with the multi-coloured skin suits. Well, the third step on the podium in the women’s race was taken by none other than our own Mireille Captieux (SR Albannach). The teams first podium. Chapeaux! 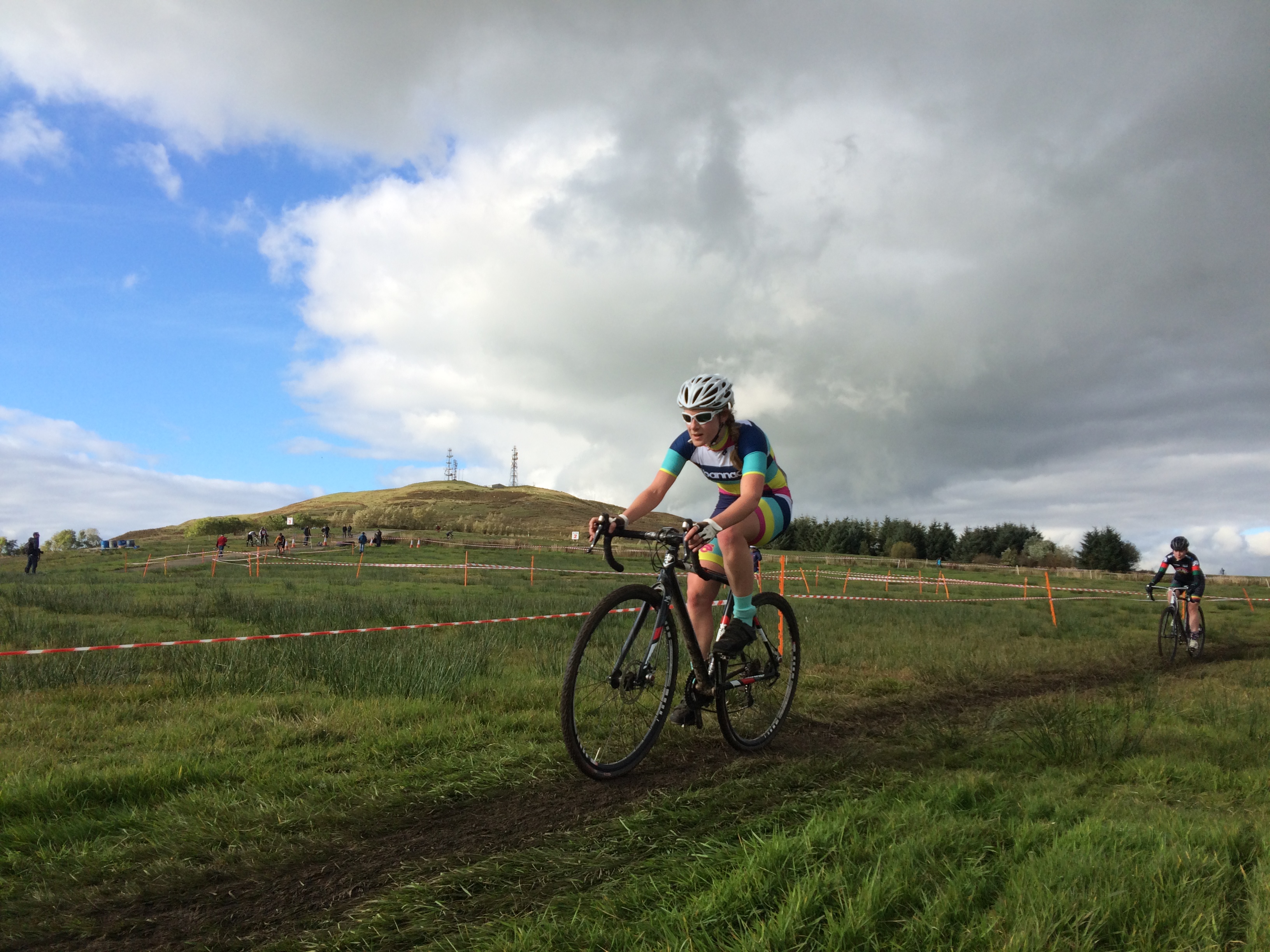 Now to prepare for my race, the V40 category. Stripped and changed and a lap or two of the course. The usual questions being asked. “You been riding much?” – never expect an honest answer to that one – and “how much air you got in your tyres?” – likewise, never expect an honest answer there either, but today it had more significance than usual. A course with lots of gravel and stones suggested a relatively high pressure was needed but soggy, tight grass turns had you yearning for low pressures. A tough call. I opted to shun my usual tubular tyres in favour of clinchers with plenty of air. With hindsight, after a puncture free day, I think I got it about right. 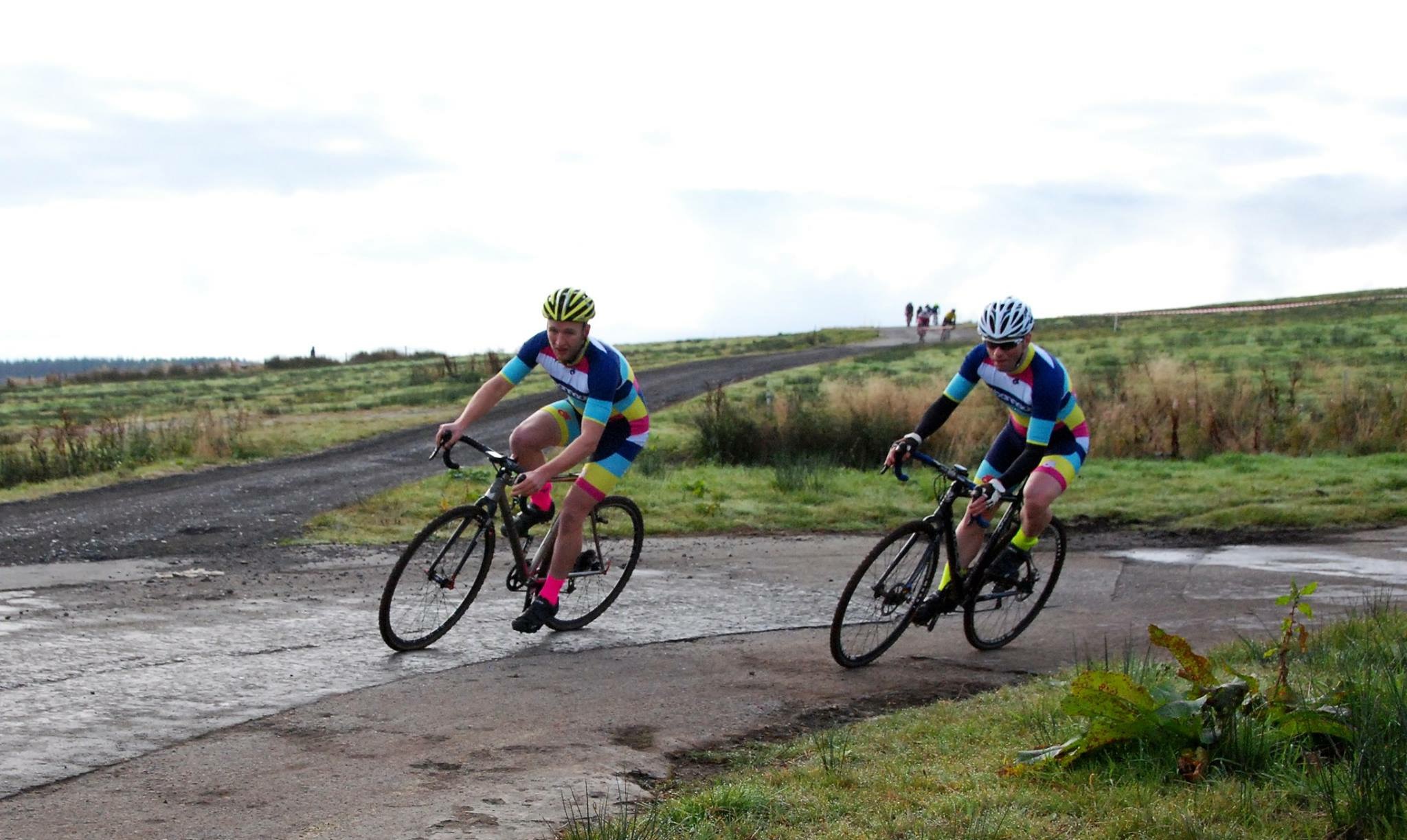 Since I had arrived, there had been a gradual flow of riders arriving at the venue. As ever, the V40 race was to provide the largest field of the day (I thought being a vet was going to be easier?)  As we lined up on the start line, the good news was that the wind had dropped a little. The bad news was that for some sadistic reason, the organisers had decided to make us ride for 60 minutes plus one lap! Despite the flurry of protest burst of unfettered enthusiasm from the field, this was going to be a long day in the saddle.

A failed gun shot and a whistle and we were away. A long steady climb to start, gravel under the tyres (a feature of the day). Already some riders disappearing from view, not to be seen until I become “+1 lap”. The usual battle with trying not to go over the red line too early. How hard is too hard? The pessimist in me wins the day and I decide to settle in and ride the long race. 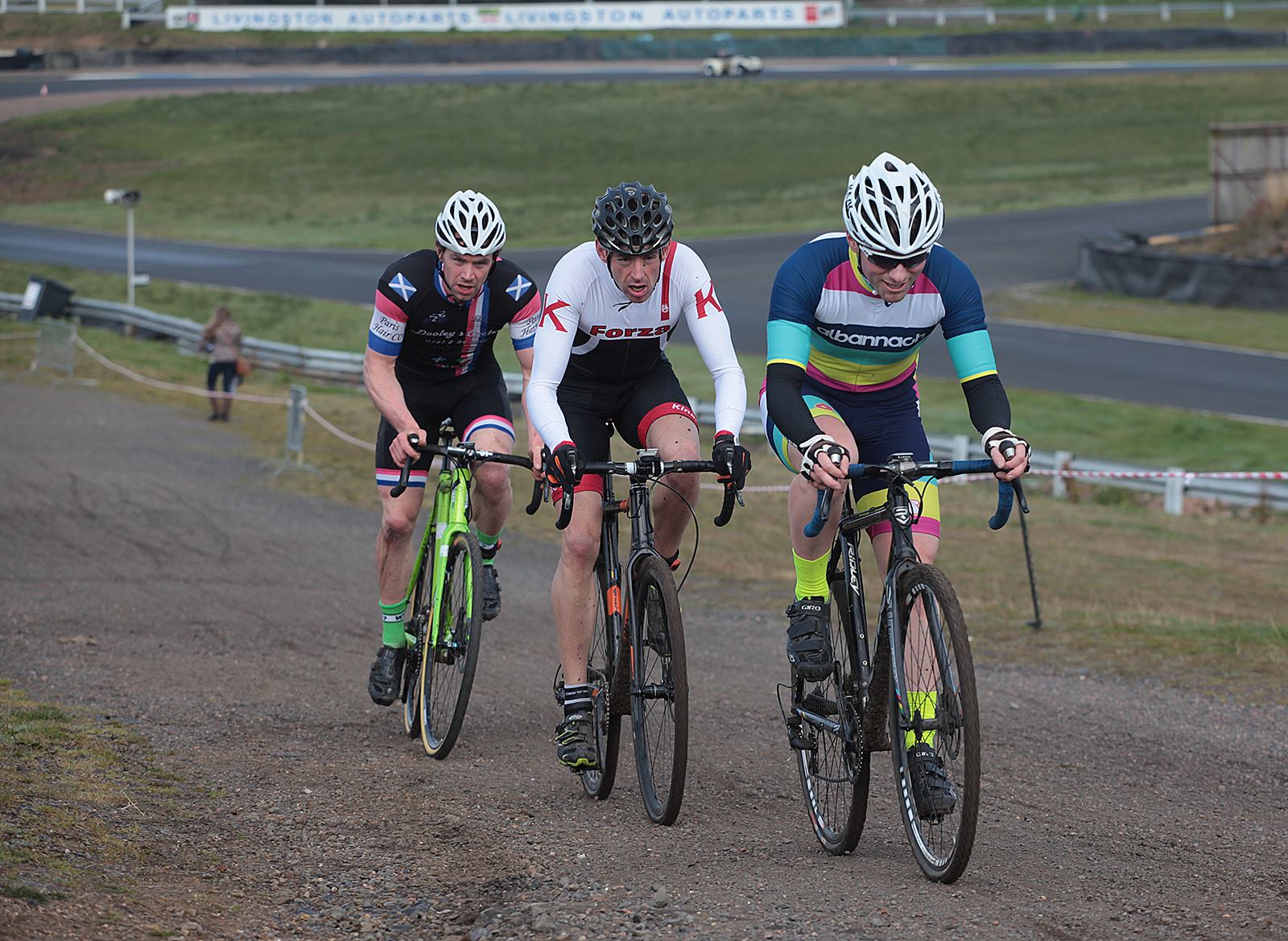 After the climb, a tight left hander round a large tyre. The field is bunching as ever on the first corner. Into grass and some sand. Tight turns then off into an (indoor?) barn section round some hay bales. A very sketchy descent next to a large, ominous looking rock and a dismount for some steps. Caught up some places here. The dismount/ remount training is paying off. Into the second of the climbing sections, as we turn and head back towards the start. The headwind has gone but it’s still tough going. Already at this early stage, the legs and back burning and the ‘race within the race’ has been set. One of the beauties of SCX is that there is always someone close to you in ability for you to race against. It doesn’t matter whether you are at the sharp end of the field or near the tail (like me) there’s always someone close by ready for a duel. My chosen prey for the season (who will remain nameless) was absent for this race, so a new target had to be identified. Half a lap and I had zoned in on the back of rider 141. Perfect.

Up the tough climb and then descent over tarmac hairpins followed by tight, grass, downhill turns. Much concentration required. Tried hard to lay off the brakes (more practice needed) and ride ‘tape to tape’. Down a wee drop and back over the start/ finish line. Was that really only one lap? 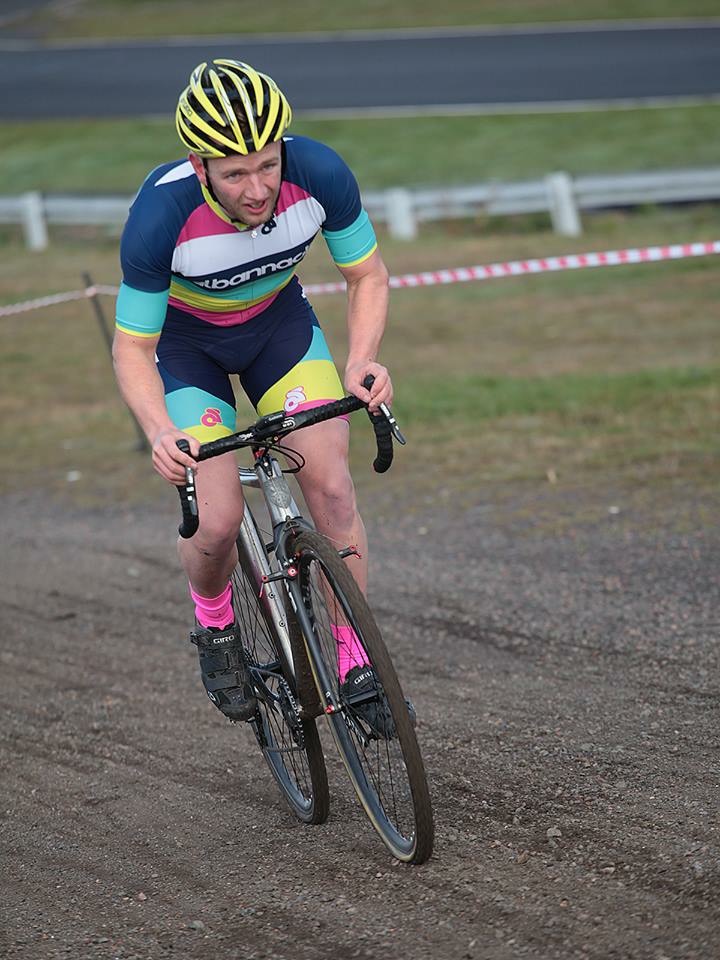 My battle continued on the second lap until I took the ‘tape to tape’ theory a little too far and ended up with tape snagged in my front disk brake. I leant down and tried to pull it free (without losing my fingers) but it was stuck fast. What to do? Keep riding (and risk a wheel jam and losing some teeth) or stop and try to pull it free. In the end, I stopped (I quite like my teeth) but even then it didn’t want to give up. I watched helplessly as rider 141 and a good number of others rode away as I had less luck with tapes than Paris Hilton. I eventually got going again and resigned myself to fighting back the places I had lost. I never saw rider 141 again but it wasn’t for the lack of trying.

By the end I was hot, sweaty, knackered, still in one piece and smiling. Not a bad day at the races and definitely lessons learned for future races. Thanks to the organisers for putting on our ‘Boxing Day’. It’s not easy being fun without any gifts but then I guess that’s what good ‘cross racing is….’fun with no gifts…’

Results from Kick in the Knock 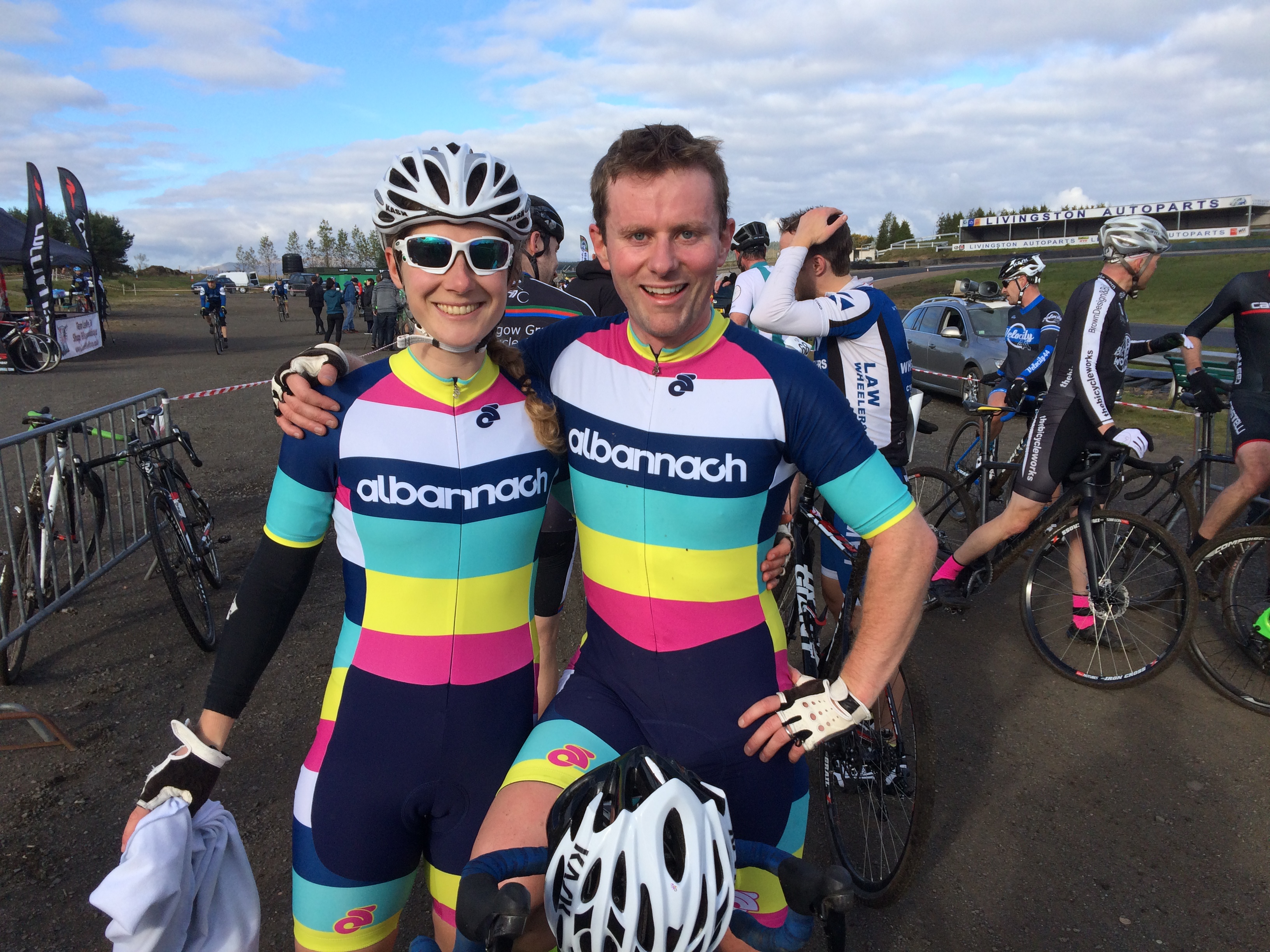 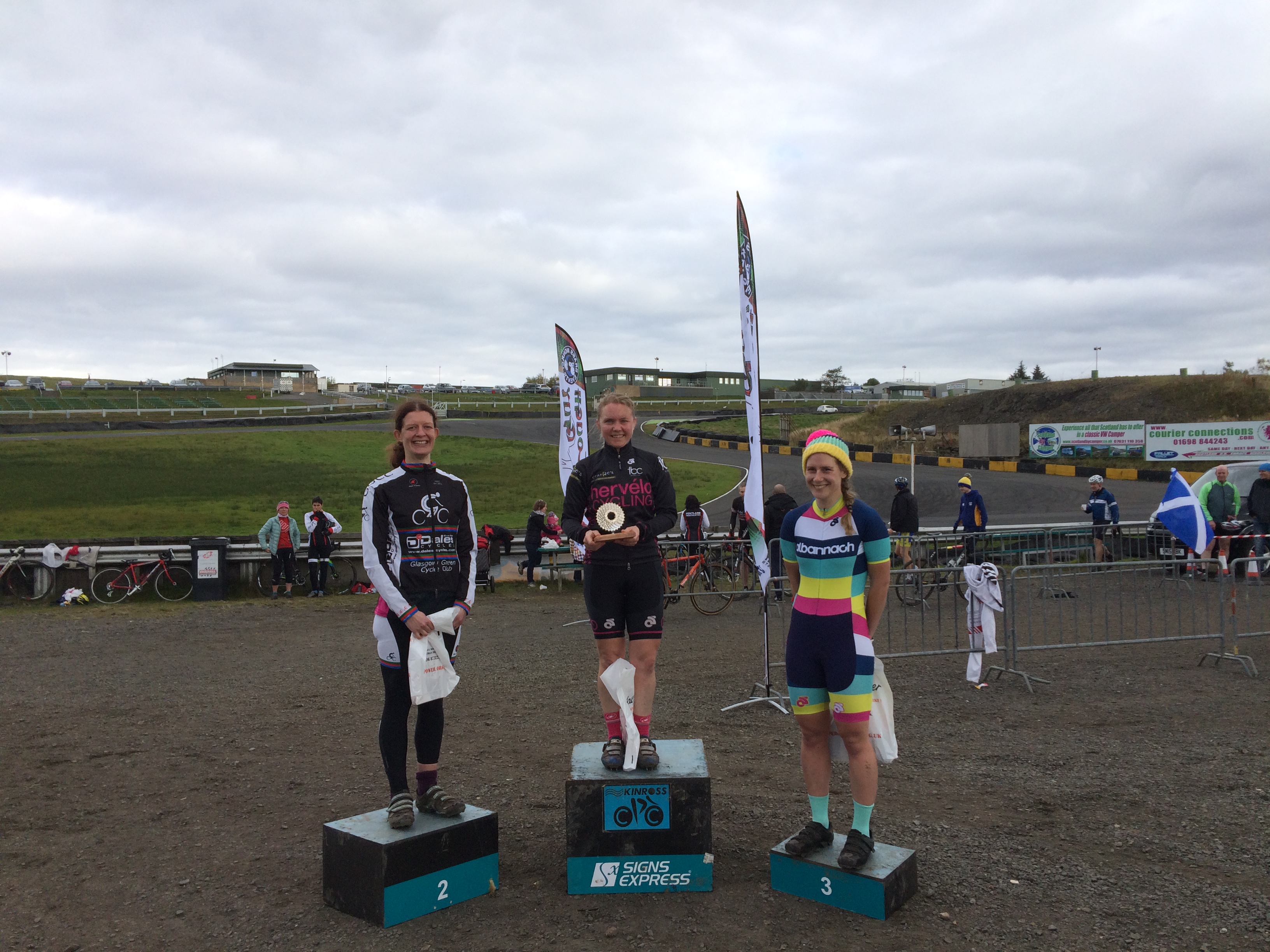