Cyclocross has been, for a long time now, one of my great passions in life. I’ve been ‘racing’ cross for around 7 years and long for the next season at the close of the previous. I started, as most do,  racing junker bikes I’d Frankensteined together. I did this for a few years until I decided I’d take more control and set out to create a frame of my design. The CROIS came about simply out of a desire to create something I felt was unavailable, my perfect racing machine. The first CROIS was always going to be a prototype and of course a prototype with a couple of imperfections. I’m an engineer by profession so the mechanics of frame design came quite easily to me. Understanding the finer details of design rationale however I will constantly learn. 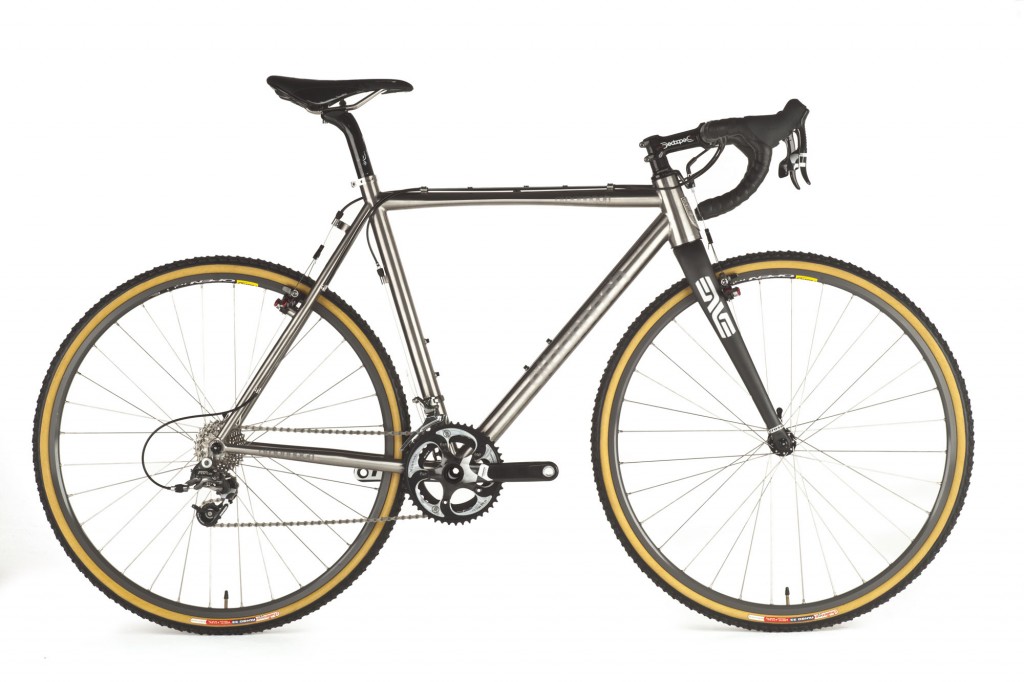 Large diameter tubes (44.5mm Ø DT, 34.9mm Ø TT & ST) were adopted all around the frame, for the most part to improve stiffness of the frame but also because personally think big tube frames look rad. At the time of design, tapered head tubes for tapered fork steerers were pretty common place for cross country mountain frames though quite rare to see adopted on cyclocross frames. Aside from the obvious killer aesthetic, adopting a tapered head tube allows for a larger diameter down tube to be used and hence increases stiffness of the frame. Having a larger ‘footing’ at the crown race, through 1.5″ diameter bearings, will act to reduce shock as axial forces are spread across a larger bearing surface.  That said, it does make shaping the head tube badge onto the tapered head tube a labour of love.

The top tube of the CROIS is flattened on the underside to increase the surface area with an aim to improve comfort when shouldering the bike. Typically in ‘cross races (or at least in what I think as a typical ‘cross race) you’ll be required to shoulder the bike at least once a lap. 8-10 repetitions of running with the bike on your shoulder and you’ll be feeling it in the morning. Cycloross is a demanding sport as it is so this added feature of comfort I think is a must. 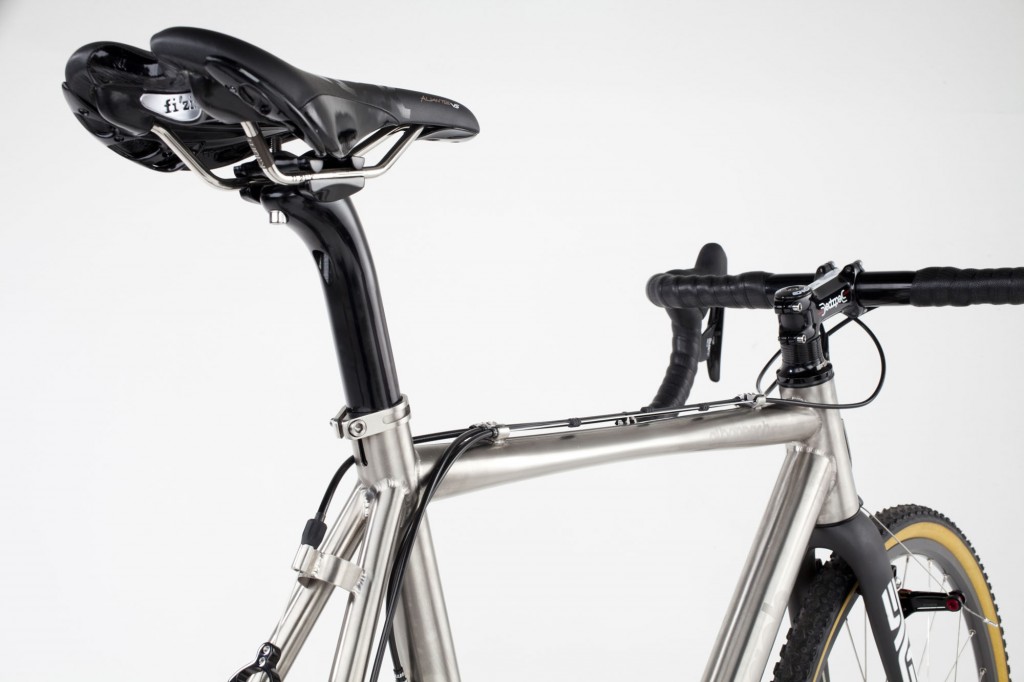 27.2mm Ø seat posts seem to be the standard in terms of seat post diameter. For me though, increasing the seat post diameter (to 31.6mm Ø) spreads the axial forces, shooting up the seat tube, through more material and hence reduce shock and improves saddle comfort.

One of the main design requirements was to create a frame with as much mud clearance as reasonably practicable. Cantilever brakes as (traditional) standard paired with flared out stays and curved stay bridges does this. The CROIS has incredible clearance and in the three years of racing this machine I’ve yet to clog up the rear wheel. The rear wheel has a lateral clearance of 12mm either side to stays and 43mm longitudinal clearance to stay bridges for a standard 33mm cyclocross tyre, clearance for days. This is also meant that I could bulk up the tyre size to easily convert up to monster cross. The frame itself could realistically accommodate up to a 56mm tyre (or 2.2″ if using 29er tyres) though sadly I was limited to the maximum tyre clearance of the ENVE fork, 48mm. In any case it demonstrates the clearance available on the CROIS. That said, I’ll hold my hands up to say in striving to maximise mud clearance I then reduced the range of compatible chain rings due to outer chainstay edge clearance. This didn’t matter so much for this particular frame as I was always going to be riding cyclocross gears however if you wanted to up the rings to say compact or standard road size chain rings, they wouldn’t fit. This is all part of the learning-from-prototypes-process and since then I’ve created detailed design criteria to ensure internal and external stay clearance are optimised for end use. 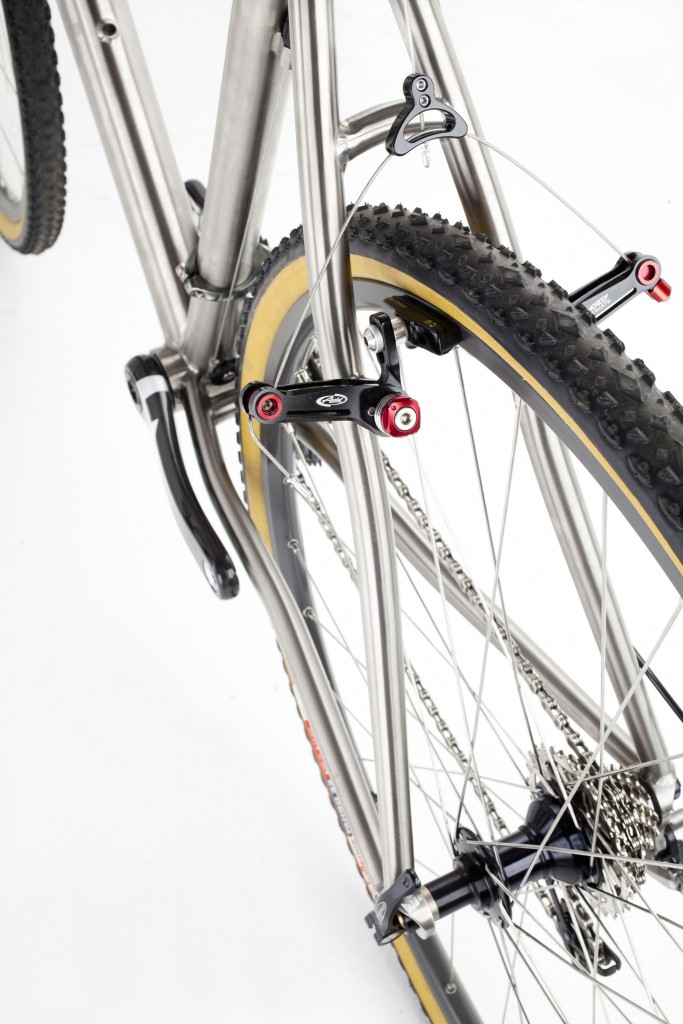 By using larger diameter tubes the overall weight of the frame is going to increase. A way to decrease potential weight I looked to the new bottom bracket standards. BB30 standard, at the time, seemed to be the answer in that it reduces weight (as it consists only of a pair of bearings and circlips fitted into a significantly lighter bottom bracket shell) and increases stiffness (through bearing a 30mm Ø crank axle). This does however require manufacturing tolerences to be extremely precise. BB30 standard calls for bearings pressed directly into the frame. Too large a shell diameter will result in the bearing moving internally and loads unevenly distributed, leading to bearing wear-out. Too small a shell diameter will lead to the bearings being compressed against the axle which too leads to bearing wear-out. These tolerances sadly proved a bit difficult to guarantee and for this reason this will be the only Albannach adopting BB30 standard. SRAM’s PF30 adopts a standard based on BB30 principles yet mitigates the tolerance heartache by using cups fitted into the shell, seating bearings into the cups. Since the first CROIS this has been my go to BB standard, I’ve not looked back. 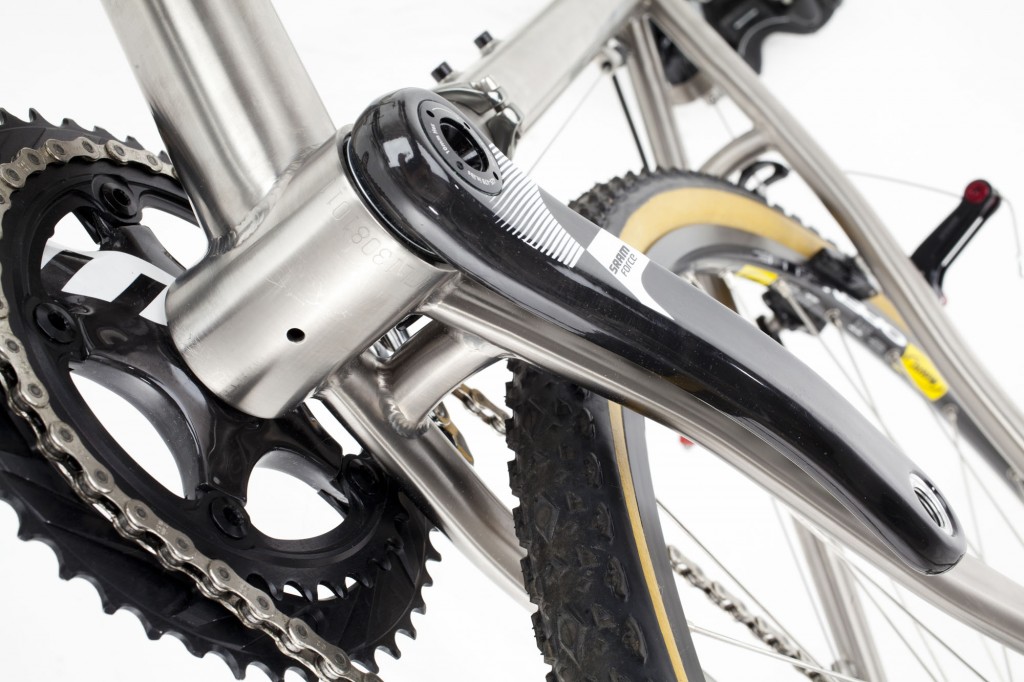 The cable routing is a fairly standard cyclocross setup. In contrast to road frames where your derailler cables would usually run down the down tube, all cables should run along the top tube. The reason for this is two fold; one to avoid tearing chunks out of your fingers overtime you dismount lift the bike up by the down tube, and second to mitigate, as much as possible, muck clogging around your cable stops. This does present a cable issue with the front derailed in that road deraillers are down pull. The CROIS was therefore designed with an inbuilt pulley system to allow for down pull deraillers. On the whole, I wasn’t entirely satisfied with the cable routing on the frame. Limitations of available cable stops meant i had to have two cable stops and once cable holster, essentially meaning the rear brake was fully cabled. Just from an aesthetic point of view it didn’t work. Ideally i’d like all the cables to be internally routed, especially for cyclocross frames to really close out the chance of cable deterioration. Without spoiling the surprise too much, all Albannachs are now fully internally routed. 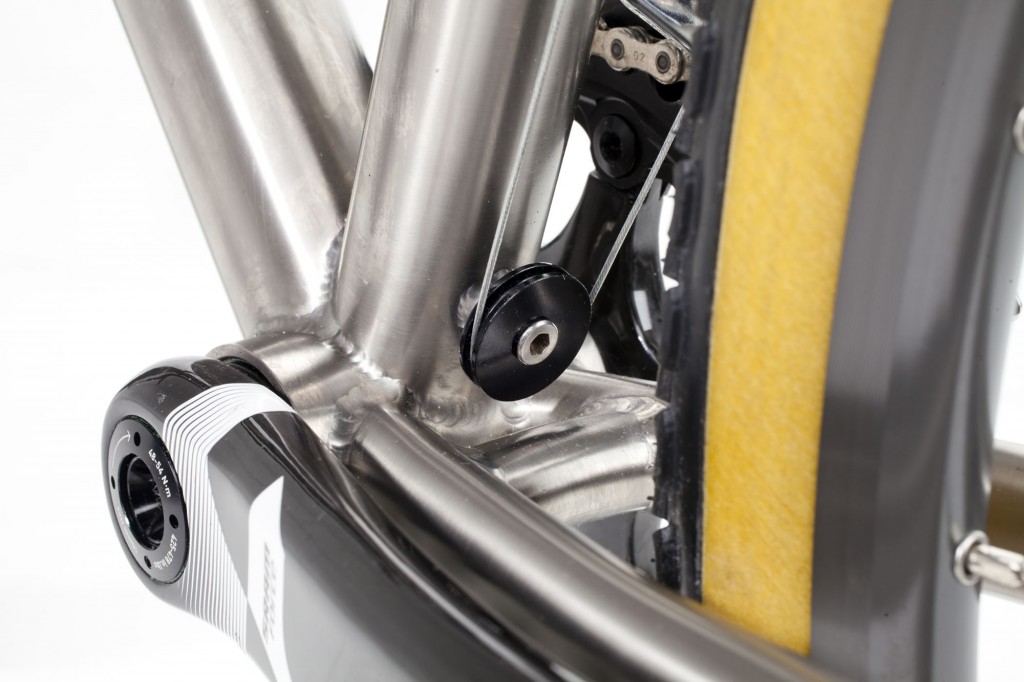 A note on the aesthetic. I think you’d be hard pushed to find a titanium frame on the market that has applied branding and artwork without the use of decals. This was just not acceptable to me. The CROIS adopts sand blasted logos on a brushed frame to create a contrast logo. At the time of when the photos were taken the logos were very subtle. To the point that you had to look hard to identify. Thankfully since that photoshoot, my manufacturers have developed there methodology for sand blasting and it now creates and much clearer contrast, yet still quite subtle. 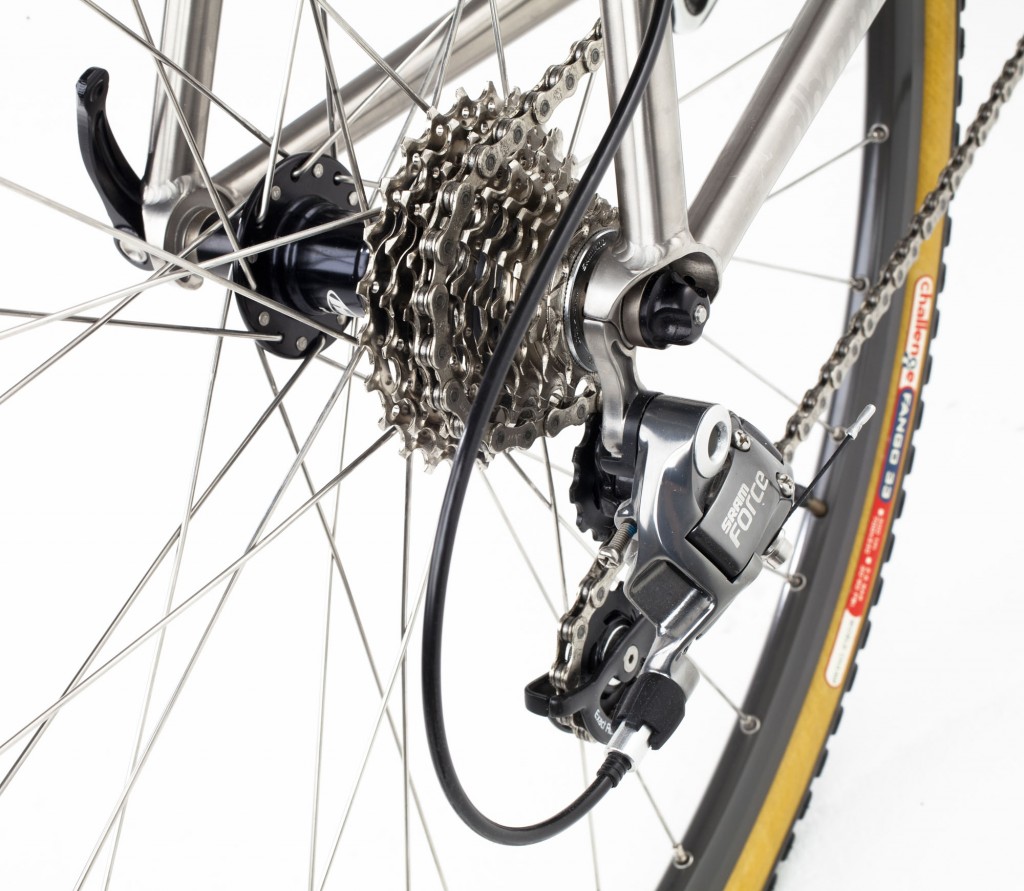 Two seasons of the initial build and I really wanted to give 1×10 a go. SRAM Force CX1 leads this market, infact I think it’s the only specific cyclocross 1 x 11 (10) groupset. Though my old Hope Pro 3 hubs would only allow a 10 speed setup. While the Force CX1 rear derailler is 10 speed compatible, I couldn’t justify the cost for a crack at the 1×10 setup. Step up the SRAM X9 rear derailler, which essentially is exactly the same as the Force CX1 rear derailler at a third of the cost. The single CX1 chainrings were just about compatible with my Force crankset and the left shifter paddle just became redundant. Season 3 of the CROIS was to be ghetto CX1. I absolutely love this setup. Take a wee look at the ghetto CROIS 1 x 10 setup in the gallery (caveat – camera skills in the woods need some work!)

When initially setting out to create the frame it would be easy to just borrow geometry from a previous frame or even one you really desire. Though there’s nothing particularly wrong with this it did get me thinking quite a lot about geometry and how a range of frames would work together. This set me down the path of creating my own geometries and hence geometry tables. I will pull together some post at a later date about the geometries I’ve developed for my cyclocross and road frame designs but for now, here’s the geometry for Albannach CROIS frames. Out of interest the prototype CROIS is a ’52’. I really don’t want to just call them 52s or 56s but I guess the industry calls for some sort of de-facto standard.

The CROIS was always going to be prototype. My designs have developed and the capabilities of my manufacturer have expanded. With it comes the need to retire the prototypes and move onto improved versions. 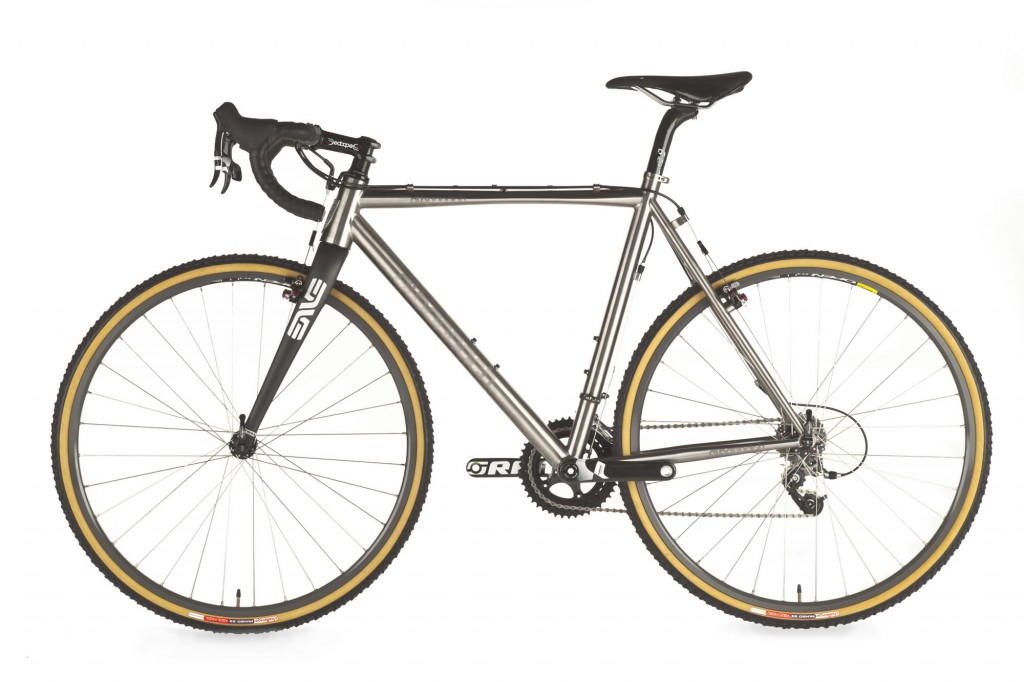