Aff the back in Alford

I was gutted to not make it up to the Scottish Championships at Knockburn last year. Based on my experience of the DTCC race in the ‘shire the year before, the champs were sure (and were confirmed) to be a good thing. When the 2015/16 fixtures came out I was stoked to see Mr Watt and Co. were going to put on a new race to add to our every growing calendar. Week in, week out the green cats of the Dee religiously arrive in numbers at races all over Scotland. Most of which must be a good three hours from their respective homes. It is only good and fair that I get up there to support my sheep-shaggin friends of the north. You might foolishly say that was the main driver for the visit but you’d be far from the truth. The DTCC guys always put on a good show and the inaugural Alford CX was no exception. I love racing ‘cross and I fully intend to race every single race I can get to this season. Being an organisor of a race myself these days, getting to as many races as possible brings about it’s own obvious inspirational rewards.

The inaugural Alford [aff as in tapsaff, not all as in ballbag] CX was held in the grounds of the Grampian Transport Museum, in Alford. It’s not a massive venue but Gordon has done an amazing job with the space to create another top cyclocross course. The bulk of the course weaves in and around the grandstand, museum of the ‘shires very own slow-poke Nürburgring. Long straight sections on varying terrain of blacktop, hardpacked and slow-rutted grass and pine needle laiden alleys, fast berms and exciting off-cambers, spiced up with short wee digs, drops and dead turns topped off with the usual man-made obstacalia made for a fast, fun and challenging course. 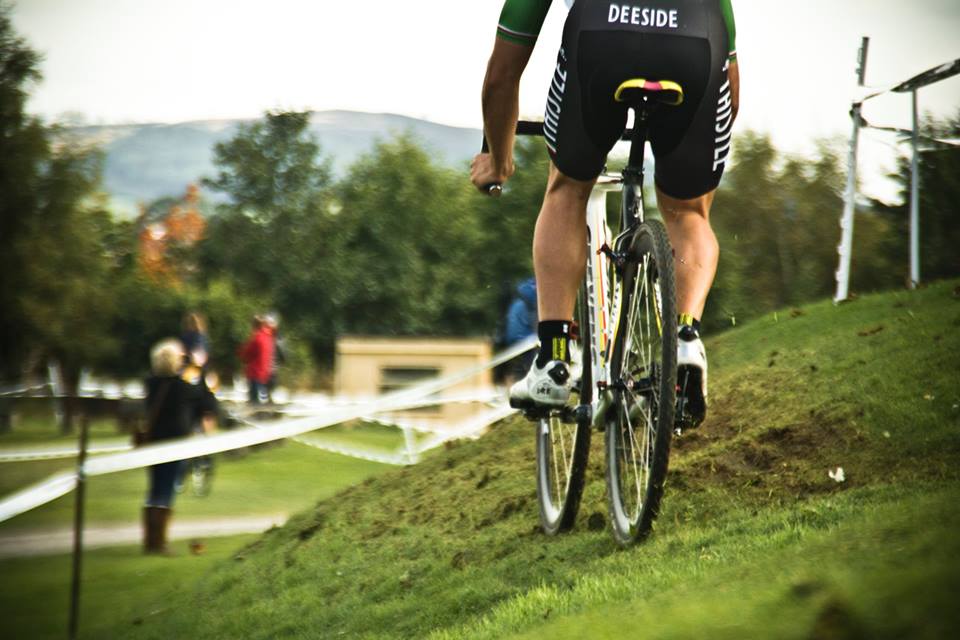 As SRA Sgiobair (DS) I gladly offered up driver duties taking fellow SRACX rider John McComisky and Glasgow neighbour, good guy and this season’s close race rival Euan Lindsay (Hardie Bikes) up the road. An early start, some wrong turns (ahem Euan), sugar lows and the JMC’s lack of left-right understanding meant I was pleasantly on edge on arrival. It was quickly quashed once I got into the venue; the music pumping, the B-riders were already hurting and the friendly faces of the SCX casuals all trash-talking. I just love this race scene.

I’ve never really been one for the fancy warmup roller/turbo at races. One – I generally can’t be bothered lugging my turbo to races and two – I much prefer to warm up on the course. If it’s particularly clatty I might only do a couple of laps. Alford was bone dry except for the odd soft drag or corner. My usual warm-up routine is three laps. The first a soft pedal. The second a bit harder, focussing more on the challenging sections, predicting the certain bottlenecks, locating where might be an ideal place to run the first lap [I’m never going to be getting a holeshot for a clear run so I have to think a bit more tactically as a mid-pack wank]. The third just below race pace effort. I finish up with a bit of quiet stretching contemplation. I tend to find somewhere away from the adoring fans in order to channel my inner spirit animal. That’s my plan at least, it doesn’t always work out that way.

Gridded in the second row [it pays to be in the SCX brotherhood] today I was going to have to put in a big, big effort from the off to just make sure I don’t bollocks up everyone elses race at the first bottleneck. The course starts on the blacktop, sweeps 180 around the shallow berm to the right into a slow rutted grass lane and then turns 180 left over a crashbarrier (via a purpose built ramp) and then immediately up again for a short sharp dig to the top plateau of the course. The initial ramp into hill kills your speed so you need to be choice with gear and at the ready for any mishaps. This is also an ideal location for a cheeky brake-check. Safely through at only the third dead turn I and the rest were being gapped by the top 8 riders. Even if i did have that initial pace (which I don’t) I don’t have the best of dead turn skills so this was going to be the inevitable end of day out in the front pack. 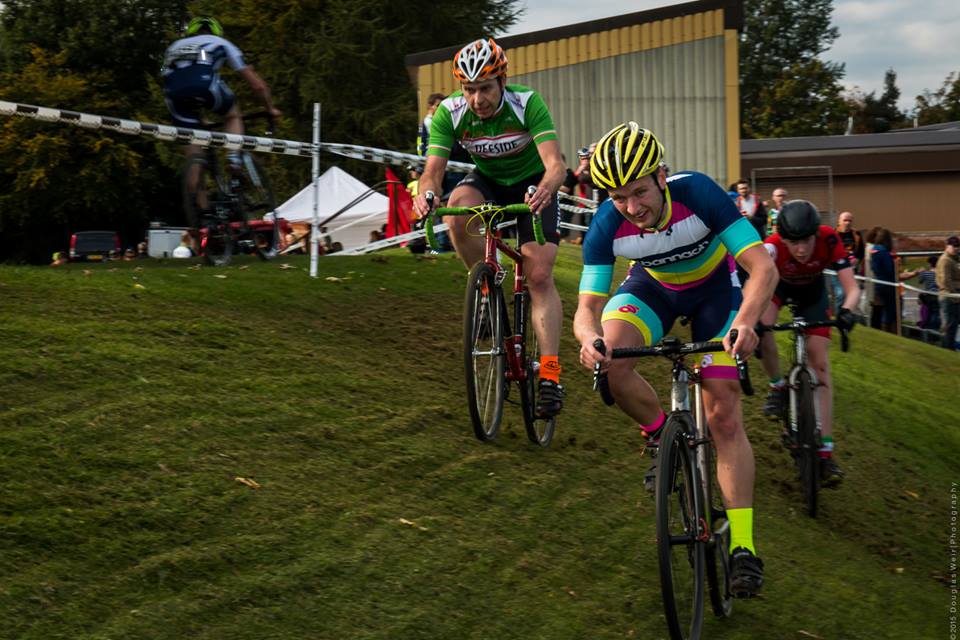 The race rolls through a few laps I check around on the ‘rest-secteurs’ for my close rivals only to be greeted with the ‘come one Jim’ arrival of #redisacolour Euan Lindsay. We roll together for a bit with a couple of DTCC guys and a young pup from ERC. The double ramp is coming up and I need to be infront for it. If I can’t get infront I’ll sit back a few metres so that I have time to react and run around any potential fumbles. We are all smoothly riding the hardpack grass and blacktop sections and turn back onto the long slow-rutted section. I decide to hit it then to get to the front, I get through the double ramp cleanly but the following sections require the effort to be stretched out much longer than I would have hoped for. It works though and I’ve got a wee gap. 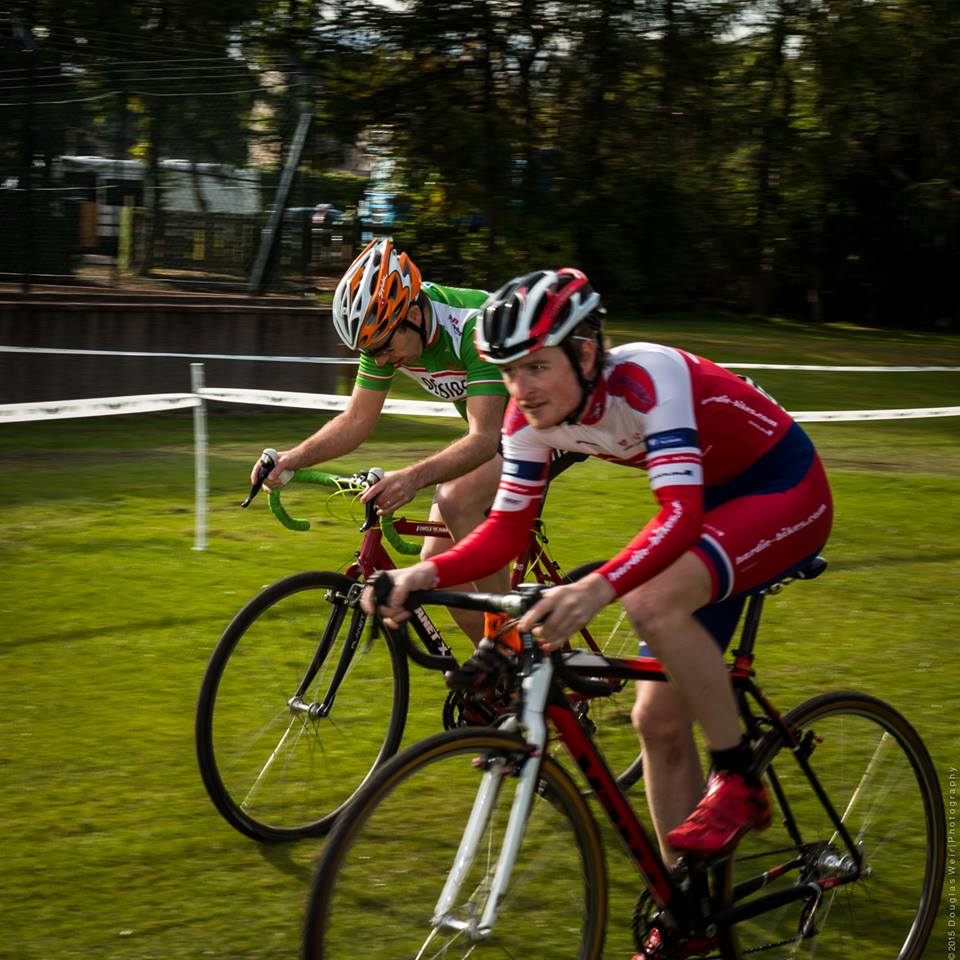 The laps are fast and the leading pack are way out infront. You could say I was chasing but really I was just the guy in the middle between our wee group and the leading group. I kind of lose drive at this point. I’m not going to catch anymore of the guys up front and I’m not really being chased by the guys behind me. That is until I take a tumble on a sharp berm/descent. I get too keen on the corner and my front wheel goes from beneath me leaving me in an embarrassing heap at the bottom of the descent. I’m passed by a couple of DTCC guys and the young-pup from the ERC. Adrenaline throws me back onto the bike before i’ve even checked for damage; my shifters are skew-wiff and saddle turned into the left. I’ve only got a few laps to go, I want to reclaim my previous position, my race is back on.

Alot of this course passes itself being very compact it also gives you plenty of opportunity to find your closest rivals. I find on some courses the lack of visibility leads to me cracking and giving up the chase. The fact you can sight them infornt or behind you really pushes you on to dig in and chase.

Back up the wee hill I just came off on for the long off-camber on the opposite side of the ridge. It was deceptively difficult. There’s alot of rutting at the top of the camber, so instinctively you head for that line, like a lamb to the slaughter. Time after time I get spat out and shot down to the bottom of the camber, slowly then having to climb out. This time however I was on the chase and just smashed through the middle with total disregard for the rut. It worked a treat leaving me wonder what all the fuss was about. 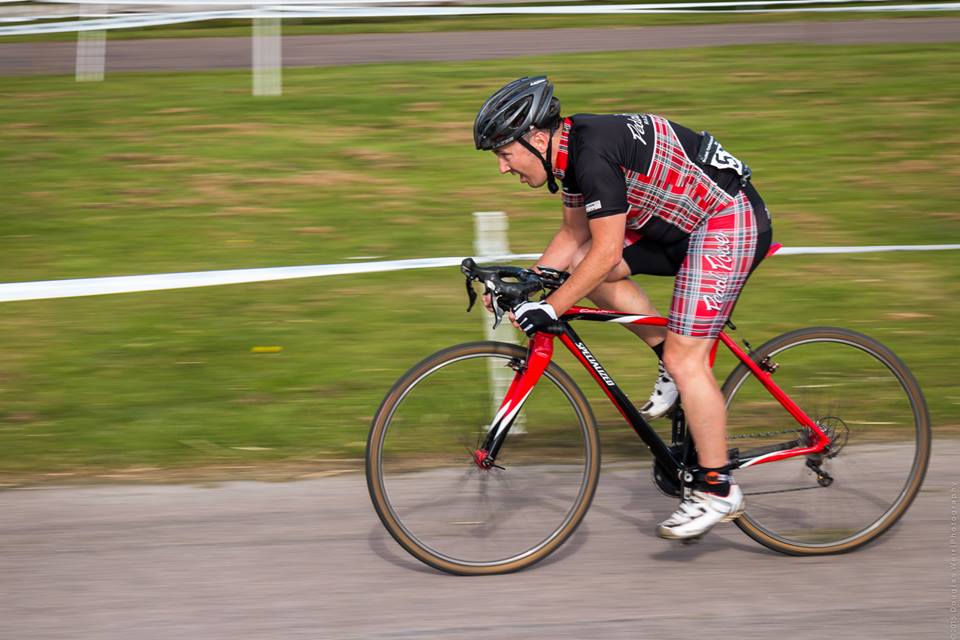 I chase on, with my targets in my sights, chipping away at their lead. I’m so close now though, I can taste blood. We come back around to the off-camber again and with confidence from the previous lap I try to smash through the middle again. My back wheel slides out, i’m guessing from forcing it too much with too much weight back and I slide down right out underneath the tape off the course. They take off again and I’m left to chase again. I’m starting now to catch backmarkers (don’t be offended, we’re all someone’s backmarker) and I use a few as drafting-stones, jumping across the gap my three targets. The penultimate lap I manage to pick them off one by one, they’re tiring and some of what I might lend to the TCR is shining through. No pace, but I can hurt all day long.

I roll in just ahead of Euan and sprint past JMC to at least claim the drive-home-bragging rights. This is the first time I think I’ve ever come to the ‘cross season with some glimmer of fitness. I usually just mince about the summer months hunting out sweet lanes and generally exploring with pals. Then come the ‘cross season I get frustrated that I tire so quickly. It’s taking a while to turn it into all out #volgas effort but i’m finding that i’m not fading as I once did. Hopefully come the end of the season I’ll be in full unicrois attack mode for the Super Quaich.

Thanks to the Deeside Thistle CC and in particular Gordon Watt for putting on a cracking race.

Next up SCX Round 1 at Cally Park, Falkirk – Enter HERE if you’ve not already entered!