The return of Plean

It is usually a good indication for you to stay indoors when the windscreen wipers are going at maximum velocity and the storm hitting the country has a name.

Instead, we were signing on at Plean Country Park trying to stay squarely under a deformed umbrella with layers of jumpers and coats hiding our SRACX kit. The marshals were upbeat and gave me no reason to suspect that the race might be cancelled. ‘Cross is never cancelled Jim said wisely, with a smile unique to someone who was not racing that day. I looked through the sheet of rain and took myself and the umbrella away to investigate the burrito bar. The kids were screeching through the corners whilst parents stayed warm and shouted encouragement, preparing themselves for their own races. 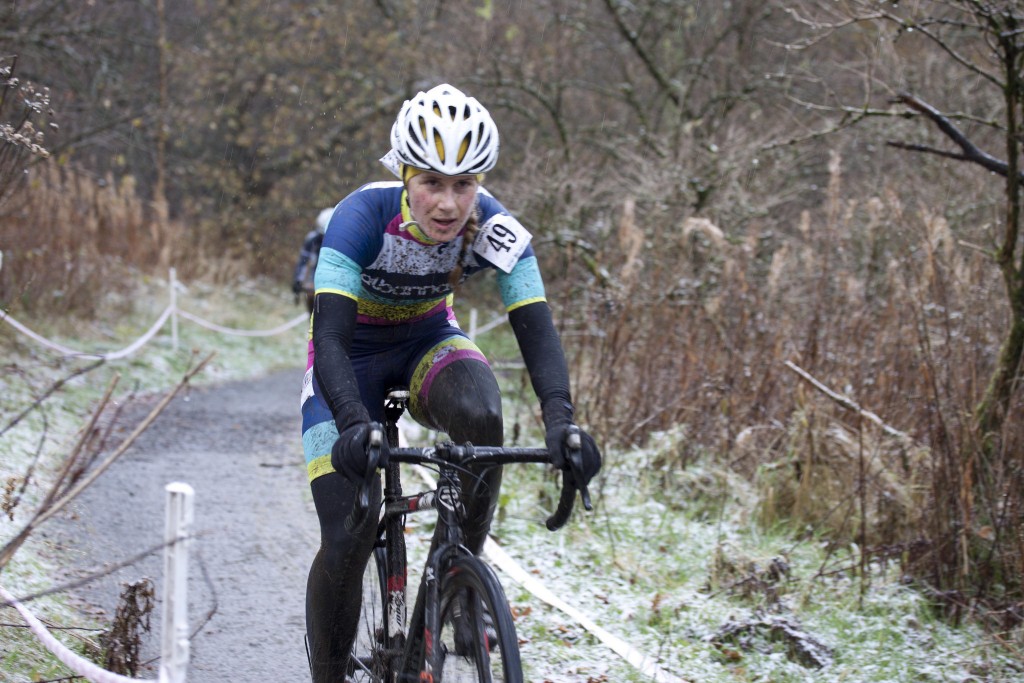 Time ticked on and it was time for the warm up lap; I did the lap in my wool and microfibre layers. After the initial insult of the first splash of mud and puddle through my shoes and socks I thought, ‘this is actually fine’. I guardedly thought, ‘this might be fun!’

At the start line the girls huddled together like penguins, nobody wanting to give up their coats as snowflakes started landing on our faces. The whistle went and we were off. After the first minute I was soaked, after the second minute I was unaware of the cold and just trying to keep up with the girls. I am new to off-roading so I took the first corner wide with a small *eep*. The muddy swamp that had made me get off my bike in the warm up lap came and went and I noted with delight that I was riding through it and I was OK with my bike swerving around randomly. Next obstacle; tree roots and mud. I hate tree roots. I tried to go to the left but a rider was on my left so I held my breath and went over the tree roots on the right. Nothing happened, I was over them and through to the other side. Up a long slope and I felt fine, in fact I felt great, so I juddered over the bumpier side of the track and overtook some riders to celebrate. This was a highly unusual race strategy for me. Then we hit some tarmac and I was on familiar ground so ramped up to my biggest gear and sailed round the corner back to the start. This is much better than walking round the shops or going to the gym, I could not help thinking as I swerved into the corner, got covered in a fresh layer of mud and started climbing. 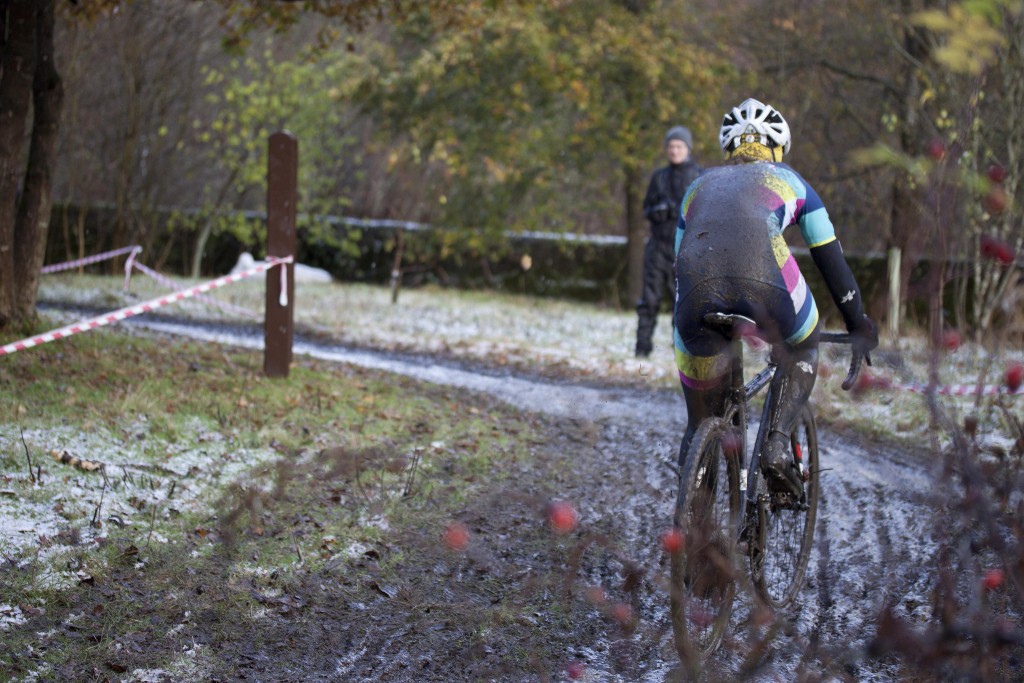 As the laps went down I got more and more confident and started taking the corners tighter. The mud swamp was now approaching lentil soup and I noted with satisfaction that going through watery mud was infinitely better than thick mud. I hope it keeps raining. I became aware of the fact that I had overtaken some people and could now see Rob Bloor (Edinburgh RC) in the distance. This was not a normal occurrence, usually he would overtake me and that was the last I would see of him until the finish line. So I pushed on really hard and went past him with a “hi Rob” to highlight that it was indeed me. Of course my lead did not last long but I enjoyed it while it lasted. 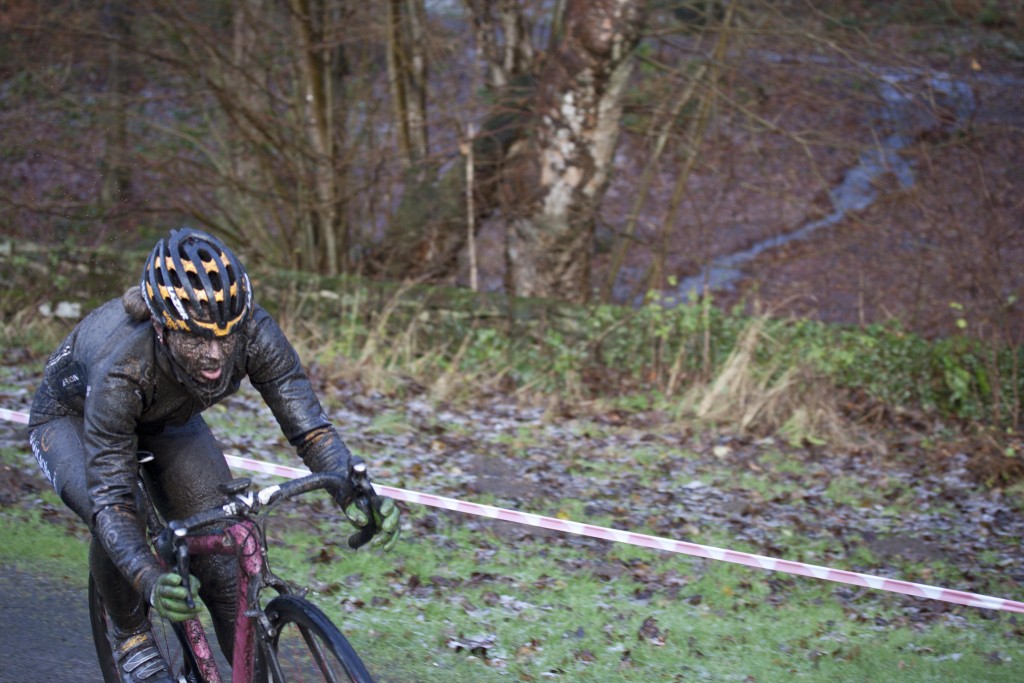 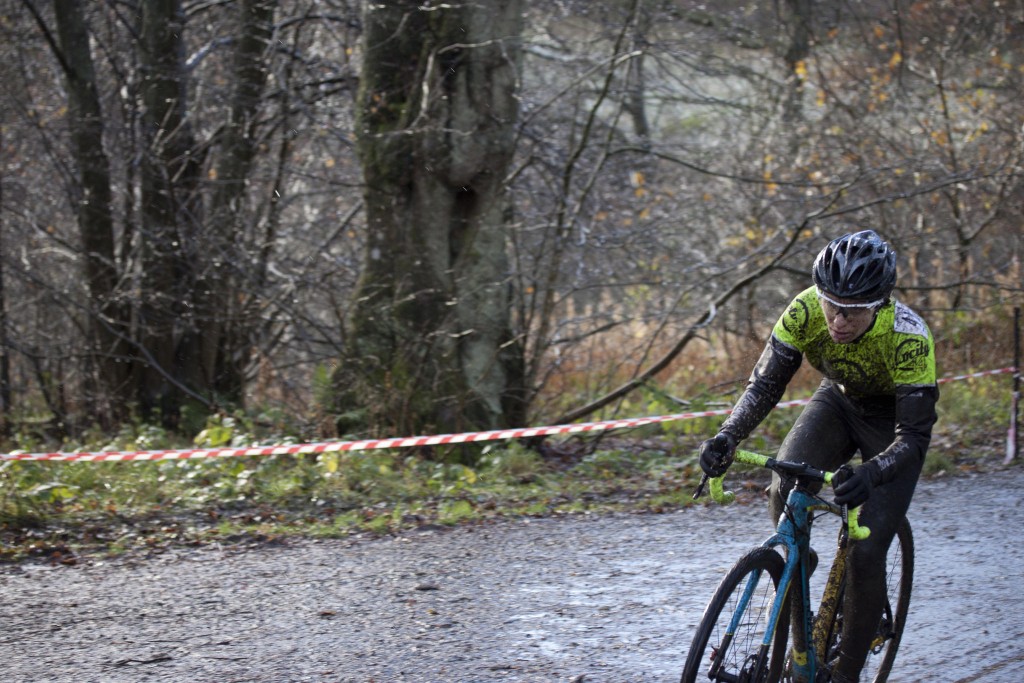 The barriers were well attended by supporters, watching the power-slides, falls and wobbles. As the race went on, the mud in the lead up to barriers became slicker and I, less so. The marshals and supporters shouted support and gentle abuse and I could not stop giggling as I skidded up to the barriers ran through the thick mud, enthusiastically jumping back onto my bike only to provide the crowd with a nerve biting second of ‘will she, won’t she’ as I balanced on my saddle trying to find my pedals. 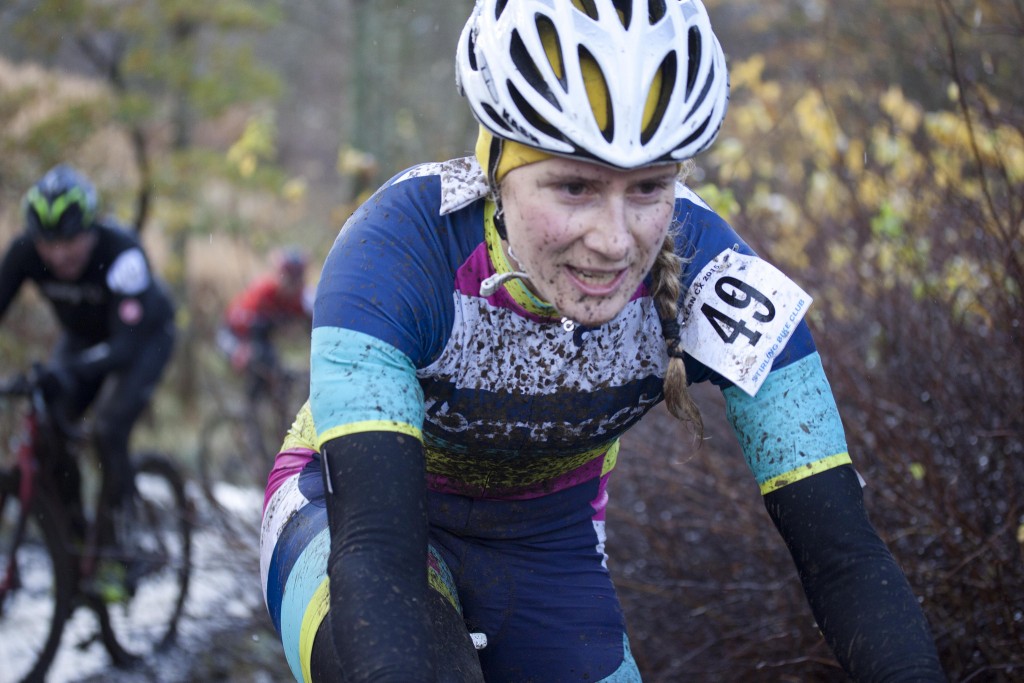 Despite the weather, all the SR Albannach crew, marshals, supporters, finished riders and waiting riders were out. Cheering, cowbells and klaxons came from behind camera lenses, under bushes, behind trees. Sometimes I had no idea where it was coming from. I could pick out familiar voices telling me to keep going and that I was going well. The last lap bell sounded. The slopes that had been manageable at the start now seemed never-ending, steeper and covered with a layer of denser mud. I saw the chequered flag in between the army of SRACX bobble hats and jubilantly crossed the line (with both hands on handle bars) a respectable placing of 5th girl. 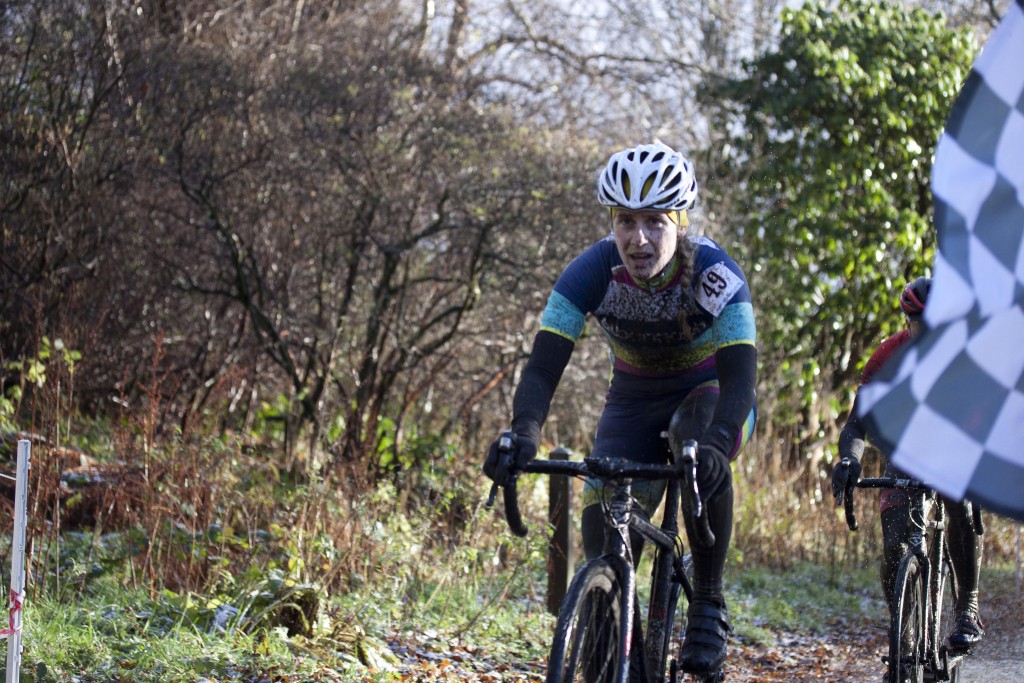 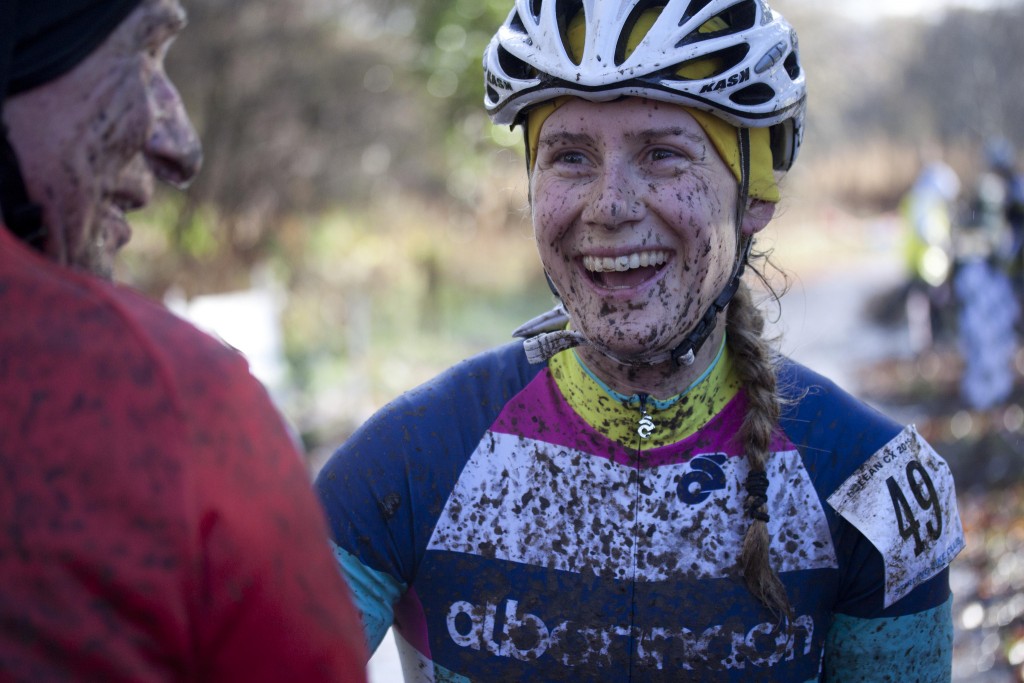 What a day and what a race. I walked straight into a warm cup of tea, a burrito, a coat and my own bobble hat. “Hey, I enjoyed it!!”, I told the shivering finish line supporters. “ Do you think I was racing?”, “ do you want to hear my debrief before you start?”, “you are going to love it guys”, “its not cold at all”, I chattered in between mouthful as I was shepherded back to car and placed inside under a pile of towels and clothes with all the hot air vents trained on me. What a great decision to come out of the car and do Plean CX. A great way to get into cycling, avoid cars, get the whole family involved and get active over winter. The whole scene is so friendly  and welcoming. 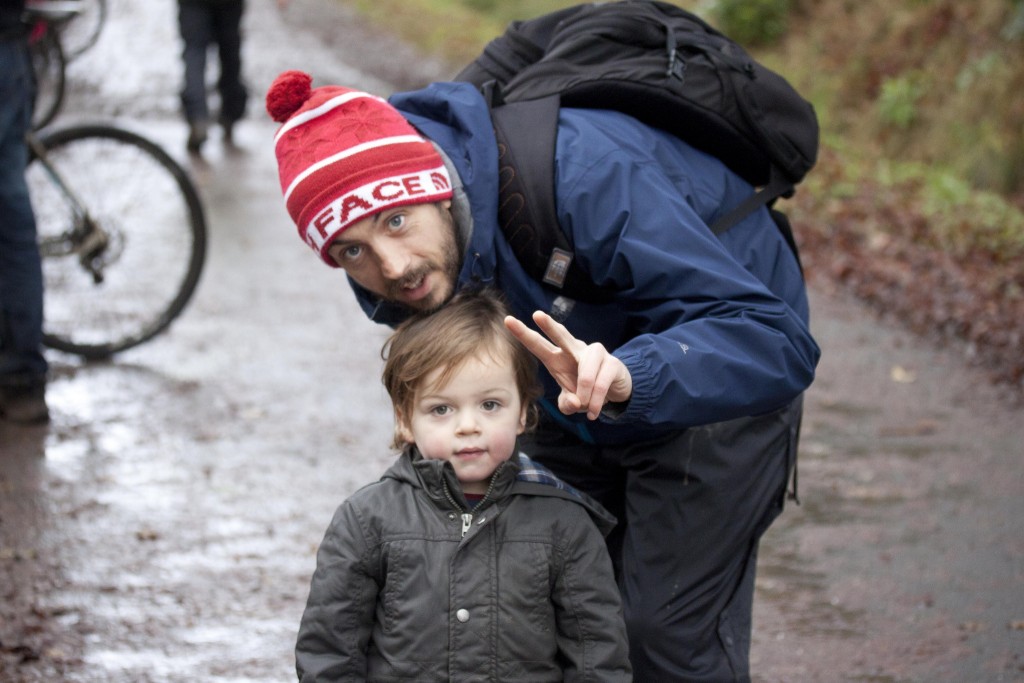 I will definitely be signing up next year, hoping for rain.

Thanks to Rae for her account of the return of Plean. A very different course since the last outing at Plean Country Park and by all accounts ‘much more cyclocross’ as courses go. I hope it returns again next year, hopefully with the parking restrictions lifted to maximise entries #scxrevival

Sadly I opted to save myself from infection of my fresh skin fashion so I went along to Plean with my camera at the ready. Have a swatch at the gallery and feel free to use however you like. 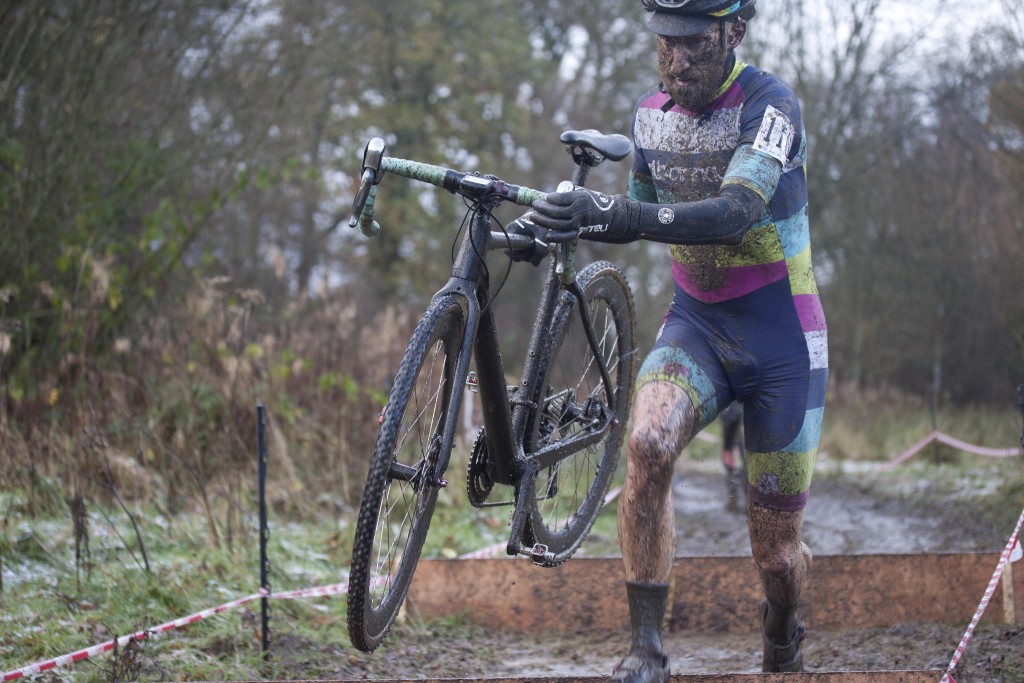 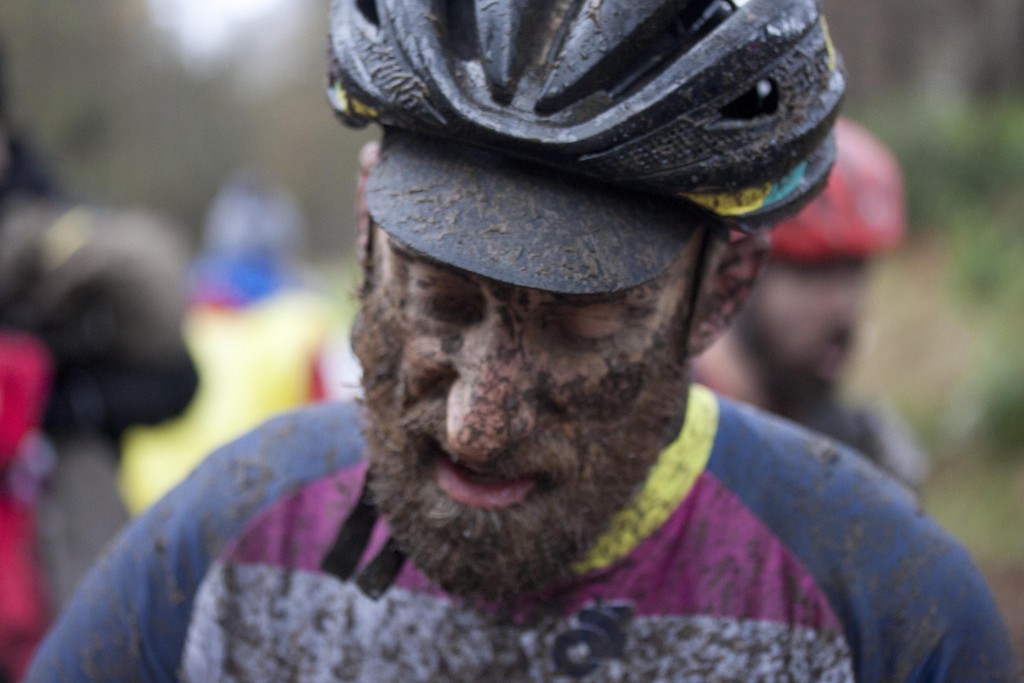 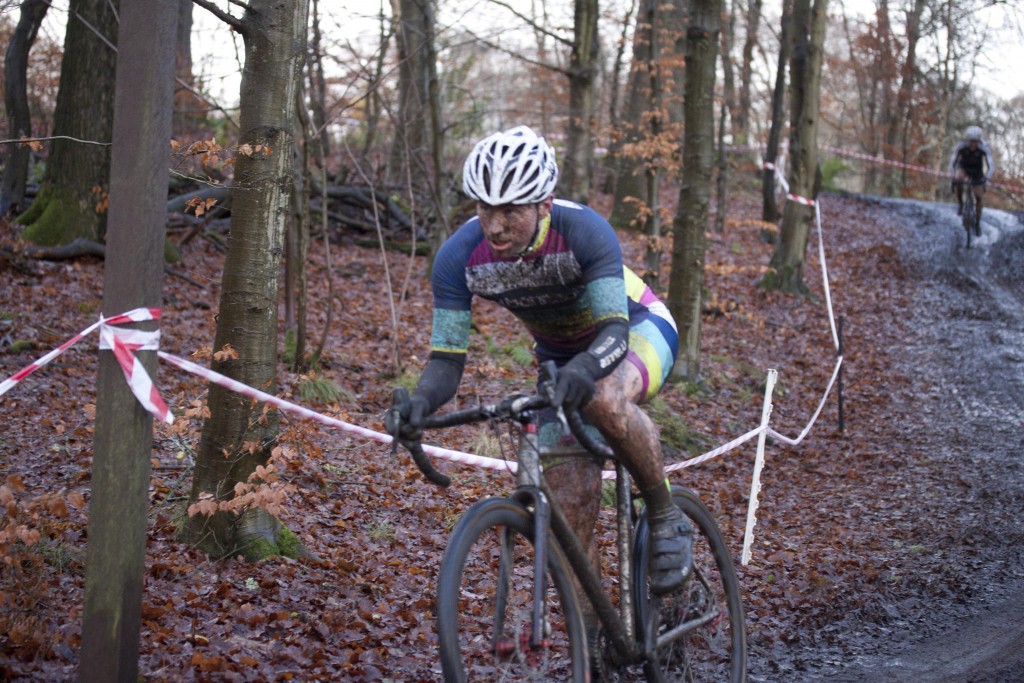 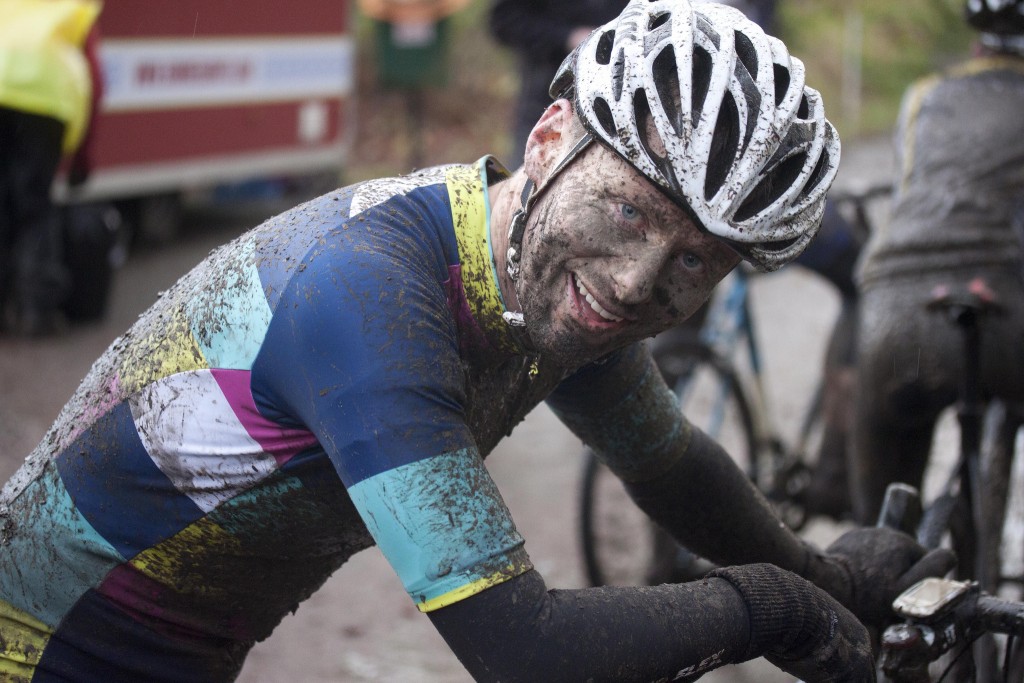