Being a delusional optimist I had glued myself to the weather forecast all week hoping that the deepening Atlantic low that looked set to unleash itself on Strathclyde Park on Sunday would somehow, miraculously, take a sharp detour! Sadly Sunday dawned as did the monsoon.

As it was Remembrance Sunday, the course organisers had done their best to ensure that we could get a feel for a soggy Flanders field just south of Glasgow. Suffice to say you could have hidden an entire infantry battalion in some of the puddles that were forming in the start straight. 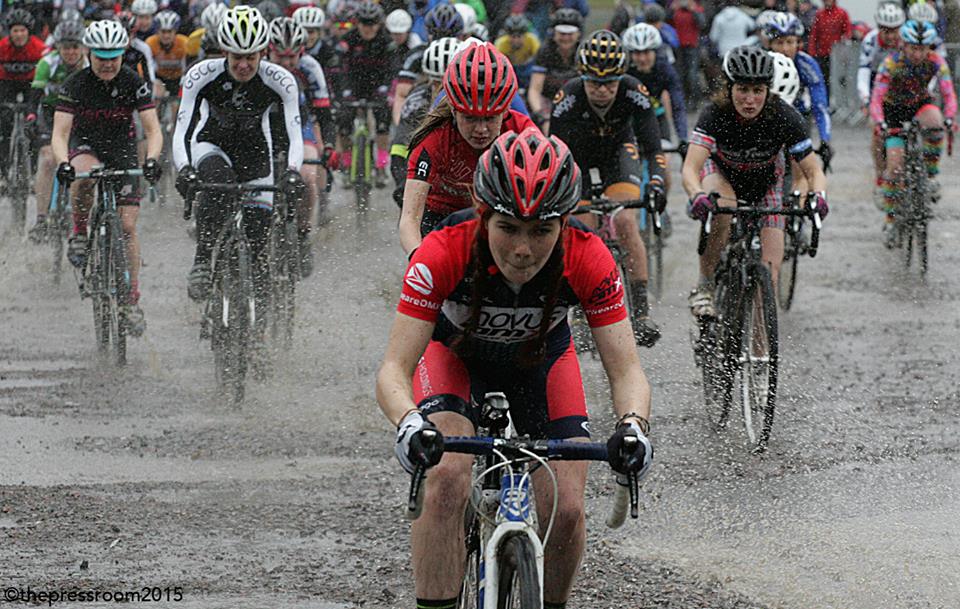 Despite the deluge and strong winds the kids were out in force first thing and they seemed to be revelling in the opportunity to legitimately get filthy without their parents telling them off. It is fantastic to see so many kids having a go at this insane sport, it’s a real testament to the family friendly nature of cyclocross that it can be considered a day out for everyone.

As a woman it’s always nice to see a good field of other ladies to race with and I was truly heartened to see that the women’s race took up four lines in the start grid, that’s awesome I don’t think I’ve ever raced with so many women. 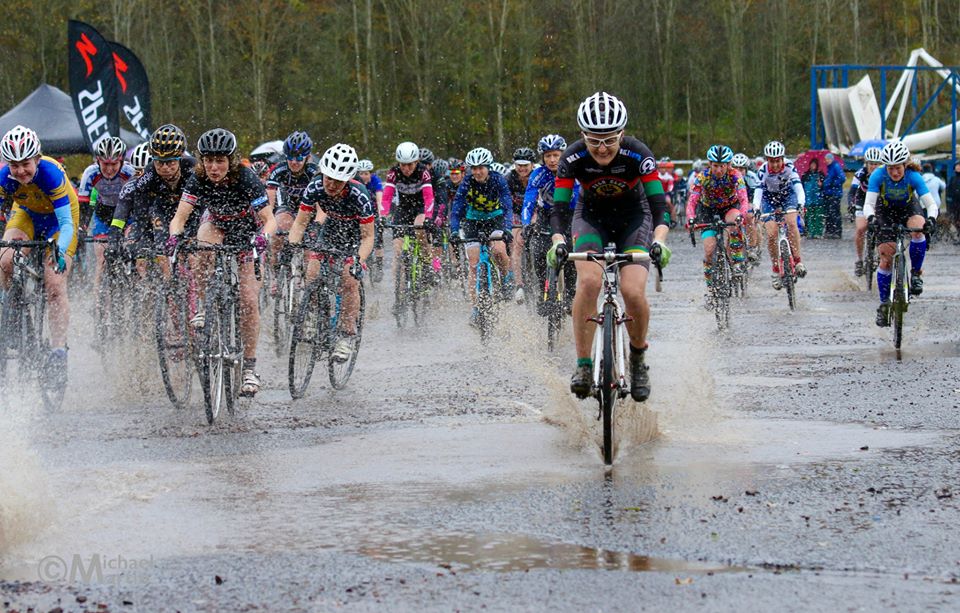 It’s also great to see so many girls having a go across the age categories, in total there were just under 100 women and girls racing on Sunday. Having raced across a number of cycling disciplines I can tell you that this is a brilliant validation of the inclusivity of the cyclocross scene. Chapeaux to everyone who makes that possible from the organisers to the guys we race with, also to the women who truly encourage each other whilst being fiercely competitive. 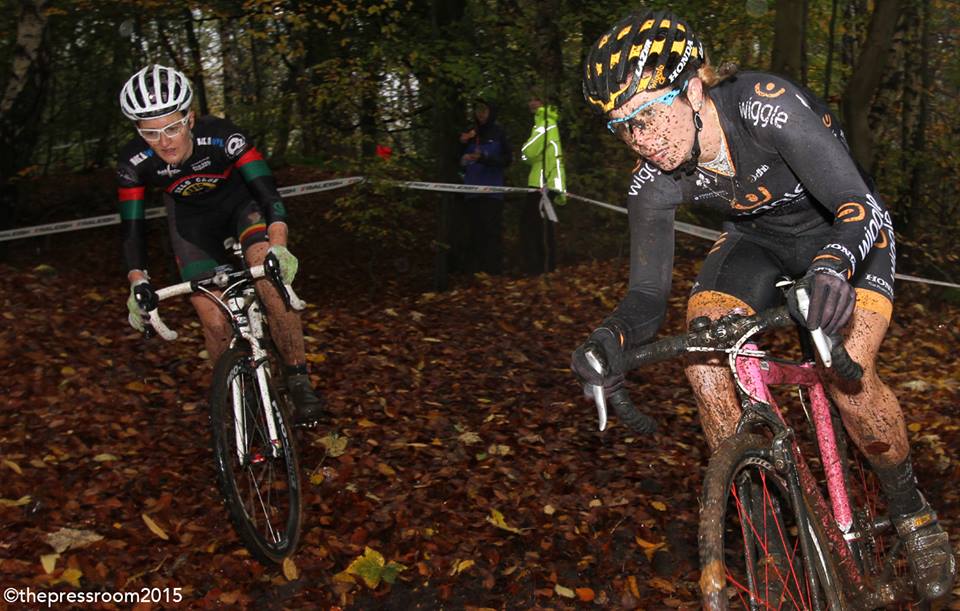 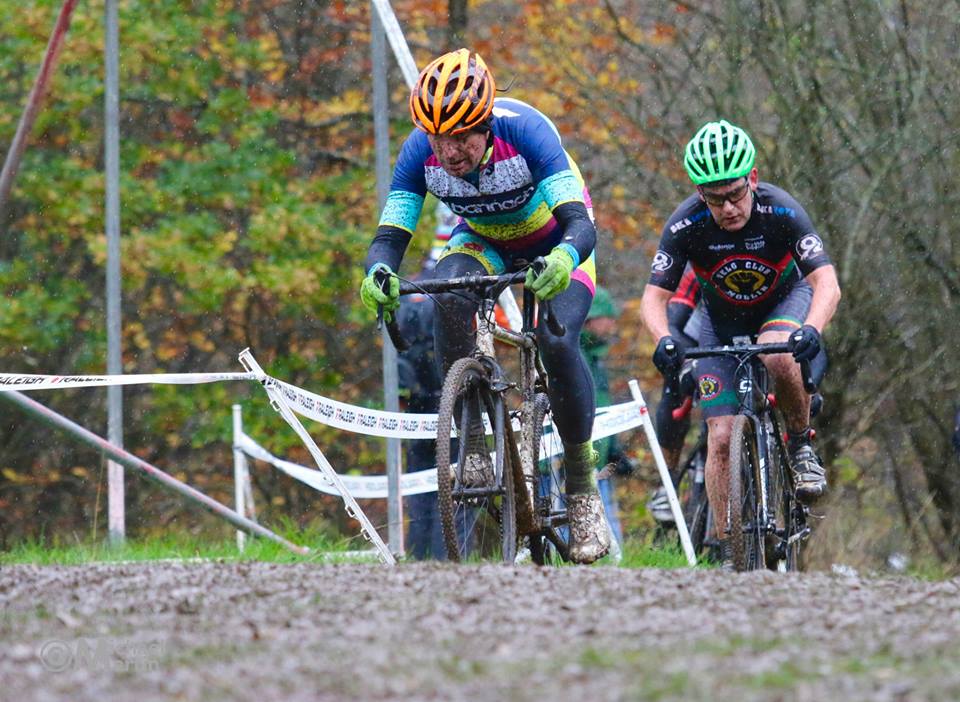 The course was a stoater to be honest and after practice lap (well a partial practice lap, I couldn’t keep up) with the king of cross Jon McComisky (SR Albannach) I was quite looking forward to it, well apart from the hill! Even the running bits were good, my extra-long mud spikes proved very useful on the bridge run up which was very slippy indeed. With a good combination of mud, grass, roots and hard paths there was something for everyone, even a hill, did I mention the hill?! 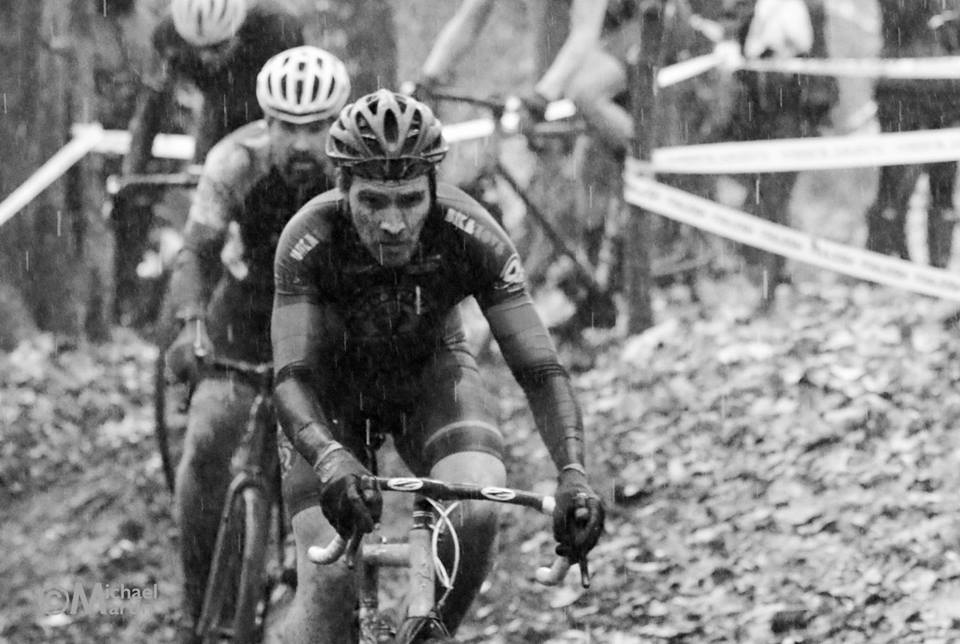 So to the race! With the better part of 50 women on the start line it was going to be a fast and furious start for the first muddy corner, off went the whistle, and off flew the field through the giant puddles in the start straight. As we approached the first sharp left hander onto the grass the whiff of brakes was in the air, but everyone made it round in one piece and onto the grass. 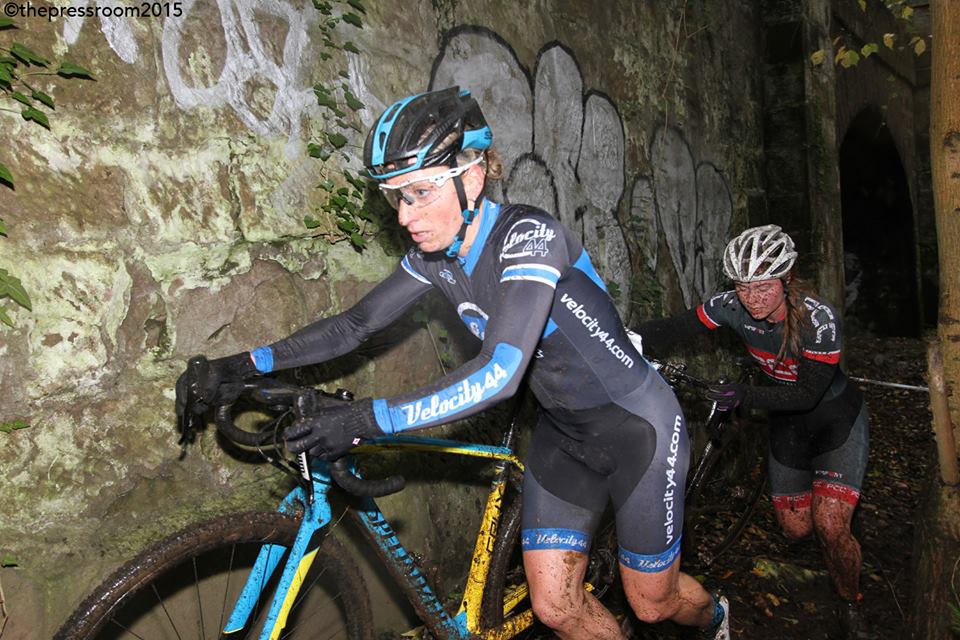 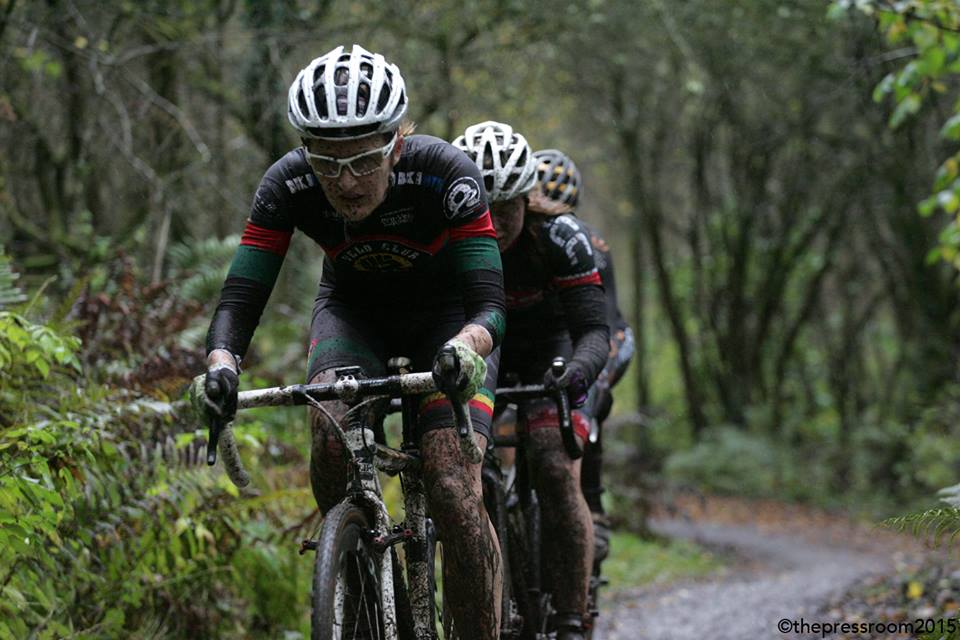 The muddy grass was leg sapping and this allowed the field to string out a bit, it strung out further as the first steps and then the hill came into play. It was around the top of the climb that the Vet 50 leaders caught up with me and disappeared off into the distance. 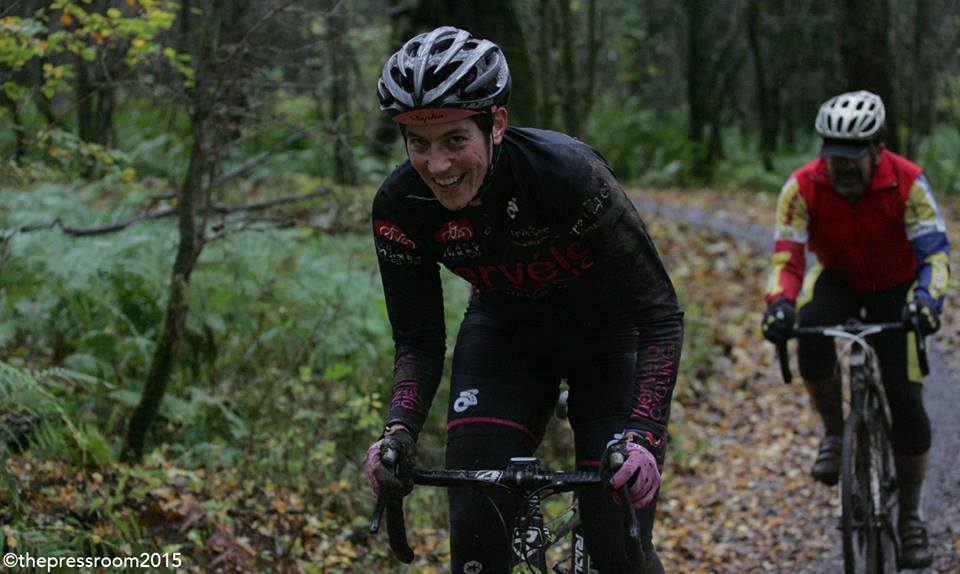 So all was going well and then it wasn’t! Clearly somewhere along the path I had forgotten I was riding a ‘cross bike with tiny silly tires not the enduro bike and I believed I could indeed ride across that piece of off camber mud at speed whilst turning. NO, no I couldn’t. 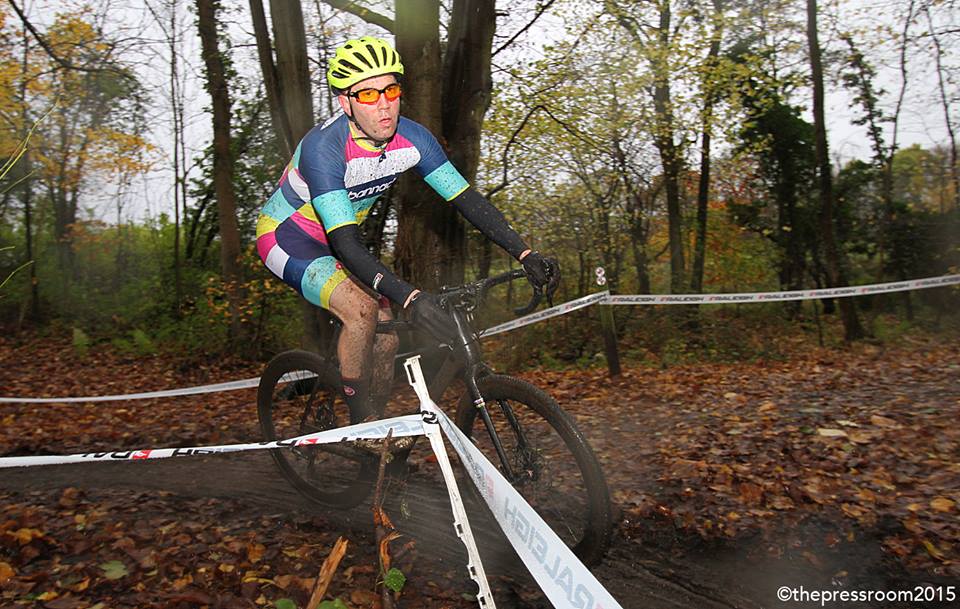 This moment of complete stupidity resulted in a head plant into the bushes and being passed by nearly the entire field. Once my head had stopped ringing I decided that I would keep going and finish the race and I’m glad I did. I managed to catch up with a few folk that had passed me, and had a lot of fun taking on the big tree root corner just before the track came back into the car park. 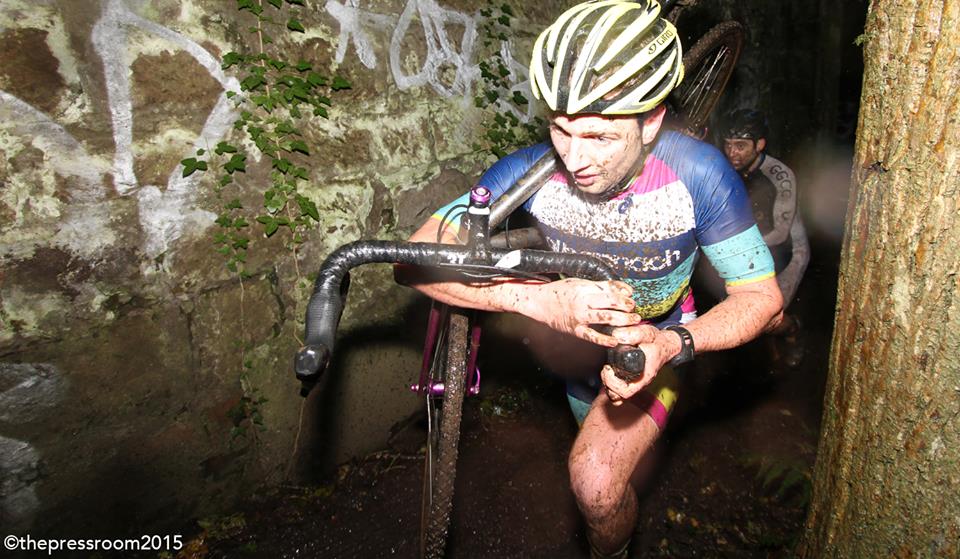 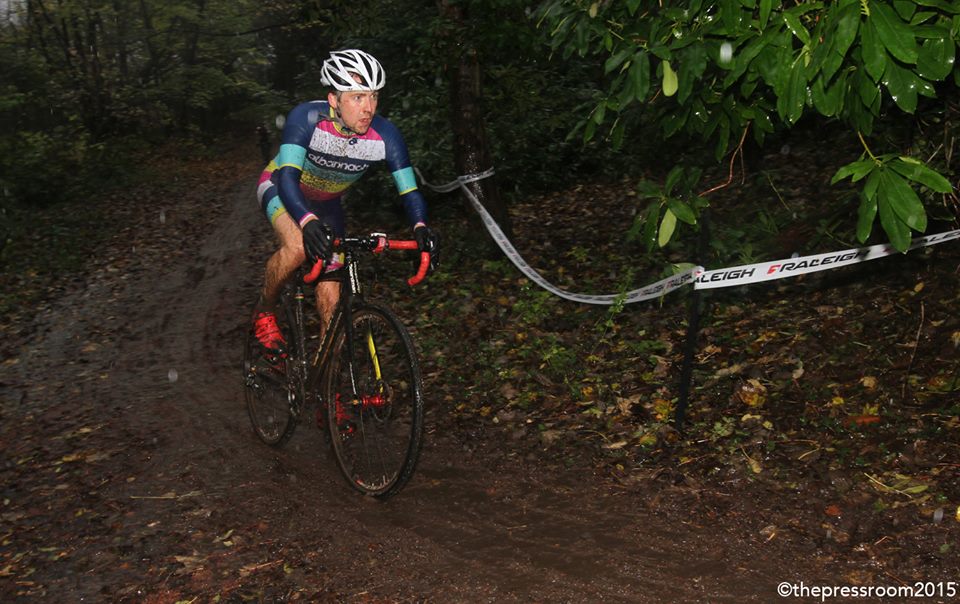 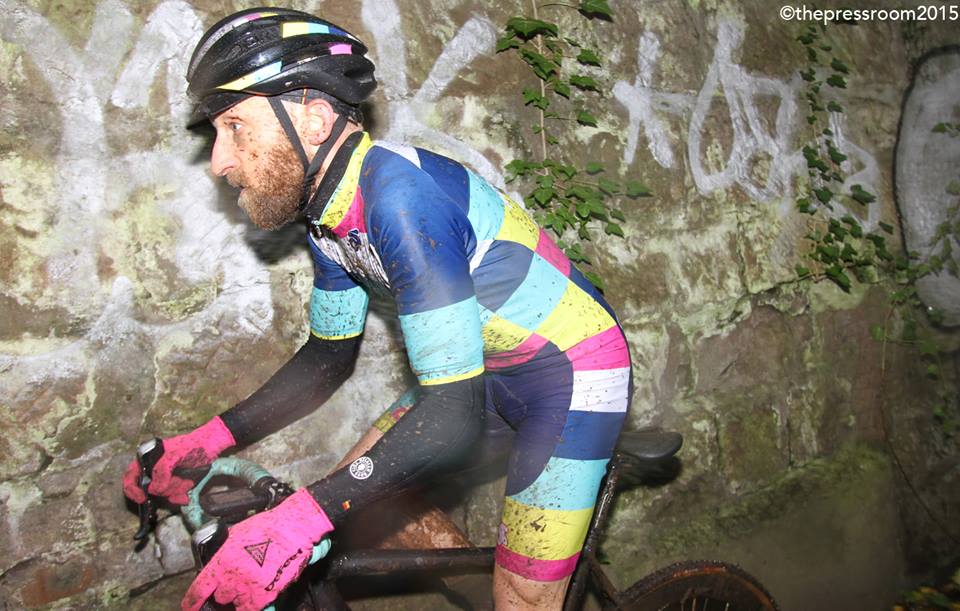 The junior men led by the flying Conner Johnston (Leslie Bikes / Bikers Boutique) were hammering round and lapped me at least twice, each time courteously giving me a shout from a distance so I could give them room. This is also true of everyone else who passed me, the lead women, the lead Vet 50’s, the junior women, I get passed by a lot of folk.

The leading women weren’t hanging about either and it was Lucy Grant and Eileen Roe who came ripping past me with one lap to go, hot on their heels was Maddy Robinson. That’s how the podium finished for the senior women, the junior women’s race was won by Louisa Watt and Brenda Callendar took the top spot for the Vet women. 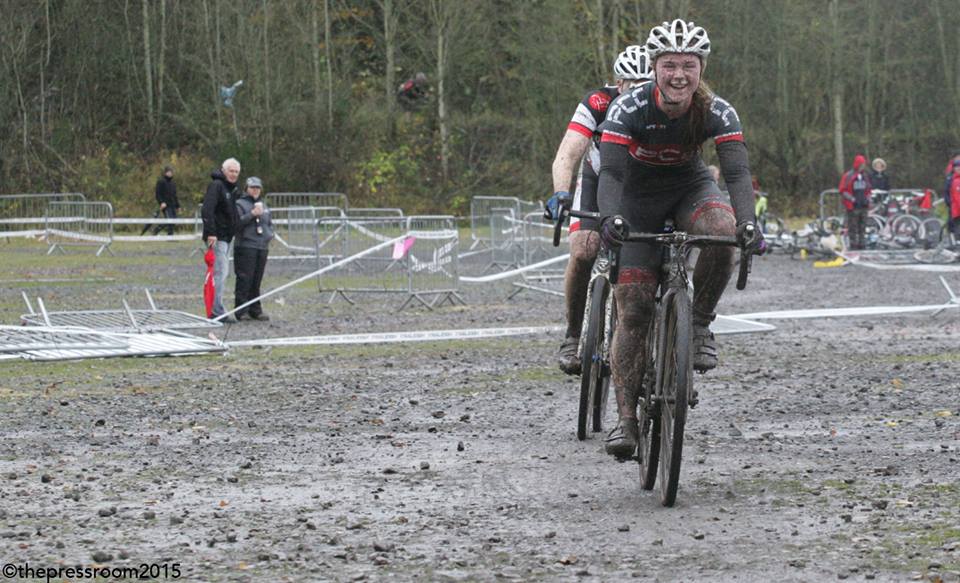 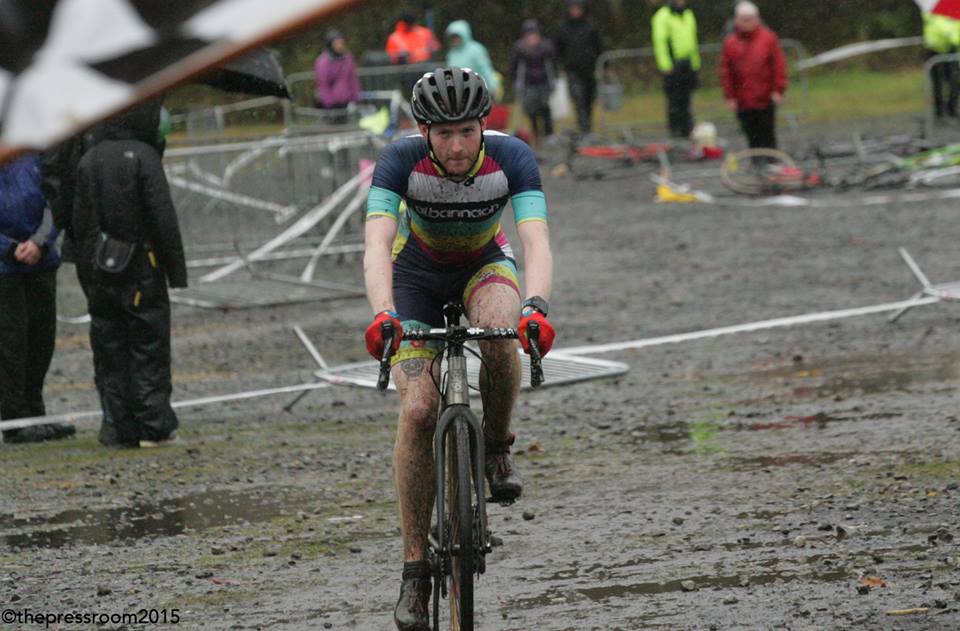 I’m afraid I didn’t stay to watch the Vet 40 or Senior men’s race so wasn’t witness to Chris Barr’s (RCCK) spectacular off in the start straight, the photos on Facebook told a story of mud, rain and more rain. Well done to the racers, supporters and marshals for toughing it out on a pretty wild day. Congratulations to Gary McCrae (Leslie Bikes / Bikers Boutique) and Harry Johnston for the wins in the Vet 40 and Senior men’s category. 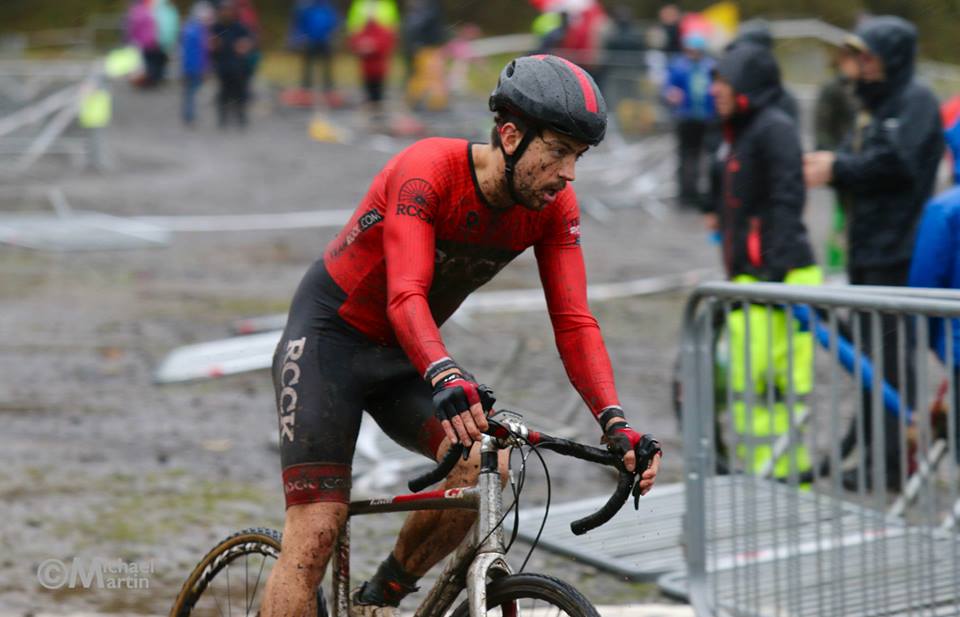 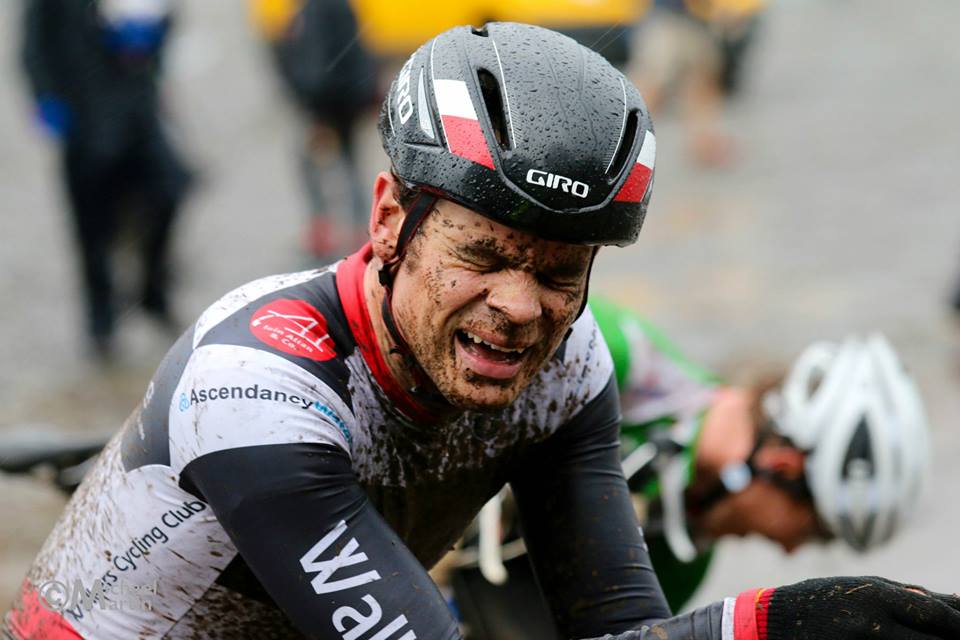 Well I may not have had the best race of my life but I can honestly say that I would race at Strathclyde Park again, it wss great, and the variety of terrain makes for a really interesting course with plenty to keep you on your toes. 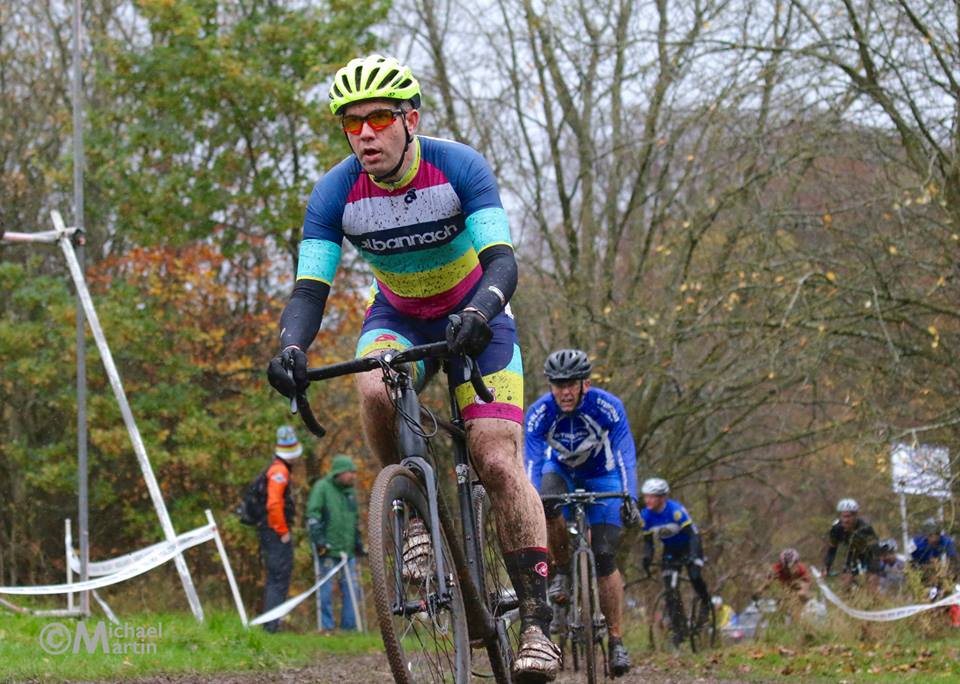 Thanks to the EKRC for doing such a sterling job on course layout and keeping the racing going on a truly wild day.

The next round in the Raleigh SCX Series sees our intrepid crossers heading to Lochore for Meedies Madness, if the spiral of mud filled doom is in it again there could be a collective decent into madness! Maybe we’ll have dry dusty conditions for that one, there speaks that delusional optimist again… 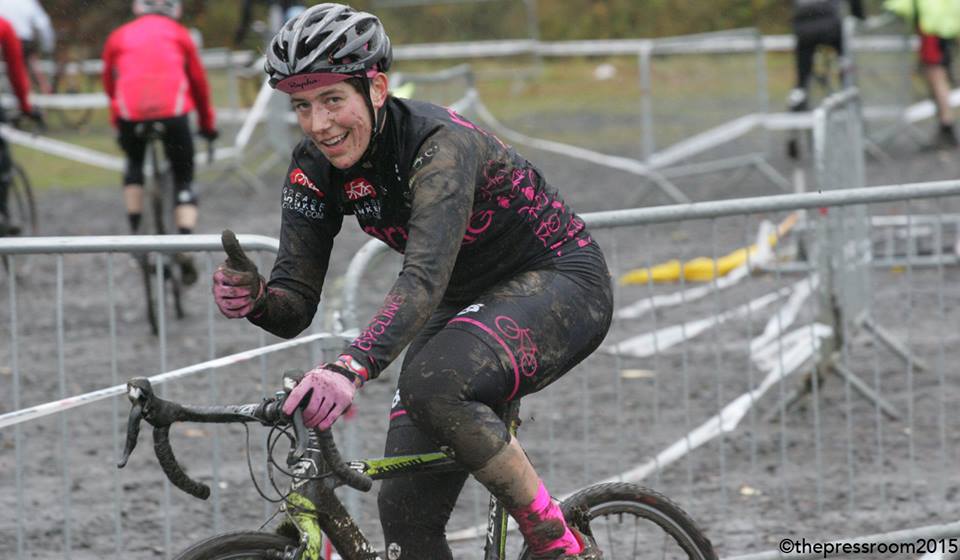 Thanks to Nics Johnson for her reportage. It’s so good to see so many ladies turning up to the races, SCX3 proving to be the most interesting races of the day with so many of the country’s top racers battling it out. I personally can’t wait to see more battles. I hope they can all make it to RGCX in January.

Thanks also to Mark McGhee at the Press Room & Mick Martin for a lend of the photies.

Here’s the results from SCX3 at Strathclyde Park

Next up is SCX4, this weekend at Lochore for Meedies Madness getting smelly in Lochgelly. 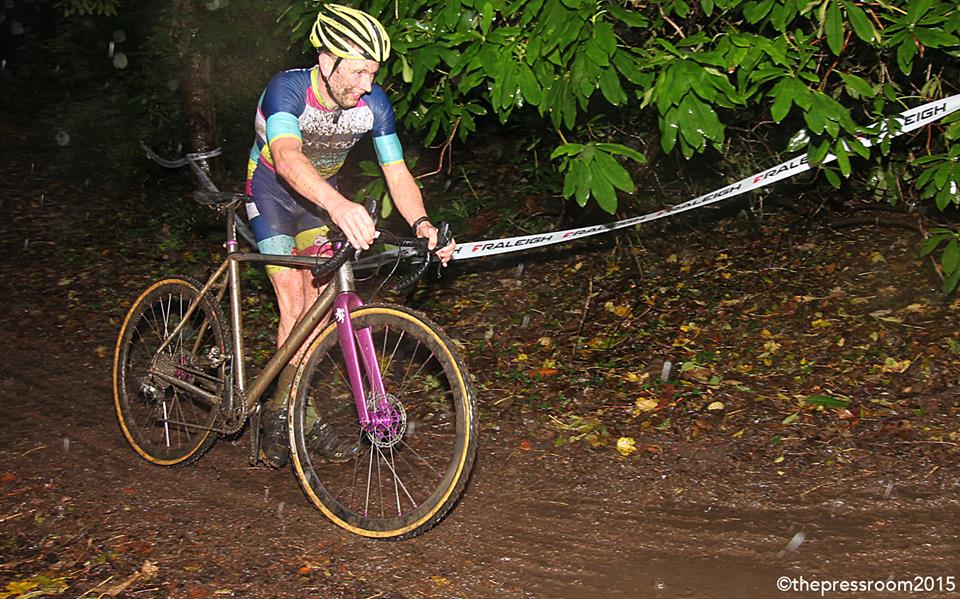 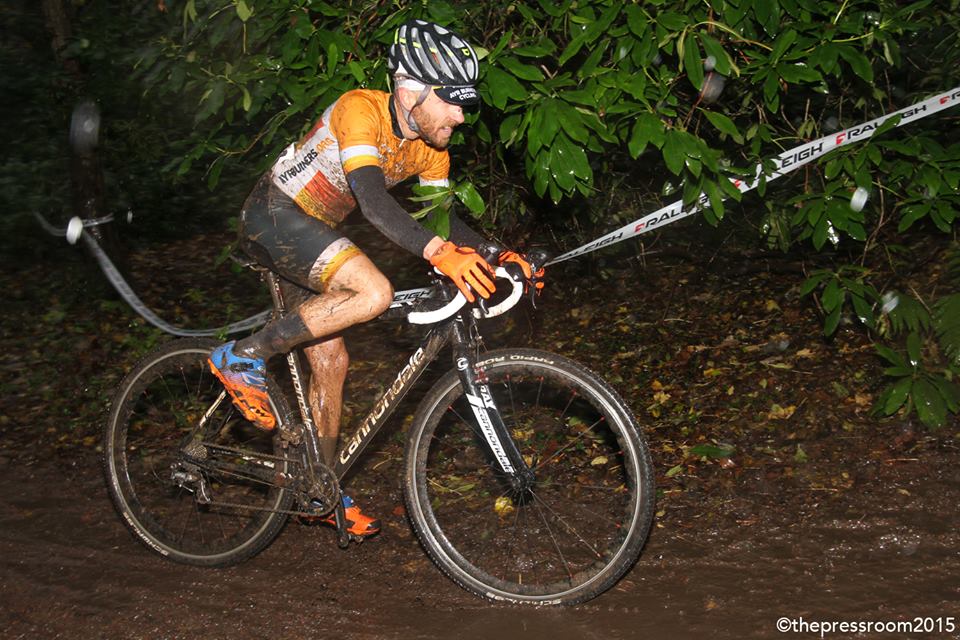