With one race under my belt from BPGP I was still nervous when arriving at Balloch Castle Country Park; working out what I was meant to be doing before the start of the race.

With the obligatory “nice bike” from a few guys that I’ve come to expect from my Albannach dCROIS and even one nice chap stopping to have a chat and stroke my top tube (easy…!), I went out and did some recon of the course. Fast, dry and similar to BPGP I thought. Where’s all the mud, sand and roots that I’d read to be synonymous with ‘cross? I assume it’s coming… 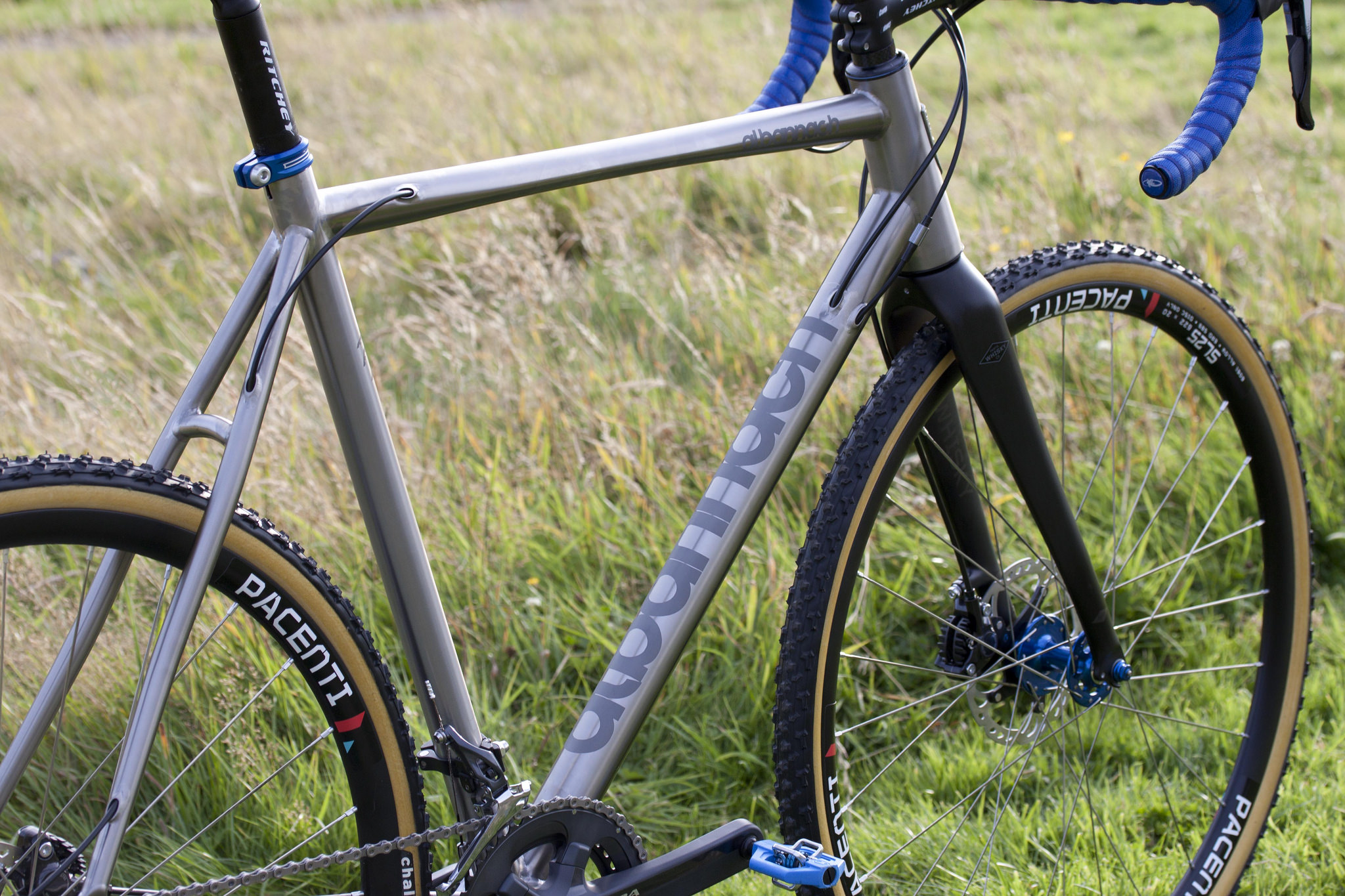 I’ve learned a couple of ‘cross lessons from Chris Barr (RCCK) even though I’ve never met him. First, he called me out on Instagram for having my tyres on backwards – might as well have ‘rookie’ stamped on my forehead. Second, in his BGBP report, he wrote about making sure to get as close as you can to the front at the start. Wise words indeed and in tribute to the man I’ve never met I lined up at the Battle of Balloch Castle B race behind two of his RCCK team mates as I thought they’d get off the line quickly and I’d follow them up to the front. They got off the line quickly; I didn’t follow them up to the front. 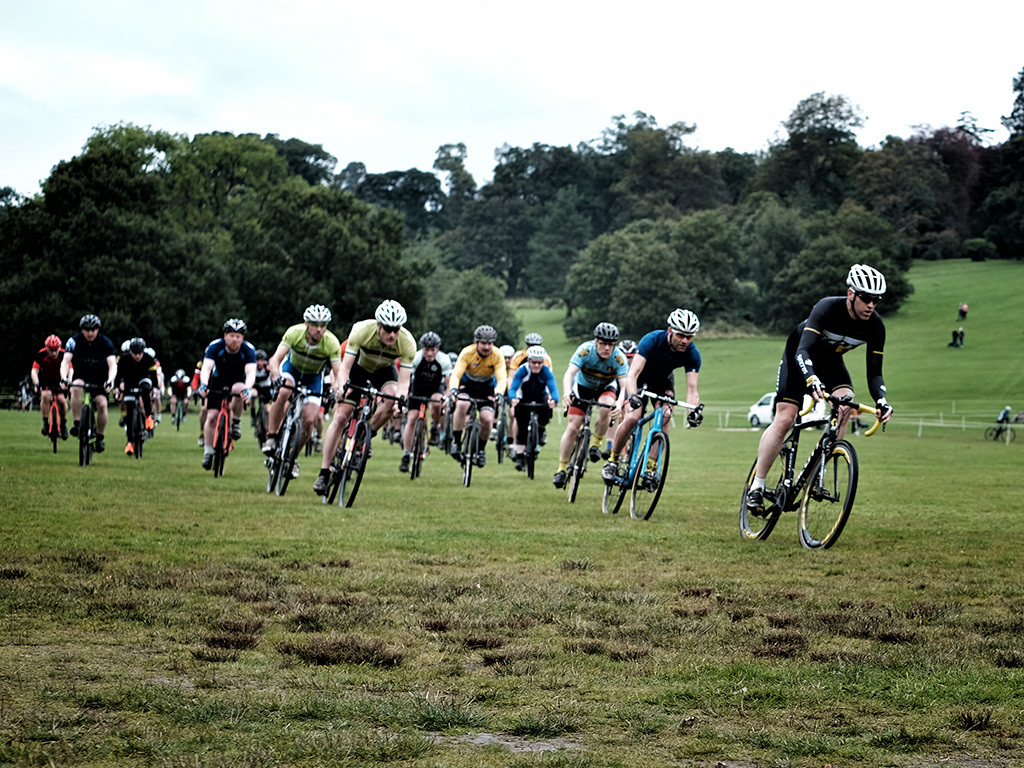 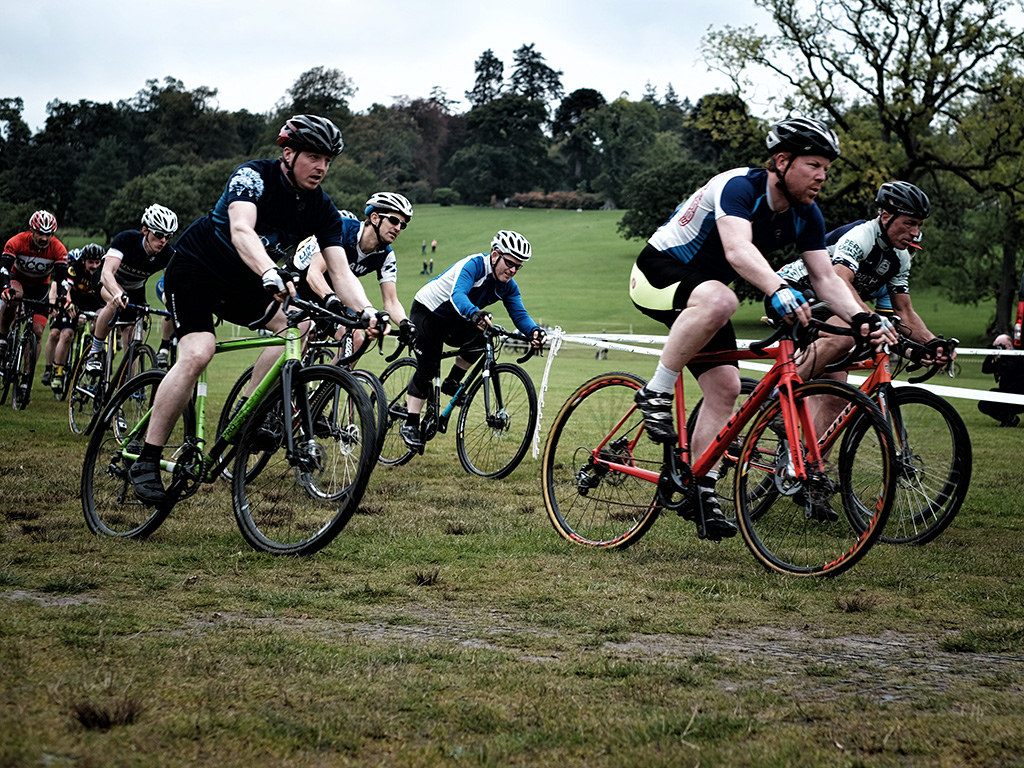 Struggling to clip in (this becomes a theme) I make it up in my sprint and launch for the small opening into the course and I realise I’m somewhere in the top 15. I was feeling pretty good and thought I could keep the pace.

On the run up past the castle’s walled garden the guys ahead of me lined up to the right to avoid a raised drainage ditch. Spotting an opportunity, I pulled left and hopped the ditch, taking 3 places and maintained my position up the hill and into the hairpin bends. All good so far – dig in!

I did a bambi-riding-a-penny-farthing job of getting through the hairpins but held off the guys behind me before I could open up the taps down the hill, through a bomb hole and onto the geo-block path bringing us back into the field where we’d started. 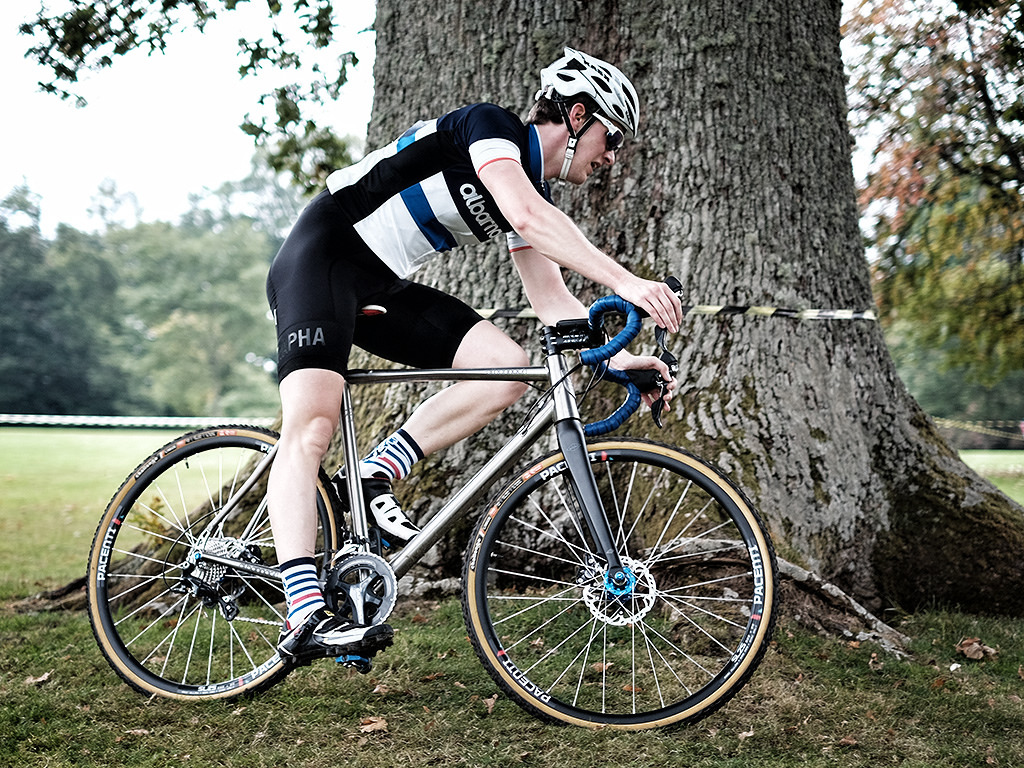 Another hairpin bend and then three hurdles gave my three places back to their rightful owners and a characteristically awful remount put me back into about 15th again.

I powered through the grass still feeling good and latched onto the wheel of another RCCK rider thinking I could stay with him for the rest of the race. I held the wheel for a lap and then decided to sprint past him on the geo-block and do a turn on the front for while. This went well for about 30m before the damn barriers came up again and I fumbled a remount, lost my place and couldn’t get back on his wheel.

I knew there was a reasonable gap behind me but was also conscious I’d have to put a good shift in on the straights if I was going to fanny about on the corners and barriers.

I held my position for a while but I started to drop on lap four and found myself in a bit of a no-man’s-land for a while with no one around and my mind starting to wander. I heard my rear disc starting to drag, it was slowing me down but with half the race to go I didn’t think there was any point stopping to play about with it. 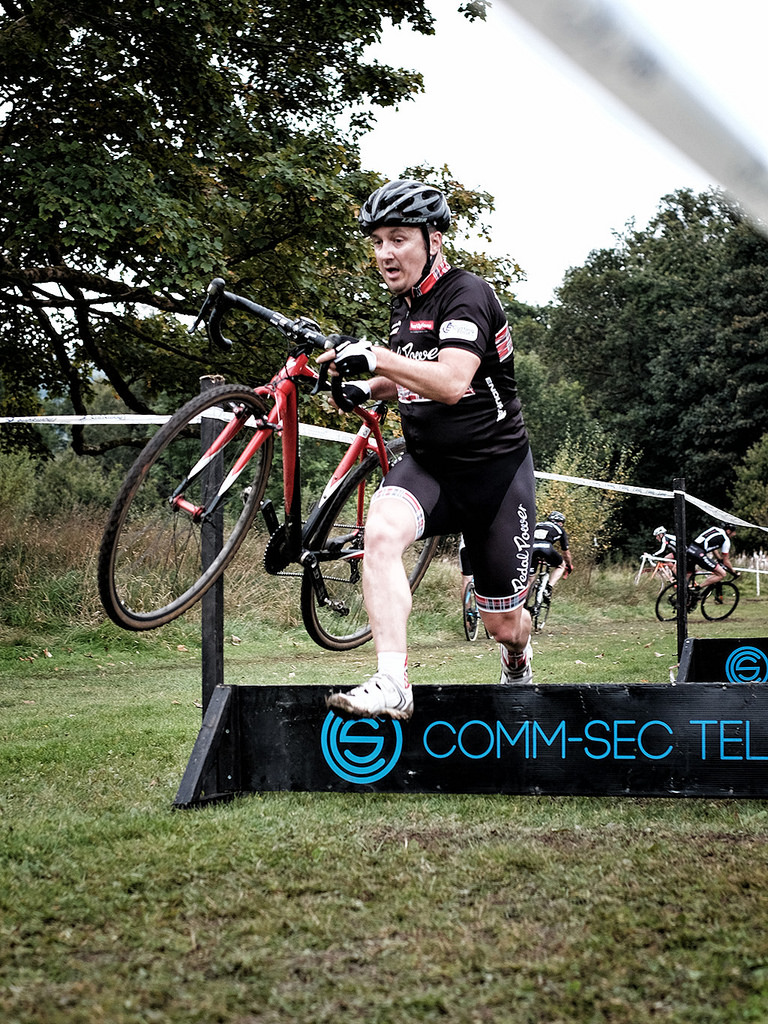 I could see the guys behind me making up the gap. At the castle gardens and hairpin bends I gave away another place to someone much nimbler than me; Gordon Scott (West Lothain Clarion) in the 6th lap. My lack of ‘cross skills were starting to piss me off.

I launched myself to try and keep up, trying my best to sprint out of the corners that I’d fucked up andhold off the rider behind me. I lost another place to Gordon Dalglish (Happy Trails Cross Collective) at the barriers and raised my hackles as I heard the final lap bell ringing. 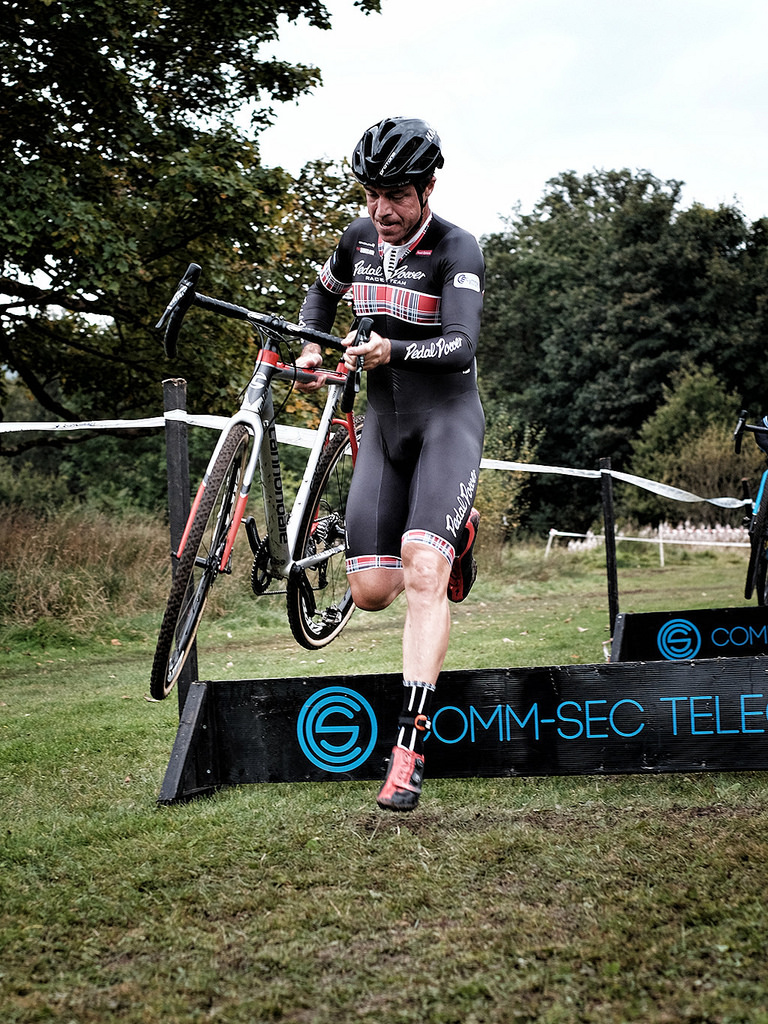 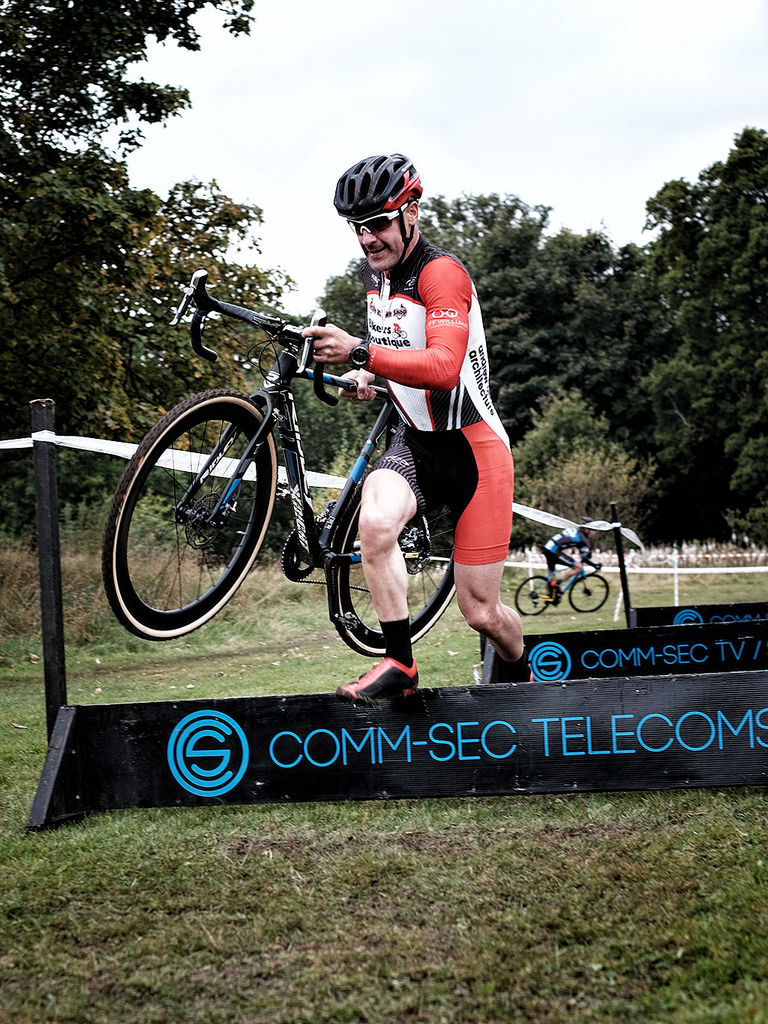 Knowing I needed to go all out to get back up to where I was I threw myself into the corners, slipping the back wheel out a bit and having to brake hard to not go through the tape. After following Gordon D tightly for the rest of the lap I got my place back on the geo-block and lost it AGAIN on the barriers with such a bad remount that I had to sprint across the line with only one shoe clipped in.

Taking a minute to stop myself from instantly vomiting, I shook the hands of the two Gordons I’d been chasing and went to find some water and to see where I’d finished.

Much better than my first attempt at BPGP (we won’t go there) but still mountains of work to do if I want to get anywhere near competing with the big boys. I’ve a lot of work to do on cornering and dismounts/remounts but I’m booked in for a ‘cross clinic with Dirt School in a couple of weeks so hoping that’ll sort some of my bad habits, or lack of habits entirely.

As a total newbie to the Scottish ‘cross scene I must say I’ve been welcomed warmly into the fold and thanks to those who’ve come to say hello and ask about the dCROIS. I look forward to chasing you all through the rest of the season.

Thanks to Mr Plaster, new cat on the course and loving ‘cross. Gie him a follow : i & t – @ @leoandthelion

Results from Battle of Balloch CX – First Skirmish | All Out War

There’s still time to get your entry into Cally Park for the round 1 of the Raleigh SCX Series. Entries close on Friday 07.10.15 – ENTER HERE